Editorial Team
8 min read
0 comments
Madman OG Strain Overview
The Madman OG is a potent strain with a sour, earthy and pine flavor. It is useful for addressing issues associated with chemotherapy and PTSD. It has an average THC level of 24%, though it some cases it can be as high as 34%! Newbies should toke low and slow with this strain. 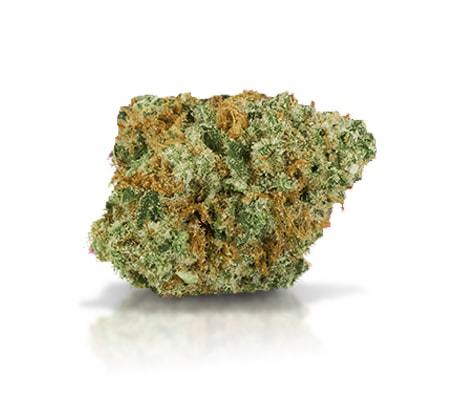 The name of Madman OG might be enough to put some people off, especially cannabis rookies. It could have you worrying about the strain being too hot to handle. In this case, the strain’s bark may be worse than its bite.

This weed does contain decent levels of THC, though, and should be treated with respect. That doesn’t mean newbies should avoid it like the plague – just tread cautiously. We would advise smoking up with an experienced friend.

Does Madman OG live up to its mad name? Is this strain one of the craziest around? Or would you have to be loony to love it? We look at everything you could want to know about Madman OG in this article.

What is Madman OG? 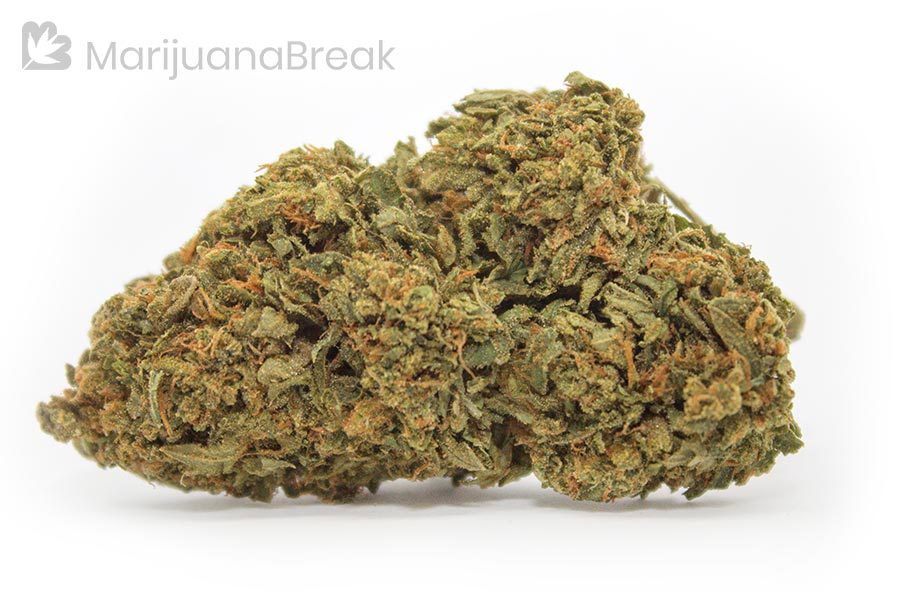 Initially, it was produced by well-known breeders Ocean Grown Genetics. Ocean Grown Genetics are known for their specialist skills in developing strains with medical benefits, and Madman OG is no exception. There are a variety of possible therapeutic benefits to be gained from Madman OG. These include relieving symptoms associated with stress, depression, sleep deprivation, and more.

Madman OG is known for having high concentrations of THC. The potent THC content gives out a relaxing body high and a wicked case of the munchies too. This is where the strain gains its medical benefits.

The strain is prevalent across most of the United States, not just in its home state. As well as California, it has a particularly strong presence in Arizona and Nevada. Overseas is a different matter, though, and it is hard to find Madman OG outside of the US. This breed is popular with those looking for a natural, earthy flavor profile, which it provides.

What effect does Madman OG have on the senses, then? We look at this now, beginning with the strain’s aroma.

The scents emitted from the Madman OG marijuana strain are a lovely, natural mix. One deep sniff will have you reminiscing of peaceful walks through the forest, with the aroma of the buds being earthy pine.

Grinding this ganja really releases the smell. The scent erupts when you break the buds, leading the earthy tones to fill the room.

This cannabis has a pleasing aroma profile without being too overpowering – a return to the natural, original skunk aromas.

What about the flavors of Madman OG? Does that coffee smell emitted from burning the bud translate into the taste? We cover this next.

Upon taste, Madman OG provides that classic sour kush flavor. This is smooth and subtle and joins flavors reminiscent of damp earth and pine wood.

The coffee taste arrives in the exhale, lingering on the taste buds to create a pleasant aftertaste. The taste will have you envisioning waking in a wooden hut deep in mountainous forests, and taking in these magnificent surroundings while enjoying your morning cuppa. It has a subtle taste profile, fitting of the relaxing effects of the bud.

How does Madman OG rate for looks? We let you know in the next section.

Madman OG comes in big, chunky buds of the brightest green. The nugs contain a fair amount of small orange hairs, which overpower the green on some buds. These give some nugs a real rusty look. There is a light frosting of sticky white trichomes, but not as many as you would expect from a breed known for its high THC content.

These descriptions probably have you chomping at the bit to try growing some of your own Madman OG. What do you need to know? We have all the information required for a successful harvest next.

Madman OG seeds can be purchased online. When purchasing any marijuana seeds, always ensure you are buying from a reputable company to avoid disappointment. If you cannot track down any Madman OG seeds, another option would be to obtain a clipping from a healthy plant. With a clipping, you can grow a genetic “clone” of the plant from which you took the sample. You may have more luck finding both Madman OG seeds and clippings in California, where the strain originated and is still popular.

Being a hybrid, Madman OG has both indica and sativa qualities. Plants will grow well both indoors and outdoors and to a medium height. The flowers are compact but still allow airflow into the lower node area. You will need to regularly prune and manicure the leave to ensure light can get to lower branches. If you remove some branches and excess fan leaves, nutrient distribution will improve, leading to healthier budding sites.

Madman OG strain reacts well to both the Screen of Green (ScrOG) and Sea of Green (SOG) method. Choosing the Screen of Green method will help to manipulate the shape of the herb, creating an even canopy. The SOG method allows you to maximize the plant’s compact structure by growing more in a square meter. Whichever training technique you utilize, you can expect to see a significantly increased yield.

Where to Grow Madman OG

Although Madman OG naturally grows well in a sunny environment, it is adaptable and also grows in colder climes. It will thrive almost anywhere in the northern hemisphere.

The plant’s stalks and branches are thick and sturdy. They do not break from the heavy weight of the fat buds and offer natural protection from strong winds. Despite this, when growing outdoors, it is still advisable to create an enclosing around the plant to protect from harsh weather like frost, which could kill your plant overnight. This is an easy step to take to make sure all your hard work doesn’t go to waste.

When grown indoors, Madman OG will typically blossom in eight to ten weeks. A successful harvest should lead to a yield of between 12 to 14 ounces of bud for each square meter.

For an outdoor grow in the northern hemisphere, you can expect Madman OG to flower anytime between the middle and the end of October. You can expect a healthy yield of 14 ounces or more bud from each plant.

Once you have gone to all that effort to harvest your beautiful buds, what kind of THC and CBD levels can you expect from Madman OG? We look into this over the next couple of sections.

Madman OG cannabis is generally seen as a high THC strain. Test results regularly put the THC content of this breed between 16 and 24%. You can get Madman OG with even higher levels, though. The highest the strain has ever tested was for a massive THC level of 34%. That result makes that batch an incredibly potent THC strain. It is rare for weed sold at dispensaries to ever contain over 30% THC. This is the highest Madman OG has ever tested at though, and you shouldn’t necessarily expect that from any you may find.

In terms of CBD levels, what does Madman OG contain?

The CBD content of Madman OG is low to nonexistent. The breed regularly tests at below 1% for total CBD content.

With basically no CBD within the plant, you should not expect to see any potential health benefits related to CBD. If CBD associated benefits are what you seek from your cannabis, Madman OG is not the strain for you.

What are the medical benefits one may gain from Madman OG, though?

Due to having high THC and low CBD content, any potential medicinal benefits to be gained from Madman OG will mainly focus on its psychoactive effects.

Madman OG is known for giving users an immense feeling of relaxation in both body and mind. A pleasant body high makes you feel at ease, and worries fade slowly away. Due to this, Madman OG can be beneficial for helping to relieve stress.

Along with the relaxation properties, Madman OG users typically report feeling happy, euphoric, and uplifted. Thanks to these qualities, Madman OG could help fight issues like depression and post-traumatic stress disorder.

The body high of Madman OG eventually gives way to sleepiness, making it an effective treatment for sleep deprivation and insomnia. People say they wake up feeling incredibly well-rested and invigorated after a Madman OG induced sleep.

The strain is also known for giving users epic cases of the munchies. Thanks to bringing on the need to munch, Madman OG can help with eating issues and subside feelings of nausea. Some have used it successfully to help ease the adverse side effects associated with chemotherapy, of which nausea is one.

It is essential to state that Madman OG’s potential health benefits may not work equally for everyone. All medical treatments react to your body on an individual basis. This means treatments may not prove to be effective for you, even though it works for the same problem for most others. Your body might not react in the same way, unfortunately. Because of this, we cannot say for definite that Madman OG would work for your issue, even if it is one of those listed above.

What about side effects? What possible ones can Madman OG give off?

Possible Side Effects of Madman OG

Madman OG has the usual side effects you would expect from pretty much all forms of cannabis. This includes giving a dry mouth, and it is particularly known for inducing dry, red eyes.

Another common side effect is a feeling of dizziness, especially when standing up after being seated for a long time. This effect tends to occur only when consuming a large amount. When consumed excessively, some can find the psychoactive effects overwhelming, and it can cause increased feelings of anxiety and paranoia.

With mid-to-high THC levels, first-timers should take their time with Madman OG. Start with a small amount and work your way up. If you are not confident in your THC tolerance, try Madman OG with a more experienced friend. Another option would be to look to another lower THC content breed.

Due to Madman OG making users feel sleepy, it is not an appropriate strain for daytime use if you have things you need to do. It is best for the end of the day when you are looking to unwind and chill out before bedtime.

So, that is the cannabis strain known as Madman OG. A funky, skunky hybrid with a happy head high that can relieve some of life’s troubles. The strain is easy on the eyes, nose, and tongue, with natural woody flavors. No need for fruity bombast here, just let the skunk do the talking. For growers, there are a couple of things to bear in mind but treat your plant right, and the rewards are handsome. A solid, reliable strain for smokers.

Madman OG – you would have to be mad not to try it!

Have you ever encountered any Madman OG? Maybe you have even grown your own. Share your tales with us below in the comments area.