Written by Editorial Team
3 min read
1 comments
Lavender Strain Overview
Just like the lavender plant, the Lavender strain of cannabis is super calming and stress relieving. It is an indica-leaning strain and offers its users an intense and relaxing high. It of course tastes very floral and herby, and much like the smell of lavender - so it couldn’t be better of a choice when you need to de-stress and unwind. 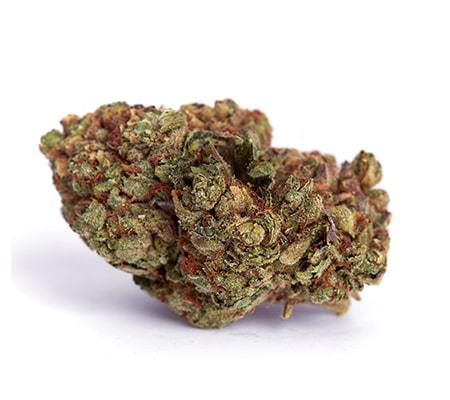 Many strains have been developed out of the cherished Afghan region, all carrying with them that signature hash flavor. These strains all derive from one region in Afghanistan and share the unique quality of being landrace strains.

However, that doesn’t stop breeders from trying to cultivate new strains using these original genetics, all in an effort to try and create the ultimate marijuana experience.

One such strain created this way is Lavender, also sometimes known as Soma #10. This indica-leaning hybrid is a favorite among growers, thanks to versatility in its growing process and its high THC count.

Let’s investigate this potent strain and learn why it is that so many people chose to use it over many other indica hybrids.

What is the Lavender Cannabis Strain?

Lavender was initially created by the Amsterdam-based Soma Seeds, which explains its otherwise rather strange alternative name of Soma #10.

The exact genetics are a little uncertain, but it definitely has many common landrace Afghani strains in its genetic history, such as Super Skunk and Afghani Hawaiian. This mix of both sativa and indica elements allows Lavender to borrow a little bit of the effects from both types, allowing for a decently rich high, despite Lavender’s strong indica leanings.

As might be expected from a principally indica strain, the first effects you are going to notice is the profoundly intense relaxation that washes over your entire body. You can expect to notice it creeping along your skin, almost like a pest, seeping into your bones and penetrating deep into your soul until you suddenly realize that you are completely relaxed.

There is a potent cerebral element that hits quite unexpectedly, coming with a powerful euphoria that propels your mind forward like a slingshot. You will feel strangely motivated, yet intensely relaxed and calm. Despite this mind high, it is the body high that will eventually prevail, causing an incredibly potent sensation of sheer laziness.

The main thing you need to watch out for while you are experiencing the Lavender high is not falling asleep. However, instead of just knocking you out cold, Lavender has a tendency to leave you just on the edge of sleep for hours at a time. Experienced users can expect this, pushing through this slight knife edge of alertness so as to quickly and efficiently fall asleep.

For newcomers, however, it can be surprisingly confusing, as teetering on the edge of desperately wanting to close your eyes, yet still feeling that prolific sensation of awareness and mental acuity.

Do not expect to be able to accomplish any kind of tasks while enjoying the Lavender high, as you will not be motivated enough to achieve anything productive.

Despite this, there is a noticeable sensation of cheeriness and optimism for the future, giving you the distinct impression that not only is everything going to be alright, but you will eventually be able to handle it, no matter what it ends up being.

For now, though, it is probably best if you fall asleep.

Of course, like with many other strains that have an Afghani background, it is not just the strong effects that people seek them out for, but also their unique flavor profiles.

So, does Lavender smell and taste like its namesake, or does it have something special?

As might be rather unsurprising, the first smell you will notice is one of Lavender. However, it has a smell more similar to a good batch of sun-dried Lavender, rather than the fresh, floral flavor that is commonly associated with walking past a sizeable Lavender bush.

The smell deepens further as you begin to get closer to the bud, as there is the distinctive, incredibly familiar smell of hash that reminds you of all the great Afghani strains you have ever enjoyed. If you are an inexperienced marijuana smoker, you might find it oddly spicy, with an undercurrent of herbaceous-ness that leaves you desperate to smell even more.

Upon the buds being opened, the smell deepens further, offering a unique blend of spiciness and lavender that you likely never imagined possible.

As Lavender is called what it is, it seems logical to expect it to taste like lavender, but what exactly is the flavor of lavender? Most of the time, it is only the floral smell that people think of; however, lavender oil does have a distinctive flavor to it that some people find very enjoyable. Unfortunately, it is rather challenging to eat lavender due to its sharp and acrid taste.

In the case of Lavender cannabis, however, the flavor is more of what you think of as the lavender taste. The taste of the Lavender strain is best described as floral, herby and extremely spicy. Expect the smoke also to have qualities of hash hidden within it, sometimes requiring a strong toke to really experience it.

Besides the flavor and aroma, what about its appearance?

The appearance of Lavender is annoyingly rather ordinary. It has a deep, mottled green appearance, with interspersed bits of orange and yellow trichomes and underlying hairs.

You’d think that there would be a more purple appearance, given this potent strain’s name, but it is unfortunately extremely ordinary, looking like any other strain you might find at a marijuana retailer.

However, as with many strains, looks can be deceiving, as even though this strain has a regular appearance, it has a dynamite flavor profile and list of effects.

Lavender is pretty well known as an easy strain to try and grow yourself. It is surprisingly versatile, able to withstand a wide variation in temperature and humidity, so you can feel free to grow it both indoors and outdoors.

For best results, try and grow it using the Sea of Green technique, meaning you cultivate many smaller growths of Lavender rather than one single large plant. This works because Lavender strives to produce a good quantity of bud quite early, thanks to its short vegetation cycle.

Unfortunately, Lavender has an especially low yield, possibly due to its landrace genetics. This is another reason why Sea of Green is a good idea, as it maximizes the amount of good bud you get at the end.

If you want to try and increase the yield, try and practice some topping by removing the top growth of the plant as it grows, so as to encourage more lateral growth. This can be combined with snipping off the smaller growths on the bottom branches, as these will rarely get sufficient sunlight.

Once all that is done and you have harvested your Lavender, what kind of cannabinoid content can you expect?

One of the things that Lavender is known for is its high THC level – you can expect around 19% THC content in your Lavender, enabling you to enjoy a potent high that manages to avoid becoming too overpowering, like with some of the crazier THC-rich strains out there.

Despite this, however, the 19% THC content can be too much for first time users, especially due to the speed with which the effects hit you, so make sure you take it slow if this is your first time using it.

What about CBD, though? Is there any of the more medicinal cannabinoid in this strain?

There actually doesn’t seem to exist any kind of definite evidence for the CBD content of an average sample of the Lavender strain. However, a combination of user reviews and common sense would dictate that, as there is a large quantity of THC, there is going to be a low quantity of CBD. You can expect roughly around 1%, though some individual samples will likely have more or less.

There is only so much room in any individual Marijuana strain for Cannabinoids, after all! However, this doesn’t mean that there aren’t significant medical uses for the Lavender strain!

Lavender is a strain that is generally useful for all things that are commonly treated with high doses of THC. This includes any kind of issue arising from mental disorders, such as excess levels of stress, anxiety and even helping to manage depression. Additionally, the endlessly relaxing, calming effects of this strain are great for treating PTSD.

By far the most common medical use of Lavender is in treating insomnia, thanks to its soporific qualities that enable almost anyone to fall asleep.

Many people also use the Lavender strain to help treat chronic headaches, as the combination of relaxation and a reduction in the ability to feel the sensation of pain are both excellent at suppressing migraines.

Finally, Lavender also has uses as a way to help suppress nausea and anxiety, despite its prolific quantity of THC.

Of course, you can expect a few side effects as well.

Possible Side Effects of the Lavender Cannabis Strain

As with any strain with a powerful quantity of THC, you can expect the signature effects of dry mouth and dry eyes to accompany your high. You can best fend this off with a large glass of water and just generally staying hydrated.

The other major side effects include dizziness and headaches, which are pretty ironic considering those are two things that Lavender is supposed to help with!

However, you are only at risk of suffering from these side effects if you have overindulged in your Lavender; like many things in life, you can reach a point where too much of a good thing is particularly bad.

Just make sure you keep your use of Lavender to a small quantity, so as to avoid any unnecessary pains or sudden desire to sit down quickly and take a nap.

One final thing to remember is that high-THC strains can tend to cause anxiety if you are already predisposed to suffering from anxiety, so make sure you don’t overuse Lavender if you are prone to unfortunate pangs of anxiety.

Lavender is one of those strains that has been cultivated to be both powerfully effective and wonderfully tasty.

Though its origins lay in rather uncomplicated landrace Afghani strains, Lavender is an excellent example of the ingenuity of the marijuana breeding community.

You can expect a profoundly relaxing experience when you use the Lavender strain, coupled with a pleasant cerebral high that might leave you rolling on your bed, but not unpleasantly.

If you do manage to get your hands on some Lavender, whether because you have grown your own or because you have managed to find some (as it is rather rare in the USA, for some reason), then look forward to an intensely powerful, relaxing high that will eventually culminate in a near-complete loss of consciousness.

There are a lot of cannabis strains that exist with an eventual effect of knocking you out, but only Lavender offers both a uniquely spicy, floral flavor profile that combines with an extremely relaxing, soothing effect.

Enjoy Lavender to relax, fall asleep, and treat all kinds of irritating medical symptoms. It might not taste exactly like Lavender, nor look like Lavender, but it is definitely worth it anyway.