Written by Editorial Team
7 min read
0 comments
Katsu Bubba Kush Strain Overview
Katsu Bubba is an indica-dominant strain that induces relaxation and calm. Users also enjoy its analgesic effects and ability to soothe some chronic pain symptoms. It is a great option for users seeking help with sleep and tension, and it boasts a great warm, earthy and sweet grape flavor. 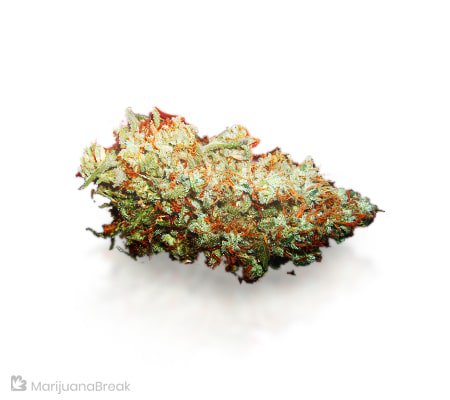 It’ll hit you pretty fast and you’ll notice subtle bodily effects such as tingling sensations and a calming relaxation that will wrap around you and bring you to a blissful state. Then after, you also will become extremely sedated and sleepy while your body is brought to a state of pure relaxation and dreaminess. It will last for hours, so be prepared to be pretty out of it for a while.

This makes it a perfect strain for treating insomnia and other conditions where extreme stress or inability to relax is common. It can also help with appetite, nausea, pain, and even depression.

In addition to the pretty chilling effects of the strain, it also has a nice grape and berry-like flavor, which makes it super popular for those fruit-adoring cannabis fans. It is also earthy at the same time; so combined with the fruitiness, it can be turn out pretty sour at times. The buds are pretty dense and forest green in color. They also have a nice layer of snow-white crystals which cover them, along with a sticky resin as well.

What is the Katsu Bubba Kush Strain?

Katsu Bubba Kush is a unique strain that is a phenotype of the better-known Bubba Kush strain. Although its origins are a bit ambiguous and mysterious, from what is known online, it seems to have been bred in Colorado.

It contains pretty high THC levels, usually ranging from around 15% to 24%. Effects of the Katsu Bubba Kush strain of weed have been described as being extremely relaxing, sedating, and capable of producing quite a strong euphoria. It can make you feel as if you are tied down to the sofa and unable to move at times because of its extreme sedation and deep state of relaxation it can put you in. It will soothe your body and it can help with conditions such as muscle inflammation and physical stress. So it is great if you are experiencing chronic stress or tension.

Besides the effects, it is known for its very floral and fruity taste and aroma – most resembling a grape and floral sort of flavor. It is also very earthy at the same time, keeping that traditional grassy marijuana taste, so it provides a very unique flavor that is quite chill. Many people enjoy the pleasant and complete body relaxing high they experience from Katsu Bubba Kush. But if you’re going to smoke it, you need to make sure you don’t have any plans for the rest of the day, because you may be zonked.

Aroma: Katsu Bubba Kush has an aroma that is very floral and earthy. At first whiff straight outta the jar, you may notice some slight undertones of berries. As you grind, you may start to cover some very nice floral notes as well.

Flavor: When it comes to the flavor of Katsu Bubba Kush, it is very much like a berry and grape sort of explosion in your mouth. Combined with the grass-like properties of traditional marijuana, it is definitely a unique taste that will have your taste buds’ curiosity piqued – that’s for sure. Some even say that it is sour on exhale, like a sour candy.

Appearance: In terms of appearance, the Katsu Bubba Kush has very dense buds that are often forest to olive green in color. To top that off, the buds are often dusted in a nice layer of white crystal trichomes and thick syrupy resin that will make your mouth and senses water.

Katsu Bubba Kush can grow pretty easily in many different aspects. It can be grown both indoors and outdoors with ease, but for the highest yield per plant, many note that the indoor method of hydroponics can be the best method. It is also resistant to many common molds, diseases, and complications – so there’s not much work that needs to be put into maintaining the plants.

If you’re looking to grow Katsu Bubba Kush indoors, you can expect to start seeing buds to form at around eight to nine weeks. They’re not too big and not too small, but you can expect to get around 15 oz of bud per square meter of plant. If you’re going to go for the outdoor method, you are going to have to wait until around November to start seeing buds. But in contrast to the indoor method, Katsu Bubba Kush yields around 20 ounces per plant – so it’s a definite increase in how much you’re getting.

If you’re going to grow outdoors, it also needs to have a warm and dry environment. You can also grow in a little bit cooler environments as well, but this strain in particular overall does better in warmer environments.

If you’d like to buy Katsu Bubba Kush strain seeds and grow your own bud, you can do so easily, because many online seed dealers sell this strain of seeds. It is pretty well known and can be found by a variety of different dealers and growers alike. So overall, you can grow your own Katsu Bubba Kush either indoors or outdoors because it does pretty well in all atmospheres, but it tends to do a little bit better in warmer climates, so that is something to keep in mind.

Katsu Bubba Kush has very low CBD levels which are usually around 0% – or if lucky 1%.

Katsu Bubba Kush is greatly known among the medical marijuana community due to how strong it is, and how much it can relax the senses. It can help to just melt away stress and also make you calmer if you are restless and irritable. Due to the sedation and ability to calm the muscles and senses, it is often used to treat feelings of chronic stress and tension.

It can also greatly help with insomnia since it is extremely sedating and can knock you out and make you feel very heavy. It can often help you get a proper night’s sleep without waking up and doesn’t take that long to start working either, so that’s a pretty fast-acting sleep aid.

If you’re also suffering from a lack of appetite, this strain can definitely help the munchies to kick in and help you eat again. Many people also use the Katsu Bubba Kush strain for relieving pain such as headaches, migraines, and other muscle-related pains, whether short-term or long-term.

Katsu Bubba Kush just has many different medical uses because of how potent it is at relaxing, which can, in turn, help other aspects of your body function much better, such as through a profound night’s sleep.

Possible Side Effects of the Katsu Bubba Kush Strain

As with many other strains of cannabis, the same typical effects apply to Katsu Bubba Kush, such as dry mouth (or cottonmouth), dry eyes, and dizziness. Some people may also become a bit anxious due to the high levels of THC which are found in the Katsu Bubba Kush strain, along with some feelings of paranoia which may develop.

So, if you are sensitive to THC or if you are someone who suffers from an anxiety disorder, then Katsu Bubba Kush may not be for you – or you just may simply need to find your sweet spot and start small with the dosage, increasing as necessary.

In addition, it can make you extremely sleepy and tired and if you are not careful, so doing activities which may require you to be alert can have consequences – especially if consumed in higher amounts. But overall, as long as you are home and have no plans to go out you should be fine, lolling away in a deep and relaxing sleep that is both rejuvenating and restful.

Being crossed from its parent, the original Bubba Kush, the Katsu Bubba Kush strain still has both those amazing and sedating effects that the Bubba Kush is known for. Being nearly 25% THC, it is pretty potent and can cause you to be extremely relaxed and sedated. So, if you were looking for a high that will knock you off your feet and make you get the best rest you ever had, Katsu Bubba Kush may be perfect for you.

In addition to its ability to help you sleep, it can also help with pain and muscle inflammation due to how relaxed your body will get, which can help other senses to calm down and overall just bring about a sense of rejuvenation and restoration to your body. People also use Katsu Bubba Kush to help with nausea and depression due to its ability to help you gain your appetite back and also to boost your mood.

But if these amazing and sedating effects weren’t enough for you, Katsu Bubba Kush also tastes like grapes! What could be better than a grape and berry-like smoke with that nice traditional marijuana taste at the same time? It is a grassy, earthy, fruity smoke and just pure bliss on the tongue.

So, if you are looking for a strain that tastes amazing and grapey, as well as one that can sedate you and make you feel restored and euphoric, Katsu Bubba Kush should definitely be your next smoke. With its easy to grow nature, you can also do it yourself and have an abundance in no time at all.

22
3 min read
Join the discussion
TOC
Premium
Your subscription has ended
If you love cannabis and appreciate our content, join WayofLeaf Premium today and receive:
Best of all, part of your membership fee will go towards helping to legalize cannabis.
Go Wayofleaf Premium
No thanks, I can't afford it
I already have an account
×
Login in to your premium account