Written by Editorial Team
5 min read
0 comments
Read Later
All information on this website is for general informational purposes only and is not intended or implied to be a substitute for professional medical advice, diagnosis or treatment.
Kali Dog Strain Overview
The Kali Dog strain is the harmonious balance of an energetic cerebral kick and a chill, relaxing body high. It features an engaging lemon flavor laced with a hard-edge of diesel. 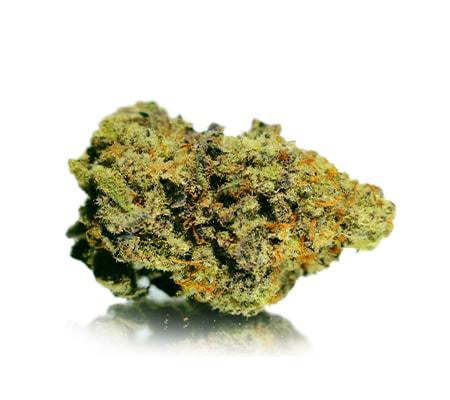 The Kali Dog strain is the perfect blend between high-energy and laid-back. Fans of this strain aren’t put off by this dichotomy. Many enjoy the smooth and vibrant cerebral rush, followed by the mellow let-down. Kali Dog is the culmination of two strains: OG Kush and Sour Diesel. These two strains meld to form Kali Dog (or Cali Dawg), the inventive concoction of Royal Queen Seeds

While some would argue this strain is an acquired taste, it has amassed a loyal fanbase. Many rave about its heady nature and its enticingly social allure. It is an excellent strain for those that want to wind down at home with the company of a few friends. Users have cited its ability to prod many into a talkative and amiable mood.

Kali Dog may also help users by reducing a variety of pain symptoms. It is also a great strain for those seeking to find their muse. Users state that this strain aids in focus, and is a terrific way to get the creativity going.

It also features a lightning-fast hit, with some feeling the effects in only a few minutes. This may prove helpful to anyone with chronic pain. It is also a boon to those that desire a bit of a boost in mood as it uplifts and induces euphoric, blissful feelings. It also may increase appetite, so consumers should keep snacks on hand.

Kali Dog doesn’t interrupt most daily routines. Due to its energizing nature, users should use this strain during the day. If taken during the evening, it can provide a great social atmosphere. However, most users state that it is not a strain that induces sleep. Consumers can perform essential tasks, exercise, and go about their day.

What Is the Kali Dog Strain?

Kali Dog weed is the creation of Royal Queen Seeds. The breeders paired the potent OG Kush with the brashness of Sour Diesel to get a strain that is lively, enervating and yet, quietly mellowing. Kali Dog’s parent, OG Kush, has origins cloaked in mystery. Experts and cultivators alike are unsure as to its background.

Despite this uncertainty, OG Kush has given Kali many valuable traits. Along with Sour Diesel, it has given the strain punch, sass, and the lemony bite that is one of the many reasons Kali Dog is beloved. 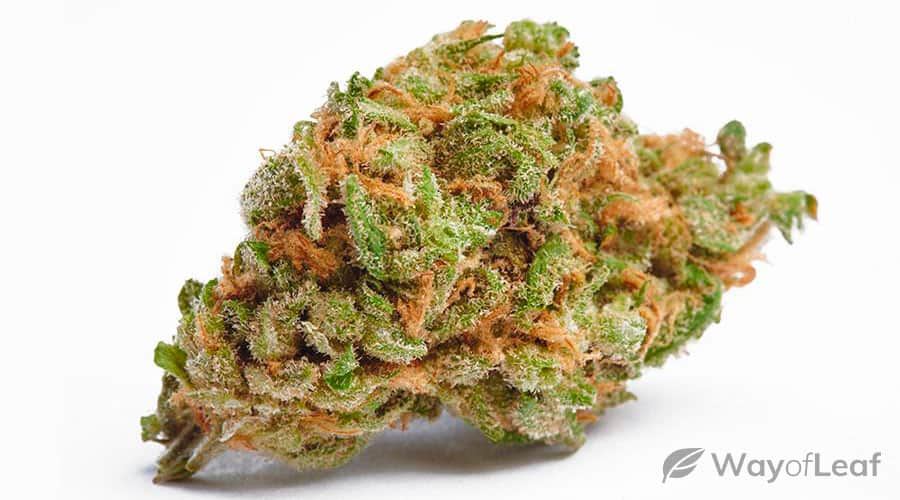 OG Kush is a strain that users know for its role as the progenitor of quite a few popular strains, including Fat Banana. Its properties include a euphoric high, along with a strong, piney aroma. It has a potent THC level, with some estimates as high as 27%.

Sour Diesel, much like its Kali Dog offspring, is sativa heavy with a dose of indica. Sour Diesel is famous for its sharp, diesel fragrance. It is also a strain that is citrusy, with a refreshing burst of THC.

Unlike some other potent strains, Kali Dog doesn’t have as many side effects. This makes it an excellent option for those seeking a bit of potency without the harsh high. Its THC level, while strong, may not overwhelm. However, users should still exercise caution. Newbies and even seasoned tokers should plan to go low and slow.

Kali Dog may not be the choice for newer growers. It tends to fall on the more challenging side and thrives best in certain conditions. Those that choose to grow this strain feel that it is well worth the effort. If cultivated in optimal circumstances, it can provide any grower, whether slightly green or more knowledgeable, a good yield.

The Kali Dog strain has a complex aroma. It contains a robust fruity feel that is slightly sweet and floral but balanced by a burst of ripe lemons. While the lemon smell has a sour, tangy appeal, the smell of dank diesel fuel follows quickly after.

The pungent nature of the lemon and diesel has a fresh, nearly effervescent piney tinge. This woodsy element is rich in its earthy tonality, with slight hints of skunk.

The Kali Dog strain has a unique and complex flavor signature. On the inhale, tokers may detect the full-bodied hit of fruit. It isn’t overwhelmingly sweet and is instead quickly tempered by the cut of sour lemons. Though lemons are the star of the show, other flavors follow.

One flavor, in particular, is the taste of diesel fuel. Those who follow this strain note its heavy aftertaste. There are other flavors users find, including the fresh taste of pine, some earthy herb, and a hit of skunk.

Fans of Kali Dog characterize it by its brilliant, verdant nugs. It boasts sizable buds that are dense, compact, and weighty. It has some fantastic colors, as evidenced by the zig-zags of vivid orange pistils and dots of dark vermilion. It has splatters of frosty, sticky trichomes.

Kali Dog strain seeds have a somewhat tricky growth profile. The feminized seeds require specific conditions to thrive. This includes an environment that has low humidity. The arrangement of the buds makes this strain a prime candidate for mildew and mold. For best results, growers should seek to grow in mild, temperate climates. 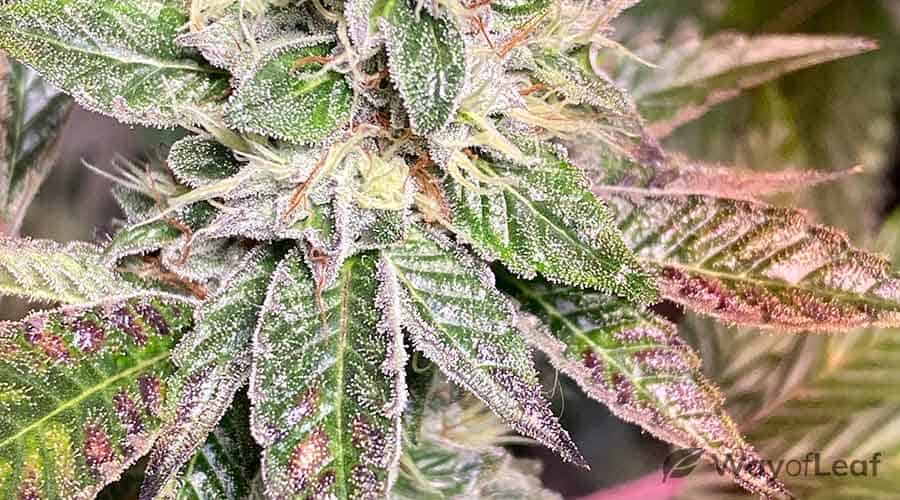 Kali Dog grows best when cultivators trim its branches. This allows for proper air and sunlight circulation. This strain also grows relatively tall, with leafy stalks that need to stretch. Outdoor growth is optimal. However, when growing indoors, there are a few tricks one can use. Kali Dog responds well to specific growth techniques, such as topping. It requires heavy minerals, so growers should supplement with boosters and soil additives.

It is also susceptible to pests, and growers should be on the look-out. Frequent inspections should help as well as discarding dead or drying leaves. It takes about 9-10 weeks from seed to harvest. Outdoor growers can expect up to 600 grams per square meter, and those who grow indoors may harvest up to 500 grams per square meter.

The highest test of CBD for this strain yields 0%.

The Kali Dog strain may prove useful in reducing pain. It may help to curb discomfort from the likes of back problems, migraines, and muscle spasms. Users have cited its use in other areas, including combatting fatigue and tiredness.

Kali Dog may also mitigate stress and induce feelings of relaxation. It functions as a social strain, allowing for some individuals with social anxiety to find some relief. It may also uplift mood and inspire feelings of euphoria and increase appetite.

Possible Side Effects of the Kali Dog Strain

Side effects of this strain may include dry mouth and eyes.

Kali Dog is a potent strain with THC levels that average about 20%. It has little to no CBD. The Kali Dog strain is excellent for social occasions and daily use. Consumers should take this strain in the morning or afternoon for its energizing effects. Those suffering from fatigue may benefit from this strain.

This strain is sativa-dominant. However, it has some indica qualities. One trait is its ability to relax, calm, and soothe. Consumers often use this strain for stress reduction and to uplift mood. Many users enjoy that the high is quick, though not harsh. Many would classify the high as cerebral, and it may help creatives or those seeking focus and more concentration.

Kali Dog induces a body high. However, users don’t associate this with the tired feeling of being couch-locked. Cultivators of this strain can expect a harvest after 9-10 weeks. This strain grows well in conditions with low humidity. It thrives best in temperate climates. It is also susceptible to mildew and needs nutrient boosters in its soil for optimum growth.