Written by Editorial Team
6 min read
19 comments
Video
Read Later
All information on this website is for general informational purposes only and is not intended or implied to be a substitute for professional medical advice, diagnosis or treatment.
Hindu Kush Strain Overview
Hindu Kush is a 100% indica strain, with high levels of THC and little to no CBD. It originates from the Hindu Kush mountain range, on the border between Pakistan and Afghanistan, and made its way to the US in the 60s. This strain is earthy in terms of flavor, and has magnificent notes of pine, lemon, and citrus. It’s perfect for an evening smoke as it relaxes and sedates. 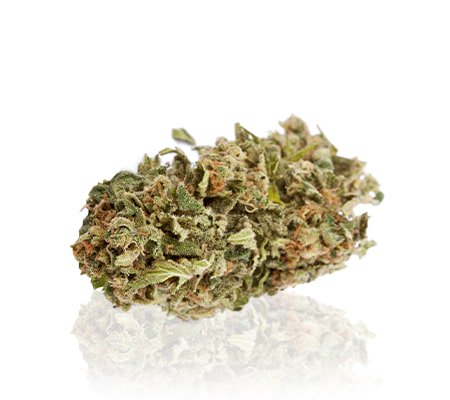 Along the border of Afghanistan and Pakistan lies a vivid, grand, exotic mountain range; they call her Hindu Kush. She is around 800 kilometers long, stretching far and wide across this region. Beyond just being a geological phenomena, however, this range is also historically significant – said to be some of the earliest origins of Buddhism.

During ancient times, nestled in the mountains one could find small and shrubby, densely-packed Christmas tree looking plants. People began to discover them, harvesting their flowers for various purposes.

The genetic origins of Hindu Kush weed today are as pure as its smoke; offering immense, natural potency and a direct connection with Mother Earth herself. In this informative Hindu Kush review, you’ll learn everything you need to know about this timeless, iconic marijuana strain from one of the most striking geographic locales on earth…

What Is the Hindu Kush Marijuana Strain?

Classified and referred to as one of the absolute purest indicas on the planet, Hindu Kush’s genetics have been tested to show that the results do, indeed, backup the exquisite claims made.

Ranking in with a 100% indica content, if you are choosing to consume the Hindu Kush marijuana strain, you know exactly what you are getting yourself into (at least if you’re familiar with what an indica can do to the mind and body). Just a little bit of Hindu Kush can go an extremely long way, because of its naturally present 20% THC content.

The steady presence of this compound throughout legal MMJ dispensaries is also partially what makes Hindu Kush so medicinal. Although its origins are from landrace strains present in Afghanistan and Pakistan, this ancient marijuana strain was actually brought to America during the 1960s and 1970s, when many exploring parts of the Middle East on what became referred to as “the hippie trail” began bringing cannabis seeds back to the Western world.

Bred from authentic landrace indica genetics, Hindu Kush is believed to have been circulating among U.S. marijuana users as early as the 1960’s.

Hindu Kush was one of the specimens brought back from this ‘enlightened’ period of travel, beginning its journey towards globalization in the progressive California city of Oakland, where it continued to spread and gain popularity because of how much consumers were benefitting from both its medicinal qualities, and untouched, bona fide effects.

Many of the Hindu Kush seeds sold today have been crossed with other Kush types (mostly for genetic stability), but still these variations are almost exactly like the original, and produce exemplary effects in most instances.

From the first sniff, the potency and pungent nature of Hindu Kush is apparent, filling the room it’s in with the aroma of earth, pine and flowers followed by hints of sweetness.

Its flavor is best described as creamy, offering a smooth and velvet-like smoke for the throat and mouth, covering the taste buds with hints of spicy-sweet pine and lemony citrus. Appearance wise, as mentioned earlier Hindu Kush is a short and densely-packed crop, much like a miniature Christmas tree. 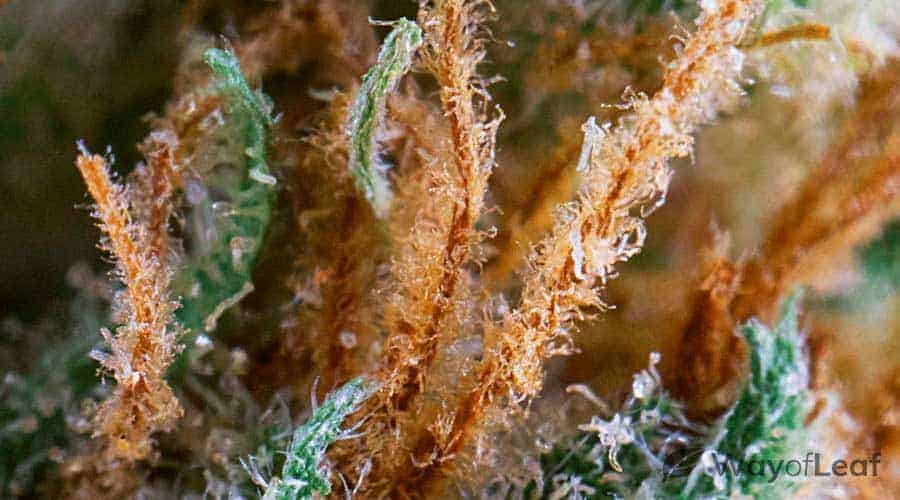 The crop color is a rich, forest green, with lighter shaded green buds that feature a prominent, thick coating of trichomes, or glistening, THC crystals, that are reminiscent of the first frost of the year.

In between the green colored frosted sugar leaves is a blend of brassy and bright orangish-red pistils, which are those tiny hairs that curl and twist throughout the bud. The buds themselves are pop-corn like, with densely packed herb.

Since Hindu Kush is an indica, its vegetative appearance mimics what is typical of this category; featuring a short and shrubby crop with densely packed and stacked upwards colas (collections of buds). It virtually looks like a miniature Christmas tree, albeit with those leafy, “classic cannabis” shaped leaves in place of evergreen pine needles.

Due to its short stature, those thinking about growing Hindu Kush indoors can do so in a smaller-than-average space as long as proper ventilation, lighting and temperature control are present, in addition to proficient care (if you want your end result to be a successful, hearty harvest).

All marijuana crops in premise are high maintenance when compared with other plants, but Hindu Kush can grow with independence, if the correct conditions are met. In particular, climate seems to have a heavy impact on the quality of crop, with the Hindu Kush strain naturally preferring warm and dry locations (conditions that mimic its Middle Eastern, mountainous beginnings).

Hindu Kush weed can be grown either indoors or outdoors, and it has a high resistance to diseases, pests, molds and mildews, making it fairly easy to cultivate.

With the right equipment and under the right conditions, Hindu Kush can produce excellent yields both indoors and outdoors.

Indoors, Hindu Kush might be best to use soil growth methods rather than hydroponics, because the water involved in hydro can cause an increase in humidity, generating a greater need for humidity control in order to keep the environment dry.

If you grow Hindu Kush outdoors in a more spacious location, its branches will reach wider and you could end up with a bigger plant. All in all, this is a personal choice and dependent on the type of plant you’d like to end up with.

The typical flowering period of Hindu Kush is around 7-9 weeks, meaning it is quick to be ready for harvest. And best of all, it offers a substantial yield at around 14 ounces per meter squared indoors, and 16 ounces per plant outdoors.

All of these factors combined, makes Hindu Kush a brilliant, choice crop for those who desire a pure indica with profound effects, that also won’t be a grave challenge regarding cultivation.

Due to its 100% indica genetics, it is no surprise that Hindu Kush weed affects the mind and body exactly as a very strong indica strain would.

Immediately bringing complete, all-over body and mind relaxation, this strain melts you into a puddle of euphoric bliss. It is heavily sedative, which makes it an essential night time or evening strain, but therefore it can also bring about the munchies and couch-lock.

Mentally, the Hindu Kush marijuana strain creates good vibes and a positive attitude, allowing you to feel safe and comfortable enough to release and express the inner joy, gratitude and giggles from within – without all the mind loops and negative internal commentaries.

Furthermore, Hind Kush cannabis can make even those with a complete lack of appetite very hungry. The effects of Hindu Kush are long lasting and will typically be felt for at least 3 hours after consumption, but probably more like 6-8 hours.

Hindu Kush is so suitable at relaxing the mind and body that it has many applicable uses in the medical world and for patients of medical marijuana.

This cannabis strain generates quite a body high, allowing those with chronic stress, chronic pain, migraines, insomnia, lack of appetite, muscle cramping and more to experience relief. Essentially, any possible tensions can release with the aid of this plant. 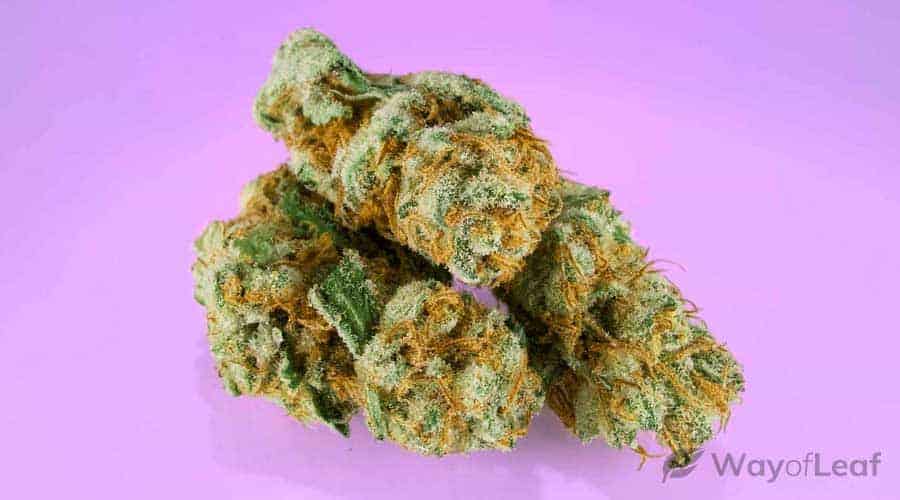 Those seeking physical release should opt for a larger potency of THC, in order for the effects to do their job to the full extent. Concentrates, edibles, extracts, candies and hash, are all methods of consumption that can provide the system with more THC, while requiring less of the actual act of consuming.

Hindu Kush weed can also act as an aid for those with mental disabilities, conditions, ailments or disorders. Anxiety and depression can become calmer and more manageable, as well as other mood disorders. Those seeking assistance with a condition of the mind should be careful not to over consume any marijuana, especially those with high THC contents, because it can lead to greater anxiety and sometimes even paranoia.

You can generally avoid these uncomfortable circumstances by starting out small and increasing the dose as necessary. Having clear boundaries and limits is vital, and sticking to those guidelines is just as important.

It is not typical of Hindu Kush to cause extreme negative side effects. For example, it is rarely reported that paranoia or greater anxiety was experienced after the consumption of this cannabis. Cottonmouth (dry mouth) and dry eyes, however, are quite frequently mentioned, but should not be a cause for alarm as both can be easily managed with a little extra planning and preparation.

Cottonmouth, for instance, simply requires the consumption of more fluids, because dehydration is a common issue amongst all walks of life, so the smoking can make it even stronger. Have a bottle of water or other hydrating fluid close by at all times, and even prepare something before hand so that if you get overly relaxed and don’t want to get up, you won’t have any excuses.

By purchasing moisturizing eye drops, which are sold for affordable prices at most drug stores, you can avoid the discomforts from having dry eyes. All in all, the pros of Hindu Kush greatly outweigh the cons.

If you are an individual dealing with chronic stress, pain, anxiety, depression, insomnia, or lack of appetite and are searching for an alternative to conventional medicine, then Hindu Kush cannabis may just be the right marijuana strain for you.

In fact, Hindu Kush is one of the most classic indicas of all time, and if you are serious about your marijuana consumption, it is an absolute must-try — period.

We hope you found this Hindu Kush strain review to not only be informative, but also educational. Cannabis has been used as a powerful medicinal tool for generations, and this Middle Eastern strain certainly is one of the greatest forces to be reckoned with for a variety of medical ailments.

Biscotti Overview Biscotti is a sweet strain perfect for dessert lovers. It’s a strain you should certainly try if you’re seeking a relaxing strain you can use to unwind. It’s relatively new, too, but not one you should miss. Flavors Cookies (Girl Scout Cookies)DieselSweetVanilla Common usage AnxietyChronic painDepressionStress Effects EuphoriaHappyRelaxationSocial Growing info Biscotti does not […]