Written by Editorial Team
3 min read
0 comments
Read Later
All information on this website is for general informational purposes only and is not intended or implied to be a substitute for professional medical advice, diagnosis or treatment.
Great White Shark Strain Overview
The Great White Shark strain is a powerful and strong strain, much like the notorious mackerel for which it was named. This strain has quite a high THC content, so it’s definitely not for newbies, but smoked properly, it can be a savior. Great White Shark has been noted to help with all kinds of conditions from arthritis to muscle spasms to depression and anxiety. 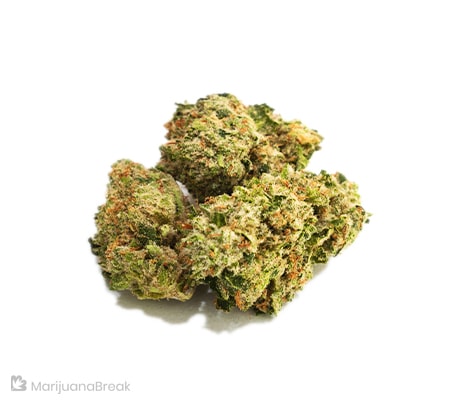 The Great White Shark strain, a.k.a Shark Shock, is named after the killer shark that marauds the world’s offshore and coastal waters. If the water in the sea where you swim is between 54 and 75 degrees Fahrenheit, there’s a chance that this predator will be stalking its prey not so far away from the shore!

In Jaws, the great white shark is billed as a ferocious man-eater. While humans are not its main prey, it is the species responsible for the most shark attacks on people. Fortunately, Great White Shark marijuana is not going to attack you in murderous fashion. However, it is a pretty potent strain.

What Is the Great White Shark Strain?

Great White Shark weed is a strongly sativa-dominant hybrid and is a cross of a South Indian Sativa, a South American Sativa, and Super Skunk. The strain is also known as Peacemaker or White Shark, and was a big hit in the 1990s. It reached its peak in 1997 when it won the High Times Cannabis Cup.

As the new century dawned, Great White Shark was almost an endangered form of cannabis as fresh new strains hit the marketplace. Fortunately, it is making a comeback and has become a big hit in Colorado.

Great White Shark is a fragrant strain, and its pungent aroma makes it hard to enjoy a secret smoke! Aside from a subtle citrus note, it has a zesty wood, clove, and lavender scent, with an earthy-skunk smell to finish things off.

If you enjoy the aroma, you will adore the taste! Its genetics ensure that Great White Shark has a very skunky taste and there is more than a hint of citrus throughout. You may also be surprised to get the taste of lavender, clove, and honey as you smoke your joint, with a spicy wood note leaving a strong aftertaste.

The buds are shaped like footballs, while the calyxes are extremely fluffy. When it is getting ready for harvest, you should see red-orange pistils and glistening trichomes.

In general, if you have Great White Shark seeds, we recommend growing it indoors. If you prefer to grow it outside, make sure your crop gets a lot of nutrients because this is one hungry plant! If you decide to grow this marijuana outside, you will be rewarded with a huge yield of up to 35 ounces per plant. It should be ready for harvest by the middle of October.

If you are growing the plants indoors, the flowering time is 9-10 weeks. You will also enjoy a huge yield of up to 28 ounces per square meter planted. Great White Shark is a fairly short plant, and it consumes an enormous number of nutrients during the first eight weeks of growth.

It is a plant that responds extremely well to the Screen of Green (SCROG) or Sea of Green (SOG) growing methods. Great White Shark weed also grows well in a hydroponics setup. When you grow it properly, the strain lives up to its name as it will be covered in white trichomes. As a result, it is one of the strains of choice for individuals looking to create concentrates.

Although you can get strains of Great White Shark with just 12% THC, we have heard that it has tested as high as 21%.

In general, the CBD content of this strain is below 0.2%. As a result, the THC to CBD ratio is likely to exceed 60:1.

What Can I Expect When I Use Great White Shark Weed?

With so many marijuana strains offering a THC content well above 20%, it is easy to make the mistake of thinking that Great White Shark is a moderately strong cannabis strain. In fact, budtenders are regularly told NOT to recommend this strain to newbies because the high can be far too potent to handle at the beginning. It can be a very bad experience if you use too much too soon.

Great White Shark is a consistently potent strain, and the effects are quite strong throughout the high. It certainly earns the name ‘Peacemaker’, because you will feel happy and at ease with yourself. Users report feeling a mood boost that lasts them for the entire day. If you have had a stressful day, light up a joint with Great White Shark and prepare to relax.

It has gained prominence in the medical marijuana community as an excellent stress reliever. If you have problems thinking positively, this is the right option for you. As it is such a potent form of weed, Great White Shark is potentially useful for managing chronic pain. It is used to treat migraines, muscle spasms, and arthritis.

Although it is a soothing marijuana strain, it is also uplifting so you can use it during the day. Patients with mental health issues such as depression or anxiety also use Great White Shark in the hope that it helps them become upbeat and positive. It is also an energizing sativa, which means it can be used to handle chronic fatigue.

Once again, don’t let the moderate THC content fool you. Great White Shark is a beast and can cause side effects such as dry mouth, dry and itchy eyes, and you will feel extremely thirsty. If you are not used to the effects of a potent marijuana strain, there is a decent chance you will experience dizziness.

If you are predisposed to paranoid thoughts, it is possible that this strain will exacerbate them. Novices, in particular, are susceptible to feelings of anxiety.

There is no question that Great White Shark marijuana is potent and commands respect. However, the prospect of using it isn’t quite as scary as diving into shark-infested waters. It is a cannabis strain that has been around for a very long time, and while it lost its crown decades ago, it is still one of the best medicinal marijuana strains around.

You can use Great White Shark to potentially treat medical conditions such as chronic pain, stress, depression, insomnia, and inflammation. If you are not careful when using it, side effects such as heightened anxiety and cottonmouth could take hold.

Great White Shark is a fairly easy strain to grow because it is relatively resistant to common molds and mildew. Moreover, its yield is among the highest you are likely to find.

The strain that leaves you in a spin

58
6 min read
Join The Discussion
TOC
Premium
Your subscription has ended
If you love cannabis and want to support our site, join WayofLeaf Premium today and unlock
Best of all, part of your membership fee will go towards supporting the fight to legalize cannabis.
Sign Up for WoL Premium
Not now
I already have an account
×
Log in to Your Premium Account