Written by Editorial Team
6 min read
7 comments
Video
Read Later
Ghost Train Haze Strain Overview
Ghost Train Haze is a dynamic strain of cannabis that has a vast array of uses. It can help with anything from glaucoma and arthritis, all the way to ADHD and depression. Besides being a great medicinal strain, it also tastes citrusy and floral, so it will tantalize your taste buds in a new and exciting way. 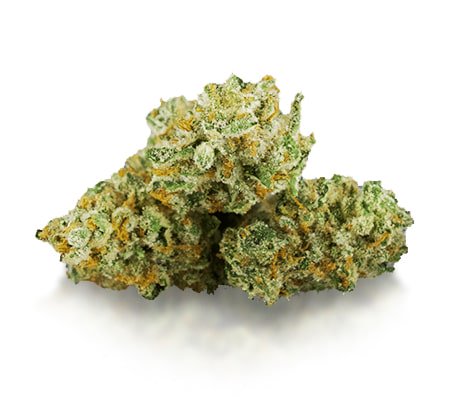 Flavors
Citrus
Flowery
Sweet
Common usage
Cramping
Inflammation
Muscle spasms
Effects
Happy
Laughing
Relaxation
Growing info
While this strain can be grown both indoors and outdoors, the choice is dependent on the local environment since it grows best in a hot and dry climate. For indoor growers, you can expect a flowering period in about 9-10 weeks. For outdoor growers you can expect to see buds around late October.
THC
28%
CBD
0%
Sativa
80%
Indica
20%

Bred by Denver based growing company Rare Darkness, Ghost Train Haze is certainly not a strain for beginners – the sometimes psychedelic (but always heady) cannabis type not only contains potent quantities of THC, but also has some “intriguing” effects which may not be a solid match for some.

| In fact, some Ghost Train Haze users have jokingly (or maybe not so jokingly) compared the strain to a mild psychedelic.

In 2012, High Times actually named the strain the “Most Potent on Earth”, further solidifying its intense abilities. Aside from being a superb option for those who like a bit of a “cerebral adventure,” GTH is also met with outstanding medical benefits, which is why it has gained so much popularity globally and become notorious for providing multi-symptom support.

What Is Ghost Train Haze?

As a masterpiece genetic crossing of parent strains Ghost OG (hybrid) and Nevil’s Wreck (sativa), Ghost Train Haze is an intensely potent marijuana miracle – notorious for being one of the world’s strongest smokes and ranking in with an average THC content of 28%.

Time and time again, consumers warn that GTH should be reserved mostly for experienced smokers, primarily when ingested in higher doses, because there is a possibility of THC-induced paranoia with this strain – especially if you are someone who is prone to anxiety. (Actually, those with anxiety might want to try one of these four strains instead).

As soon as you step into the room that has a bag of Ghost Train Haze in it, you’ll know it’s there. This cannabis type is potent, pungent, and wildly rich, stinking up whatever space it’s in. This might be cumbersome for some, but we all know that strong weed will always come along with an absurdly dank aroma.

| The aroma of Ghost Train Haze is wickedly potent — so don’t expect it to be able to store (or smoke it) discreetly.

It actually leaves the air reeking of citrus and flowers, and impacts the senses with its sweet, naturally floral scent. The taste buds will receive a similar experience, for as soon as the cannabis strain hits the tongue, extensive notes of citrus are felt – sometimes arising as a sweet lemon flavor. The inhale is smooth and velvety, gently touching the lungs, with an earthy and floral exhale that lingers in the mouth long after the smoke itself has passed. 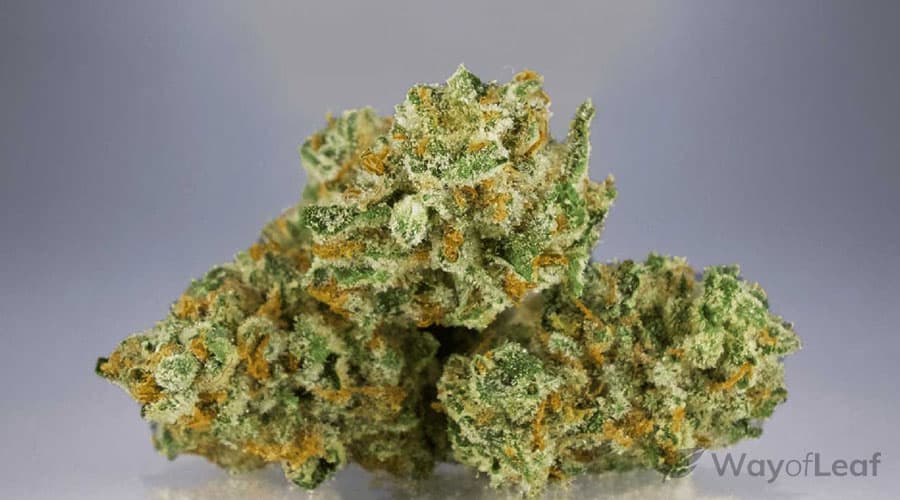 Appearance-wise, Ghost Train Haze can mostly be described as frosty-white, further supporting its spirit-related name. Covered in so many crystals and vibrant trichomes, the sugar leaves are certainly sugary, radiating a bright, forest green color, with brassy orange pistils (those tiny, curling hairs) dancing amongst the “freshly fallen snow”, adding just a pop of color and plenty of extra texture. The buds are dense and potent, often weighing much heavier than their apparent size.

Just as smoking Ghost Train Haze isn’t suitable for everyone, growing it probably isn’t either – this is a strain that requires some prior cultivation experience in order to produce a successful yield. The upside? GTH is largely resistant to many common cannabis diseases, and can produce glorious yields if cultivated in the right conditions.

For example, the strain prefers a hot and dry outdoor environment (i.e. California), but since not everyone is blessed to live in conditions like these, an indoor grow op is usually the preferred cultivation method of choice. This implies plenty of ventilation, humidity monitoring, and constantly watching out for mold and powdery mildew. 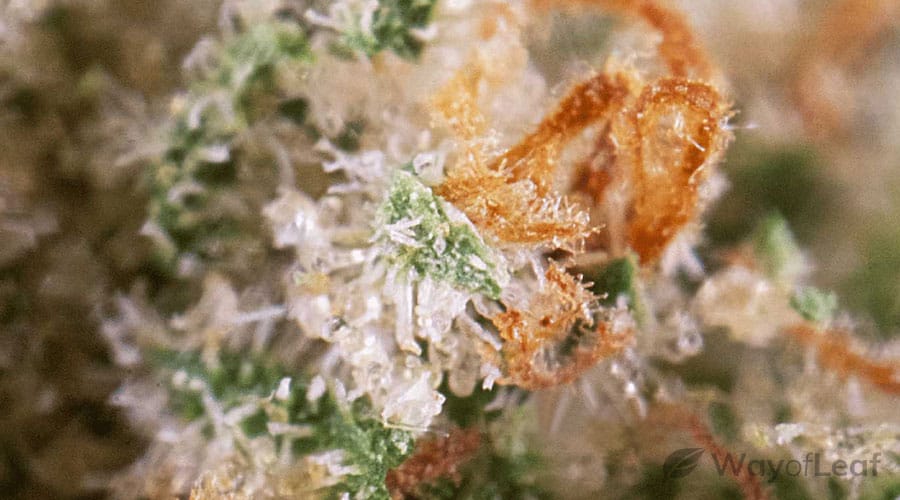 Hydroponics are another commonly recommended system for growing Ghost Train Haze weed, because it typically helps to produce the greatest yields while minimizing planning and preparation. Of course, not everyone is familiar with how to set up and properly utilize a water-based system, especially when it comes down to monitoring and regulating the extra humidity that can be generated from cultivating crops in water. Regardless, if you are up to the challenge, you will likely be rewarded with a bountiful yield… if successful!

When growing Ghost Train Haze, expect an average flowering time of around 9-10 weeks, which means harvest for outdoor crops falls around late October. Indoor harvests typically produce about 10 ounces of bud per meter squared, while outdoor yields can rank in a bit higher at roughly 14 ounces (on average) per plant.

What Kind of a High Does Ghost Train Haze Produce?

Unlike other sativas, the high from Ghost Train Haze is not overly-energizing or hyperactive. Rather, it places its consumer into a state of tranquil creativity, sometimes spiraling the mind off on a wild internal psychedelic journey. Deep internal awareness can also be experienced (primarily in lower doses), but if the “awareness” becomes too much, it could result in a fit of anxiety or paranoia.

| Those who are prone to weed-induced anxiety ought to be wary of the effects of Ghost Train Haze, as it can send the mind of on a wild little internal journey.

For those who don’t experience anxiety often, higher concentrations of GTH can actually affect the body more like an indica, producing tranquil, almost numbing effects (which is perhaps partially where the ghostly name derives from).

Furthermore, haziness and laziness will almost surely be felt, which can halt any kind of real productivity. This can result in sporadic, all-over-the-place thought patterns, though an overall tone of contentness and happiness usually prevails.

For most experienced cannabis consumers, Ghost Train Haze is generally a pleasurable marijuana type, regularly generating intense laughter, excessive giggling, and a blissful mood. Also, as you’ll see below, it can offer truly wondrous medicinal benefits for individuals suffering from a range of ailments.

Medically is where the Ghost Train Haze strain truly shines – numerous individuals have been attracted to the cannabis type for this reason, and in many ways, the strain is viewed as offering “multi-symptom” support (meaning that it is multi-dimensional in its therapeutic uses). 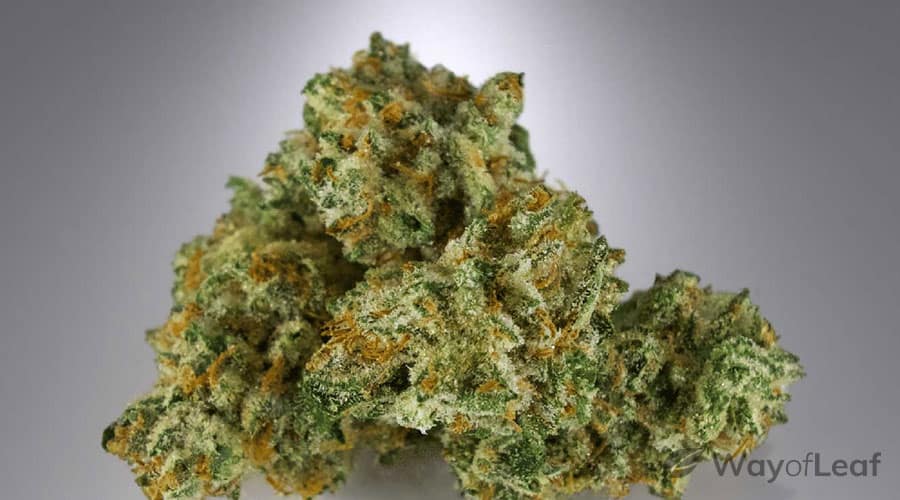 For this reason, GTH is sometimes even recommended specifically by cannabis doctors; in low doses, it has been known to help with conditions like ADD/ADHD, depression, chronic stress and chronic fatigue. Higher doses, on the other hand, are typically more suitable for things like chronic pain, inflammation, arthritis, migraines/headaches, joint pain, glaucoma, muscle spasms, cramping, and other related conditions.

You won’t necessarily need to consume an alternative form of GTH (i.e. a dab or wax concentrate), as the flower itself is immensely strong. If smoking just isn’t for you, however, you should be able to find Ghost Train Haze edibles, concentrates, gummies, candies, tinctures and more — just be wary of that extra bit of potency that concentrates usually offer.

Unfortunately, Ghost Train Haze has been blamed for a few negative side effects in the past, some of which are a bit more serious than you’ll find with other strains.

Of course, the most common adverse effect from GTH (as with most any other strain) is dry mouth (cottonmouth). This is little cause for concern, though, as cottonmouth is easily manageable by drinking plenty of water before, during and after your high. Dry or itchy eyes are also of course a common side effect, but moisturizing eye drops can offer easy prevention and relief.

| The Ghost Train Haze offers an intensely potent cerebral high, but along with it comes a host of potentially adverse side effects.

As mentioned before, Ghost Train Haze is incredibly potent, and should probably not be consumed by novices – especially in higher quantities. The reason being is that paranoia and anxiety are quite common, especially in higher doses and/or among individuals who are prone to THC-induced anxiety (or who have been diagnosed with an anxiety-related disorder).

Dizziness can also occur when consuming larger doses of Ghost Train Haze, which is one of the reasons why it’s best to use caution with the strain. Know your boundaries and start out small, building from there as you feel comfortable to do so.

If you are an individual seeking strong medical cannabis-based relief, or are looking for an alternative to conventional treatments for glaucoma, pain, inflammation, or muscle spasms, then Ghost Train Haze very well might offer the effects you’ve been looking for. The high is intense, and offers potent effects on both the mind and body.

And of course, GTH is an absolute must-try for recreational users who are looking to get stoned off their grandmother’s see-saw. The high is intensely trippy and cerebral, and as we said before, can even resemble the effects of a mild psychedelic drug – especially if consumed in the form of a dab or concentrate.