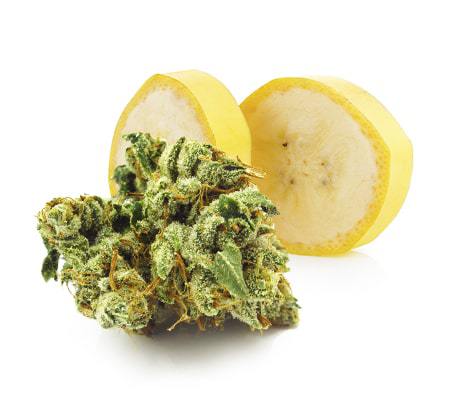 Fat Banana is the result of an extremely selective breeding project run by Royal Queen Seeds (RQS). The aim was to hybridize the largest, fattest Banana OG specimens. RQS believes that this is an all-powerful hybrid strain that will transform the cannabis culture in the near future – it’s that glimmer of a utopian era.

The breeders at RQS sought out the finest genetics and invested the necessary time to engineer Royal Dankness. They started with a rigorous selection program to identify the heaviest-yielding and most potent Banana OG specimens. Then, they worked to blend the most desirable characteristics and eliminate any of the shortcomings associated with the Banana OG line.

RQS aimed to produce and hone a strain that is rarely seen. The result was Fat Banana, a strain with some uncommon features that will likely appeal to connoisseurs, growers, and collectors alike, especially those seeking a unique stash.

Find out more in our complete Fat Banana strain review below.

What Is Fat Banana Cannabis?

Fat Banana is an indica-dominant strain (70% indica / 30% sativa) that was created by crossing the classic OG Kush with Chiquita Banana. It’s a heritage with a lot of power behind it, creating a foundation for the greatness of Fat Banana. This is very clear in the potency of the strain, with THC levels that can reach as high as 25%.

If you’re looking for a potent strain with an incredibly delicious flavor, then this is the strain for you. The mouthwateringly sweet, fruity flavor and mild initial euphoric effects could fool you into overdoing it with Fat Banana. However, it is very potent. Novice smokers should proceed cautiously as the high could easily overpower those who are less experienced. 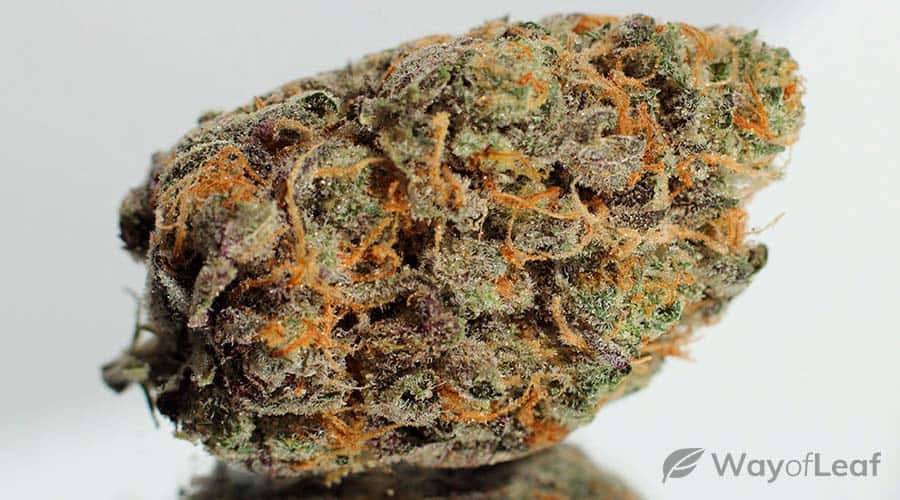 Expect a powerful physical stoned sensation that will start to creep up and take effect sooner or later, followed by an out of this world relaxing experience.

Because it has such high THC levels, just a few tokes of Fat Banana will be enough to take occasional users straight to dreamland, while those with a higher tolerance will have a short moment to enjoy the burst of banana flavor, before a heavy physical couchlock takes over.

All it takes is a few drags to send users into a different realm of consciousness. Also, Fat Banana causes a serious case of the munchies – if you don’t fall asleep before the hunger pangs take effect.

The Fat Banana aroma is of sour bananas and fresh, earthy fruits accented by a touch of sharp citrus.

Fat Banana is known for having a sweet taste that contains hints of citrus. Of course, there is a notable banana overtone that’s accented by earthy and sour citrus flavors.

Fat Banana plants grow bushy, with a large central cola. The top buds don’t grow as fat as some strains, but lower buds are thick, extremely dense, and heavily stacked.

It’s a very frosty plant with a great bud to leaf ratio – this saves a lot of time when trimming. Be careful of the stretch as the plant gets very tall but maintains tight node spacing.

Fat Banana plants flower in around 7 to 8 weeks when grown indoors and can yield an average of 350-400 g/m² under a 600w light. However, growing conditions are best in outdoor environments for this strain.

Outdoors in warmer climates or in the grow-op, you can expect swollen, succulent buds that shimmer with resin. The plant grows up to 140 cm tall and has bushy branches. Untrained plants can grow a bit taller than the average indica bush, resulting in monster bushes that will probably require some support.

By late September, you can expect an impressive harvest that could be tipping the scales. The yield is 450-500 gr/plant when grown outdoors.

Organic cultivation is highly recommended. Besides needing timely doses of bloom boosters, Fat Banana doesn’t have any special feeding requirements. Most plants perform best when exposed to frequent light/medium-strength nutrient solutions. But, excellent yields can be achieved with hydroponics – just be sure to flush.

Fat Banana is an exceptionally potent strain with an already higher than average THC level of 25%. However, some tests have found the THC level to be as high as 28%, which is truly exceptional.

It shouldn’t be surprising to hear that Fat Banana contains only trace amounts of CBD, given that it has a much higher than average THC level. There are only a few strains out there that manage to contain high levels of both CBD and THC.

Thanks to its super high THC levels and high-powered effects, Fat Banana can be used to treat those who suffer from medical conditions such as chronic stress, depression, insomnia, muscle spasms, and appetite loss.

The high is powerful, so you may want to avoid this strain if you’re new to using cannabis. However, if you can handle the Fat Banana high, it’s an excellent appetite stimulant if you have an eating disorder. Furthermore, it can ease you into a deep sleep if you suffer from insomnia.

The Fat Banana high is primarily felt in the body, which makes it great for relieving pain. Being an indica-dominant strain, the body high helps to numb mild to severe pain, which allows the mind and body to relax. Because of the heavy indica base, don’t expect to be very active when using Fat Banana. But if a couch-locked effect and good sleep are what you are after, then you’re going to love it.

Smoking high THC cannabis strains, like Fat Banana, may result in some undesirable effects. Red eyes and dry mouth are the most common physical side effects linked to THC. Although these are only minor inconveniences, they can be very annoying. Be sure to drink lots of water and have eye drops nearby to minimize the problem.

High-THC strains could also cause more serious side effects, such as anxiety and paranoia. While cannabis can be helpful in treating anxiety in small doses, when taken in large doses, it can actually increase feelings of anxiety. This is why it’s so important to dose appropriately. Consuming too much weed is more likely to result in undesirable side effects.

Fat Banana is one of the most recent additions to the Royal Queen Seeds (RQS) family, and it’s quickly becoming a favorite in the cannabis community. Close your eyes and imagine you are out in the tropics – that is Fat Banana.

It may sound like a delight, but this strain is potent. RQS themselves have dubbed Fat Banana as being “for the fearless weed warrior.” Packing up to an impressive 25% of THC, you can expect to melt into a ball on the couch if you overdo it on this strain. It should go without saying that Fat Banana is not for newbies.

It’s best to only use Fat Banana in the late evening or just before bedtime because it will make you almost immobile with surprising speed. Be sure to load up on snacks in case you are still awake through the munchies. However, you will ultimately end up in dreamland, which makes this a great strain for anyone who has difficulty sleeping.

All about this pungent strain

58
6 min read
Join the discussion
TOC
Premium
Your subscription has ended
If you love cannabis and want to support our site, join WayofLeaf Premium today and unlock
Best of all, part of your membership fee will go towards supporting the fight to legalize cannabis.
Sign Up for WoL Premium
Not now
I already have an account
×
Log in to Your Premium Account