Editorial Team
3 min read
0 comments
Cornbread Strain Overview
With a very dough-like and nutty flavor, the Cornbread strain is reminiscent of the Southern baked good itself. It also combines citrus elements within, so it’s super unique in terms of flavor. Cornbread offers its users a heavily relaxing, and arguably sedating, high that is great for smoking before drifting off into a peaceful slumber. This strain is truly just as comforting as the comfort food for which it was named. 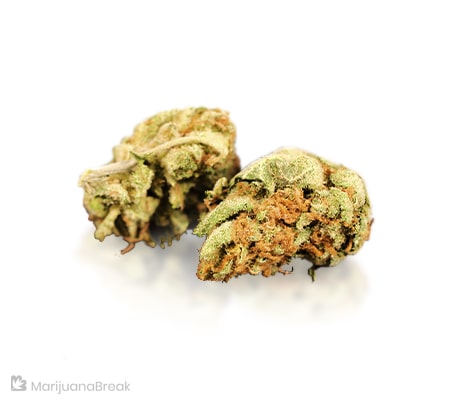 If you’ve ever thought of cornbread as just a good, ol’ southern comfort food, you’re not alone. The word alone may evoke days spent eating with family and friends, or time spent in a warm kitchen. But cornbread isn’t just a dish anymore.

It’s the name of a strain of cannabis that is an exotic indica mix of Rare Dankness #2 and Katsu Bubba Kush. With its honeyed taste, citrusy zest and dough-like flavor, it is considered a fitting homage to its namesake, the Cornbread strain has been touted as a great way to lay back, relax and de-stress.

What is the Cornbread Strain?

Cornbread strain is an indica-dominant cross between Colorado-based Rare Dankness #2 and Katsu Bubba Kush. This particular strain is about 20% sativa and 80% indica.

The Cornbread strain has a very powerful smell. It can be detected once out in the open, so users prefer to double bag or wrap it. It has been said to have a strong lemon and earthy, pine scent.

Cornbread has a unique, smooth citrus taste rounded with a nutty undertone which also includes berry and floral influences upon the inhale. On the exhale, you may detect the musky, dank taste that is, according to users, potent but not unpleasant.

Cornbread strain weed is marked by circular, tight flowers that give hints to its indica heritage. Its leaves are bright and verdant, and it has varying shades of color including purples and reddish gold. Cornbread is extremely sticky due to a high concentration of trichomes. Like its parent, it has a rich, dank odor.

Cornbread strain seeds are pretty versatile and can be grown either indoors or outside. However, growers must be aware that it exudes a potent aroma during the growth process. If this strain will be grown outside, consideration must be given to the overall climate.

The Cornbread strain thrives in weather that is semi-humid and boasts temperatures that are at least 70 degrees Fahrenheit. Growers can increase its potency by growing it at a colder temperature just before its flowering phase. It is recommended that growers regularly prune and trim cornbread strain plants. This will encourage better growth as well as light and air distribution.

If growers are looking for a higher yield, it is recommended that they grow indoors. At least half – or worse, more – of the yield will be male. To produce more calyx-filled buds, growers should soak the seeds before germination. If the seeds are grown indoors, growers can usually harvest within 9 to 10 weeks.

Cornbread cannabis has a very potent and distinctive lineage. Due to its indica background, it has THC levels that can range from 15% to 20%.

The Cornbread strain has only negligible levels of CBD.

Cornbread weed may confer some medical benefits. Its sedative effect can be used to address a variety of sleeping disorders, including insomnia. Users have also used the strain to mitigate feelings of nausea, headaches, and to increase appetite. It has also been used to address anxiety. Anecdotal accounts reveal that the Cornbread strain may in fact be a useful tool against stress and depression.

Possible Side Effects of the Cornbread Strain

Users have reported intense feelings of sleepiness and relaxation. It has been indicated to improve mood and to stimulate feelings of hunger. Other users have experienced euphoria, decreased levels of depression, and an overall sense of calm.

With the Cornbread strain, there are also possible adverse effects including dry mouth, dizziness, dry eyes and headaches. Some effects that others may find pleasant, like tingling and movement effects may be unsettling to some users. Others may find that this strain may increase paranoia.

Final Thoughts on the Cornbread Strain

Cornbread strain is a great option for anyone who is looking to relax. It has powerful sedative capabilities and is useful for encouraging hunger. Its citrusy flavor with a combination of earthy, pine undertones is pleasant for most users.

If it is to be grown outside, it has to be grown in a semi-humid environment with temperatures at or above 70 degrees. This can be a problem for anyone living in temperate states. It has a very distinctive aroma and care must be taken if it is grown outdoors.

However, if users can maintain a stable and warm environment indoors, it has a higher yield and can be quite potent if exposed to colder temperatures just before its flowering state. It has a relatively short growing time at 9 to 10 weeks.

When using Cornbread, it can be slow starting during its onset, but ends with a very intense kick. The plants are very sturdy and resistant to mold and mildew. Users have reported that, overall, it is a robust strain with a pleasant flavor and delicious taste.