Written by John Killerlane, B.A., HDip
5 min read
0 comments
Read Later
California Sour Strain Overview
California Sour is a perfectly balanced hybrid strain that offers cannabis consumers the best of both worlds. Its initial effects are both uplifting and energizing. As the high begins to fade, it is replaced by a heavy body stone and a feeling of deep relaxation. 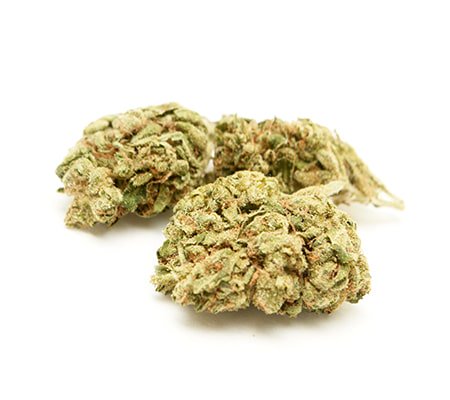 People often confuse California Sour with its very similarly named and entirely separate sister strain California Sour Diesel. The latter is a sativa-dominant strain with an exceptionally high THC content. The former is a well-balanced hybrid that offers cannabis consumers the best of both worlds.

What Is the California Sour Strain?

The California Sour strain is a perfectly balanced hybrid with a 50:50 indica to sativa ratio. California Sour’s exact lineage isn’t known. However, its genetics are most likely a fusion of a Mexican sativa and an Afghani indica.

Like most well-balanced hybrids, California Sour’s initial effects are predominantly sativa in nature. To begin with, the effects are euphoric, uplifting, and mood-enhancing.

A short-lived rush of energy accompanies these effects but tends to fade later on. It is essential to be aware that California Sour’s energizing effects can lead to racing thoughts in some people. Therefore, novice smokers may find this strain a little too overwhelming.

Most say that it induces a feeling of giddiness, which makes it a great social strain. Reportedly, this strain can cause the munchies too, so it is a good idea to have some snacks nearby.

About an hour after first consuming California Sour, you can expect its effects to start tilting towards the indica side. The initial energizing effects begin to dissipate, and a heavy body stone takes hold.

In this deeply relaxed state, your mind and body will start to slow down. Your thoughts will no longer be racing, and you will begin to feel calmer and more mellow.

As you can imagine, California Sour’s initial and latter effects are night and day in nature. The initial sativa effects are relatively short-lived, and this strain’s indica effects tend to last longer. Therefore, this strain is much better suited to evening rather than daytime use.

California Sour’s flavor won’t be to everyone’s liking. It has a strong diesel taste, which will be off-putting for some. Milder fruity notes offset this strain’s more robust flavors. However, these are overpowered by its stronger flavors.

This strain’s diesel and orange-flavored notes are most prominent on the exhale and tend to linger in the aftertaste.

Burning California Sour weed produces thick and harsh, cough-inducing smoke, which can be severe on the lungs, nose, and eyes. If you are looking for a mild and creamy smooth smoke, you won’t find it with California Sour.

Appearance-wise, a California Sour plant is short and bushy with strong lateral branches. Its buds are indica in structure, and its flowers are chunky and heavily coated in a layer of sticky, white, resinous trichomes.

This plant’s dark-forest-green leaves turn tightly in toward their central stems. Growing prominently among the plant’s leaves is its pistils, the plant’s female reproductive organs. These pistils range in color from vibrant orange to dark brown. 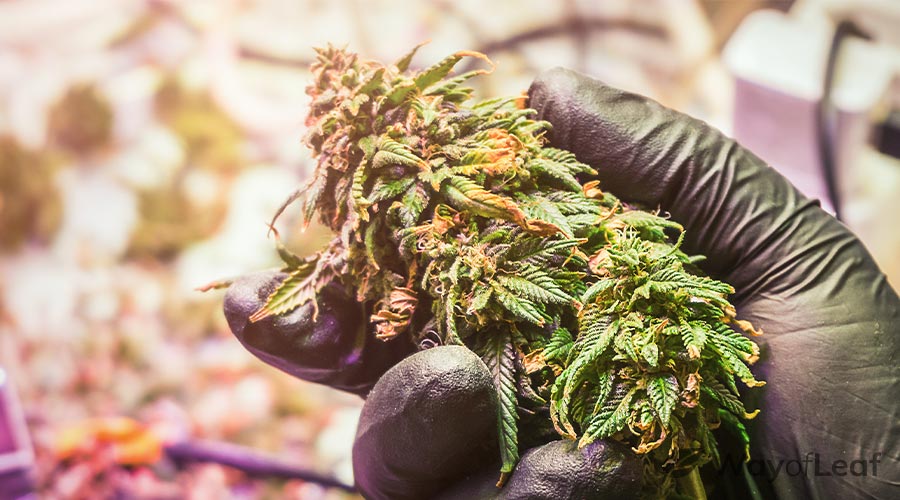 A California Sour plant’s growth difficulty is rated as moderate, so it may be too challenging for a novice grower. As mentioned, this plant tends to grow relatively short and bushy. It produces strong, lateral branches, so some pruning will be necessary to keep its shape under control.

The good news is that this plant can be grown indoors or outdoors. It especially thrives outdoors in a warm and sunny climate, akin to California.

When you grow it indoors, the flowering period for a California Sour plant is between nine to ten weeks. Outdoor growers can expect this plant to be ready for harvesting by early-to-mid-October.

While California Sour has a very low CBD content, it does have many potential health benefits attributed to it. California Sour consumers say that its uplifting effects offer temporary relief from the negative feelings associated with mood disorders like depression and anxiety.

While California Sour’s energizing effects are short-lived, it does offer a brief energy boost to consumers of this strain. Therefore, if you are suffering from fatigue and need a short energy boost, then California Sour could possibly provide it.

As mentioned, California Sour’s energizing effects wear off relatively quickly and are replaced by a feeling of deep relaxation. These indica effects can help to soothe the body and calm a troubled mind. Therefore, California Sour’s latter effects could benefit cannabis consumers in need of stress relief.

Consumers of the California Sour strain say that it effectively alleviates a whole host of painful conditions. Some of the conditions that California Sour is said to relieve include arthritic and muscular pain, lower back pain, and headaches.

Some consumers of this strain say that its relaxing effects become soporific in their latter stages. This, perhaps, may make the California Sour strain useful for people with insomnia, too.

Possible Side Effects of the California Sour Strain

The most common side effects associated with the California Sour strain are cottonmouth and dry eyes. However, some consumers of this strain say that they also experienced heightened anxiety and paranoia.

These feelings of anxiety and paranoia may be exacerbated by California Sour’s tendency to cause racing thoughts. Some novice cannabis consumers may find this strain too potent, and its energizing effects to be unsettling and overwhelming.

Even if you are an experienced cannabis consumer, it is advisable to pace yourself with this strain. California Sour’s THC range can be as high as 20%, which is quite potent, and perhaps too high for a novice smoker.

As California Sour’s indica effects lead to a deep body stone, couchlock may be an issue with this strain. Whether or not you end up couch-locked will likely depend on how much of this strain you consume in one sitting.

It is vital to bear in mind that some consumers of this strain have experienced racing thoughts due to its energizing effects. This could exacerbate feelings of paranoia and anxiety in some cannabis consumers.

For this reason, California Sour may be unsuitable for a novice cannabis consumer. However, more experienced cannabis lovers will likely enjoy the contrasting nature of this strain’s effects.

3
3 min read
Join the discussion
TOC
Premium
Your subscription has ended
If you love cannabis and want to support our site, join WayofLeaf Premium today and unlock
Best of all, part of your membership fee will go towards supporting the fight to legalize cannabis.
Sign Up for WoL Premium
Not now
I already have an account
×
Log in to Your Premium Account