Written by Editorial Team
4 min read
0 comments
Blue Velvet Strain Overview
Blue Velvet, also known as Blueberry Thai, is an evenly balanced hybrid strain that was bred by DJ Short. It’s fast-acting and provides an uplifting sensation that often results in feelings of euphoria. The high is known to leave the user feeling relaxed in both body and mind, and as the body starts to feel at ease, the mind will want to work as focus increases and creativity surges. 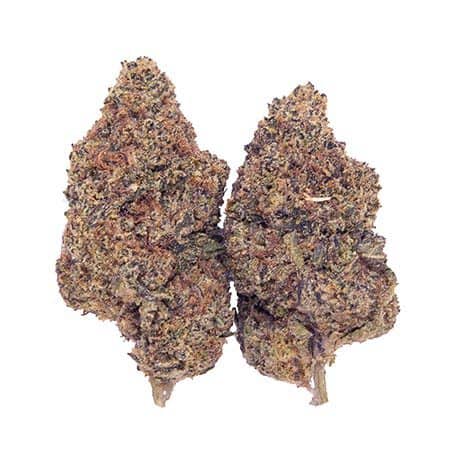 People use cannabis for different reasons. For many, it’s the uplifting effects it offers, while others enjoy the complete body relaxation it delivers. But there are hundreds of strains out there, and we now know that people don’t just love cannabis for its recreational properties, it may also offer a ton of medical benefits.

In reality, the reason cannabis may be so beneficial to those with chronic illness is due to the body and mental high it gives. Hybrid weed strains are a great option because they are the result of crossing two or more marijuana plants, typically one sativa and one indica. This means that rather than giving a full-blown sedative sleep crash or energy rush, they offer a more balanced combination of sativa and indica effects.

Blue Velvet cannabis is a unique hybrid that is known for the energy boost it offers along with some more pronounced sativa effects. The strain was bred by DJ Short in the Bay Area a number of years ago. Somehow it found its way to the Dutch scene and is more widely available today.

What Is the Blue Velvet Strain?

The Blue Velvet strain, also often referred to as Blueberry Thai, is a 50/50 hybrid strain (50% indica/50% sativa) that is named for the lush appearance of its plants. It’s an evenly balanced, smooth cross between Afghani and Purple Thai that induces a velvety high worthy of its name.

Blue Velvet has a moderately high THC level ranging between 18-20% and boasts very well balanced effects – true to its heritage. Users describe the high of this strain as fast-hitting, providing an uplifting cerebral head high that will crash into you with waves of creative energy and focus on getting work done. 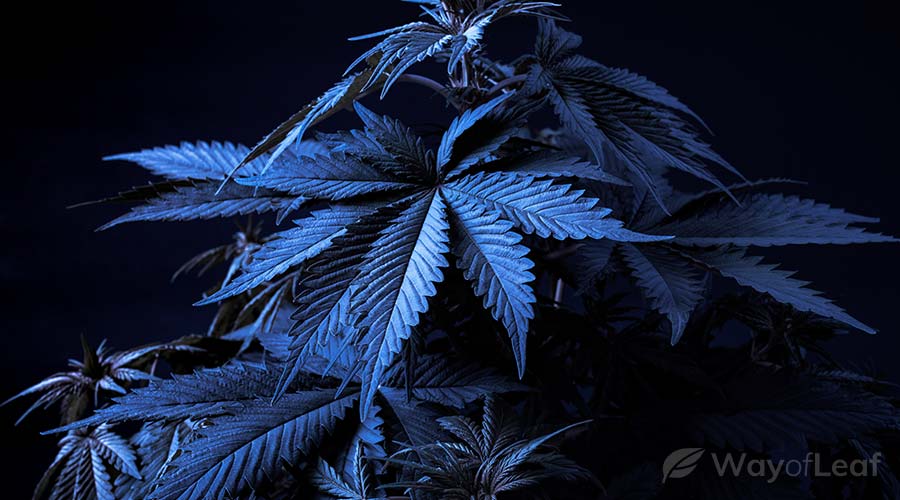 Since Blue Velvet is fast-acting, you can expect the effects to hit moments after using it. After a few tokes, you can expect an uplifting sensation, and as it continues to intensify, you are likely to start feeling euphoric. There are some strains that can induce a hazy mind, but this isn’t one of them. Instead, most users will have a clearer head. It also unleashes creativity.

Most users also experience a surge of energy that helps them to complete tasks. As the effects begin to creep down to the body, most people remain clear-headed. Simultaneously, there is a heightened ability to focus.

It won’t take long for the indica side to start taking over the body. At this point, most users will feel completely relaxed, and a potent buzz will spread throughout the entire body. If users overindulge, it will likely lead to laziness.

The Blue Velvet aroma is reminiscent of sweet berries and freshly-churned earth. You will also notice a strong scent of blueberries – hence the other name used for this strain, “Blueberry Thai” – accompanied by a spicy and earthy odor.

Much of how this strain smells, carries over to its flavors. You can expect a taste of sweet blueberry chai tea with a savory aftertaste.

The Blue Velvet buds have long, foxtail-like nugs that are dark olive-green and have a layer of bright scarlet red hairs with amber undertones. The nugs are dusted with fine, sandy, milky-white trichomes and are covered with a sticky, sweet layer of visible resin.

Blue Velvet is considered to be an easy-to-grow strain. It has a sturdy structure and strong branching (thanks to the landrace genetics) and thrives in both indoor and outdoor environments.

Indoors, the flowering time on this gem is about eight weeks. By training and topping the plant early, it’s possible to keep it under two feet. Once it’s ready for harvest, you can expect a yield of around 10 ounces per square meter.

Outdoors, the Blue Velvet plant can grow up to nine feet tall. If growing weed isn’t a concern to you, then watching this plant grow should be fun. Each plant will produce around 10 ounces of bud, and the flowering time is usually between September and October.

The Blue Velvet THC content level could reach as high as 22%, which means that users shouldn’t underestimate it. Newbies will probably be better off using a gentler strain, to begin with.

There is no information on the CBD level of Blue Velvet, which means that it probably contains just about no CBD. At most, this strain will have traces of the cannabinoid.

The boost in energy makes Blue Velvet a beneficial strain when it comes to helping users to get things done. In other words, it can be a very helpful strain to help individuals deal with fatigue. Blue Velvet is known for increasing energy levels, so if you’re feeling lethargic, it may help you to get up and get moving.

Furthermore, thanks to its ability to induce euphoria, Blue Velvet may also be useful in treating behavioral problems. For example, some medical cannabis users claim that it helps them to deal with depression.

Consuming this strain can also cause a severe case of munchies. This means that it may be helpful to those who need help with stimulating the appetite, i.e., it could help with conditions like anorexia.

Lastly, the sedative-like properties stemming from the indica side of the plant means that it could also be useful in relieving pain. As such, it could help users who are dealing with arthritis, muscle spasms, and other disorders.

Possible Side Effects of the Blue Velvet Strain

Like all cannabis strains, there are a few potential adverse reactions associated with Blue Velvet. Many people may experience varying degrees of dry eyes and a dry mouth. The higher the dose you consume, the more pronounced these symptoms will be.

Some users may also experience a headache during the duration of the body and mental high. Moreover, in rare cases, a few people may feel dizzy or a little paranoid.

If you enjoy the Purple Thai or Afghani strains, you are sure to love Blue Velvet. It’s the perfect blend of the two, taking all of the best properties and compounding them into something very special. It’s the ideal strain if you’re looking for motivation and focus to finish a task, or if you simply want to relax with a snack and a good movie.

Blue Velvet doesn’t offer as much medicinal potential as many other cannabis strains, but it is perfect for anyone wanting to uplift their mood and experience bouts of euphoria.