Written by Editorial Team
8 min read
0 comments
Blue Power Strain Overview
Powerful like a shockwave and deeply satisfying, Blue Power is a strain you definitely need to try if you are looking for pleasant and deep feelings of pure relaxation. 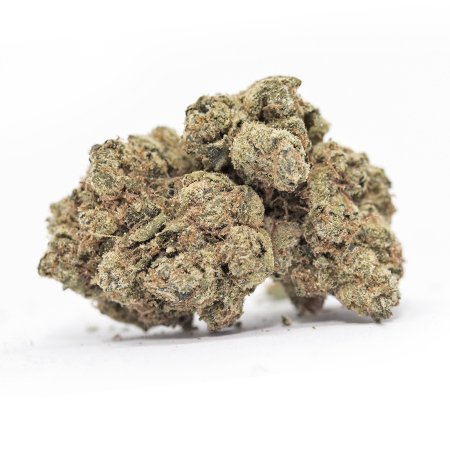 There are many reasons to look for robust indica varieties. Some people just want to chill out, whereas others are looking to pass out at the end of the high completely.

Let’s examine the Blue Power strain and figure out just what it is that makes it so powerful.

What Is the Blue Power Strain?

Sin City Seeds developed the Blue Power strain. It is a strain breeder suitably named after its home city of Las Vegas. The original genetics for Blue Power are a variety of well known and potent strains, such as Master Kush and Blue Moonshine. Sin City Seeds have perfectly distilled these incredibly potent strains into Blue Power, lending it a huge THC concentration and plentiful effects. 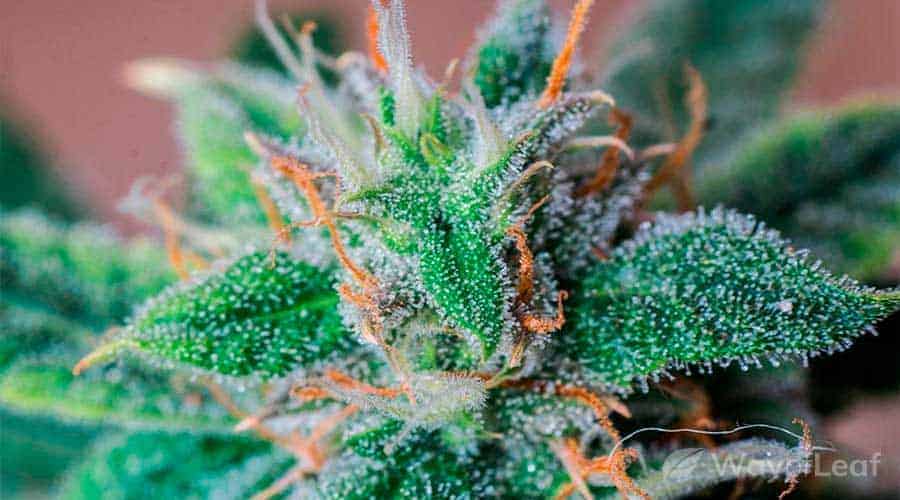 Annoyingly, there is actually more than one Blue Power strain; other growers have also developed similar strains with identical names, so make sure that you pick up the Sin City Seeds variety if you are looking for this one.

The effects of this strain are engaging in the beginning, as it takes a surprisingly large amount of time to take effect.

After you take your first puff of Blue Power, it might be several minutes before you actually realize that anything is happening. However, before you go and smoke some more out of a fear that you didn’t smoke enough, you will slowly realize that relaxation has begun seeping across your whole body.

This feeling of gentle, soothing calmness stretches across your body, all the way from your head to your toes. Don’t be surprised if, after this high begins to take hold, you find yourself wanting to take refuge somewhere comfortable, possibly adorned with thick blankets.

However, this isn’t just a strain to induce feelings of collapsing, all-encompassing tiredness. You won’t just fall down into a pile of woolen blankets and sleep the day away; you will also feel intellectually inspired.

There is a bright burst of focus that follows that intensely enjoyable sensation of calm and chilled out contentedness. It can help you enter into a creative mindset; potentially one that is amazing for encouraging you to write, paint, or just enjoy life to the fullest.

At the end of the high, there is a decent amount of couchlock, that familiar feeling of wanting to just sit down and chill out, potentially even forcing you to find the nearest comfortable surface no matter what you are doing.

Though it isn’t as prolific as with other strains, you can expect to feel gradually sleepy towards the end of the high. However, this only really takes effect if you smoke a sizeable amount.

What about its flavor and aroma profile, though? How does it smell?

The aroma of Blue Power is pretty surprising considering the chilled out vibe of its high. It has a pretty intense lemon smell, but some pretty striking, contrasting flavors of bright, woody berries undercut it.

There is also a suitable amount of hash, pretty typical of a strain with Blue Power’s genetics. However, it isn’t enough to overpower the upfront sweetness and lemon flavor.

While the aroma is suitably delicious, especially when you get the chance to get up close and smell it correctly, what about its actual taste? Does its flavor hold up to its aroma?

After the smoke of this relaxed strain hits your tongue, you might expect to find the taste to match what it smells like perfectly.

However, instead of that burst of lemon and bright berry flavor, the hash quality is far more prominent. It is vaguely spicy and quite earthy, almost coating your tongue and leaving you feeling smothered by marijuana intensity.

The smoke is also decently smooth, though it can feel a bit acidic towards the end, reminding you of walking into a laundromat rather than enjoying pleasant marijuana flavors. That doesn’t make the experience unpleasant, though. Instead, it’s actually quite refreshing.

What about how it looks? What is the appearance of the Blue Power strain like?

Blue Power bud itself is distinctly green, as most buds are. However, there are a number of unique characteristics that make it subtly different from other marijuana strains. Behind all that lovely green is a bright intensity of orange from the long pistils that poke out onto the surface.

There are also a few strange shades of blue that remain hidden beneath the leaves, as well as the odd spot of purple if the bud has been properly dried, and it was grown in a colder climate. It also has plentiful amounts of that lovely, sticky resin that consists of white trichomes that only ever coat the very best of marijuana buds.

Blue Power strain seeds can be found at most retail establishments. However, probably the most accessible place to pick them up is from Sin City directly. Fortunately, Blue Power seeds are one of the most natural strains to find seeds for with regard to ease. So long as you are looking primarily within the western world, that is. When you get your own seeds, the process of growing your own Blue Power is actually pretty simple.

You can easily grow it either indoors or outdoors without too much difficulty. However, you need to make sure that if you do grow it outdoors, you keep it within a fairly consistent temperature. This strain enjoys warmer temperatures, so if it regularly dips below 72 degrees or above 80 degrees during the day, you might consider growing indoors instead.

After pretty standard eight or so weeks, your plants will flower, but won’t really give you too much bud. To help encourage its yield, practice regular topping by trimming off the very tip of the plant as it grows. This will help to promote healthy bud production.

You also need to keep it reasonably well fertilized and watered, as this strain can sometimes absolutely devour water. All this means that Blue Power is a strain to keep an eye on and practice some mid-level maintenance. It is an excellent strain for those relatively experienced growers that want to try their hands at working with a slightly more complex, yet still a decently comfortable strain.

Once you get all your bud harvested from Blue Power, drying it as quickly as possible to help ensure the tender, delicate pistils don’t get damaged, what can you hope for? What kind of final cannabinoid can you expect?

When you get a chance to sample a potent strain like Blue Power cannabis, there is a reasonable expectation of having a sizable quantity of THC.

Blue Power possesses one of the largest loads of THC imaginable in marijuana buds; some samples have been tested as having as much as 27%. However, different samples of Blue Power may have wildly varying levels of THC, so it is possible that your own example of Blue Power might not reach these lofty heights.

What about CBD, though? Are there any comparable levels of CBD within Blue Power?

As with basically every example of a potent marijuana strain that possesses astronomical levels of THC, there isn’t really any CBD to speak of in Blue Power.

All the CBD that used to be within Blue Power’s parent strains has sadly been bred away, leaving behind little else other than the high levels of THC.

However, just because there isn’t really any CBD to speak of does not mean that there aren’t any medical benefits to the Blue Power strain.

Thanks to the deeply, intensively powerful physical effects of the Blue Power strain, smoking just a little bit of Blue Power is the perfect way to handle pain. Even though it lacks CBD, it still has plenty of the significant effects on your endocannabinoid system, helping to curtail inflammation and normal pain responses.

Furthermore, the pleasant sensation of relaxation that persists throughout the high is an excellent way of dealing with adverse stress, or many other mental conditions. Being able to completely zone out and ignore the pain and confusion that you might be dealing with on a day to day basis is a wonderful way to make the day a bit better.

Though many people might not consider this a proper medical problem, Blue Power is a great strain for helping to tackle creative blockages.

The best part, though, is the gradual diminishing returns on the high that fade away into comforting tiredness. This makes it perfect for dealing with insomnia, as you can easily take this strain towards the end of the evening, enjoy it’s blisteringly relaxing high, then drift off to sleep warm and contented.

This also helps with those that struggle with anxiety or anxious thoughts in general, as this strain can help banish those thoughts and send you into a more peaceful place.

Finally, there are some people who use Blue Power to treat ongoing conditions like period pain, but also gastric issues arising from IBS or similar conditions. Blue Power helps these problems because it is able to help soothe your entire body, making it seem like cramps or general pain isn’t something worth worrying about.

However, there are always going to be a few unpleasant side effects. What kind of side effects can you expect to experience from the Blue Power strain?

Possible Side Effects of the Blue Power Strain

Like pretty much every other high THC strain, Blue Power is a strain that will hit you with mighty dry mouth and dry eyes almost immediately after imbibing it. This pair of irritating side effects are familiar to all experienced marijuana users. However, it is easy enough to deal with. Simply make sure to keep a drink of water handy, and maybe increase the humidity of your room if you are really worried about it.

Most strains that have a lot of THC will generally be well known for inducing anxiety as a pretty frequent side effect. However, Blue Power is a bit different as it doesn’t really inspire such feelings, instead of giving you plenty of pleasant sensations and calm thoughts.

The only other real consequence of this strain is occasionally struggling to stay conscious when you really just want to lie down and close your eyes. If this is a severe concern for you, you might only want to consume Blue Power in small doses, so as to avoid that desperate sensation of wanting to go to sleep.

Blue Power is, above all, a potent strain. This doesn’t just refer to its pure THC concentration, nor its intensely potent effects, but instead to the whole experience of smoking it.

The flavor and aroma are mind-blowingly potent, giving you vast, conflicting sensations and flavors. You feel the effects throughout your body, soothing your very soul. Meanwhile, the aroma and even the aftereffects feel like a shock from a particularly mighty hammer.

For those looking to experience something extraordinary, powerful, and noticeable, definitely pick up Blue Power at your next trip to a dispensary. You will have more luck if you live on the west coast (or in Amsterdam!), but, if not, feel free to order some seeds from Sin City and simply grow your own instead!