Written by John Killerlane, B.A., HDip
5 min read
0 comments
Blue Moonshine Strain Overview
Blue Moonshine is a strain that's best-suited to evening-time use. While its early effects are euphoria-inducing and uplifting, soon after, you'll fall into a deep body stone. Don't be fooled by this strain's sweet and blueberry aroma; it will leave you couch-locked and heavily sedated. 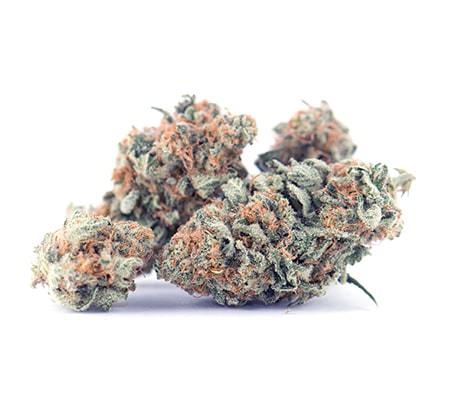 Blue Moonshine is one of five strains that belong to the Blue family of cannabis strains. In case you are wondering, the other members of the Blue family are Blueberry, Flo, Blue Velvet, and Blue Heaven. Legendary cannabis breeder DJ Short developed these five strains during the 1980s and 1990s. They are the result of crossbreeding strains, which are pretty genetically diverse.

The five Blue family strains are the result of crossbreeding strains, which are pretty genetically diverse.

For example, one of the parent strains is a Mexican sativa named Oaxacan Gold. Two others are Thai Landraces, namely Highland Thai and Chocolate Thai. The final parent strain is the almost purely indica Afghani strain.

The Blueberry strain is perhaps the best-known member of the Blue family. Maybe the time has come for Blue Moonshine to step out of its more famous sibling’s shadow and really ‘shine.’

What Is the Blue Moonshine Strain?

The Blue Moonshine strain is a hybrid cross between the purely sativa landrace Thai strain and the indica Afghani strain. Blue Moonshine is a heavily indica-dominant strain with a 90:10 indica to sativa ratio.

Despite having a relatively modest average THC level of around 14.5%, Blue Moonshine is considered a pretty heavy-hitting strain. While its early effects are more pleasant than overwhelming, its latter indica-dominant effects are incredibly potent.

Blue Moonshines’ initial effects are purely sativa in nature. You can expect a pleasant feeling of euphoria that will leave you uplifted and happy.

However, as the initial high gradually begins to dissipate, Blue Moonshine’s indica genetics come more to the fore. The cerebral high fades and is replaced by a deep body stone. 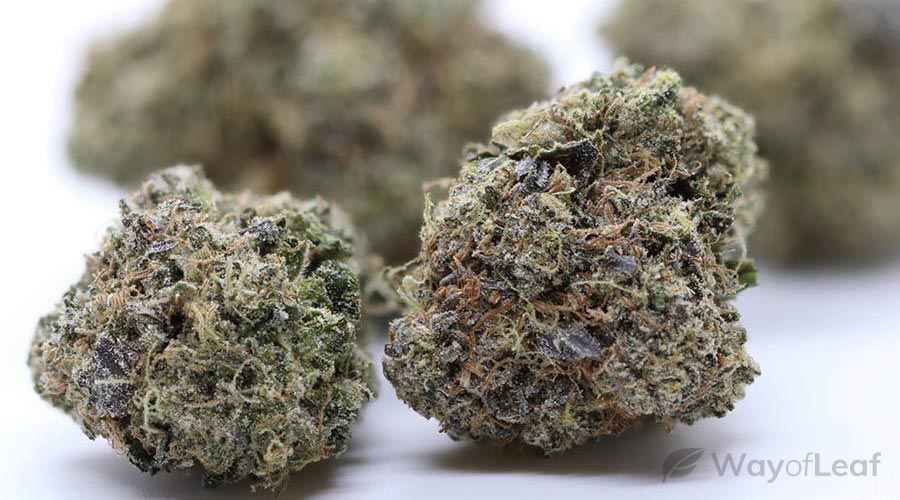 Some reviewers of the Blue Moonshine strain say that it causes them to think more creatively and abstractly. This, perhaps, could make Blue Moonshine suitable for artists and creative types in search of a little inspiration.

Blue Moonshine’s deeply relaxing effect on both the body and mind often leads to feelings of drowsiness. For this reason, Blue Moonshine is becoming an increasingly popular strain for medicinal smokers with insomnia.

Another thing to note about this strain is its effects are renowned for lasting longer than your average strain. This is another reason why Blue Moonshine is much better suited to evening rather than daytime use.

Blue Moonshine’s characteristic fragrance and its membership of the Blue family of strains is what gives it its name. Its aroma is sharp and fruity but is also pungent enough to resemble a fermenting homebrew.

Blue Moonshine’s fragrance is very intense and tends to linger, particularly in an indoor grow room. Other notable aromas include blueberry and molasses, which become particularly noticeable when grinding this strain’s dried and cured buds.

Blue Moonshine’s sweet and fruity blueberry notes are more prominent when inhaling its thick, harsh smoke. While the taste is pleasant, the smoke produced can be cough-inducing and can also lead to dry eyes.

If you are looking for a smooth and mild strain, you won’t find it in Blue Moonshine. Some Blue Moonshine smokers say that its fermented fragrance is also reflected in its aftertaste on the exhale.

Blue Moonshine plants are typically short to medium in size and tend to range between three to five feet in height. A mature Blue Moonshine plant has a generous coating of sticky, resinous trichomes, which gives it a frosted appearance.

When exposed to colder temperatures before the flowering stage, Blue Moonshine’s buds can turn purplish and blue. These beautiful hues complement its overall frosted appearance nicely.

The good news is that Blue Moonshine’s growth difficulty is rated as easy. Therefore, it is an excellent choice for a novice grower. It is resistant to mold and mildew, which makes this plant reasonably low maintenance.

A Blue Moonshine plant will thrive in a warm and sunny outdoor climate, but it also does well when grown indoors. However, one downside is that it is a pretty moderate yielder.

When growing Blue Moonshine, it is more appropriate to consider the return in terms of quality rather than quantity.

The flowering period for Blue Moonshine is usually between eight to nine weeks. If you are growing your plants outdoors, then mid-October is the ideal time of year for harvesting.

The highest known THC content recorded in a sample of Blue Moonshine is believed to be 16%.

The highest recorded CBD content from a sample of Blue Moonshine is 0.91%.

Blue Moonshine’s ability to relax both body and mind may offer temporary relief from chronic stress. This strain is commonly used by both recreational and medicinal smokers to help them relax and unwind.

Reviewers of the Blue Moonshine strain say that it helps to alleviate a wide variety of painful conditions. Some of these include muscle and joint pain, lower back pain, and headaches.

Blue Moonshine’s initial uplifting and euphoric feeling may offer short-term relief to those with mood disorders like depression and anxiety.

As already mentioned, Blue Moonshine is becoming increasingly popular with medicinal cannabis consumers with insomnia. This is down to a combination of its soporific effects and the longer-than-average duration of these effects.

Possible Side Effects of the Blue Moonshine Strain

The most commonly reported side effects attributed to the Blue Moonshine strain are cottonmouth and dry eyes. Most will agree that this is a small price to pay for the potential benefits this strain offers. A bottle of water and some eye drops can help to alleviate these common side effects.

However, if you overindulge on this strain, then it is highly probable that you will end up couch-locked. Some reviewers of this strain say that the couch-lock they experienced with Blue Moonshine was particularly unpleasant.

They described a sensation of numbness and disconnection from their bodies while couch-locked. So it is essential to bear this in mind before consuming Blue Moonshine. Others reported that they also experienced dizziness and heightened anxiety after consuming this strain.

These powerful effects make the Blue Moonshine strain unsuitable for novice smokers. More seasoned recreational or medicinal cannabis consumers who don’t overindulge shouldn’t experience anything other than its more common side effects.

Despite its relatively modest THC level, Blue Moonshine packs a punch comparable to a potent homebrew. Less is definitely more when it comes to consuming Blue Moonshine.

Blue Moonshine is a great evening strain that will leave you feeling mellow and deeply relaxed.

Due to its powerful effects, Blue Moonshine is more suitable for an experienced recreational or medicinal cannabis consumer. Apart from its pretty intense aroma, its tendency to leave consumers couch-locked is another noteworthy feature of this strain.