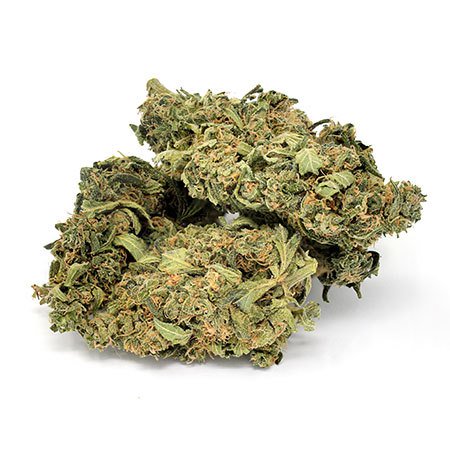 The Blue Kush strain stimulates the mind while relaxing the body. It channels bits of its parent, the smooth and effervescent OG Kush, for its heady high and its chill let-down. Meanwhile, its other parent, the Blueberry strain, bequeaths elements of its complex and sweet, fruity taste.

Blue Kush is sativa-dominant but gets some indica qualities from a host of other famous ancestors. This includes the possible likes of Chemdawg and a lineage traced back to Afghani. Its rich heritage lends a condition that, while not as potent as some heavy hitters, is wonderfully subtle and pleasant.

The Blue Kush strain isn’t as massive as some buds. However, this doesn’t stop it from being impressive. It sports a range of colors, with some tints of blue and green. Its compact buds hold nuggets of sticky trichomes.

Its THC level is perfect for those seeking a bit of a high without the harshness. It isn’t too much for a newbie to toke. And as long as users abide by the low and slow rule, each sesh should be one that is fun and relaxing.

The great thing about Blue Kush is that unlike some strains, it’s great to take during the day. Most users won’t have to worry about feeling couch-lock, and although there is a definite body high, most can go about their usual routine. This strain is perfect for doing chores around the house, light exercise, or some creative activities.

What Is the Blue Kush Strain?

Blue Kush weed contains both indica and sativa elements. It is, however, more sativa. It has an exotic background with influences from strains such as the sativa Purple Thai and Hindu Kush. It is also the offspring of two well-known varieties: Blueberry and OG Kush.

The Blueberry strain is the result of a three-way cross between a few strains. OG Kush, however, has origins that are a bit murkier. Most aren’t sure where OG Kush’s roots truly lie. Despite its somewhat mysterious origins, Blue Kush carries forth its ancestry with a mellow hit that winds down softly. It is a flavorful strain, and users cite its fruity notes and its sweet undertone as part of the reason why they love it. 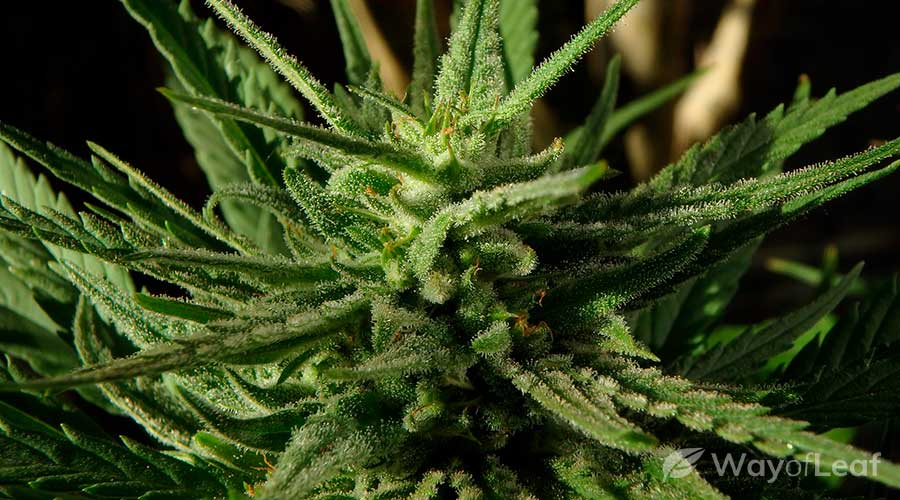 Blue Kush has a high that begins slowly. It builds in intensity before leveling off. The steep drop isn’t as steely as some strains, and many users find they enjoy the cerebral rush and Blue Kush’s relaxing nature. This is excellent news for those that aren’t seeking a soporific kind of high.

Blue Kush may increase focus and fuel some creative juices. Users state that Blue Kush is an excellent strain for those desiring a little extra mental push while reducing symptoms or just looking to de-stress. Blue Kush may inspire as well as incite a social atmosphere. Blue Kush is quite conducive to an evening spent with friends, whether sitting around a fire or enjoying a rousing card game or two.

Blue Kush is quite popular with many users. However, for those looking to get a buzzy, hard high, this strain may prove unfitting. The strain’s laid-back and sedate, heady profile makes it a smooth ride.

The Blue Kush strain has a pleasant aroma profile. It has some delightful fruit and berry smells as well as a tinge of wood and pine. Users may also detect an undertone of lemon followed by a fresh, floral bouquet.

Users may glean hints of rich earth and some deep herbal elements. Tokers may notice that this strain doesn’t overwhelm the olfactory senses. When consuming this strain, the smell isn’t excessively cloying or pungent. Instead, the scent is light, fragrant, and tantalizing.

The Blue Kush strain presents users with a plethora of full-bodied flavors. The inhale reveals a burst of ripe, sweet, blueberry flavor. A user’s palate may feel teased as well by notes of citrusy lemon, followed by a sliver of pine and wood.

Blue Kush is exceptionally striking. The strain has buds that are tightly furled but are numerous. They sport brilliant streaks of green, blues and violet. Bright orange pistils run throughout the nuggets. The buds are also covered in a layer of frosty, sugary trichomes, making the strain resinous and sticky.

Its leaves are just as eye-catching. Instead of the run of the mill green, if shocked just the right way, growers can see a display of reds, yellows, purples, pink-toned highlights, and lavenders.

Blue Kush strain seeds grow with relative ease. Although this strain requires lots of sunshine and dry heat, Blue Kush is a good choice for newer cultivators. Temperatures for growth should stay between 68 degrees and 82 degrees Fahrenheit.

Blue Kush also grows high, so it needs a bit of room. Blue Kush undergoes an elaborate stage where its leafy, sturdy branches stretch. This phase is critical to the harvest. Those with limited space may want to think about accommodating Blue Kush’s growth.

Cultivators can employ a variety of methods, including SOG or a hydroponics system. Those seeking a boost in plant growth and production can try to adjust soil elements. Using humic acid during the early stages may aid in producing a healthy harvest.

Growers that desire the full depth of Blue Kush’s color possibilities should shock the plant with colder temperatures during its growing phase. Using this method will result in a wealth of intense purples, blues, and spots of crimson and orange.

Blue Kush is also a fast grower, taking only about 8-9 weeks to flourish. Its quick turn around along with a less demanding atmosphere, has made this strain a quick favorite amongst enthusiasts.

It also boasts an impressive yield. Growers can expect up to a pound per square meter indoors, while outdoor growers may look forward to more. In optimal conditions, it is not uncommon to find yields of 20 ounces or more outdoors.

The highest test of CBD for this strain yields 0%.

Fans of this strain have indicated its use in reducing many symptoms. Some of these symptoms include focus and concentration. Others have cited its help in reducing headaches, in particular migraines. Users have also consumed Blue Kush for assistance with other physical ailments, including back pain and muscle soreness.

Although this is not the ideal strain for sleep, it may increase relaxation and induce feelings of calm and tranquility. In turn, this may support a healthy sleep pattern by reducing anxiety and stress. Also, Blue Kush may elevate moods and arouse feelings of happiness and contentment. A lesser-known use includes appetite increase.

Possible Side Effects of the Blue Kush Strain

Some users may experience an adverse reaction. THC sensitivities or other individual factors may result in dry eyes, dry mouth, headache, paranoia, or dizziness.

The Blue Kush strain is popular amongst a broad set of users. It’s easy to see why. It is a hybrid that features some incredible sativa and indica qualities. It is energizing and buzzy. However, it doesn’t have a sharp hit that anyone would expect from a sativa-dominant strain. It shows its indica side with a crisp, relaxed let-down and a body high.

For anyone that is seeking a strain that doesn’t have an intense sedative effect, Blue Kush stands as an excellent option. Its body high is relaxing and pleasant, and users won’t feel tied to the couch. Instead, many find that they can undertake everyday tasks. It is also a strain that gets the creative juices pumping and the user’s focus laser-sharp.

It is easy to grow, and even newbies may find that a high yield isn’t out of reach. With lots of sunshine and a dry environment, growers can look forward to only 8-9 weeks before harvesting. Both indoor and outdoor growers can enjoy a moderate yield. Growers can also utilize several growing techniques for the best results.

Blue Kush has a variety of uses, including an increase of appetite, reduction of pain, and stress-relief. Its level of THC makes it a good pick for both strain connoisseurs and newbies alike.

All about this chilled-out strain

31
8 min read
Video
Join the discussion
TOC
Premium
Your subscription has ended
If you love cannabis and want to support our site, join WayofLeaf Premium today and unlock
Best of all, part of your membership fee will go towards supporting the fight to legalize cannabis.
Sign Up for WoL Premium
Not now
I already have an account
×
Log in to Your Premium Account