Written by Editorial Team
7 min read
57 comments
Blue Dream Strain Overview
Blue Dream is a sweet tasting and smelling strain that is reminiscent to fresh blueberries. It is a very potent medical strain and has many effects such as relief of pain and anxiety, and can help to bring about feelings of happiness and wellbeing. It is a super popular strain, and a staple strain amongst the medicinal community. 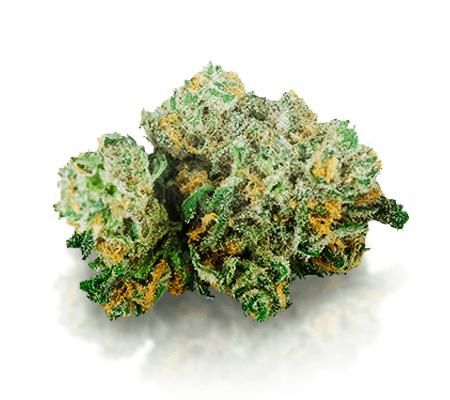 Having developed into one of the most legendary West Coast strains of the century, Blue Dream marijuana is more or less a common household name these days among both patients and cannabis-lovers alike.

Ideal for those just dipping their feet into the world of medical cannabis, and also for those who are considered “cannaisseurs,” the effects of Blue Dream are not only pleasant but also diverse and capable of appealing to a wide variety of recreational users, potheads, and patients alike.

Named after the fruity and sweet aroma that is mind-blowingly reminiscent of biting into a batch of freshly-picked blueberries, Blue Dream is as potent as it is pleasant with its far-reaching effects ranging from euphoric and relaxed to energized and motivated.

The overall versatility and wide-range of ailments and symptoms that Blue Dream is tailored to has caused this medical and recreational marijuana strain to be take the world of weed by storm.

So much so that these days you can find amazing quality Blue Dream on the top-shelf of almost any reputable dispensary or pot shop in the United States. Often nicknamed the “medicine cabinet essential”, Blue Dream is seen as a staple in the world of contemporary weed. In fact, all types of marijuana consumers should have a snap of this ganja easily accessible at home.

What Is Blue Dream?

With a 60% sativa and 40% indica genetic makeup, the Blue Dream strain is, of course, classified as a hybrid. Although Blue Dream expresses a higher percentage of sativa phenotypes, on occasion it is possible to obtain a phenotype that is more characteristic of an indica strain.
Overall this situation is fairly uncommon, though, and more often than not you will be receiving an uplifting and energizing sativa dominant batch of herb when purchasing Blue Dream cannabis. In fact, Blue Dream’s existence arises from the cross-breeding of two delicious and fragrant strains: Blueberry and Haze (the former being classified as an indica and the latter a sativa).

Most agree that the origins of Blue Dream marijuana trace back to California, where the bud’s blueberry sweetness seems all too reminiscent and befitting of the sunny and golden state. It will leave you California Dreaming and wanting plenty more after those first couple of tokes.

DID YOU KNOW: The THC content of Blue Dream routinely tests in upwards of 25%?

Recent tests that have been conducted on various specimens of Blue Dream have shown a pretty erratic THC content, with levels testing in anywhere from 17-25%. While these numbers are pretty “up there,” most would probably agree that Blue Dream doesn’t quite pack as powerful a punch as strains like Gorilla Glue #4, which is just a downright monster.

Still, the bud does not disappoint as it presents plenty of medicinal THC to share with the cannabis community. Its CBD levels are low – around the 0.1-0.2% mark – so the majority of medical benefits will be achieved through the bountiful THC levels.

Blue Dream marijuana is mostly recognized for its unique and unexpected flavor and aroma. When you first get a whiff of this strain, expect to be overwhelmed by a scrumptious and delectable fruity flavor, as well as childhood nostalgia for any of us that grew up picking berries in the summertime.

The Blue Dream strain doesn’t just stop there, though, hinting at flavors of sharp, earthy sandalwood, crisp citrus, and even grape and floral notes. It expresses a harmonious balance of qualities from both its parents – Blueberry and Haze. 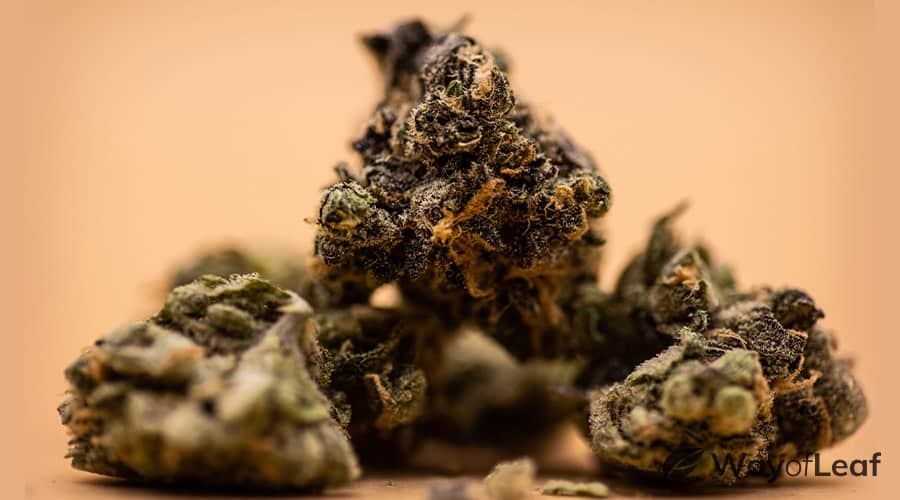 The aroma of Blue Dream is often hard-hitting and pungent, so don’t expect this to be a strain that simply smells like “regular old cannabis in a jar.” Although Blue Dream does leave traces of smell wherever you go, this is actually a good thing because it means you’ll be getting the most out of your high.

Appearance-wise, Blue Dream weed is characterized by looks that, ironically enough, remind one nothing of fresh blueberries (no shades of blue or purple involved, whatsoever). Instead, expect rich-green, sometimes sagey-colored buds, with yellow and orange pistils and frosty, totally-coated-in-THC trichomes. The water leaves of Blue Dream range from orange to brown to dark green in color, depending on the specific subspecies of Blue Dream you are cultivating, as well as the conditions in which your crop is grown.

Although the Blue Dream cannabis strain will technically grow and produce cannabis in a variety of conditions and climates, it is vital to provide your nuggets with the right nutrients and care if you actually expect to cultivate a quality crop.

Giving your Blue Dream weed plenty of magnesium, nitrogen and other fertilizers – in addition to heavy quantities of fresh water – will ensure that your nugs turn out healthy and content, making you (or anyone that smokes your crop) happy and joyful in return. Blue Dream has been described as one of the heaviest drinking strains of marijuana, however, so expect to be providing your plants with multiple gallons of water every single day.

Blue Dream’s flowering period is around 8-9 weeks, which is considered average length compared to other strains of marijuana.

Even though you will have to deal with a relatively slow flowering time, as mentioned above, what makes Blue Dream weed so special is its impeccably large yield and its high-potency buds. Skilled, experienced growers can expect anywhere from 500-600 grams of fresh reefer per plant when their plants are grown outdoors (expect to harvest your cannabis in mid-September to mid-October if you are cultivating outdoors). 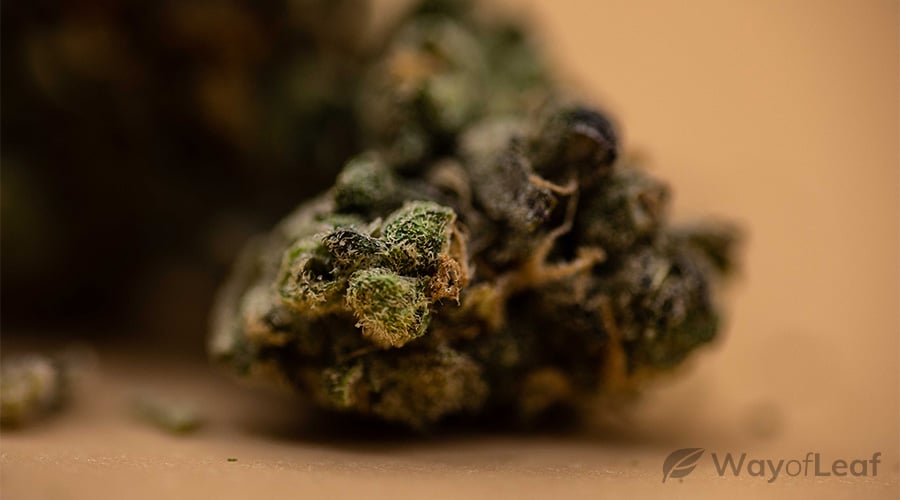 If you are growing indoors, expect roughly the same amount per meter squared (m2). At first, it may seem as if your Blue Dream weed is taking a long time to get going, but once the crop hits the flowering stage you’ll witness the branches stretch and reach towards the heavens, with their overall size practically skyrocketing over-night.

By carefully selecting a superior soil, you can achieve densely-packed flavor, often tastier than if you were to choose a soil of lesser quality. However, if you are deciding to cultivate indoors, using hydroponics as your method of growing will probably yield the best results, at least in terms of achieving the highest-potency nuggets.

Like almost any cannabis strain, Blue Dream weed is susceptible to spider mites and powdery mildew, so be sure to check your crop regularly to make sure your reefer is staying as healthy as possible. If there is evidence of any virus or health deterioration, make sure to remove the unhealthy plants from the crop as quickly as possible.

Blue Dream marijuana strain is said to have a variety of effects, making it a versatile and easily-lovable option for almost any type of smoker. The strain is typically sold as a top-shelf weed because its clean genetics and effects that work for just about anyone make it a wonderful selection for a number of reasons.

Blue Dream weed often leaves its consumers with an uplifted, relaxed feeling, paired often with a euphoria that is not only creative, but also energizing.

Although the Blue Dream marijuana strain is a hybrid, it makes an extraordinary day-time cannabis strain, great for a before work smoke to center and prepare you for your long day ahead. Take a snap of this ganja mid-day to re-energize and re-uplift you – in fact, a lot of people say it works even better than a mid-day cup of coffee!

Blue Dream probably isn’t a good option if you are trying to fall asleep late at night, but if you’re planning on going out for the evening to chill out with friends or to party, then this should be your go-to reefer; a truly fantastic option for socializing, partying, or simply hanging out with a few of your best buds.

Because of its wide variety of effects, Blue Dream weed is suitable for assisting with a number of medical ailments, conditions, and symptoms. Overall, Blue Dream is considered most suitable for helping those who are suffering from mental disorders like stress and depression, as well as physical impairments like chronic pain, headaches and strong levels of fatigue. 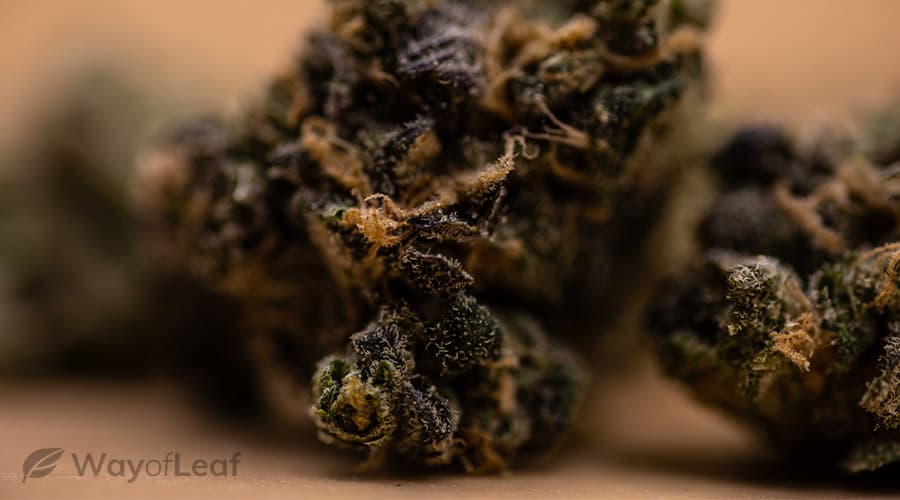 Blue Dream is considered an especially uplifting marijuana strain, so for those who are finding themselves exhausted, worried or upset, it may be a wonderful solution.

If you are handling mental illness and looking towards Blue Dream marijuana for help, it is likely that smoking an average amount of this cannabis strain would be in your favor. Over-consuming Blue Dream weed could lead to paranoia and further stress (as it can with any strain of marijuana), so knowing your limitations and finding a balance in your amount of consumption is ideal if you want to achieve the most effective results.

For those dealing with more serious medical conditions such as seizures or neurological disorders, Blue Dream would probably not be the most ideal option due to its low CBD and CBN content. However, be sure to speak with your local budtender about their specific Blue Dream cannabinoid profile, as this can differ from phenotype to phenotype.

Possible Side Effects of Blue Dream

Unsurprisingly, the most common side effects that have been reported from Blue Dream marijuana include dry mouth and dry eyes. If you are experiencing these effects, be sure to stay hydrated and drink plenty of fluids (duh).

And of course, use eyedrops religiously to re-moisturize your eyes if necessary. Occasionally, some individuals have experienced anxiety or paranoia after consuming Blue Dream weed, but this can usually be avoided by knowing your limits and not overindulging in any kind of marijuana – regardless of the strain or type. Listen to your body, and the whole experience should be a relatively smooth one.

Well, we hope you have found this Blue Dream review to be not only enjoyable but also educational and informative. Genuinely speaking, this is one hell of a cannabis strain that we’re confident you’ll love from the moment you take your first toke.

Some folks (particularly those “spoiled” stoners out on the West Coast) have been seeming to get a little tired of it as of late (kind of like your favorite song being played over and over and over again on the radio), but hey – might as well not shut down a good thing if you’ve got a good thing going, right?

And lastly, as a final parting word it is important to remember that the consumption of Blue Dream marijuana – or any kind of marijuana for that matter – is the sole responsibility of the user, and discretion should always be taken.