Written by Editorial Team
5 min read
0 comments
Read Later
All information on this website is for general informational purposes only and is not intended or implied to be a substitute for professional medical advice, diagnosis or treatment.
Blue Diamond Strain Overview
Blue Diamond is a gem of a strain. Its euphoric and relaxing effects make it suitable for both recreational and medicinal use. It is popular as a remedy for stress, depression, aches, and pains, and tastes fantastic too! 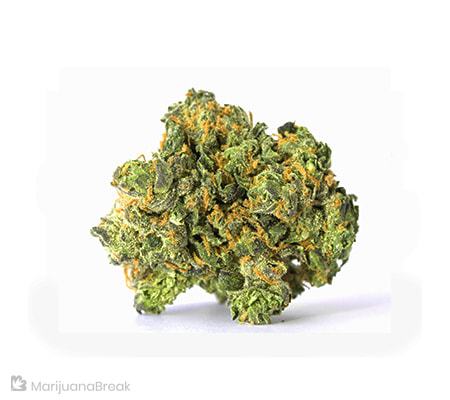 The Blue Diamond strain is a real gem. This well-balanced hybrid with an even sativa/indica split provides blissful relaxation for both body and mind.

For this reason, Blue Diamond is popular among recreational and medicinal users alike. Marijuana growers will also love this strain for its fast flowering time and dense, sticky buds.

So, what do you need to know about the Blue Diamond cannabis strain? Read on to find out.

What Is the Blue Diamond Strain?

BioQueen is the breeder responsible for creating Blue Diamond weed. Although they have not disclosed this strain’s precise lineage, most people believe it is a cross between Diamond OG and Blue Dream. This theory makes sense, not only due to the strain’s name but also because of its characteristics.

Blue Diamond is a hybrid strain with a 50/50 indica-sativa split. There is some dispute online as to whether its sativa or indica effects are dominant. However, in reality, different phenotypes likely allow either side of Blue Diamond’s effects to come to the fore.

What most people can agree on is that Blue Diamond is primarily a relaxing strain.

What most people can agree on, though, is that Blue Diamond is primarily a relaxing strain. Early on in the high, its sativa effects are dominant and bring about a state of euphoria and creativity.

Thoughts flow freely, and some people even experience mild psychedelic effects. Everyday sights and sounds become distorted, and time seems to pass slower than usual. These trippy sensations may take novices by surprise. However, if you’re an experienced cannabis user, you’ll likely find them enjoyable.

As the high progresses, Blue Diamond’s indica effects begin to take hold. Physical tension melts away as your body and limbs become heavy and relaxed.

Take note, however, consuming a large amount of this strain can lead to couchlock. You can prepare for this by having plenty of water and some healthy snacks on hand.

These sedative effects are probably due to the cannabinol (CBN) content of the strain, as it contains around 0.6%. The generous levels of this cannabinoid make Blue Diamond most suitable for evening or night-time use.

Users describe Blue Diamond’s smell as earthy and hashy, with hints of sweetness and pine. This aromatic fragrance is likely thanks to its OG genetics and the famous terpene profile of these popular strains.

Although its OG heritage is evident in Blue Diamond’s aroma, its flavor nods to its other parent, Blue Dream. The hashy, earthiness of its scent carries through, but there is an accompanying sweetness, much akin to fresh blueberries.

On the exhale, more grassy notes come through, giving Blue Diamond an extra depth of flavor. Its smoke is smooth and unlikely to cause coughing.

Blue Diamond nugs are small to medium in size, with an almost triangular shape and densely packed buds.

The buds have a soft green color, but some plants also take on purple and blue hues as they grow. The buds are interspersed with red and orange pistils and covered in a thick layer of sticky trichomes.

Blue Diamond plants themselves are short and bushy, ideally suited to indoor cultivation. So, what do you need to know if you want to grow your own Blue Diamond?

Blue Diamond seeds are available online from BioQueen, but their supply of this strain is not exactly reliable. When we checked their website, the seeds of this particular strain were out of stock. Therefore, anyone wanting to grow Blue Diamond may need to source cuttings from a healthy, mature plant. 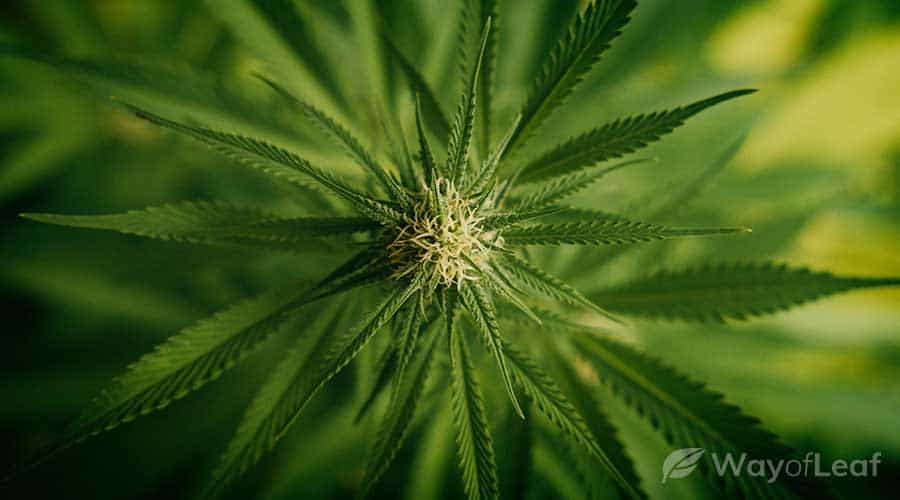 A Blue Diamond seedling or clone is most likely to thrive indoors where you can carefully control its growing environment. However, you could attempt to grow it outdoors if you live in a semi-humid or Mediterranean climate.

Indoor Blue Diamond plants boast yields of 10–14oz per square meter, with a flowering time of just eight weeks. Outdoor plants could produce 14oz per plant and should be ready by September.

To bring out the plant’s purple and blue coloring, expose it to colder night-time temperatures just before the flowering stage. Doing this causes the green chlorophyll pigment to break down and allows the colorful anthocyanins to become dominant.

However, if you decide to use this method, it is wise to be cautious. Be sure to reduce the temperature gradually over several days to avoid shocking and killing your plants. Novice growers may be best leaving this advanced technique to more experienced marijuana cultivators.

Finally, to optimize Blue Diamond’s fantastic flavor, it is necessary to dry and cure the buds properly before smoking. It is a strain where a little patience definitely pays off in the long run.

The average Blue Diamond THC content is a manageable 18–19%. However, some cuts could contain as much as 24%, making for some pretty potent effects. Inexperienced users should exercise caution when using Blue Diamond for the first time.

Blue Diamond’s CBD content is negligible, usually falling between 0.5% and 1%. These low CBD levels are standard in most hybrid strains and don’t necessarily mean they lack medicinal benefits.

Thanks to its mood-enhancing effects, the most common medical use of Blue Diamond is mood disorders such as depression. Users have also reported using it to alleviate stress and anxiety, although consuming too much can have the opposite effect.

Once its indica side kicks in, Blue Diamond could act as a muscle relaxant and help to relieve physical aches and pains. After a while, users report feeling spacey and sleepy, making insomnia another possible condition that this strain could benefit.

Another reason why people may choose to use Blue Diamond medicinally is to relieve the side effects of chemotherapy. It could reduce nausea and improve appetite, making this challenging treatment a little bit more manageable.

Possible Side Effects of the Blue Diamond Strain

As with most strains, the most prominent side effect of Blue Diamond is a dry mouth, also known as cottonmouth. Dry eyes can also be a problem, and the best way to avoid these issues is to stay well-hydrated. Since Blue Diamond can cause couchlock, ensure you have plenty of water or another hydrating beverage ready before you start.

The most prominent side effect of Blue Diamond is a dry mouth, also known as cottonmouth.

Less common side effects include dizziness, headaches, increased anxiety, and paranoia. The latter is more likely to affect people with a predisposition to these feelings or have a low THC tolerance. That said, reports suggest that Blue Diamond is less likely to induce feelings of panic than other, more potent strains.

When using any new strain for the first time, it is wise to try a little to see how you tolerate its effects.

Blue Diamond is a well-balanced hybrid with a pleasant blend of sativa and indica effects. Either one may be more noticeable depending on the cut, as well as when and where you use it.

However, it is primarily a relaxing strain and is popular with both recreational and medicinal users. Some popular reasons users report for consuming Blue Diamond include depression, stress, pain, and insomnia.