Written by Tiannah Pedler, M.A.
4 min read
20 comments
Video
Read Later
All information on this website is for general informational purposes only and is not intended or implied to be a substitute for professional medical advice, diagnosis or treatment.
Blue Cheese Strain Overview
Although it may sound slightly off-putting, the Blue Cheese strain is actually a delectable and sweet strain with an interestingly cheesy aftertaste. This strain is great for those who need a moment of respite, as it can help instill a sense of deep relaxation, euphoria, and even mild sedation as time passes. 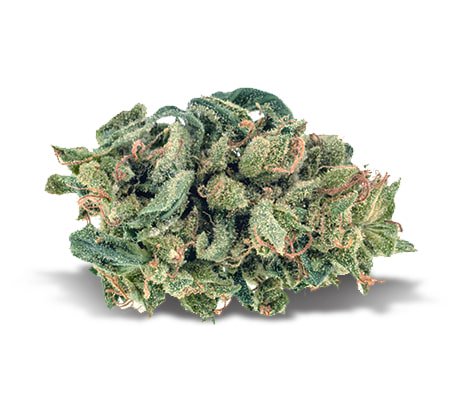 By now, it’s pretty well known within the cannabis community that the Cheese family of weed strains is oddly reminiscent of actual cheese. So, you would be forgiven for thinking that Blue Cheese is yet another run-of-the-mill cheese-tasting strain. However, you would be wrong.

Instead, Blue Cheese weed has a fruity and sweet twist on the traditional cheesiness of this genetic lineage.

Cheese strains have taken over many pot shops and medical marijuana dispensaries on both coasts, popping up in locales as widespread as California, Maine, and Colorado.

What Is the Blue Cheese Strain?

Blue Cheese marijuana is classified as an indica-dominant hybrid, with a roughly 80% indica and 20% sativa genetic profile.

The Blue Cheese strain is a cross between parent plants UK Cheese (hybrid) and Blueberry (indica). The result is a hearty strain packed full of THC and that traditional cheesy aroma.

The high from Blue Cheese weed won’t hit you like a ton of bricks. Instead, it almost washes over the body, bringing relief with an immense variety of potential therapeutic benefits. The decrease in stress levels will seem natural as the relaxation creeps up upon you slowly.

Euphoria and pure bliss are characteristic of the Blue Cheese high, making it an ideal nighttime strain.

Euphoria and pure bliss are characteristic of the Blue Cheese high, making it an ideal nighttime strain for those looking to unwind after a long, demanding day.

You’ll likely experience sedative-like, sleepy feelings that will encourage you to lay your head down for a peaceful night’s rest by the end of the high.

The most defining characteristic of Blue Cheese cannabis is its intriguing aroma, which is oddly reminiscent of, you guessed it… actual cheese.

Unlike the aroma, the flavor of Blue Cheese is on the sweeter side, with most of the sourness pulling an escape act during the combustion process. Inhalation is typically sweet and delicious, with exhalation becoming musky, earthy, and sometimes spicy (but always pungent).

However, Blue Cheese brings about another palatable twist as it features notes of blueberry fruitiness that seem to become especially apparent when inhaled.

It also combines notes of blueberry and earth to help cool off the cheesiness if it’s too much for you. The aftertaste produces a slight sourness much like that of Parmesan or Gouda.

A fried sandwich that’ll get…

Appearance-wise, the Blue Cheese strain has a subtle blueish-purple undertone, with the sugar leaves exposing angelic-like hues of pastel violets.

Overall, the buds are pretty resin-coated, producing a glistening and sugary appearance that can make any stoner’s mouth water with anticipation.

The flowers of Blue Cheese weed are typically various shades of yellow/green and contain streaks of sandy orange pistils (fine hairs) that are ultra curly and tightly wound.

The water leaves are usually a wide range of colors, presenting themselves as any shade from deep green to deep purple, causing the variety of hues to be especially prominent. All in all, this is a strain that’s as visually appealing as it is palatable.

All of the beginner cannabis growers out there can take a massive sigh of relief because Blue Cheese weed is thankfully a pretty simple strain to cultivate.

This strain is naturally resistant to mold, which is a plus because Blue Cheese thrives the most outdoors in cold climates due to its original UK roots. 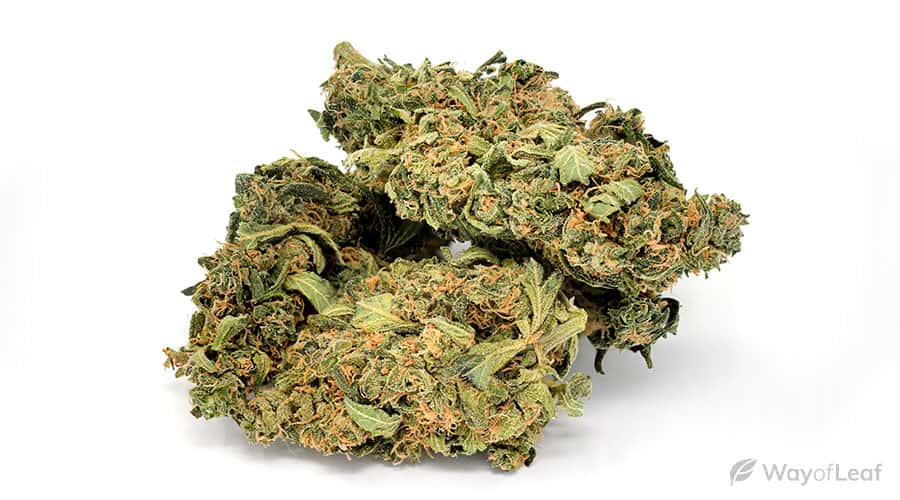 Unlike some indicas, Blue Cheese weed is pretty average in height, with stems that usually spread out and stretch far and wide.

The Blue Cheese strain has a relatively short flowering period, at only 8-9 weeks, with outdoor harvest falling around October.

Those looking for a more in-depth grow guide for the Blue Cheese strain can find it here.

Tips and tricks from the team…

The Blue Cheese strain’s THC level can reach as high as 20%. On average, though, Blue Cheese typically contains approximately 17.5% THC.

Reports of Blue Cheese’s CBD content vary. Some say it does not contain any CBD, while others suggest its CBD level can be as high as 2%.

Blue Cheese’s soporific effects come on gradually as time passes, making it a good option for anyone struggling to unwind and sleep. 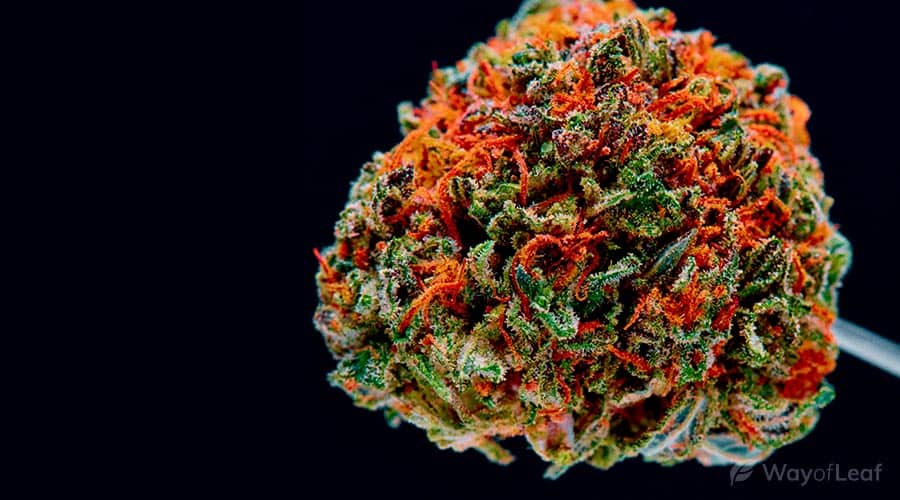 Due to its uplifting and relaxing effects, the Blue Cheese strain may offer temporary relief to people with mood disorders such as depression and anxiety.

Possible Side Effects of the Blue Cheese Strain

Novices should note that the Blue Cheese strain has a relatively high THC level that can reach 20%. Overconsumption may lead to THC-induced paranoia, anxiety, and dizziness.

Some of Blue Cheese’s more common side effects include cottonmouth and dry eyes; however, these side effects are manageable with a little extra preparation. Drink plenty of hydrating fluids before, during, and after your high, and also keep moisturizing eye drops close to hand.

This pleasant indica-dominant strain has left a real mark on the cannabis community, traveling almost halfway across the globe to California, where it has become a favorite of both patients and ‘cannasseurs’ alike.

While the Blue Cheese strain has a typical cheese-like flavor and aroma, its Blueberry lineage is noticeable in its sweet, fruity flavor. Seasoned cannabis consumers will likely enjoy this strain’s effects; however, newbies should take note of Blue Cheese’s relatively high THC level, which can reach 20%.

Is it as powerful as it sounds…

Check out this juicy strain

6
7 min read
Join The Discussion
TOC
Premium
Your subscription has ended
If you love cannabis and want to support our site, join WayofLeaf Premium today and unlock
Best of all, part of your membership fee will go towards supporting the fight to legalize cannabis.
Sign Up for WoL Premium
Not now
I already have an account
×
Log in to Your Premium Account