Written by Editorial Team
4 min read
1 comments
Read Later
All information on this website is for general informational purposes only and is not intended or implied to be a substitute for professional medical advice, diagnosis or treatment.
Black Widow Strain Overview
Although it has the same name as a poisonous and deadly spider, the Black Widow strain, fortunately, is non-toxic. In fact, it’s the complete opposite of its arachnid namesake. It helps in mitigating chronic pains and offering relief from insomnia and mood disorders. It also has an interesting fruity and skunky flavor profile, with delicate undertones of nuttiness on exhale. It is great for an afternoon smoke, though it can cause sedation. 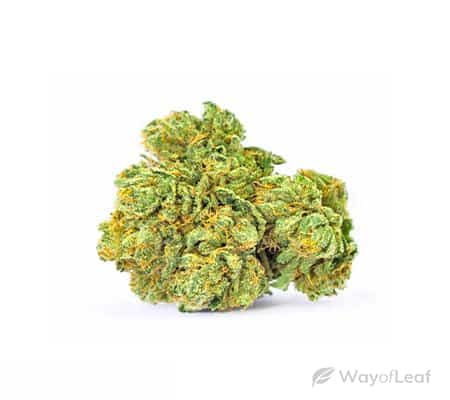 The Black Widow strain probably gets its name from the small spider with the deadly venom. If you ever see one of these creatures, make a run for the nearest exit because its venom contains the neurotoxin latrotoxin, which causes a serious illness called latrodectism. Fortunately, the cannabis strain doesn’t cause this illness! Instead, its potent high can cause a sense of euphoria, relaxation, and even a mood boost.

What Is the Black Widow Strain?

Black Widow is a sativa-dominant strain and has a very interesting history. A breeder called Shantibaba, better known as Scott Blackey, created it.

In 1994, Blackey teamed up with Arjan Roskam to create a brand-new line of marijuana seeds. The following year, the duo unveiled White Widow at the Cannabis Cup and won first place. Blackey claims that he was the person who created White Widow. When he left Greenhouse Seeds in 1998, he took the genetics with him but could not take the name.

Therefore, when he helped found Mr. Nice Seeds, along with Howard Marks, he released Black Widow, which is believed to be White Widow under a different name. We can say that the strain is a cross of a Brazilian sativa and a South Indian indica.

Roskam disputes Blackey’s version of events, however. He claims that White Widow was created by a Dutch breeder called Ingmar, who gave the genetics to Greenhouse Seeds. Ingmar’s version of White Widow is available these days under the name ‘De Sjamaan Seeds.’

Depending on the phenotype, it is wise to expect Black Widow to provide an extremely potent high.

Although it depends on the phenotype, it is wise to expect Black Widow to provide an extremely potent high. Almost immediately, you will feel a buzzing cerebral high that elevates your mood and generally leads to euphoria.

Users say there is a fine line between using just enough to enjoy an incredible high and overdoing it, which leads to couch lock. Black Widow often provides users with a reasonable level of body relaxation, although you may not notice it due to the intense head high.

If you tolerate this strain well, you will feel happy, focused, and potentially creative. Otherwise, you will lounge on the couch and stay put for hours. Ideally, you will use Black Widow in the evening.

Black Widow offers a skunky and sweet odor with a pine overlay. It is a fragrant-smelling flower, and you will enjoy inhaling the scent.

Black Widow tastes similarly to how it smells. There is a fruity yet skunky taste, along with a nutty aftertaste that treats the senses.

Perhaps Black Widow is named after a deadly spider because the purple in its buds looks so dark that it appears black. The strain also has orange hairs, plenty of green in its buds, and is covered in trichomes when ready for harvest.

Black Widow is a great strain for novices because it is one of the easiest marijuana strains to grow. It is highly resistant to mildew, molds, and pests, and it thrives in a hydroponics setup or soil. You may also enjoy an increased yield if you opt for the Screen of Green (SCROG) method. 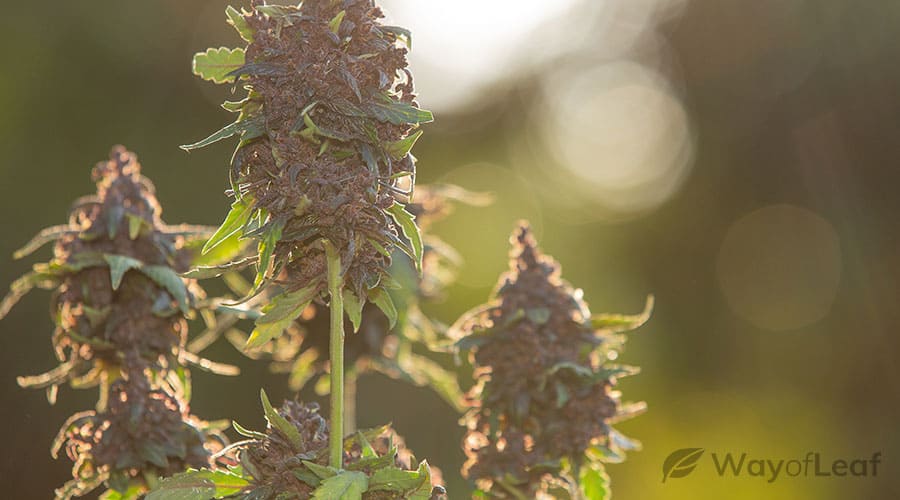 If you decide to grow Black Widow outdoors, bear in mind that it can grow to over six feet tall. It enjoys a warm climate with lots of sunshine and should be ready for harvest by the end of September or early October in the Northern hemisphere. It will yield up to 14 ounces per plant.

Black Widow is ideal for indoor cultivation because it seldom grows taller than three feet. Ensure it is exposed to lots of light during the vegetative stage and consider using the Sea of Green (SOG) method. On average, you can expect anywhere from 11 to 16 ounces per square meter planted, and its flowering time is 8-9 weeks.

The THC content of Black Widow can vary significantly. You may find a version with just 15% THC, but we have heard that its THC content can reach 28%! On average, its THC level is approximately 21%.

While the black widow spider delivers a potentially deadly substance, the marijuana strain has possible beneficial medical effects. It is sometimes used to increase focus and enable the user to function at a higher level. The intense cerebral high makes it an ideal option for anyone in need of a mood boost. This includes patients with depression, stress, or an anxiety disorder.

Although it is sativa-dominant, Black Widow retains enough of its indica traits to act as a potentially effective analgesic. As it also has sedative qualities, you could use it to help with insomnia. Black Widow contains various terpenes that help create the aroma and may also have positive effects on certain medical ailments. The terpenes included in abundance are pinene, beta-caryophyllene, and humulene.

Possible Side Effects of the Black Widow Strain

As is always the case with extremely potent marijuana strains, Black Widow could cause your level of anxiety or paranoia to increase. If you are a first-time user, there is every chance that the potency of the high might cause you to panic.

Other common reactions include dizziness, dry eyes, and a dry mouth.

Black Widow is an aromatic strain with a complex cannabinoid and terpenoid profile. It is extremely easy to grow, with high resistance to pests and diseases, and it is relatively easy to maintain. However, we recommend doing so indoors because the plants remain short and easy to manage.

New users might find Black Widow far too potent. Even experienced users are in danger of being overwhelmed.

When you grow Black Widow, your eyes will widen in anticipation during the blooming phase. The purple and green buds become covered in enormous amounts of trichomes which shine like crystals. Please resist the urge to harvest the crop before it is ready!

We don’t recommend Black Widow for new users because it is far too potent. Even experienced users are in danger of being overwhelmed if they overestimate their tolerance.