Written by Editorial Team
6 min read
65 comments
Read Later
All information on this website is for general informational purposes only and is not intended or implied to be a substitute for professional medical advice, diagnosis or treatment.
The Black Strain Overview
The Black Cannabis strain is so named due to its dark appearance. While it may look ominous, it's a strain that's worth a try. Users describe it as a smooth smoking experience. With flavors that run the gamut from spicy to sweet berry, this strain has something for everyone. 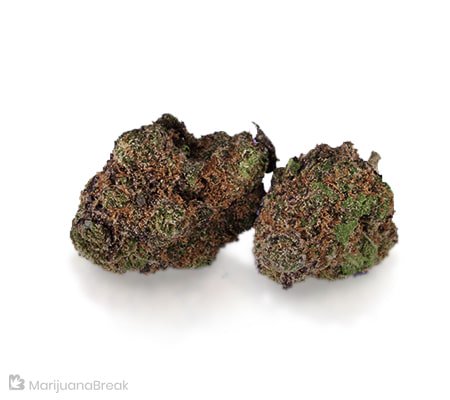 Named after its distinctive color and dark appearance, The Black marijuana strain entered the cannabis scene during the 1980s. However, it wasn’t until 2008 that the crop finally gained recognition from High Times, becoming listed as one of the Top 10 Cannabis Strains of the year.

The Black initially captivated consumers with its exotic looks, but once the marijuana strain was actually smoked, it became clear that looks weren’t the only thing the flower had going for it.

With many cannabis strains, the origins are sometimes known but the original grower is not. The opposite is true with The Black strain. Bred by Canada’s BC Bud Depot, the growers apparently did not want the world to know where this exquisite marijuana strain had come from. Thus, they didn’t disclose the exact parents that were used to execute the crossbreed.

For this reason, the genetic lineage of The Black marijuana strain is largely unknown — and it will likely stay this way. With origins from Canada’s Vancouver Island however, the phenotype has now spanned across two countries in Northern America, and will likely continue to spread globally.

What Is the Black Marijuana Strain?

Although its name may seem a bit dramatic, The Black is actually a serious cannabis strain, offering immense medical relief for certain conditions. Classified as an indica-heavy cannabis strain, the flower offers an intense body high, while its mental effects are a bit more moderate.

Lab results have concluded that The Black sits at a ratio of 90% indica, 10% sativa, so while its sedative and pain-numbing abilities are plenty, it does include an element of sativa to balance the effects a little.

Probably one of the most stunning features of this marijuana strain is when the crop begins to near harvest time. Starting out with deep purple leaves which are already gorgeous from the get-go, once it is time for flowering the violet sugar leaves morph into a dark black, which can seem unreal in person.

Just a little of The Black strain can go a long way, as its THC content ranks in at roughly 20% on average. This makes it one of the top-tier cannabis strains in terms of strength and potency.

With an overpowering aroma, The Black marijuana strain reeks and emits a scent that starts out fruity and grape-like, with added hints of earth and spice. This makes for one intriguing combination. Later, once the flowers have been ground up they take on a slightly different smell, radiating more of a spicy scent.

The flavor expands upon the scent profile a bit more, hitting the tongue with sensations of pepper and spice. Of course, notes of berries and grape are also blended in, morphing together for an overall sweet and sugary taste. 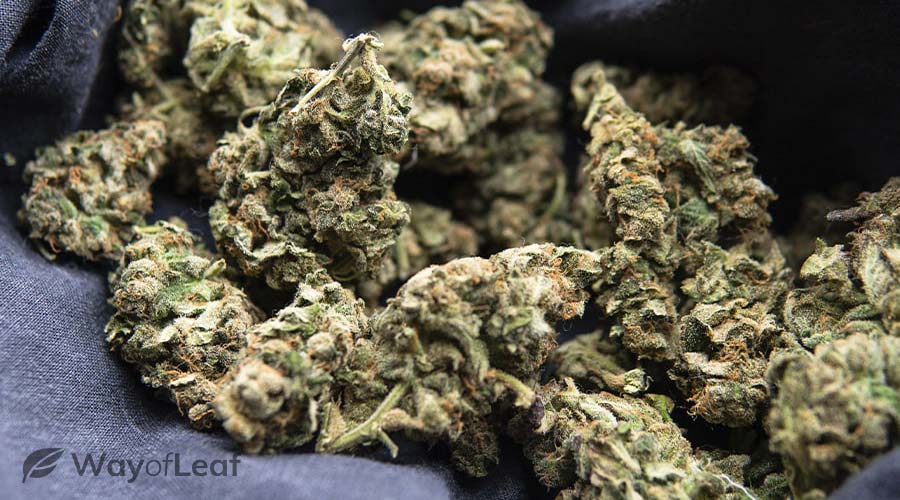 Some ‘cannaisseurs’ regularly consume The Black for its effects, but many say the strain’s aroma and flavor are actually why they keep coming back for more.

Once lit, The Black hits the lungs gently and offers a smooth, velvety texture that does not generate coughing.

Appearance-wise, The Black is simply stunning. The sugar leaves are a dark purple in color, deepening over time into jet black with undertones of gray, making for a spooky and alien-like aesthetic.

In between the oddly colored sugar leaves are brassy orange pistils, tiny hairs that curl and twist, offering a juxtaposition against the cooler shades of the rest of the bud.

What certainly adds to the beauty of The Black is that its deep purple leaves are coated by a thick frosting of trichome crystals, which glisten and sparkle when placed underneath light. This bud quite literally looks like something straight out of a sci-fi movie.

Little information has been released by BC Bud Depot regarding how to cultivate this strain yourself. Some information is, nevertheless, universal in its appeal and can be applied for those who are wondering how to grow The Black for good, healthy yields.

We do know that the strain is suitable for cultivation in both outdoors and indoors environments, but as with all cannabis strains, it requires tender care for a successful outdoor harvest. Certain climate conditions must be fulfilled, and it’s understood that The Black thrives in a sunny, low-humidity environments.

The Black is an indica strain, so it has the same typical growing stature of other genotypes in this category (mainly a short and bushy figure that does not take up much upwards space, but rather expands outwards). For this reason, The Black is a convenient marijuana strain for indoor cultivation.

Regardless of the location, indoor environments must mimic the warm and sunny conditions needed for proper growth, which means plenty of light should be present, as well as a working ventilation system and a way to monitor and manipulate temperature and humidity.

The typical flowering period for The Black is estimated at 7-8 weeks, and can be predicted when the buds transform from dark purple to a deep black shade. Yields are rather generous, especially for an indica, with successful indoor plants producing up to 10 ounces per meter squared on average (outdoor yields may produce up to 12 ounces per plant).

All in all, The Black would probably be a pleasant cannabis strain to cultivate, as long as you desire a strong indica and have some past experience with growing weed.

The Black is heavily indica dominant in just about every sense of the term. Its effects primarily impact the body and produce an immense body high. The strain often produces sedative effects, so much so that higher doses could make you fall asleep rather quickly.

Even for those who have built up a tolerance to cannabis, The Black may cause couch-lock, munchies, and complete body relaxation. It drops its user into a state of tranquility and peace, where the body is almost buzzing with serenity as it sinks deeper and deeper into bliss.

The Black strain is an essential option for those who would like to have a lazy and euphoric time, with no plans for the day.

In most instances The Black should not be consumed during the day, unless you have no plans except to chill out, eat lots of food, and fall in and out of a sleepy state. However, during the evening the strain can be a real treat as it offers plenty of enjoyable moments and a body high unlike many others. 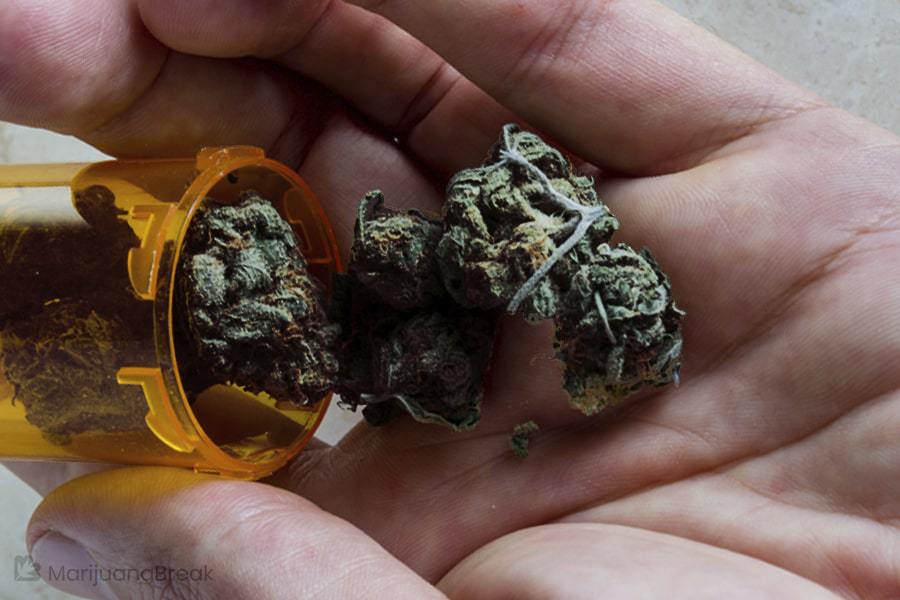 As its effects are wide-spanning, The Black is probably most suited for those searching for pain management, stress relief, and sleep issues (insomnia). For stress, in particular, it is important to begin with smaller doses because some individuals can react negatively to higher amounts of THC from any cannabis strain, further increasing anxiety levels.

To avoid this, start slow and build from there once it is understood how the potent levels of THC are affecting your mind and body. For insomnia, pain, migraines/headaches, nausea, and lack of appetite, a higher dose of The Black is likely in order so that the full extent of the effects may be experienced.

And if smoking does not sound appealing, alternative methods of consumption not only keep toxins out of the lungs, but they may even offer higher doses by default. Alternatives to smoking include edibles, tinctures, and wax concentrates (dabs).

Possible Side Effects of The Black

As is typical with most indica marijuana strains, The Black does produce pretty intense dry mouth (cottonmouth) and dry eyes. These adverse effects, however, are minimal and easily manageable with just a little extra preparation and planning.

Consuming plenty of hydrating fluids before, during, and after your high can keep unwanted dry mouth at bay, and also prevent the body from becoming dehydrated, which means fewer headaches or grogginess the next day.

Side effects such as dizziness, nausea, and paranoia can occur in more rare circumstances, but this should not be a cause for concern unless you know that you are prone to THC-induced anxiety.

Even for those who have been around cannabis their entire lives, witnessing a quality specimen of The Black marijuana strain is something to behold. The deep, dark hues are unreplicated anywhere else in the cannabis kingdom, and being in the strain’s presence is truly special.

In terms of effects and potential health benefits, The Black can be expected to produce results similar to any quality indica strain. While it may not be too easy to find – especially outside of West Coast dispensaries – any chance you get to indulge in this unique phenotype should be taken.

As good as dessert?

14
5 min read
Video
Join The Discussion
More comments
TOC
Premium
Your subscription has ended
If you love cannabis and want to support our site, join WayofLeaf Premium today and unlock
Best of all, part of your membership fee will go towards supporting the fight to legalize cannabis.
Sign Up for WoL Premium
Not now
I already have an account
×
Log in to Your Premium Account