Written by John Killerlane, B.A., HDip
3 min read
4 comments
Read Later
All information on this website is for general informational purposes only and is not intended or implied to be a substitute for professional medical advice, diagnosis or treatment.
Berry White Strain Overview
Berry White is a cross between the Blueberry and White Widow strains. It tastes like blueberries and pine trees and is a bit sour on the exhale. This strain offers a happy and uplifting high with gentle, relaxing effects. 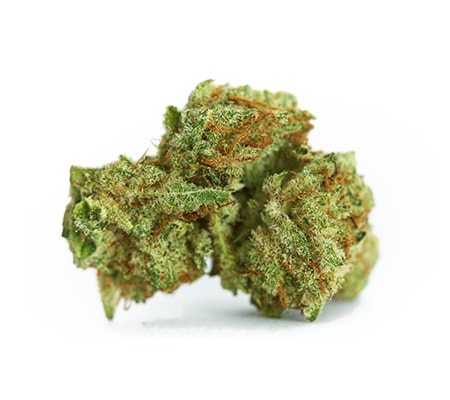 This comically named hybrid strain owes its name as much to its lineage as it does to the legendary soul singer Barry White.

Funnily enough, the Berry White strain came about accidentally. Cannabis breeders at Green Beanz Seedz in Colorado only intended this strain to be a stepping stone in a much larger cannabis breeding project. However, the breeders were so impressed by the hybrid that it became a strain in its own right.

What Is the Berry White Strain?

Berry White is an indica-dominant hybrid that’s a cross of the indica Blueberry and the hybrid White Widow. Hence the name Berry White. It is quite a potent strain, with an average THC level of 19%. However, it contains only a small amount of CBD, typically 0.1%.

The Berry White strain’s effects are what you would expect from an indica-dominant hybrid. Berry White consumers laud its indica effects, which deeply relax both body and mind. It is a popular choice among recreational consumers looking to relax and unwind after a busy day.

As Berry White is a hybrid, users also receive the welcome positive, uplifting, mood-enhancing effects of its sativa genetics.

Berry White’s fragrance is a rich mixture of blueberries combined with earthy aromas and sweet and sour notes.

Berry White’s flavor is a robust blend of sweet blueberries, with spicy notes and strong hints of pine. 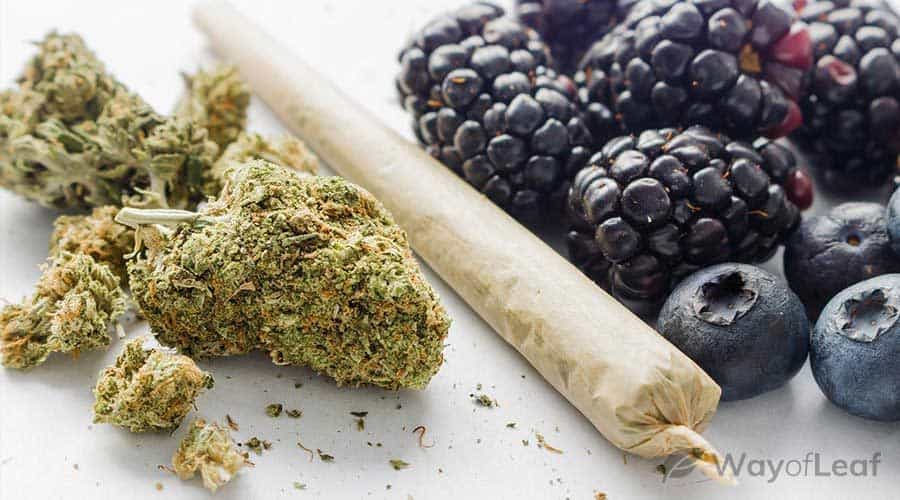 Berry White is a medium-sized cannabis plant with large bluish-colored buds. Depending on the plant, the buds can even turn purple. Berry White plants produce a dense coating of trichomes with bright orange pistils growing prominently around the leaves.

The Berry White strain is generally considered to be a relatively easy strain to grow for several reasons. Firstly, it naturally displays high resistance to mold and mildew; therefore, humidity levels are less of a concern for indoor growers.

A Berry White plant is naturally compact and doesn’t require much pruning to keep it under control. However, training the plant and removing the lower foliage will help provide more energy to the buds and boost the overall yield.

Related article
What Is the 12-1 Lighting Method [Does It Increase Yield or Potency?]

You can grow your Berry White seeds either hydroponically or in soil. Growers using the hydroponic method find that it helps with resin production. Growing the seeds in soil can maximize the plant’s terpene profile and bring out its blueberry flavor and aroma.

Outdoors, Berry White thrives in a warm, dry, sunny climate. The optimal temperature range for this particular plant is between 70-80 degrees Fahrenheit. It is ready for harvesting around early October and produces around 18 ounces per square meter.

Berry White’s indoor flowering period is short at between 7-8 weeks. These plants produce an average indoor yield of around 16 ounces per square meter.

Berry White can contain up to 22% THC.

Berry White’s relaxing effects may make this strain a suitable option for alleviating stress and anxiety. Its ability to calm an overactive mind and instill deep relaxation may make it useful for insomnia. However, cannabis consumers with insomnia generally opt for more heavily sedating pure indica strains to address their condition.

However, Berry White consumers rate its use as an antiemetic as only average and say that it only moderately increases appetite.

Possible Side Effects of the Berry White Strain

The main side effects associated with Berry White are cottonmouth and dry eyes. While Berry White weed induces relaxation, users say that it generally does not cause couch-lock.

Overconsuming this strain can cause dizziness, as well as increased anxiety and paranoia.

Its effects are beneficial for both recreational and medicinal cannabis smokers.

As Berry White’s growth difficulty is rated as easy, it is a suitable strain for a novice grower. Berry White’s short flowering period of between 7-8 weeks means that you can enjoy the fruits of your labor sooner, too.