Written by Editorial Team
3 min read
0 comments
Read Later
All information on this website is for general informational purposes only and is not intended or implied to be a substitute for professional medical advice, diagnosis or treatment.
Bear Dance Cannabis Strain Overview
Bear Dance is a powerful, sativa-dominant strain that has a wide range of effects. It’s super dynamic and can be useful for many different situations and conditions. This strain has hints of lemon, mint, and vanilla, and is refreshing and light. Oh, and not to mention, it comes with a whopping 33% average THC level. 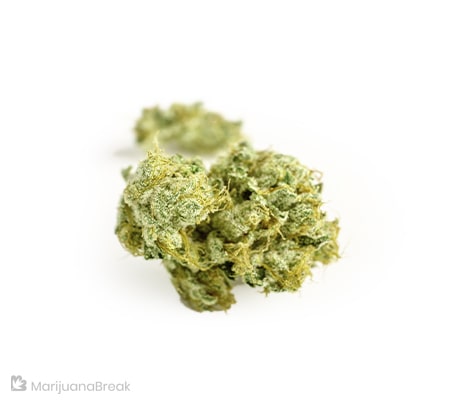 The Bear Dance strain leads with a powerful punch and finishes with an easy, blissful high. It’s a rare sativa-dominant strain, boasting a high THC level. It’s a cross between the Humboldt Snow Cap and the Pure Kush Strain, along with the Uzbeki Hashplant. This exotic breed has an enticing flavor and most users agree that it can be great for a night out with friends or a relaxing evening at home.

If you’re looking to have a good laugh, this may be a strain you would enjoy. Anecdotal reports suggest the Bear Dance strain inspires feelings of joy, giddiness, and the need to joke and have fun. It is a citrusy mix of lemon along with deep, earthy undertones.

What is the Bear Dance Strain?

Bear Dance strain weed is a sativa-dominant cross between the indica-dominant Humboldt Snow Cap and Pure Kush along with a touch of Uzbeki Hashplant. The result is a cannabis brew that is about 70% Sativa and 30% indica.

The Bear Dance strain has an aroma that is potent and distinctive. It is lemony, spicy and features a dark musk that is extremely pungent.

The Bear Dance marijuana strain has a strong, sweet lemon influence topped with a smooth hit of mint and vanilla upon the inhale. The exhale releases its earthy, almost peppery flavors. It has been reported as extremely potent, but most users agree that it is tasty and pleasant.

Bear Dance seeds have been reported to be moderately difficult to grow. Anecdotal evidence states that this strain can be a bit high-maintenance, though it is a short plant with a quick growing and harvesting time. However, it is versatile and does well both indoors and outside. If smell is a concern, growers must keep in mind that as this strain grows, it will begin to release a pungent odor.

As the leaves also grow fairly large, it is important that growers allow for adequate space. Most growers can expect a growing time of 9 to 11 weeks.

Bear Dance cannabis has a high THC level due to its sativa heavy background. Its THC levels can be as high as 33%.

The Bear Dance strain has no discernable CBD content.

The Bear Dance strain may be useful in combating stress and stress-induced maladies such as headaches and migraines. Users have reported feeling improved moods and decreased anxiety.  It has also been used to increase appetite and to control menstrual-related pain. The strain may be effective in treating fatigue and discomfort associated with arthritis.

Possible Side Effects of the Bear Dance Strain

Users have reported intense feelings of giddiness, including having the giggles and feeling lighthearted and silly. Others have stated that this strain leaves them feeling calm and relaxed.  It has also been cited in mitigating PMS symptoms such as cramps and lower abdominal pain. Users have also stated that it decreases the severity of migraine pain as well as other types of headache disorders.

With the Bear Dance strain, possible adverse effects include increased feelings of paranoia, tingling in the extremities, dry mouth, dizziness, and dry eyes.

Bear Dance revs the mind and gets it in gear for a great night out on the town. With its euphoric effects, it can cause users to have a laugh and feel giddy while increasing appetite and mitigating pain and anxiety. Its flavor combination of lemon, mint and dark musky earth may be very pleasant for some users, while for others it may be a bit too pungent.

Although it can be a bit more difficult to grow, users have cited its hardiness and its stocky height as a benefit. However, it also boasts large leaves which could be an impediment for growers in a small space. It has a relatively high yield and can be harvested in a short time. Users have described the experience with the Bear Dance strain as a rush, with a heady, full-bodied flavor with a smooth, euphoric let-down.