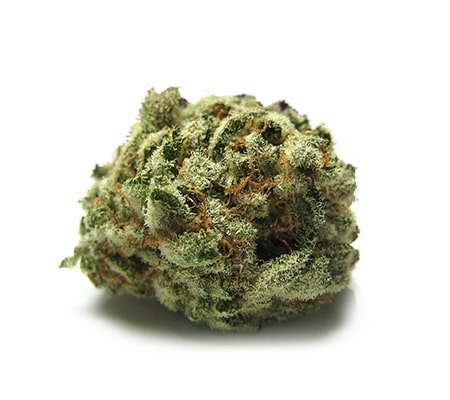 The Alpha Blue strain came to prominence in 2011 when it achieved two second-place finishes in the ‘Best Sativa’ category at the High Times Medical Marijuana Cannabis Cups in Denver and San Francisco.

Despite failing to scoop the top prize in either competition, Alpha Blue’s two high-placed finishes helped to solidify its growing reputation. Since then, Alpha Blue’s popularity has continued to soar among both recreational and medicinal marijuana consumers.

What Is the Alpha Blue Strain?

The Alpha Blue strain is classified as a sativa strain as it has a 90:10 sativa to indica ratio. When you discover Alpha Blue’s lineage, you can see why this strain is sometimes referred to as Diesel Dream. Alpha Blue is a cross between the legendary Blue Dream strain and the multi-award-winner NYC Diesel. However, It is more commonly known as the Alpha Blue strain.

With 90% sativa genetics, it will come as little surprise that this strain’s effects are uplifting and energizing.

With 90% sativa genetics, it will come as little surprise that this strain’s effects are uplifting and energizing. After consuming this strain, most experience an initial feeling of pressure around the eyes and temples. The ensuing high is euphoric and uplifting, as well as energizing. Some also experience a heightened perception of sensory stimuli.

In terms of Alpha Blue’s THC level, it usually ranges between 15-20%, which most should find pretty manageable. However, novice smokers may want to consume just a little at first to see how they tolerate this strain’s effects.

Alpha Blue’s fragrance is a pleasant combination of fruity blueberry notes and sweet, candy-like aromas. These deliciously sweet scents are offset by a strong, earthy odor, which gives Alpha Blue its distinctive and recognizable fragrance.

Related article
The 5 Best Sativa Weed Strains of All Time

On the inhale, Alpha Blue’s blueberry and diesel-like flavors are most prominent. This strain’s smoke coats your tongue with hints of skunk and berry. After exhaling, you are left with a sweet and pleasant aftertaste in your mouth.

An Alpha Blue plant grows quite tall and has medium to large, spade-shaped flowers. It has a sativa-type structure, and its light-green leaves have a fluffy appearance and texture. An Alpha Blue plant’s buds can sometimes have distinctive deep red and violet hues.

An Alpha Blue plant has a generous layer of sticky white trichomes, which gives it a slightly frosted appearance. Vibrant orange pistils grow prominently among the plant’s leaves and give this plant a bit of added color.

An Alpha Blue plant can be grown both indoors and outdoors. However, these plants thrive outdoors, particularly in a warm, dry, and sunny climate. The optimal temperature range is between 72-80 degrees Fahrenheit. 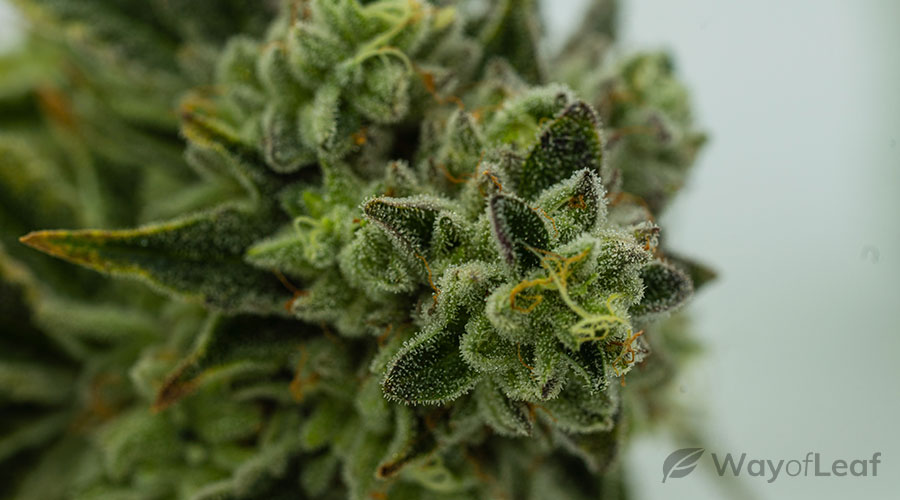 An Alpha Blue plant can grow quite tall, so topping it early in the vegetative stage is recommended. You will also need to regularly prune your Alpha Blue plants to keep their height and shape under control.

The indoor flowering period for an Alpha Blue plant is between eight to nine weeks. Indoor growers can expect a relatively modest yield of approximately twelve ounces per square meter.

Outdoor growers can expect this plant to be ready for harvesting around mid-October and a return of around fifteen ounces per plant.

Experienced Alpha Blue growers recommend curing the buds to experience the best flavor and aroma. Begin the drying process by either hanging the buds upside down or putting them on a drying rack for 7-10 days.

The buds must be completely dry before commencing the next phase of the curing process to prevent them from developing mold. When the buds are completely dry, put them into an airtight container, such as a wide-mouthed mason jar. Seal the lid tightly before moving the jars to a cool, dry place, e.g., a closet for storage.

During the first week, it’s essential to open the jar’s lids at least three times a day for 5-10 minutes. Doing so will allow any moisture in the jars to escape and the buds to breathe.

By the second week, you will only have to do this a few more times to prevent any mold from forming. After two or three weeks, the Alpha Blue buds should be sufficiently cured. If you have the patience, you can continue to cure these buds for another four to six weeks for even better results.

The highest recorded THC level in an Alpha Blue sample is believed to have been 20%. Generally, Alpha Blue’s THC level can range anywhere between 15 and 20%.

The highest recorded CBD content in an Alpha Blue sample is believed to be less than 1%.

While Alpha Blue is a great recreational strain, many medicinal marijuana consumers also use it. As already mentioned, Alpha Blue’s quality as a medicinal strain has seen it achieve a couple of second-place finishes at two separate High Times Medical Marijuana Cups back in 2011.

So, how might the Alpha Blue strain be beneficial to medicinal marijuana consumers? Well, its mood-enhancing effects may temporarily benefit those with depression and anxiety.

Also, recreational Alpha Blue consumers laud its ability to help them de-stress and unwind after a long and busy day. Perhaps medicinal marijuana consumers suffering from chronic stress could also potentially benefit from its relaxing effects.

Related article
Weed and Relaxation: Why Combine the Two?

Putting the two together…

As already mentioned, Alpha Blue is considered to be an excellent wake and bake strain. The energy boost that this strain provides may help counteract feelings of sluggishness associated with chronic fatigue.

While Alpha Blue is said to have a relaxing quality, it does not have any soporific effects. Therefore, cannabis consumers with insomnia will not find this strain useful for managing their condition.

Possible Side Effects of the Alpha Blue Strain

The most common side effects associated with the Alpha Blue strain are cottonmouth and dry eyes. However, this strain has made some feel slightly dizzy, more anxious, and paranoid after consuming it.

The Alpha Blue strain is an energizing and uplifting sativa popular with recreational and medicinal marijuana consumers. Many Alpha Blue users consider it an ideal ‘wake-and-bake’ strain due to its energizing effects.

Many Alpha Blue users consider it an ideal ‘wake-and-bake’ strain due to its energizing effects.

While this strain has caused some to feel dizzy, anxious, and even mildly paranoid, these adverse reactions are uncommon. If you are sensible and consume this strain in moderation, you are unlikely to experience any of these side effects.

15
4 min read
Video
Join the discussion
TOC
Premium
Your subscription has ended
If you love cannabis and want to support our site, join WayofLeaf Premium today and unlock
Best of all, part of your membership fee will go towards supporting the fight to legalize cannabis.
Sign Up for WoL Premium
Not now
I already have an account
×
Log in to Your Premium Account