There’s no time like the present to grow your favorite marijuana strain! In this growing guide for Platinum GSC (Girl Scout Cookies), we will provide you with several helpful tips. Bear in mind, though; you can expect to grow a slightly different Platinum GSC strain from one harvest to the next.

We recommend creating a grow journal so you can make the necessary changes when growing the same marijuana strain again.

Tip #1: What to Expect from Platinum GSC – Strain Review

Platinum GSC is an indica-dominant (60%) hybrid and a cross of OG Kush and Durban Poison with another unknown strain. Some describe it as a more ‘potent’ and ‘evolved’ version of its sister strain, Girl Scout Cookies. Its potency is certainly not in question, though, as some samples contain up to 28% THC! Usually, however, its THC level is typically in the 17% to 24% range.

Even experienced users are taken aback by the strength of this strain.

Users of Platinum GSC will quickly feel its intoxicating effects. Given its potency, it’s probably best for novices to avoid it. Even experienced users are taken aback by the strength of this strain. Most Platinum GSC consumers describe its effects as euphoric, uplifting, and relaxing. The body high is powerful, and some find it helps them to sleep better. If you still have the desire, Platinum GSC could inspire you to do something creative. However, getting off the couch to do it might be a little challenging!

It provides a clean high and is a popular medicinal marijuana strain. Platinum GSC is often used to address depression, anxiety, and other mood disorders. Some patients recovering from chemotherapy say this strain can help boost their appetite. Others use Platinum GSC to manage chronic pain, muscle spasms, joint pains, and migraines.

Platinum GSC’s growth difficulty is ‘moderate,’ but it becomes ‘high’ when you try to boost the overall yield. Overall, it is a strain that is reasonably resistant to pests and disease. However, it is a good idea to check your plants regularly for signs of common pests such as spider mites.

If you notice tiny orange, white or yellow specks on the plant’s leaves, there’s a chance there is an infestation. As spider mites are so small, a large colony can grow and spread to the rest of your crop if you are not vigilant. Just one mature female mite can produce one million mites in a month!

Commercial pesticides such as Azamax work well, but you can also try to use homemade solutions. For example, a mix of a tablespoon of bleach to a gallon of pH balanced water at a temperature of 95 degrees can devastate an infestation. Another option is to mix 9-parts water with 1-part ethanol. Spray on your plants to kill the mites on contact.

How to avoid having your marij…

There are lots of fancy growing techniques available online. However, few work better than simply ensuring your plants receive the right kind of light intensity. To get the best out of your Platinum GSC crop, analyze your grow space, and purchase the right lighting option:

Platinum GSC plants typically produce moderate yields. However, by employing some basic techniques, you could significantly increase your return. It may seem counter-intuitive, but removing your plants’ fan leaves could help boost your overall yield. You may think that you have created the perfect conditions in your grow room. You have an excellent ventilation system, and the grow room is at the optimal temperature and humidity level. However, by allowing the canopies of your plants to become too dense will hinder overall growth. 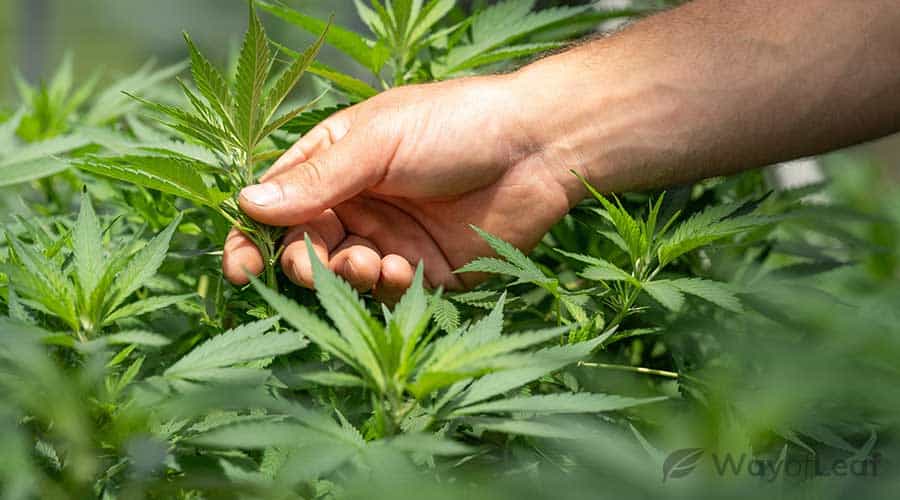 Take a look between each cola. If you cannot see into the center of the canopy, it is time to start trimming those leaves! However, you may want to keep the sugar leaves circled around the colas to make cannabutter.

Next, look down on your plants. If excess fan leaves are causing the colas to be blocked from the light, remove them! Obviously, remove any leaves with powdery mildew; this can arise when you don’t trim away excess leaves early enough.

Platinum GSC is a heavy feeder, so feel free to provide it with lots of nutrients. Make sure it gets adequate amounts of the following nutrients:

Be sure to include other micronutrients and secondary nutrients that marijuana plants need in your feeding schedule. Reduce the nitrogen level in the flowering stage, and stop feeding your plants a week or two before harvest.

Some growers recommend gradually reducing your plant’s nutrient intake up to four weeks before harvest time. It is normal for your plants to begin losing leaves near the end of the flowering stage. Don’t mistake this for nutrient deficiency and overfeed your crop! If you add too many nutrients at this late stage, you prevent the plant from developing buds properly.

When you reduce nutrient intake at this point, the Platinum GSC buds should begin to swell dramatically. It also ensures there won’t be any nasty ‘nutrient taste’ in the buds when you use them.

Tip #6: Should You Grow Platinum GSC Indoors or Outdoors?

Platinum GSC is a versatile strain that grows well indoors or outdoors. If you grow it indoors, it will yield around 12 ounces per square meter. It is likely to produce relatively small ‘popcorn’ buds covered in trichomes.

Outdoor growers can expect it to be ready for harvest by mid-October, and it yields around 16 ounces per plant. However, please note that Platinum GSC does best in a warm climate (we’ll discuss this in more detail in Tip #8).

Consider topping the plant regularly to develop several new bud sites. We recommend using a greenhouse if you have access to one. You will have all the benefits of outdoor growing, without concerns over the climate. Also, you will be able to enjoy multiple harvests every year.

Related article
How to Set Up a Greenhouse for Weed

Get the most from your cannabi…

Platinum GSC’s flowering time is 8-10 weeks. Some use the ‘pistil method’ to determine if a marijuana strain is ready for harvest. However, the ‘trichome method’ is more accurate. Use a handheld magnifying glass with a magnification of between 30x and 100x.

As your crop reaches its highest potency, its trichomes turn from clear to cloudy white and eventually turn amber. During this point, the trichomes hit their highest THC content and start to break down because of exposure to UV rays and oxygen. When THC degrades in this manner, it turns into cannabinol (CBN). CBN reportedly has potential health benefits, and it may be useful for addressing pain, insomnia, and inflammation.

Once the trichomes change to an opaque white color, it means they are no longer producing THC.

Once the trichomes change to an opaque white color, it means they are no longer producing THC. Harvest at this point if you want the most potent Platinum GSC.

Tip #8: What Is the Best Climate for Growing the Platinum GSC Strain?

Platinum GSC grows well in a warm, Mediterranean-type climate. Indoor growers will need to keep daytime temperatures between 68- and 80-degrees Fahrenheit. This strain also thrives in low humidity. As a rule of thumb, keep the humidity level between 55-70% during the vegetative stage.

Unless you have tasted both, you may assume that GSC and Platinum GSC are virtually the same. There are a myriad of similarities, although GSC has a more minty taste. The Platinum version is also a little more potent.

Overall, Platinum GSC is a potent yet relaxing strain that users say can help soothe aches and pains. It has a skunky smell coupled with a cinnamon and berry taste that most users enjoy. Unfortunately, its high THC content makes Platinum GSC unsuitable for novices.

We hope that these tips for growing Platinum GSC will make the growing process more straightforward. Let us know how you got on in the comments section below.

Is MiracleGro Good for Growing Marijuana?

It may not be as helpful as you think!

How to Grow Purple Marijuana – The Full Guide

How to grow this chocolatey strain

Why Does Cannabis Turn Purple [Myths and Facts]

We separate the myths from the facts

5 Hacks to Increase THC When Growing Your Own Weed

How to Grow Critical Kush Marijuana

Everything you need to grow this heavy-hitting strain

When Is the Exact Time to Harvest Cannabis Plants?

Know what to look for!

6
5 min read
Join The Discussion
TOC
Premium
Your subscription has ended
If you love cannabis and want to support our site, join WayofLeaf Premium today and unlock
Best of all, part of your membership fee will go towards supporting the fight to legalize cannabis.
Sign Up for WoL Premium
Not now
I already have an account
×
Log in to Your Premium Account