Aromatherapy is an ancient medicinal and therapeutic technique that has been used for decades to help address insomnia, stress, anxiety, and other mental health conditions. Marijuana, with all of its wonderfully diverse oils and scents, is one of the most well-known and effective aromatherapies known.

In this article, we talk about marijuana as aromatherapy, how to use it, and whether it works or not.

Just by breaking the word down into its individual components, it’s not difficult to understand what aromatherapy is. “Aroma” refers to smells, and “therapy,” by definition, is “a treatment intended to relieve or heal a disorder.”

Aromatherapy is “the use of aromatic plant extracts and essential oils in massages or baths. Despite the increasing popularity of medical marijuana in recent years, marijuana aromatherapy is not very well known.

…the art and science of utilizing naturally extracted aromatic essences from plants to balance, harmonize, and promote the health of body, mind, and spirit.”

Many believe that a French chemist named Rene-Maurice Gattefosse was the first to use the term “aromatherapy.” He published a book under the title Gattefosse’s Aromatherapy back in 1937. The volume included early theories that the aromatic incorporation of essential oils from both plants and herbs could lead to healing effects for a wide range of physiological ailments.

Gattefosse made a conscious effort to distinguish between the terms “perfume” and “aromatherapy” (in addition to being a chemist, Gattefosse was also a “perfumer.”). He produced and marketed lovely-scented fragrances to rich fashionista types.

However, he noticed something very different about the fragrant oils from specific herbs. In addition to smelling great, he thought they also possessed “healing powers.” As such, there developed a newfound distinction between the two terms. “Aromatherapie,” (as it’s spelled in French) implied the “…therapeutic application [or medicinal use of] aromatic substances for holistic healing.”

As aromatherapy has become more well known, it has evolved into a frequently used approach among holistic medicine practitioners. Aromatherapists aim to provide a natural remedy that embraces the entire body, mind, and spirit. Here are a few useful quotes that have been said about aromatherapy and its purported healing capabilities: 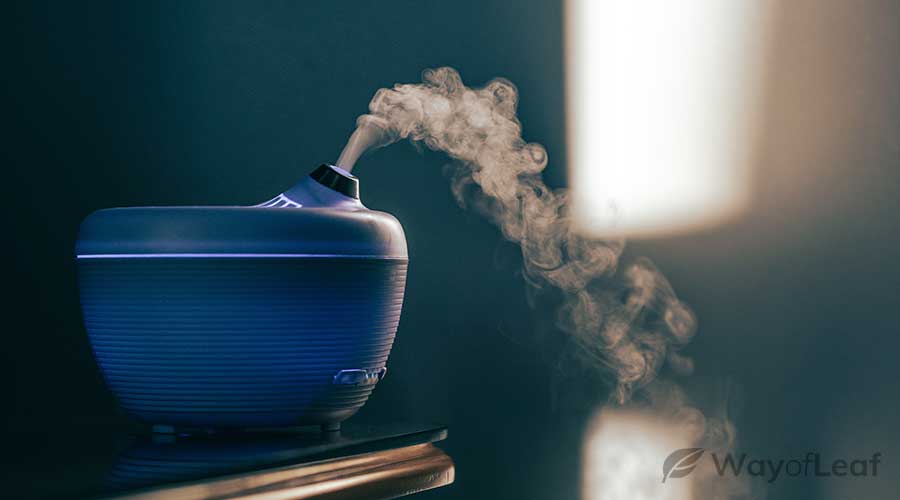 “As a holistic practice, Aromatherapy is both a preventative approach as well as an active method to employ during acute and chronic stages of illness or disease … It is a natural, non-invasive [technique] designed to affect the whole person – not just the symptom or disease and to assist the body’s natural ability to balance, regulate, heal and maintain itself by the correct use of essential oils.”

“Aromatherapy is a caring, hands-on therapy which seeks to induce relaxation, increase energy, reduce the effects of stress, [and] restore lost balance to mind, body, and soul.”

“Aromatherapy is… the skilled and controlled use of essential oils for physical and emotional health and well being.”

Marijuana Aromatherapy: How Does It Work?

First off, we must make a distinction between the potential health benefits of ingesting cannabis and using it for aromatherapy.

When you consume cannabis, active compounds like THC and CBD end up in your bloodstream. They bind to internal receptors to promote a wide range of chemical and physical therapeutic interactions. Aromatherapy does not offer this same kind of internal molecular action.

Instead, aromatherapy works via the subtle interaction of aromatic molecules with mood and behavior-oriented receptors in the brain. When you inhale airborne terpenes, it causes a slight behavioral response in the central nervous system.

What’s odd, though, is that we’re drawn to the various aromas of cannabis. This is true even if we don’t find them to be particularly appealing. Here’s an interesting quote from MarijuanaDoctors that sums up the natural human affinity for aromatic marijuana compounds:

“[As humans], we are attracted to the aroma of these terpenes even when we experience it as distasteful. It’s similar to the harsh aroma of gasoline and turpentine – even though they’re odd smells, there’s something about them that draws [us] in. Cannabis has that same attraction because of where it interacts in your brain.”

How to Use Marijuana for Aromatherapy

How do you use cannabis oil or marijuana as aromatherapy? There are a few different ways you can go about it. Here are reportedly the most effective marijuana aromatherapy methods for relieving stress and anxiety, increasing health, and promoting overall well-being:

Add several drops of cannabis or hemp oil to a humidifier. People who use this method say that inhaling the steam has a calming, therapeutic effect. While a low-temperature humidifier is recommended, using warm steam may also be therapeutic. Be careful that the steam isn’t too hot.

Use it for massaging:

Perhaps there’s no better way to experience the aromatherapeutic effects of cannabis oil than by using it during a massage. The up-close interaction allows you to inhale the natural terpenes for the entire duration of the experience. The soothing scents will linger on your skin long after the massage has ended. However, it’s worth noting that you should dilute the hemp oil with water before applying it topically.

Related article
CBD Massage Oil: Is it Different From Any Other Massage Oil?

Get the most out of your massa…

You can purchase liquid cannabis oil that’s already packaged in a spray bottle. Alternatively, you can dilute it and put it in a bottle to make your very own concoction. Either way, there are several things you can do with an aromatic hemp spray. For example, you could spray it on your pillowcase for a relaxing night’s sleep. Another option is to spray it onto a handkerchief to use while on the go.

This is our favorite way to use cannabis oil for aromatherapy. Put a few drops into a diffuser. Let the natural aromatic terpenes fill the room to create a natural, peaceful, and stress-free environment.

One unique thing about using marijuana as aromatherapy is each strain contains different aromatic terpenes. These terpenes produce different behavioral/emotional responses in the brain.

Cannabis strains that are high in the terpene pinene, for example, reportedly can produce alertness and enhance focus and memory. Here’s a short list of a few other common marijuana terpenes that provide various therapeutic effects:

Strains high in myrcene will have that traditional musky, earthy, herbal clove smell (sometimes with fruity hints). Typically, these strains have a very sedating, relaxing, soporific effect. These are ideal for use with a diffuser in the evening to help you drift off into a natural sleep.

Strains that are high in the terpenoid limonene have a lemony or citrusy aroma. Generally, they have mood-enhancing effects that may provide relief from stress and anxiety—a good choice for day-to-day use.

Cannabis strains high in linalool have a sweet, flowery, sugary smell, almost like candy. Linalool reportedly provides a calming and mildly sedative effect. This may make it good for relieving anxiety while not making you want to fall asleep.

Final Thoughts on Marijuana for Aromatherapy

While marijuana aromatherapy may not provide all the potential health benefits associated with consuming cannabis, it may offer some.

Similar to consuming cannabis, aromatherapy enthusiasts say that it has an uplifting, mood-enhancing effect on them.

The most common benefits reported by those who have tried this form of therapy include relief from stress or mild anxiety. Also, similar to consuming cannabis, aromatherapy enthusiasts say that it has an uplifting, mood-enhancing effect on them.

The easiest way to try it is by putting some cannabis oil in a diffuser and merely enjoying the ambient vapor. You could even have a loved one give you a nice hemp oil massage, too, for a fuller, richer experience.