Trying to get data on the subject of cannabis consumption is a tricky process. Marijuana is completely illegal in a significant proportion of the world. Therefore, users in strict anti-cannabis nations aren’t likely to openly admit it.

However, this article looks into the available data to see which countries have the highest percentage of weed users.

Problems with the Data

When trying to compile these stats, a major issue is that most of the data you read is outdated. If you have checked out marijuana consumption per capita online, you’ll usually find information from the World Drug Reports (WDR) of 2006 and 2011. Several nations have taken a huge number of steps forward since then.

For example, one WDR said that only 6% of the Uruguayan adult population used marijuana. However, this figure is from 2006, and the South American nation fully legalized cannabis in 2014. It is fair to say that more than 6% of Uruguayans use marijuana today! Even in the United States, the widely touted figure of 16.2% comes from 2014. Numerous states have legalized it medicinally and recreationally since then.

Finally, there is the issue of what constitutes ‘marijuana use.’ Are we talking about daily, monthly, or annual use? The WDRs refer to the percentage of a population who consumed the drug at least once in the previous year.

With all these issues in mind, we have attempted to compile a reasonable insight into the nations that love cannabis the most.

And the Winner is?

When you think about the nations with the highest rate of marijuana consumption globally, it is only natural to include the United States and Canada. After all, the substance is entirely legal in Canada. It is also legal to a majority of the American population (for medicinal use at least). However, the country with the highest marijuana consumption per capita is possibly:

Africa’s most populous nation has an estimated 206 million inhabitants and seems to have a clandestine love affair with marijuana. The 2011 WDR stated that 14.6% of the Giant of Africa’s population used cannabis in the previous year. That figure has increased significantly in the last decade, even though cannabis is completely illegal in Nigeria.

A recent African Hemp and Cannabis report suggests that Nigeria has the world’s highest rate of marijuana use. 19.4% of Nigerians aged 15+ used the substance in the previous year, and 12% consume it every month. The report says that demand for cannabis in Africa is estimated at $37 billion, $15.3 billion in Nigeria. 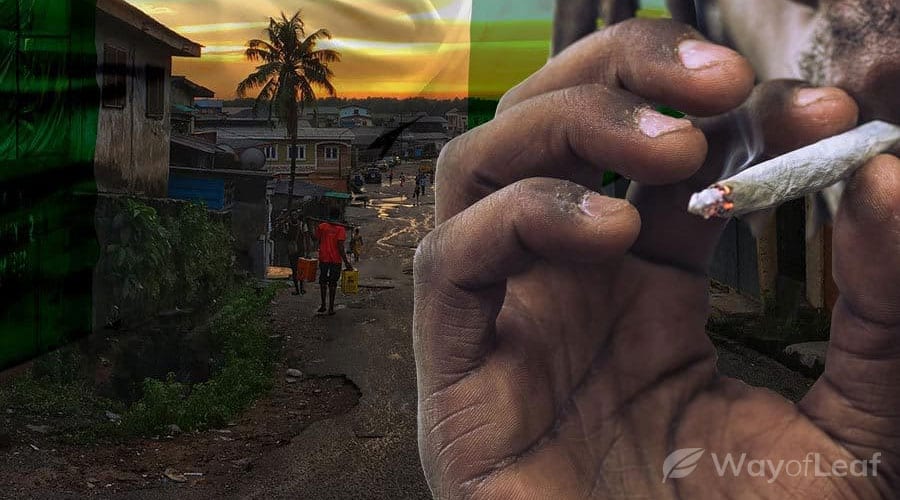 The report mentions that Nigerian farmers cultivate marijuana because it generates more cash than major crops such as cocoa. Also, it grows much faster. Many farmers who illegally cultivate the plant do so out of dire economic need. For the record, cannabis is widely grown in states such as Ogun, Oyo, Osun, and Edo.

Wide-scale marijuana cultivation has occurred in Nigeria for decades. Scholars now believe that soldiers and sailors returning from the Far East and North Africa after World War II introduced the plant to Nigeria. Cultivation of cannabis escalated so quickly that it was declared a major public issue by the 1960s.

Nigeria embarked on ‘Operation Burn the Weeds’ in 1994, with 3,500 hectares of weed eradicated in 1999 alone. If you go to Nigeria hoping to sample the local produce, you do so at your own risk. Possession carries a prison sentence of up to 12 years! Traffickers could face life in prison.

The answer is potentially ‘NO,’ but reporting is all over the place. The likely answer is Canada, but it lags behind Nigeria, according to several reports. New Frontier Data reported the aforementioned 19.4% figure for Nigeria. Its data had Canada in second place with 15.8%, and the United States was third. An estimated 15% of the American population aged 15+ have used marijuana in the previous year.

The 2016 WDR suggested that over 32% of Canadians had used cannabis in the previous 12 months. A 2017 Ipsos poll for Global News said that 38% of Canadians smoked marijuana for recreational purposes occasionally, regularly, or frequently.

In reality, it is EXTREMELY difficult to determine precisely how many people use marijuana in any nation. We can’t seem to get fully accurate data from a legal nation like Canada or a semi-legal country like the U.S. Therefore, it’s impossible to get information from countries where cannabis possession carries such a heavy price.

Australia is the smallest of the world’s seven continents by area and the second smallest by population. However, a significant percentage of the 42+ million inhabitants appear to love using cannabis. Australia, the country, has one of the lowest prevalences of marijuana use in the region as only10.6% of the nation uses marijuana in a year.

In New Zealand, the figure is much higher at 14.6% but doesn’t compare to Papua New Guinea. There, an estimated 29.5% of inhabitants use cannabis at least once a year. However, the data for PNG comes from 1995, so it isn’t easy to know how accurate it is.

Other island nations around the world seem to like a quiet smoke too. In the Northern Mariana Islands, over 22% of people use cannabis at least once a year. Perhaps we could call the region the Northern Marijuana Islands! In Palau, the figure rises to 24.2%!

Meanwhile, given its reputation for cannabis research, the reported 27% of Israelis who have admitted to using cannabis probably shouldn’t be a surprise. However, this figure, which comes from a 2017 survey, only relates to Israelis aged 18 to 27.

That’s another issue with this type of report. We’re never quite sure what percentage of people are within a certain demographic. We also don’t know if a high percentage of medical marijuana patients were involved in these surveys.

Is There Anywhere Else of Interest?

Marijuana use is on the rise in Europe. Countries such as Spain, Ireland, the United Kingdom, and France all report 6%+ of the adult population using marijuana within the previous year. Oddly enough, the Netherlands, despite its reputation, is fairly low on the list. Just 8% of Dutch adults claimed to have used cannabis within the last 12 months.

Iceland was long considered the country with the highest rate of marijuana use. An estimated 18.3% of residents use it on an annual basis in the tiny northern European nation. Other nations with double-digit use include Chile and Bermuda. Perhaps shockingly, Jamaica doesn’t rank within the top 20 in most reports. It lags behind countries such as Belize and Greenland!

Marijuana use in Africa as a whole is much higher than previously realized. The African Hemp and Cannabis report only looked at 13 countries on the continent but found some interesting information. Its data suggested that Africa was home to three of the world’s top 10 marijuana-consuming nations!

Morocco’s market is around $3.5 billion per annum, while Ethiopia’s is almost $10 billion. Of the 565 million people in the 13 surveyed nations, almost 43 million are believed to use marijuana at least once a year. In Zambia and Madagascar, over 14% of adults tried cannabis in the previous year, according to New Frontier Data.

On the Other End of the Scale

If you hate cannabis, you should consider a move to Southeast Asia. It is this region that has the world’s toughest anti-marijuana laws. Singapore appears to rank #1 for the lowest level of weed use per capita. Just 0.004% (1 in 25,000 people) of those who participated in a 2004 survey admitted using the substance in the previous year.

If this percentage holds, it would mean that around 200 people in the whole of Singapore have used marijuana in any given year. Although the survey is very old, there is no reason to suggest that the percentage is higher today.

In Singapore, the law allows a police officer to search any individual without a warrant if he reasonably suspects that there is a controlled article or drug liable for seizure. The nation’s 1973 Misuse of Drugs Act states that possession of more than 15 grams of cannabis could be punishable by death! If you are caught with a gram or two, you could be sentenced to life in prison, along with a severe caning.

Other Places Where Cannabis Isn’t Tolerated

There are over 30 countries in the world where possession of marijuana is punishable by death. Unsurprisingly, these countries have the lowest levels of usage on Earth. Brunei is probably #2 on the list, with around 0.02% of its inhabitants using weed. China closely follows it with 0.04%, and Libya is next with 0.05%.

Japan’s rate is just 0.3%, and its Cannabis Control Act is notoriously strict. Japanese authorities once detained Paul McCartney for ten days after finding seven ounces of marijuana in his luggage before finally deporting him.

Technically, anyone convicted of a drug offense in another country, let alone in Japan, is banned from entering the Land of the Rising Sun. However, celebrities such as Paris Hilton and the members of The Rolling Stones were allowed entry. Even McCartney was allowed back when he visited in 2015.

In any case, the list of nations where less than 1% of the population have used marijuana in the previous year is long. It includes Bahrain, Chad, El Salvador, Hong Kong, South Korea, Macau, Montenegro, Qatar, and Vietnam.

Estimates of the number of people who use marijuana globally vary. The United Nations places the figure at close to 159 million. The World Health Organization suggests it is 147 million. Other reports say it is over 230 million. The truth is, the real figure probably far exceeds either estimate. Cannabis laws are being relaxed in an increasing number of countries.

The global market is growing each year exponentially. In October 2018, Canada opened everything up by becoming the second country globally to allow full legalization after Uruguay in 2014. It was significant because Canada is a G7 nation. There is an excellent chance that Mexico will soon follow suit. Perhaps America will open the door to medical marijuana in the next few years.

It is quite a surprise to note that Nigeria is possibly the biggest consumer of cannabis globally since the substance is completely illegal there. Ondo state is considering a medicinal program. However, at present, being caught in possession of cannabis in Nigeria is still punishable with a severe prison sentence. By the way, if you ever travel to Southeast Asia, don’t even think about using marijuana!