There is a growing acceptance of cannabis in the United States. At the time of writing, more than one-third of Americans live in a state where recreational marijuana is permitted.

Since California implemented an MMJ program in 1996, momentum towards full legalization has grown. Unfortunately, not every state is willing to follow California, Colorado, Oregon, and others. In some of these locations, the sale or possession of marijuana is a serious crime. However, in others, the substance is decriminalized.

In this article, we check out the states that prohibit cannabis, along with possible penalties if caught using it. We also briefly look at the states with MMJ programs and locations that allow adult-use marijuana.

Though the situation is currently changing every year, medical marijuana is now legal in most states. However, there are still numerous states without an MMJ program. 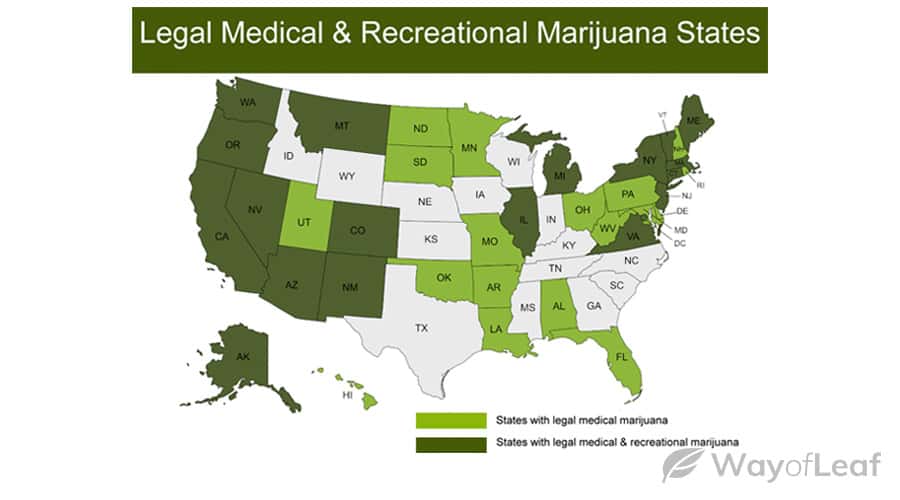 In most of these states, CBD oil is legal for purchase in pharmacies or local dispensaries. However, you may require a doctor’s prescription in some cases. In Georgia, you can use CBD oil with a maximum THC of 5% with a doctor’s recommendation.

CBD oil can’t contain more than 1% THC in Texas and must have at least 10% CBD. The THC limit is 0.9% in Tennessee and South Carolina and 3% in Iowa. You can technically get CBD oil in Idaho and Kansas. However, the maximum THC limit in Iowa is 0.1%, and CBD can’t contain a trace of THC in Kansas. Nebraska is one of the few standouts in that it technically doesn’t even permit the use of cannabidiol.

Mississippi residents voted to legalize MMJ in November 2020. However, a flaw in the ballot initiative process meant the state’s Supreme Court overturned the decision. Mississippi may eventually have medical marijuana, but it probably won’t happen until November 2022 at the earliest.

Related article
Is Industrial Hemp Legal in My Area?

In the vast majority of states, cannabis is decriminalized. This means you won’t go to jail for possessing a small amount. Instead, it is generally considered a civil infraction. You receive a fine, but the charge doesn’t go on your criminal record.

The amount that’s decriminalized depends on the state. In most places, you get away with up to an ounce. However, in Connecticut, the maximum amount is half an ounce. It is 10 grams in Maryland. Check out your state’s laws to learn more.

Most of the states that decriminalize the possession of cannabis have at least an MMJ program. The majority of ‘illegal’ locations don’t, with Mississippi, Nebraska, and North Carolina the exceptions. However, many of the remaining states classify it as a misdemeanor. The following locations could punish you heavily, however:

What Could Happen to You if You Smoke Marijuana in States Where It Is Illegal?

Don’t assume that a misdemeanor charge means you get off lightly. In Indiana, for example, you could receive a six-month prison sentence. However, things get much worse if you are arrested and found guilty in the three states we mentioned above: 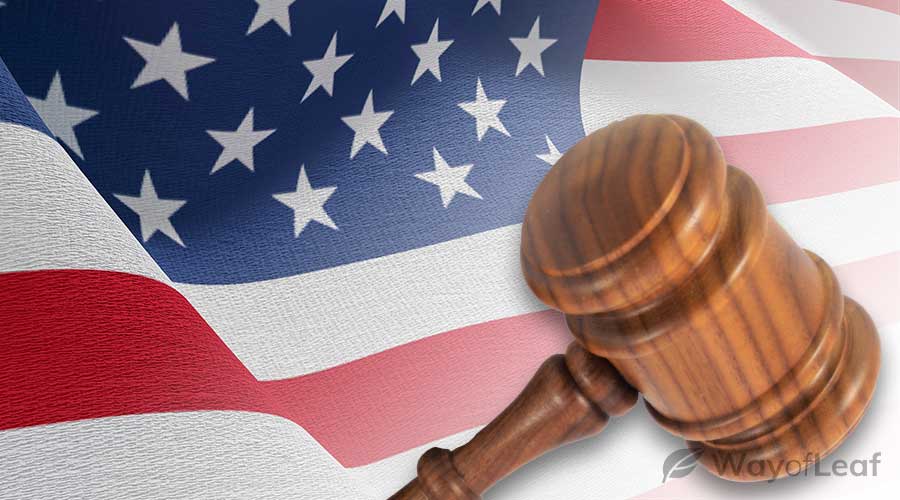 A felony conviction is a life-changing event. In general, the government defines it as a crime punishable by at least one year in prison. Apart from the huge fine and time spent in jail, felons face the following punishments when they get out:

It also means you will find it much harder to get a job or even find housing. Your record will turn off most landlords and employers.

Please note that you can also be convicted of felony possession in states where cannabis is recreationally legal! The amount is usually much higher than in places where marijuana is legal, but the jail time is still severe. In Alaska, for example, the possession of four ounces or more is a felony, with a possible jail term of five years. The possession of any amount within 500 feet of a recreational center or school is also a felony with the same punishment.

What’s confusing is how states have different ways of measuring weight. In some places, they include the containers! Therefore, if you have a few grams in a metal box, you could face a felony charge!

It gets even worse in Texas when it comes to cannabis edibles. Possession of up to four ounces of marijuana is a misdemeanor. However, it becomes an automatic felony if the weed is hash or resin extracted from the cannabis plant.

The 1989 Texas Controlled Substances Act is terrible news for edibles lovers. A single THC-infused gummy weighing less than four grams is enough to land you in prison for at least six months. A bag of hash brownies with a considered weight of over four grams is a felony. You could spend 20 years in prison.

This is because the state of Texas weighs the entire batch as if it was nothing but cannabis. You may have a batch that weighs 450 grams but contains perhaps two ounces of cannabis. Texan law states you have over 400 grams, which could mean life in prison.

If you live in any of the above states where cannabis remains completely illegal, be careful! It only takes being arrested in possession of a small amount to change your life forever. Now, let’s check out the states where MMJ programs are in place.

In What States Is Marijuana Medically Legal?

Cannabis is legal for medicinal use only in the following states:

Marijuana is also legal in the following United States Territories: Puerto Rico and the U.S. Virgin Islands. Recreational cannabis was legalized in South Dakota in November, but there is a pending legal case against legalizing recreational cannabis. It seems likely that the State Supreme Court will vote against it.

To make a purchase, you must first register with the state as an MMJ patient. This typically involves receiving a certification from a licensed physician within that state. Then you apply to the state’s department of health. Eventually, you will receive a Medical Marijuana Patient Identification Card (MMJ Card).

See our detailed list of the state-by-state processes for obtaining a medical marijuana card here.

There are several states with legal MMJ, but the program isn’t yet operational. This is the case for states such as Alabama that legalized medical marijuana recently. Depending on the state, it can take up to two years for the program to begin in earnest.

Unless you have a valid MMJ card, you could get arrested in these states for cannabis possession. Make sure you have your card on your person at all times!

A growing number of states now permit adult-use cannabis; let’s check them out below.

Where Is Marijuana Recreationally Legal?

As of 2022, marijuana is recreationally legal in the following states:

If you live in any one of these states or territories, you can go to a certified cannabis dispensary and legally buy the substance. You don’t require an MMJ card, certification, or medical documentation. Instead, you only need to be aged 21+ with an ID to prove it. In general, the maximum amount you’re allowed to buy and possess is one ounce. However, some states allow you to purchase more.

The use of cannabis in all states remains restricted to private locations. Consumption in a public place is against the law.

It is the same situation in New York and New Jersey. In D.C., there is no means to make a purchase even though you can technically possess marijuana.

The use of cannabis in all states remains restricted to private locations. Consumption in a public place is against the law. When using marijuana recreationally, treat it as you would alcohol. Use it in your own home if possible or at the property of a trusted adult friend. Also, don’t drive after using cannabis, and use it responsibly at all times.

Unfortunately, cannabis remains entirely illegal in numerous states. The possession of small amounts is decriminalized in most places. However, unusual calculations in places like Texas could ruin your life for the sake of a couple of cannabis brownies. In places where marijuana remains illegal, it is best to play it safe and not use it if at all possible.

Even in states that allow MMJ and adult-use cannabis, there are severe penalties for breaking the rules. In California, for instance, possession of up to an ounce is legal when aged 21+. However, you could spend six months in prison if you have more than an ounce.

No matter where you are, exercise caution. Know the laws in your region and stick by them. Otherwise, you could face an uncomfortable wait as a felony charge heads in your direction.

9
6 min read
Join the discussion
TOC
Premium
Your subscription has ended
If you love cannabis and want to support our site, join WayofLeaf Premium today and unlock
Best of all, part of your membership fee will go towards supporting the fight to legalize cannabis.
Sign Up for WoL Premium
Not now
I already have an account
×
Log in to Your Premium Account