At the time of writing, marijuana is illegal in 17 American states, both medicinally and recreationally. However, this is set to change to 15 states as both South Dakota and Mississippi voters recently said ‘yes’ to MMJ proposals. The latter state also provisionally legalized recreational cannabis.

In states where it remains illegal, the penalties are often severe. In Alabama, for example, personal use of cannabis is a ‘misdemeanor’ regardless of the amount. It carries a potential 12-month prison sentence along with a maximum fine of $6,000.

The sale of any amount of marijuana in Alabama is a felony. If convicted, you will receive a mandatory minimum sentence of two years in jail and a fine of $30,000. The maximum sentence is 20 years!

However, some countries have cannabis laws so strict that they make Alabama look like Bob Marley’s dream vacation spot! Here are five nations with some of the harshest marijuana laws on the planet.

Anyone familiar with Singapore’s draconian drug laws knows this nation belongs at #1 on the list. After all, this is a country known for its ban on chewing gum! Its Misuse of Drugs Act classifies narcotics into three categories.

The law states that the burden of proof falls on the defendant, so you are in deep trouble if caught. Singapore’s laws mean that only 0.005% of its population uses weed. In contrast, an estimated 12% of Americans use cannabis regularly.

Possession of the tiniest amount of cannabis could lead to a 10-year prison sentence and a $20,000 fine. If caught with 15+ grams of marijuana, you’re automatically classified as a trafficker, which could mean life in prison. If found with 500+ grams, life becomes death as you face execution.

Also, a positive drug test presumes possession even if the police find no drugs on your person.

Many of the country’s high-profile drug cases involved heroin. However, the case of Shanmugam Murugesu was a real eye-opener. It was further proof, if we needed any, that marijuana isn’t welcome in Singapore. He was found with a kilo of cannabis after returning home from a trip to Malaysia in 2003. Despite his clean record and the fact he had served in the military, he was executed in 2005.

The United Arab Emirates is a no-go area for weed lovers. The nation takes its Zero Tolerance attitude to narcotics very seriously. For instance, Dubai is described as a ‘police state’ by travelers. The authorities are always on the lookout for potential drug use. UAE Law No. 14 (1995) means cannabis is illegal to buy, sell, possess, use, or grow. The law is in place across all seven emirate states.

The mandatory minimum sentence is four years in prison if found with a trace of marijuana on your person. You also receive a fine of 10,000 dirhams, equivalent to over $36,000.

Most UAE police adhere to the law in a very literal sense. The unfortunate British tourist, Keith Brown, found this out to his cost in 2008. Brown received a four-year prison term after Dubai customs officers found 0.003 grams of weed stuck to his shoe.

In another case, police arrested a man after finding poppy seeds from a bread roll on his clothes. Some tourists are even held for possession of legal prescription drugs. By the way, if UAE authorities perform a drug test and you test positive, it counts as possession!

Those caught trafficking drugs, including marijuana, in the UAE sometimes face the death penalty. If caught selling drugs and not sentenced to die, deportation is likely along with a prison sentence of 10-15 years. You will probably receive a 20,000 dirham fine as well.

For the record, there are places where you can purchase weed in Dubai. However, at $50 a gram for schwag and the possibility of four years in prison, it isn’t worth it!

We came across a terrible story in the Malaysia Star. It began with the following cheerful proclamation: “It’s the gallows for a Thai woman who was caught carrying more than 18kg of cannabis.” Unfortunately for drug trafficker Thitapah Charoencheua, she felt the full force of the incredibly strict marijuana laws in Malaysia. It is a nation where execution for sale and trafficking of large quantities of illegal drugs is normal. 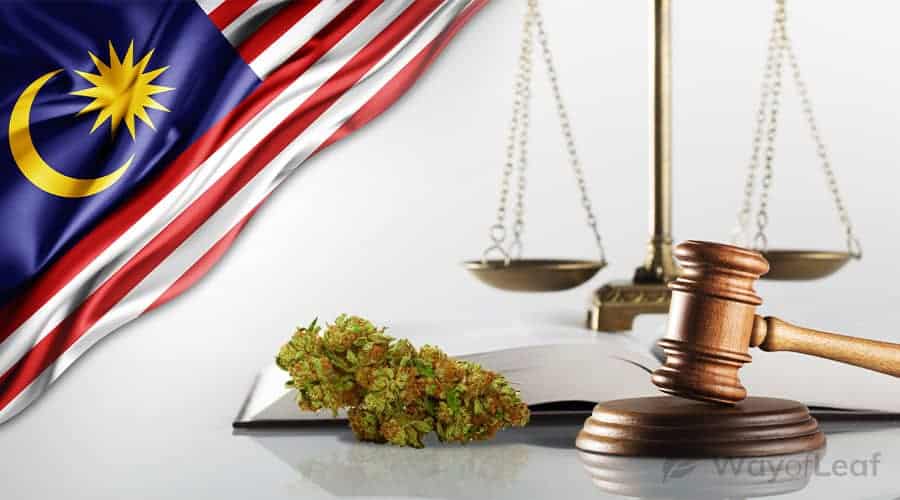 You might be thinking: “18 kilograms is a lot,” and you’re right. What if we told you that being caught with possession of over 200 grams of weed in Malaysia will result in the death penalty? Yes, death by hanging is mandatory if you possess what isn’t an enormous amount of cannabis. You also face hanging if caught with 40+ grams of cocaine and 15+ grams of heroin.

Possession of 50-200 grams of weed leads to a minimum five-year prison term along with ten lashes in some cases. Of the prisoners on death row in Malaysia, more than three-quarters are there for drug offenses. One man received the death sentence in 2009 for possession of 622 grams of marijuana. He faced the gallows in 2015.

There is possibly hope on the horizon. In 2019, Dzulkefly Ahmad, the Malaysian health minister at the time, discussed reforming the country’s attitude to cannabis. He said the drug war of 40 years had clearly failed, and a new approach was necessary. Convincing the Malaysian government to change course is challenging. However, they may act if other nations lead the way.

You could argue that marijuana laws in the Philippines are not as strict as other nations on the list. It is relatively lenient for first-time offenders. According to the Comprehensive Dangerous Drugs Act of 2002, you’ll receive six months in rehab if caught with marijuana for the first time. If you don’t learn your lesson and you offend again, you’ll pay severely!

Second-time offenders receive no mercy with a mandatory minimum prison sentence of six years. It could rise to 12 years in some cases. Cultivation of some cannabis plants could see you spend the rest of your life behind bars. The Philippines’ dictatorial leader, President Duterte, is in favor of bringing back the death penalty for marijuana cultivation. At present, Filipino law doesn’t endorse the death penalty.

This has been the case since the fall of dictator Ferdinand Marcos in 1986. Despite Duterte’s desires, there’s a chance that the Philippines could go the other way and legalize cannabis for medicinal purposes.

In 2017, the Philippines House Committee approved the Philippine Compassionate Medical Cannabis Act. Unfortunately, it hasn’t been signed into law. There is no chance of it happening until 2022 at least. Duterte will step down then but may remain heavily involved in politics.

Turkey has among the most bizarre cannabis laws in the world. It is legal for limited medical and scientific use. However, illegal consumption of marijuana results in extremely severe penalties. Remarkably, the cultivation of weed is legal in Turkey for medicinal and scientific purposes, but only in 19 states.

In Turkey, cannabis is in the same category as heroin. The consumption of any illegal drug can see you put behind bars for 2-5 years. We have heard stories where the sale of marijuana has led to prison sentences of up to 24 years.

The mandatory minimum jail sentence for selling cannabis is ten years. It increases to 15 years if you sell to a minor.

In recent years, the Turkish government has cracked down hard on drug offenses. It took this stance ever since the chaos began in Syria, one of Turkey’s neighbors.

According to Turkish drug laws, if you’re involved in a drug transaction that involves two or more people (all drug transactions, in other words), you’re deemed to belong to a criminal organization. This is why prison sentences are so stiff. By the way, Turkish prisons are notorious for the brutal treatment of inmates. It is normal for a cell to house 50 people!

In our experience, the nations with the strictest cannabis laws are in the Middle East or Southeast Asia. Islamic countries have especially harsh punishments as a rule, and prisons in most of these nations are exceedingly dangerous. In such jails, prisoners are treated inhumanely by correctional officers who know they can get away with almost anything.

There are several American states where possession of a relatively small amount of weed results in a ridiculous prison sentence. However, at least none of our states have the death penalty for weed possession. Also, you won’t go to jail because some poppy seeds from bread fell on your clothes!

It seems remarkable that countries can punish people so severely for using something grown naturally. If you’re planning to visit any of the countries mentioned in this article, don’t even think about using marijuana.

Related article
Cannabis Laws in North Korea: They Will Definitely Blow Your Mind