The Central Intelligence Agency (CIA) has always been depicted as a shadowy organization. All of its actions are top-secret, classified assignments. Therefore, it is only natural that it gets linked with various plots, such as the assassination of John F. Kennedy. While most of these conspiracy theories are unfounded nonsense, a little nugget of truth gets uncovered every so often.

However, in the case of the CIA and marijuana, it is more like an entire warehouse of information is available! The link between our nation’s intelligence agencies and cannabis predates the 1947 formation of the CIA. Ever since then, the CIA has publicly decried marijuana. However, in private, it has used cannabis for a wide range of purposes. Allegedly the organization went as far as creating its own strain! Want to learn more about the CIA’s covert marijuana actions? Well, then, we suggest that you light up a joint, sit back, and read on.

The CIA Used Cannabis as a ‘Truth Serum’

During World War II, the CIA’s predecessor, the Office of Strategic Services (OSS), began to actively seek out drugs they could use to help interrogate POWs. The National Research Council (NRC) began looking into the matter. The NRC formed a committee that included the Federal Bureau of Narcotics (FBN) Commissioner, Harry Anslinger. Anslinger was the architect of Reefer Madness and appeared to believe every word contained in this propaganda piece. 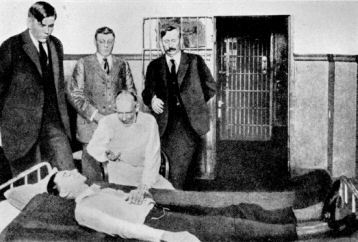 The FBN provided the OSS scientists with several drugs. Eventually, the team settled on an active chemical compound in marijuana called tetrahydrocannabinol acetate. While the OSS hoped that the cannabis compound would act as a ‘truth serum,’ it did nothing of the sort. However, it did make prisoners high and distracted them to the point where interrogators could extract information occasionally.

An FBN and OSS operative named George White became a vital part of the search for a reliable truth serum. In May 1943, the OSS and FBN tested the super-pot on George White, which knocked him senseless. One of the program’s goals was to determine which drug traffickers were helping the Nazis in France and which ones were part of the Resistance. White then tested his ‘truth serum’ on a mobster named August Del Grazio.

According to Douglas Valentine, the author of ‘The Strength of the Wolf,’ it worked incredibly well. Del Grazio revealed a remarkable amount of information about the drug trade. Valentine claims the details were so extraordinary that the OSS redacted them from documents before their release decades later. After that, the OSS used the super-pot on Nazi POWs. They continued using the drug on people until at least 1947. Eventually, though, they determined that cannabis was not a reliable truth serum.

Gary Webb, a Pulitzer-Prize winning journalist, who made the allegation, once described the CIA as the ‘Cocaine Importing Agency.’ Some suggest that the CIA aided and abetted cocaine smugglers in the 1980s. However, less is mentioned about marijuana importation in the late 1970s.

According to Webb, the CIA was heavily involved with the Mike Palmer drug ring in Detroit. The drug ring was flying in tons of marijuana in C-130s in 1977 and 1978. After his arrest in Colombia, in 1979 or 1980, the Contras recruited Palmer as a pilot. While working for the CIA, Palmer continued smuggling marijuana for the Contras. The federal prosecutor of Detroit called the operation the ‘biggest marijuana ring’ in the United States.

Then, in 1988, Palmer told the Senate that his firm had a contract with the State Department. Palmer said it involved transporting clothes to the Contras in Nicaragua back in 1986. At the time, he was working undercover as a drug smuggler for the DEA and United States Customs Service. However, Palmer denied being a CIA agent. However, he did admit to smuggling around $40 million worth of marijuana from South America into the U.S. over eight years.

In the 1970s, the CIA embarked on a drug abuse program that toured the United States. The only problem was the weed they used in their ‘drug abuse booth’ was fake! The booth gave off a marijuana smell, and allegedly they had a bag of pot that people could smell. In reality, though, this pseudo-cannabis was developed by CIA doctors.

The reason was simple. The CIA was told that it couldn’t transport real marijuana across state lines when it tried to bring the display to the American Medical Association convention.

Therefore, they created fake weed, which looked and smelled like the real thing; you could even burn it.

On a side note, the federal government’s weed for research is nothing like the real thing. It doesn’t look, feel, or smell like cannabis, which means it is all but useless for scientific research.

Did the CIA Help the Government Grow G-13?

No one knows the true origins of the cannabis strain G-13. The indica-dominant hybrid is almost as shrouded in mystery as the CIA itself.

Some believe that the rare Afghani indica supposedly originated in the 1970s. Supposedly, after being liberated from a government research facility at the University of Mississippi. Other accounts suggest that along with the FBI and other agencies, the CIA helped source the best strains of marijuana from breeders all over the planet to create a ‘super’ strain.

We have our doubts about whether this is true. However, it is practically impossible to get your hands on pure G-13. The strains available today are not the original.

Final Thoughts on the CIA & Cannabis

One has to be careful when saying anything negative about the CIA. After all, it is a powerful government agency with immense reach.

The fact of the matter, though, is that the CIA’s marijuana-related history is fascinating.

It ranges from using a weed-based compound to extract information from prisoners and criminals to allegedly smuggling marijuana into the country illegally. Add in the fake-cannabis and its drug-abuse tour and its alleged hand in creating a legitimate strain. As you can see, the CIA’s involvement in the cannabis industry is extensive – even if it doesn’t want you to know about it!

The Unwritten Rules of Cannabis Etiquette