In a way, it is pretty shocking what we put into our bodies without full knowledge of where products come from. When you go to a dispensary, how much do you know about the manner in which the weed was grown? Who is the grower? Where was the marijuana grown? Did they use chemical fertilizers or grow the cannabis naturally? If you are using cannabis oil, was it extracted via a clean extraction process? And so on.

Unfortunately, it seems as if we have another question to add: Were your buds treated with Plant Growth Regulators (PGRs)? If the buds you hold in your hand are extremely dense, consist of brown hairs, and have little in the way of discernible scent, there is a very good chance that your marijuana has been exposed to PGRs.

What Are Plant Growth Regulators?

Frankly, the name sounds ominous; anything that ‘regulates’ natural growth is normally filled with harmful chemicals! According to the Federal Insecticide, Fungicide, and Rodenticide Act (FIFRA), PGRs are any substance or mixture of substances that boost or slow down the rate of growth/maturation of plants through physiological action, or otherwise change the natural behavior of plants and their produce.

PGRs, widely used in agricultural farming on crops including peppers and eggplants, are a group of chemicals designed to increase the yield of crops, reduce fruit drop frequency, and manipulate the development of the crops and the quality of storage. PGRs are often known as Plant Growth Retardants and interfere with the hormonal pathways of plants.

They impact phytohormones which play a major role in a plant’s growth and development. These hormones are naturally regulated through environmental cues, receptors, and a plant’s genome. There are five major plant hormone classes: 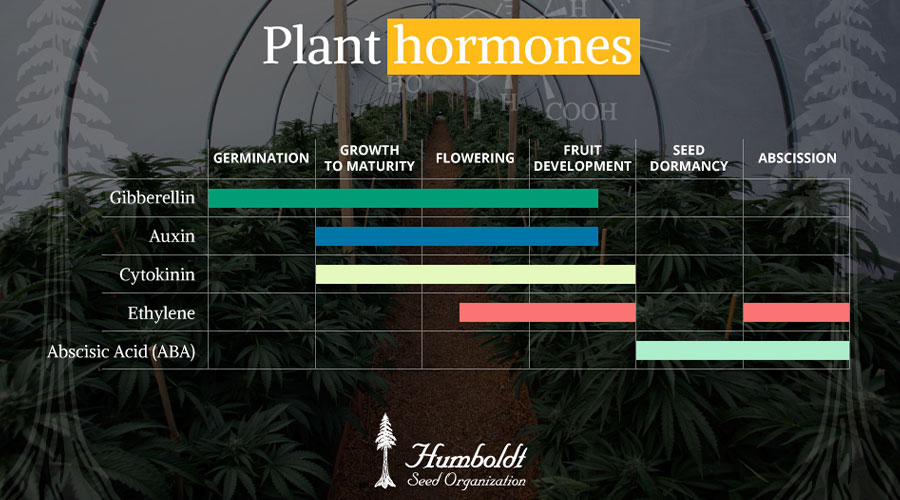 The helpful chart above shows the impact of each of the five hormones on the development of a plant. Recent research has shown that there are other classes of hormones including brassinosteroids which regulates a plant’s growth and development, along with its immune system.

It is incorrect to assume that all PGRs are harmful. Natural PGRs such as chitosan, triacontanol, and kelp are in our atmosphere and cause no problems for plants.

Before we delve deeper into the dangers of PGRs, let’s see why they are used in the first place.

There is only one reason for using chemically derived PGRs when growing a marijuana crop: Higher yields. Fatter buds = more profit, and it is a sad fact that the profit motive causes organizations to overlook pesky things such as health and safety.

In simple terms, PGRs that interfere with the creation of plant hormones prevent or halt growth, while other PGRs will boost growth. In other words, it is possible to activate certain genes to speed up the growth process so that marijuana enters the flowering stage faster. You can also ‘switch off’ genes to ensure plants grow short and stocky. It comes in very handy for growers looking to maximize their growing space.

It is possible to activate certain genes to speed up the growth process so that marijuana enters the flowering stage faster.

PGRs boost marijuana yields via cellular expansion through signal transduction pathways. Once growth-stimulating genes become activated, the cells of plants start growing and become larger. The cell’s cytoplasm intakes more water which ends up in the central vacuole of the cell. As water enters the plant’s cell, the water volume of the vacuole increases and the cell walls expands.

Plant cells have greater water retention. The hormone, auxin, is involved in the growth of the cell wall by acidifying it with the aid of expansion proteins. The cell wall is made from cellulose, which increases thanks to auxin. Although your harvest will be heavier, the quality is severely reduced because this extra weight consists of water retention and extra cellulose. In a nutshell: You may have ‘fatter’ buds, but the THC content of your marijuana plants is compromised.

The Dangers of PGRs

While a lot of commercial growers are deliberately using PGRs, there are plenty of others who are using them unknowingly. You will find them in growth boosters, nutrients, and vitamin/hormone enhancers.

PGRs were first discovered in the late 1920s and were used in agriculture for over 40 years. They were finally banned for use on consumable food crops in the 1970s and in some nations, PGRs are classified as pesticides.

The infamous Alar scare of 1989 is a clear sign that PGRs should not be used in marijuana. Also known as daminozide, Alar is a manmade chemical that was used for the faster maturation of cherries and apples. The FDA approved its use in 1968 after two years of carcinogen testing on rats.

However, in the 1970s, Dr. Bela Toth discovered that Alar had caused tumors in the livers, lungs, kidneys, and blood vessels of mice when used at several times the maximum tolerated dose (MTD) for men. In 1978, the National Cancer Institute released a report which concluded that Alar was a ‘weak’ carcinogen. However, research into unsymmetrical dimethylhydrazine (UDMH), Alar’s chemical breakdown product, found a correlation between exposure to the chemicals and cancerous tumors in lab animals.

Related article
Pesticides on Your Weed: Should You Be Concerned?

Here's what you need to know…

In 1984 and 1987, the Environmental Protection Agency (EPA), classified it as a probable human carcinogen, and banned Alar for use in U.S. food crops in 1989, although it was still permitted in non-food crops. The entire scandal is estimated to have cost the United States apple industry approximately $100 million, so we don’t expect marijuana growers who use PGRs to go quietly into the dark night.

Paclobutrazol (PBZ) is another commonly used PGR and is a real problem in Australia apparently. It is another plant growth retardant that binds to enzymes crucial to the weed growing process. PBZ inhibits the terpene synthase enzyme which creates a blockage of sorts between the terpene synthesis and THC synthase pathways.

Ultimately, PBZ reduces a hemp plant’s ability to produce THC, which means those CBD products you are using can also contain PGRs. PBZ also inhibits the development of terpenes, which is why hemp grown using it has no real smell.

Buds treated with this chemical are normally very hard and covered in thick hairs that are also entangled. Combustion of PBZ results in the compound breaking down into nitrosamines, which happen to be one of the most carcinogenic compounds in cigarettes! Side effects include infertility in men and liver damage.

Chlormequat chloride is another potentially harmful PGR and is an approved pesticide in the European Union. It increases crop yields but is now known as an ‘extremely hazardous’ substance in the United States. Studies on mammals have found that it could cause liver damage.

Uniconazole increases root system size, and it is prohibited in certain states. Although it hasn’t been studied as extensively as other PGRs, the available research suggests it is even more harmful than PBZ. Side effects include irregular respiration and liver toxicity.

PGRs Are Bad for The Environment

It appears as if residual PGRs in soil and water can also cause serious damage to fish and waterways. It is also a sad fact that a soil’s microorganism diversity is negatively impacted by PGRs. As you know, chemical fertilizer run-off is destroying our rivers, and the same is true with PGRs.

PGRs have been described as being analogous to athletes using performance-enhancing drugs such as anabolic steroids. While the athlete benefits from faster recovery and greater muscle growth, there are serious side effects involved such as cardiovascular damage. A bodybuilder could look as powerful as a stallion on the outside, but internally, his body could be at breaking point. This is why we hear reports of competitive bodybuilders dropping dead from heart attacks before the age of 50.

Likewise, marijuana plants treated with PGRs may look good in terms of size, they are disguising a weak product.

How Do I Know If My Weed Was Treated with PGRs?

It is important to question the source of your marijuana, even if you purchase it from a reputable dispensary. Look for extremely hard buds covered in brown hairs with a lack of visible trichomes and scent. One thing you will notice is that the marijuana looks ‘ugly.’ Dark and dull buds with dense brown hairs are NOT aesthetically pleasing!

Once you have a little bit of cannabis knowledge, you will learn to differentiate the thick-stemmed dark PGR weed from organically grown weed that is colorful and filled with life.

It is important to remember that not all PGRs are bad. There are several naturally occurring PGRs capable of boosting a marijuana plant’s genetic potential. Chitosan, for example, is an organic molecule derived from chitin. It is found in a crustacean’s exoskeleton, and NASA is currently experimenting with it to see if it can help plant growth in space. Triacontanol is another natural growth stimulant which could increase yields rapidly.

One thing worth mentioning is that studies which showed the harmful effects of PGR typically involved enormous amounts that you are unlikely to consume in a lifetime. One of the alar studies (on UDMH) for instance, involved anywhere from 133,000 to 266,000 times the highest estimate for a preschooler’s daily amount of UDMH consumed when eating an apple!

In reality, the threat posed by PGRs may be overblown, but it is nonetheless something we need to take seriously.

It is also worth noting that for every study which shows the harm caused by PGRs, there is at least one more that finds minimal impact on human health. You could argue that consuming PGR laden weed is no more dangerous than eating junk food. This may come as some comfort to British readers since PBZ is allowed in the growth of cherry, pear, apple, and plum trees!

In reality, the threat posed by PGRs may be overblown, but it is nonetheless something we need to take seriously. Whenever possible, we recommend only using organically grown marijuana.