Picture the scene. You are wandering down a highway when, suddenly, you see a group of plants that appear different to the rest. Your brain is telling you one thing, but you refuse to believe it is your lucky day. A sudden breeze arrives, causing these plants to sway majestically. You edge ever closer, the level of anticipation growing. YES! You have stumbled upon cannabis growing naturally in the wild. Time to light up! Or is it?

What Have I Found? Is It Cannabis?

First and foremost, you must understand that what you, Miss Marple, have uncovered, is called ‘ditch weed’ in the U.S. Known as wild marijuana or feral cannabis, it is usually descended from industrial hemp plants previously grown for fiber. The DEA says ditch weed is wild scattered marijuana plants with no evidence of tending, fertilizing, or planting. By the way, cannabis technically can’t be ‘wild’ in America since it is not a native species here. The correct term, in this case, is ‘feral.’

The Administration created a Domestic Cannabis Eradication/Suppression Program in 1979. Federal funds were provided to get rid of marijuana across the United States. Within 12 years, the program claimed it removed well over 100 million wild weed plants. Most of them were in Nebraska and Indiana for the record. In contrast, only six million plants were cultivated in the same timeframe. In 2003, a report claimed that cultivated cannabis accounted for only 1% of marijuana destroyed under the program. The rest was feral.

This form of cannabis is extremely tough and can disperse its seeds across a large radius. Incredibly, these seeds can remain dormant for up to 10 years before sprouting! The state of Minnesota classified hemp as a noxious prohibited weed, along with various thistle species. This is because it damaged the plowing equipment of farmers! Like most states, Minnesota now has an industrial hemp program in place.

Where Am I Likely to Find Cannabis Growing Naturally?

Anti-marijuana campaigners will wince when they hear how widely weed grows around the world. It is illegal in the mountain nation of Bhutan, yet thrives on rooftops! In countries such as Jamaica and Mexico, the heat and humidity mean fields of cannabis are in an enormous number of places. You can find feral marijuana in dozens of countries around the world.

Take a trip to any Himalayan village, and you will likely see the plant thriving. Alternatively, travel to Pakistan, China, India, or any other nation in that region. In northern Pakistan, for example, cannabis bush can grow to the height of a one-story building! In Afghanistan, it is incredibly easy to grow marijuana. Indeed, it became the world’s leading supplier of cannabis in 2010!

What About Wild Marijuana in America?

Despite the best efforts of the government, wild weed also runs riot in the United States. Vast amounts of time and money went into programs such as the New York City Marijuana Massacre. It is a ‘problem’ that goes back over a century. In 1914, the U.S. Department of Agriculture wrote on the abundance of hemp as a wild plant. Its report said you could find this form of marijuana in southern Minnesota, Iowa, and Missouri.

The issue only worsened in the years after World War II. The American Midwest was the scene of widespread industrial hemp cultivation. The goal was to use the versatile plant to aid in the war effort. Production shut down in the late 1950s, but the damage was done. Since then, the plant has re-seeded naturally and spread throughout states such as Minnesota, Iowa, Nebraska, Oklahoma, and Missouri. Cannabis activists have also deliberately planted seeds in secret.

In Canada, feral cannabis isn’t as widespread because the colder winters are harsh on the plants. Also, our northern neighbors don’t have a history of large-scale hemp cultivation like America. Besides, cannabis in Canada is now legal for recreational use! Even so, you can find patches of tough ditch weed in all of Canada’s provinces if you look hard enough.

How High Will I Get if I Decide to Smoke Wild Cannabis?

Take a trip along the roads of Nebraska, Kansas, and Iowa, in particular, and you will see miles of cannabis growing naturally. In the likely event that you find some, your first thought is probably to fill up your car with the stuff! Think about it; you could easily bring thousands of dollars’ worth of it home.

Alas, you are unlikely to enjoy an intoxicating high, no matter how much of it you smoke. It is likely weed descended from hemp fields from the days it was a significant crop. In those days, farmers bred hemp for fiber used in rope, clothes, and other useful items. The THC content is minimal. Even today’s hemp must contain a maximum of 0.3% THC, incidentally.

Also, there are male plants mixed in with ditch weed, so it gets pollinated and puts its energy into creating seeds. Those who have tried to smoke it say they occasionally get a headache. If you have never tried cannabis of any type, perhaps the experience will prove pleasant. However, those with pot-smoking experience are unlikely to enjoy it.

Some claim that people get hemp mixed up with ditch weed. It is an easy mistake to make; even the police find it hard to differentiate. These individuals assert that you will get high if you smoke enough feral cannabis. The amount you need depends entirely on your tolerance level.

There is also a possibility that you find ruderalis weed. It usually grows in Russia or Mongolia. However, cannabis lovers have certainly planted some ruderalis seeds in the wild. It is an exceptionally tough plant, more than capable of coping with inclement weather. It has a low level of THC but should provide a better high than the ditch weed you find. Ruderalis plants grow short and sturdy, so you will notice the difference between it and tall ditch weed.

How to Find Marijuana Growing Naturally

If you have a car and time to kill, locating feral cannabis doesn’t take a great deal of detective work. Travel to the states we mentioned above, and cruise the roads for a while. Soon enough, you will find what you’re looking for. It isn’t unusual for ditch weed to reach a height of nine feet, so it will easily stand out!

As it is untended, the buds aren’t sticky, even though it will probably smell good! It is also important to note the location. There’s a possibility that pesticide or toxin run-off will negatively impact the quality of the bud. Is it worth risking your health (and liberty) for a minor high that could damage your health?

As far as the time of year goes, you are better off waiting until the fall season. It is at this stage that most cannabis plants flower outdoors.

The Cannabis Is Beckoning Me! What Do I Do?

First of all, you need to gauge how mature the plants are. If they are in the vegetative stage, there is no point in taking any home. These plants are several months away from producing usable buds. If they are tall and producing nugs, you have the option of taking a few free samples home with you. 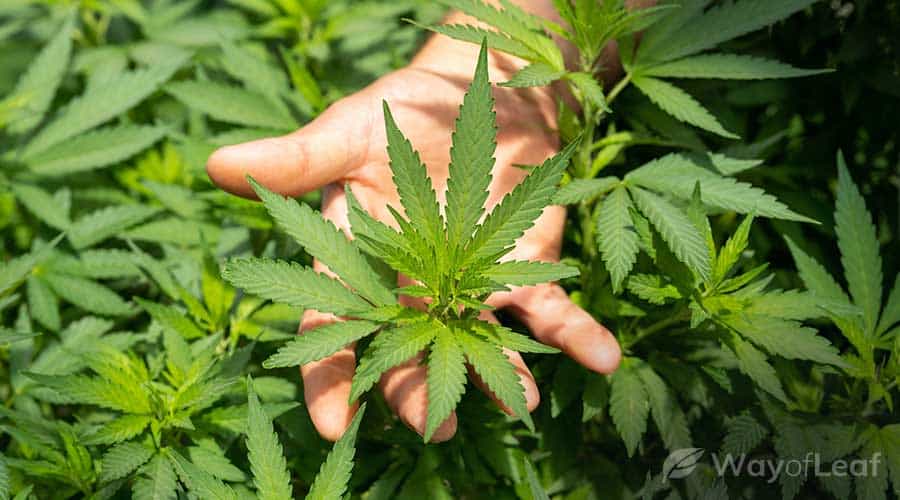 However, this carries potential legal issues. There is a possibility that local police are well aware of the cannabis, and are watching out for people stealing it. While there probably isn’t an officer hiding in the bushes, you could find yourself in a police car. There is also a chance that the cannabis is part of an illegal growing operation. Once again, there is likely someone watching the crop. If they catch you taking some, the police will become the least of your worries.

Your second option involves getting in contact with the police. If they are unaware of the cannabis, they may thank you for bringing it to their attention. Those who regularly use the field won’t be as grateful! That said, you should consider the location. If it is within walking distance of a town, you can justify your actions by thinking about the possibility of children using it.

The third option is to try and claim the plants. This is another decision fraught with legal jeopardy. If they are not ready to harvest, you have to tend to them. This is illegal in practically every state unless you have an exclusive grower’s license. Even in legal states, growing is only allowed in a private space. Tending to these plants requires being outdoors in a public space, an illegal act.

What to Do if You Find Cannabis Growing Naturally – Final Answer

The final, and most sensible option, is to admire the plants and go on your way. Take a few pictures to show your friends, but make sure you don’t take any weed with you! If the plants are growing miles away from civilization, you can forget about them with a clear conscience.

Assuming they are close to a town, you can get in touch with the police for the sake of local kids. Overall, it is exciting when you find a field full of ditch weed. However, you will need to smoke a lot to get high. Also, there are too many legal obstacles to consider.

Is it a safe extraction method?