By now, you are probably aware that marijuana is legal in 33 states plus D.C. It is a clear indication that America is beginning to embrace weed. Of the 17 states that don’t have an MMJ program, only a handful have regressive policies. The majority of states no longer throw people in prison for possession of a few grams of cannabis.

‘Decriminalization’ of marijuana means a reduced penalty for being caught in possession of small amounts. This amount varies depending on the state.  In Ohio, recreational weed is illegal. However, since 1975, possession of up to 100 grams of the herb has been decriminalized.

A felony charge is a complete game-changer. It usually means serious prison time. You will find it hard to get employment or accommodation. In contrast to Ohio’s forgiving policies, in Arizona, possession of any amount of cannabis remains a felony. You face a prison term of between four months and two years if caught with one gram!

North Carolina has earned a reputation as another state that’s tough on marijuana ‘crimes.’ It currently has no medical marijuana program, and recreational weed is strictly prohibited. The state has decriminalized the herb, but it is far from the most lenient non-legal state!

A Brief History of Marijuana in North Carolina

There is little evidence that NC didn’t fall in line with the rest of the country in the 1930s. By 1937, America had effectively banned weed via the Marihuana Tax Act.

As the number of arrests began to soar, a few states decided to act. There was a brief wave of decriminalization with penalties reduced for low-level infractions. North Carolina joined the party by decriminalizing the herb in 1977. Practically nothing happened in terms of legislation for decades after.

Lawmakers introduced a medical marijuana bill in May 2014. It didn’t get very far and fell at the House Committee in March 2015. The Committee also introduced legislation that blocked consideration of any bill with MMJ components for two years.

The only relevant cannabinoid legislation to pass occurred in 2015 when Governor Pat McCrory signed HB 766 into law. It permitted patients with intractable epilepsy to use CBD oil. However, the bill did not create any infrastructure to allow people to purchase CBD within NC legally.

Kelly Alexander Junior has arguably done more than any other politician in North Carolina for the cannabis cause. Since 2009, he has filed a marijuana-related bill in the state General Assembly six times. His efforts, while commendable, have yielded nothing in the way of reform. On every occasion, the bill didn’t even make it to the House floor for a debate, let alone a vote.

His ‘Reform Marijuana Laws’ bill (HB 994), was optimistic but doomed to failure. He filed it in May 2019 and aimed to change North Carolina’s cannabis laws radically. HB 994 allows citizens to possess up to four ounces legally. One aim was to strip away law enforcement’s power to stop and search. HB 994 also wanted to expunge convictions for possession of up to four ounces.

At the time, Corey Hedgepeth of NORML praised the ‘wonderful bill.’ He quoted a 2017 Forbes report that states would save $20 million on average in Medicaid costs if there were full legalization. North Carolina currently spends around $55 million per annum to enforce existing marijuana laws. Incidentally, other politicians filed a bill in April 2019. It also called for the decriminalization of fewer than four ounces.

In July 2019, lawmaker Jimmy Dixon neatly summed up why NC faces a brick wall concerning weed. He wanted to ban smokable hemp because it is often confused with marijuana. His main reason for a ban was because the state’s law enforcement dogs and handlers will be out of a job!

What Are North Carolina’s Marijuana Laws?

Although North Carolina decriminalized possession of cannabis, it is only the case if you have less than half an ounce. It remains a ‘misdemeanor’ according to NORML and comes with a fine of up to $200. Possession of between 0.5 and 1.5 ounces carries a jail term of between 1 & 45 days, with a $1,000 fine. If you have a criminal record, you could spend up to 120 days in jail. 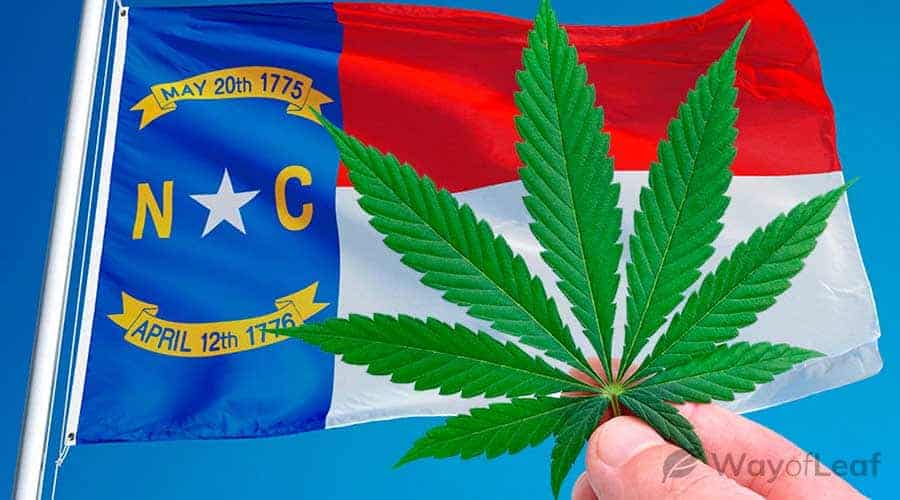 Things get serious once caught with more than 1.5 ounces in North Carolina. You enter felony territory with a prison sentence of 3-8 months. You receive the same penalty if caught trying to grow or sell less than 10 pounds of cannabis. Once you have more than 10 pounds, you are classified as having the intent to distribute. The mandatory minimum sentence at this point is 25 months. You also receive a fine of up to $5,000.

The proposed bills to decrease penalties for up to four ounces make sense. The existing system threatens to ruin lives for the crime of holding slightly more than 42 grams of marijuana. As the ACLU points out, African-Americans are almost four times more likely to get arrested for cannabis possession than whites. This is despite the fact that whites use it more often!

Dr. Frank Baumgartner performed detailed research into policing and race. In North Carolina, Hispanic and African-American drivers are twice as likely to be pulled over as whites. When this happens, they are also twice as likely to get searched.

Baumgartner points out that police officers have a considerable amount of discretion. He claimed that property search numbers would fall 50% if police focused on stopping drivers for safety violations. Instead, they usually pull cars over for having a busted tail light or expired tag. At this point, they can ask you to step out of the vehicle and perform a search. The chances of this happening increase significantly when you are not white.

There are many causes where acting on suspicion, or ‘probable cause’ has resulted in the unnecessary escalation of a situation.

Take the case of Trevon Cole in Las Vegas in 2010. During a drug raid, Cole was shot dead by police. They found no weapons at the scene. In 2012, police shot Ramarley Graham as he tried to flush cannabis down the toilet in New York.

South Carolina police in Seneca shot Zachary Hammond in 2015 during a marijuana bust. The list goes on and on. Incidentally, North Carolina was #10 for most marijuana arrests in research conducted by the ACLU in 2010. Overall, 12 states were responsible for approximately 70% of all arrests. Black people comprise 22% of NC’s population. They accounted for 50% of all cannabis possession arrests.

Even the fine paid for possession of a small amount of weed is high in North Carolina. Add in court costs and drug classes, and you must pay over $400. Then there is an additional $175 to get the citation expunged. One UNC sophomore had to resort to becoming a stripper to pay the penalty.

What About Hemp in North Carolina?

Farmers grew hemp in NC since the 16th century. The state stopped growing hemp legally in around 1940. The bill made into law in 2015 allowed the use of hemp extract for intractable epilepsy, and little else. North Carolina provides for hemp production, but only as part of a pilot program permitted under federal law. Senate Bill 313 in 2015 allowed the Industrial Hemp Commission to create a legal and licensing structure.

The state began growing hemp in 2017. It planted around 1,000 acres of hemp in that year. It was a disaster for many farmers. The DEA refused to permit transportation of the crop and also declined to issue permits. The result was late planting and the loss of a high percentage of hemp.

The North Carolina Farm Act will change everything if passed. It will help the industrial hemp industry grow. However, the version of the act approved by the House is different from the Senate. For example, it includes a provision to ban smokable hemp.

The tide is turning, however. By August 2019, there were more than 1,500 licensed hemp growers in NC. There are now as many certified hemp growers as tobacco farmers! Whether the Farm Act passes is open to question, although the outlook is good.

At the time of writing, it is challenging to buy CBD in North Carolina, let alone cannabis. Technically, you can only get cannabidiol if you have intractable epilepsy. Therefore, it is not a shock to learn that weed is NOT legal in North Carolina. It is incredibly unlikely to implement an MMJ program within the next few years.

Despite the efforts of a few lawmakers, the majority have no interest in ending the needless prohibition.

If you live in North Carolina, be very careful if you use weed illegally. The state doesn’t give you much sympathy.