If marijuana becomes federally legal, it will, unfortunately, have nothing to do with its potential medicinal qualities. The world, and especially politics, revolves around money. In states where cannabis is legal, their overflowing coffers are enough to silence plenty of objections. This is especially the case in locations that allow recreational cannabis.

Sales in California, for example, continue to grow. The state generates approximately $350 million per month from cannabis sales.

In states where recreational use is legal, the sky’s the limit because of the extra taxes placed on users.

In states where recreational use is legal, the sky’s the limit because of the extra taxes placed on users. For example, in California, cultivators have to pay a product tax of $9.65 per ounce of flowers and $2.87 per ounce of leaves. Customers also pay an additional 15% excise tax on top of the weed market price, which already has in-built taxes.

Colorado also has a 15% excise tax on the sale of weed from cultivators to retailers. These dispensaries pass the cost of the added tax onto consumers. The state has a 15% sales tax that customers must pay. In Massachusetts, the excise tax was raised to 10.75% in 2017, after concerns that the initial 3.75% rate was too low.

The black market is still causing a dent in cannabis tax revenue. California had hoped to exceed $1 billion per annum in tax revenue. The current rate is about one-third of expectations.

We know that state treasuries have extra cash because of marijuana legalization. We don’t even need to go into the money saved in policing and judicial costs. However, what we aren’t necessarily aware of is how states spend their marijuana tax money. Let’s take a look at some proposals and programs promised and already offered by certain states. 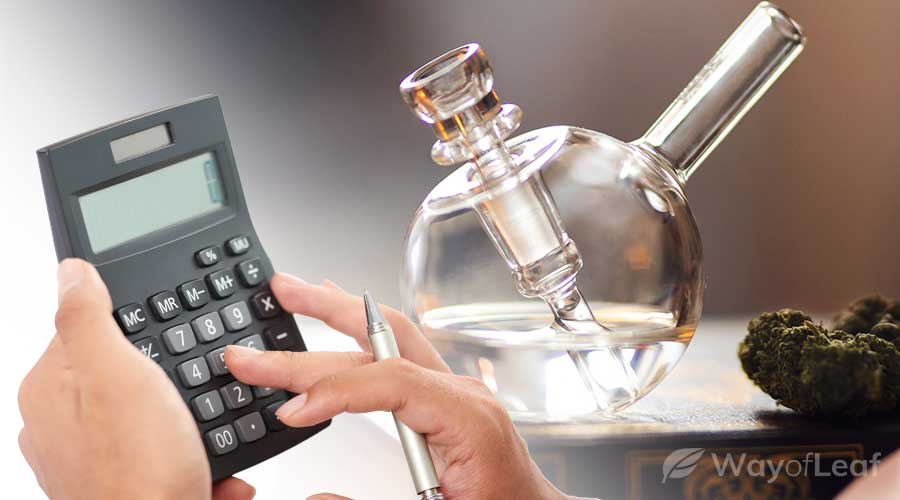 The state of Alaska recently recorded monthly cannabis sales of over $2 million. According to state law, marijuana tax money goes into one of the three funds:

The Golden State will ultimately have more marijuana tax money to collect than any other state. However, its gargantuan size means every cent is needed. The revenue pays for cannabis legalization administration costs. Excess funds go to various programs related to drug use. These include youth programs, academic studies, and economic development.

Here are some of the ways in which California spends its marijuana tax money.

Colorado has earned over $300 million in marijuana tax since January 2014. The cash is used for various purposes. These include keeping after-school programs open, repairing decrepit infrastructure, and educating children on drug use dangers. The Governor’s office says the money helps the following state departments (among others):

In the first nine months of recreational legalization, Illinois earned over $100 million in tax revenue. Initial money pays for administrative costs associated with cannabis legalization. Any remaining money is divided among a general fund and the following:

In the state of Maine, you are allowed possession of up to 2.5 ounces of weed. Adult-use sales only began in October 2020. Economic forecasts suggest the state will earn almost $7 million in tax revenue in the first fiscal year of legalization.

The aim is to split the money evenly between law enforcement training and public health and safety programs. The former involves the formation of a Criminal Justice Academy. It will train the police and help them understand the rules surrounding cannabis.

In Massachusetts, individual municipalities determine how the money gets spent. In Northampton, for example, the money supports the city’s general fund. The city uses this fund to improve roads and sidewalks. It also helps with the development of more crosswalks and on-street parking.

In other locations, the money might fund veteran services, strengthen schools, and improve law enforcement.

In November 2018, Michigan became the tenth state to legalize recreational marijuana. The state hopes to earn up to $229 million a year in tax revenue in the long-term. However, it is unlikely to earn more than half that amount for the next few years.

Details are not finalized and depend on final tax revenue. However, the first $20 million for the first two years will fund research on marijuana use in health care. Up to 35% of the cash could go to schools, 15% to cities and townships that allow recreational marijuana businesses, and 15% to counties. Another 35% should go to the Michigan Transportation Fund for bridge and road repair.

In Nevada, the main concern appears to surround education. It is believed that the marijuana industry could provide the state with over $1 billion of tax revenue by 2024. At present, the state earns little more than $10 million a month.

The money will go into the state’s general fund and support schools and public education. There is also likely to be an investment in the state’s adult-use program. Different regions have varying priorities.

For example, Clark County voted to allocate almost $2 million to regional homelessness organizations. In Las Vegas, the cash helps pay for the monitoring and enforcement of cannabis activity.

Up to 40% of the cash funds public schools. Here is how Oregon plans to spend the rest:

This state legalized marijuana at the beginning of 2018. However, Vermont didn’t formally create a sales legalization bill until October 2020, and retail sales didn’t begin until 2022.

One possible use of the money is to reduce Vermont’s large deficit gap. It also seems likely that up to 30% will go to substance misuse prevention. Expect funding for summer learning and after-school programs in underserved areas.

Washington state has one of the highest tax rates, an incredible 37% on recreational cannabis! The state has spread its income evenly on a variety of notable causes, including, but not limited to, the following:

Although it is unlikely that the income raised from cannabis tax will completely change a state’s economy, it is refreshing to learn that states are planning to use the funding to improve schooling and provide law enforcement with a much-needed cash injection.

Several states are contemplating recreational marijuana legalization simply because it promises to add tens of millions, if not hundreds of millions, of dollars to their treasuries.

Despite America’s reputation as one of the world’s wealthiest nations, there are large areas of urban decay and crippled educational systems that will benefit immensely from funding made possible by the tax from legal marijuana.

21
7 min read
Join The Discussion
TOC
Premium
Your subscription has ended
If you love cannabis and want to support our site, join WayofLeaf Premium today and unlock
Best of all, part of your membership fee will go towards supporting the fight to legalize cannabis.
Sign Up for WoL Premium
Not now
I already have an account
×
Log in to Your Premium Account