The vagaries of marijuana laws in the United States continue to confound. A significant majority of states allow medical marijuana, and over one-third now permit the use of recreational cannabis. However, the substance is still banned by the federal government. Moreover, marijuana is illegal in certain counties within legal states!

Therefore, when you go to a national park in a state where recreational cannabis is legal, don’t assume it is ok to bring your stash. In America, at least, it remains illegal to use marijuana in a national park. Canadian residents have a bit more leeway. Find out more in this article.

A History of National Parks & Marijuana in the United States

There are 63 protected areas identified as National Parks in the United States. These regions comprise over 52 million acres. In 2018, over 84 million people visited national parks.

The U.S. National Park Service (NPS) oversees all national monuments, rivers, and historic sites within national parks. Over 327 million people visited a site managed by the NPS in 2019. The remarkable system actually includes over 400 regions that touch every state – including Guam and Puerto Rico.

Yellowstone was the first national park in the United States, created by President Grant back in 1872. President Wilson created the NPS in 1916, and we know that cannabis wasn’t made illegal federally until 1937. Therefore, it wasn’t always illegal to use marijuana in a national park. But it is now.

By the standards of marijuana laws in the United States, the answer is pretty simple: it is illegal to use cannabis in a national park. This is the case even if the land is in a state where recreational/adult-use marijuana is permitted.

The reason for this is because national parks are federally owned. Therefore, state laws no longer apply. For example while Yosemite National Park is in California, a state that offers legal adult-use cannabis, you’re not allowed to use (or bring) cannabis inside the park. In other words, federal law – not state law – applies inside national parks. 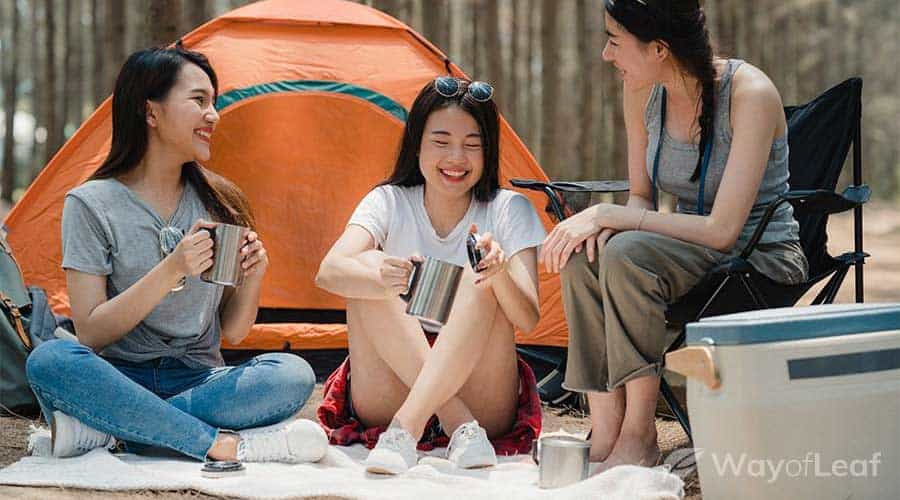 What Happens if You Get Caught with Marijuana in a National Park?

You could get into serious trouble. If you don’t think it happens much, you’re sadly mistaken. Criminal attorneys across the nation handle countless cases of people having been accused of smoking or possessing marijuana inside a national park. Individuals in states such as California and Colorado seem to forget that they can’t bring their marijuana onto federal land.

You’re also more likely to get caught and prosecuted by federal law enforcement than you are by state law enforcement. This is because the federal government has far more resources than state agencies.

The sale or cultivation of cannabis is a felony according to federal law, regardless of the amount. You could face five years in prison and a fine of up to $250,000 if caught selling any amount of cannabis in a national park.

The federal government will check in on you in your home state, and they’ll probably assign a probation officer to you. There’s also a chance that you’ll need to provide further urine samples. If these tests come back positive, you could lose your probation.

Planning to Use Cannabis in a National Park? You Have Been Warned!

Despite the risk, a huge number of people still bring cannabis into national parks every year. Thousands of them are cited for possession. For this reason, we recommend you leave your marijuana at home if you’re planning on visiting a national park.

However, if you do decide to take the risk and break the law, here are a few things to consider:

Another option is to bring CBD products instead. You can use capsules, gummies, oils, topicals, or vape juice. However, it is also worth remembering that cannabidiol is also not federally illegal. While you’re less likely to face arrest, there’s no guarantee that a park ranger won’t ask some awkward questions, at the very least.

What About Canadian National Parks?

Canada created its first national park in 1885. There are now 38 of them, along with a National Urban Park and ten National Park Reserves. The system comprises over 81 million acres and covers 30 of the nation’s 39 natural regions.

Canada legalized cannabis federally in October 2018. Therefore, you can use cannabis in Parks Canada sites, but there are still exceptions. Bear in mind that provincial, territorial, and municipal marijuana legalization apply to the Parks Canada system.

For instance, all non-medical cannabis consumption in the campground must remain within your campsite. Each province has its own laws too. For instance, in parks located in British Columbia, you can’t use marijuana in campground common areas. In Alberta, you can’t use marijuana in the Municipality of Jasper or the Town of Banff. In Yukon, you can only use cannabis in registered Parks Canada campsites.

You can find out more about Parks Canada rules on its official website.

Final Thoughts on Bringing Weed into a National Park

In simple terms, it is illegal to bring cannabis into an American national park. If you are caught in possession or in the act of using it, your stash will get confiscated. Then you’ll face a misdemeanor charge which could result in a prison sentence. Those who are convicted will have a criminal record, something that could come back to haunt them.

In the United States, land controlled by the National Park Service is subject to federal rules. This includes national parks. We recommend leaving your marijuana at home and enjoy the breathtaking scenery without any fear of prosecution. In Canada, cannabis is federally legal, although there are certain rules you have to obey.