Read on to find out more about the health benefits and uses of iodine, sources of iodine, and how much to take.

Iodine Is Essential for the Function of the Thyroid

Iodine plays an essential role in the thyroid gland, which is an organ that produces hormones. Hormones are molecules that travel through the blood and send messages to different parts of the body.

Thyroxine (T3) and triiodothyronine (T4) are two of the essential hormones produced by the thyroid. These hormones regulate the metabolism of cells by controlling how much oxygen and sugar is turned into energy. In turn, this controls other vital functions in the body, such as heart rate and how fast the digestive system breaks down food. 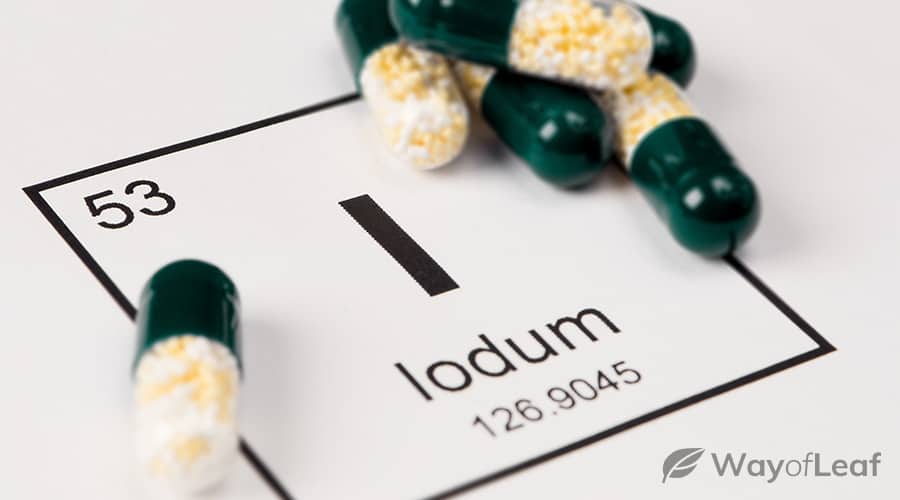 An overactive thyroid can cause hyperthyroidism. It occurs when too many thyroid hormones are produced, causing the body’s metabolism to speed up, leading to symptoms such as weight loss and increased heart rate.

In contrast, hypothyroidism is a disorder caused by an underactive thyroid. Hypothyroidism happens when not enough thyroid hormones are produced, causing the body’s metabolism to slow down, resulting in low energy and weight gain.

T3 and T4 are produced by the body using iodine as the main building block. Controlling the levels of iodine is therefore essential in preventing thyroid disorders.

Here are some of the current uses and other reasons people may choose to take iodine:

Reducing the Risk of Goiter

A goiter happens when the thyroid gland swells up, causing a lump in the neck, which can result in coughing, tight throat, and difficulty swallowing. Goiters can happen for several reasons, but the most common cause is iodine deficiency.

Use as a Disinfectant

Iodine has antimicrobial properties, meaning it can destroy harmful microorganisms and prevent them from causing disease.

Because iodine doesn’t affect wound-healing cells, a solution containing iodine called povidone-iodine is commonly used as an antiseptic in surgery and first-aid for cuts, burns, and abrasions.

During pregnancy, doctors recommend that women increase iodine intake because of the increased production of maternal thyroid hormones.

Evidence has highlighted that insufficient iodine intake during pregnancy is associated with adverse effects on brain development, leading to subsequent cognitive and motor problems in children.

However, research also shows that too much iodine can also be detrimental to maternal health.

Side Effects of Iodine

Although iodine is relatively safe, it can cause side effects that generally occur from taking larger doses.

Reported side effects of iodine include:

Because iodine is found in seafood, too much seafood can sometimes cause iodine-related side effects.

Taking excess iodine over a prolonged period can also result in hyperthyroidism and hypothyroidism (see below).

Iodine deficiency can result in hypothyroidism, as there isn’t enough iodine to make sufficient amounts of T3 and T4.

IDDs can result in hypothyroidism, as there isn’t enough iodine to make sufficient amounts of T3 and T4.

With low iodine levels, the thyroid may swell to a larger size to capture more available iodine to maintain the production of T3 and T4. This swelling causes a goiter.

Because of the role of iodine in producing maternal hormones, side effects of IDD also include pregnancy and birth complications and development problems in newborns.

Side Effects of Too Much Iodine

Excess iodine can lead to excess production of thyroid hormones, resulting in iodine-induced hyperthyroidism, which can, in turn, cause goiter.

In some instances, iodine overdose can also have the opposite effect and cause hypothyroidism. Iodine-induced hypothyroidism happens because excess iodine detected by the body causes the thyroid gland to stop taking up iodine – a phenomenon known as the Wolff-Chaikoff effect.

The amount of iodine required will vary from person to person. However, here are some general guidelines on dosage recommendations for different age groups provided by the National Institute of Health (measured in micrograms/ µg):

Foods rich in iodine include: 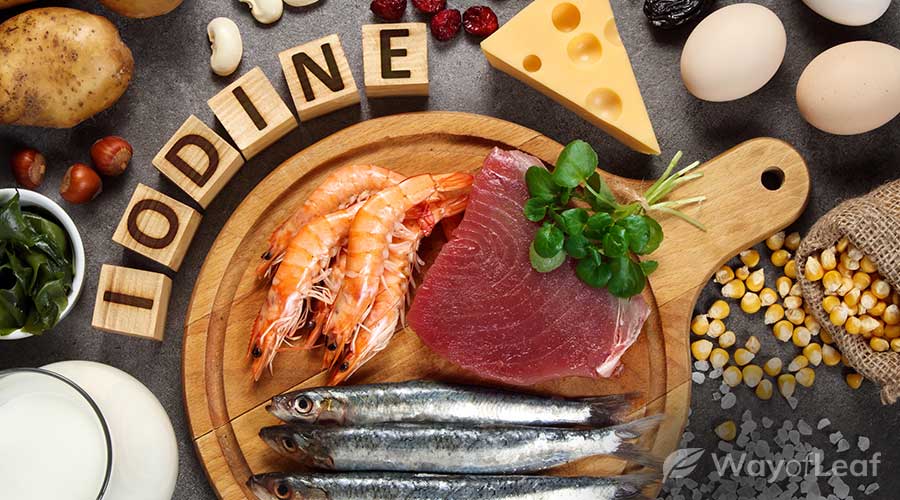 Fruits, vegetables, and grains can also contain iodine. Generally, this is in minimal amounts and depends on the iodine levels of the soil in which they’re grown.

Iodized salt was introduced in the 1920s to help reduce iodine deficiency. In the majority of developed and developing countries, table salt is also a food source of iodine.

To meet the recommended dose (around 150µg per day), most people can get the amount of iodine they require from having a balanced and varied diet.

However, because food sources rich in iodine include milk and fish, dietary choices may mean certain people don’t consume enough iodine through food. Such as:

In these instances, people may consider taking iodine as a dietary supplement. Pregnant women who are required to have over the recommended daily intake dose may also seek iodine supplements.

It’s important to consult with a doctor to determine whether you need iodine supplements and what dosage best suits your need.

Iodine supplements are generally packaged in the form of potassium iodide or sodium iodide. Iodine can also be found in supplements containing kelp (a type of seaweed rich in iodine) or in a multivitamin combined with other nutrients.

Because excess iodine may cause health complications, it’s important to consult with a doctor first to determine whether you need iodine supplements and what dosage best suits your need.

To round off this article, here are some interesting facts about iodine:

1 – Iodine was Discovered in an Attempt to Make Gunpowder

During the Napoleonic Wars, the French chemist Bernard Courtois accidentally discovered iodine in 1811 while manufacturing saltpeter – a key component of gunpowder. This manufacture involved isolating potassium nitrate from wood ash. However, a wood ash shortage prompted him to use seaweed instead. When Courtois attempted to separate potassium nitrate from the seaweed, he noticed a cloud of iodine gas.

2 – Iodine Is Named After the Greek Word for Violet

Iodine was discovered in its vapor form, which is a vivid violet color. As such, iodine was named based on the Greek word “idos,” which translates to violet.

In the UK, the primary source of iodine is cow’s milk. As well as eating iodine through grass farmed on mineral-rich soil, iodine and other minerals are added to the cow’s feed. Therefore, cow’s milk contains a high content of iodine.

4 – Iodine Was Used to Make the First Photographs

The daguerreotype was the first commercially available photographic process discovered in 1839 by the French painter Louis Daguerre. This process involved using liquid iodine as a light-reactive chemical and a copper plate base.

5 – It’s Not Just Humans That Suffer From Iodine Deficiency

As well as humans, many animals also suffer from iodine deficiency, including dogs, horses, and even several different types of birds. Goiters linked to iodine deficiency can be found in sheep, cows, and goats.

Because of its effects on the thyroid, controlling iodine levels is essential in maintaining the health of several different body tissues and organs.

If you suspect you may be experiencing problems linked to iodine deficiency, consult with your doctor about whether to take dietary supplements. Too much iodine could negatively affect the thyroid leading to further health problems.