Humans have used mushrooms as both food and medicine for thousands of years. However, consuming certain species could have dire consequences. There are approximately 100 poisonous mushroom varieties, around 30 of which can be deadly.

Each year, there are thousands of cases of mushroom poisoning in the USA alone. Most people make a full recovery after receiving the appropriate treatment, but others are not so lucky.

Here is our in-depth guide to poisonous fungi and how to stay safe when preparing and eating mushrooms.

The World’s Most Poisonous Mushrooms

Mushroom poisoning is a common occurrence. Every year around 6000 Americans accidentally or intentionally consume toxic mushrooms.

The majority of cases involve children who can unwittingly swallow mushrooms they find growing in gardens, parks, or woodland. A significant number of poisonings also result from misidentification when foraging for edible species.

Most cases are mild and resolve relatively quickly without treatment. Others require supportive or medical care to prevent lasting physiological damage.

Mushroom poisoning can be fatal and has been implicated in the deaths of several historical figures.

In some instances, mushroom poisoning can be fatal. In fact, mushrooms have been implicated in the deaths of several historical figures. Perhaps the most famous example is the assassination of the Roman emperor Claudius.

According to historical reports, his fourth wife carried out his murder by adding a poisonous specimen to his favorite mushroom dish. The exact species is disputed, but most sources suggest that the highly toxic death cap (Amanita phalloides) was the culprit.

Whether Claudius was really a victim of mushroom poisoning or died of natural causes is up for debate. However, the death cap and several other Amanita species are certainly among the most poisonous mushrooms in the world.

Now, let’s delve into the effects of these deadly fungi and some other common poisonous varieties.

What Mushrooms Are Poisonous?

Amanita poisoning progresses through three distinct stages. Within 6–12 hours of consumption, it causes gastrointestinal symptoms, including nausea, vomiting, and diarrhea. These symptoms will improve after 24–36 hours, possibly leading the patient to believe they have recovered. 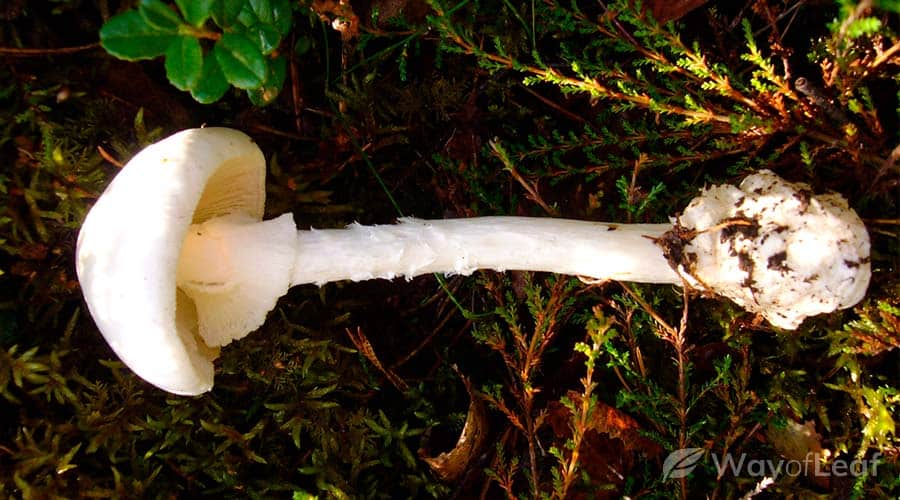 However, after 48 hours, amatoxin’s damaging effects on the liver intensify. At this stage, affected individuals may require a liver transplant, without which death can occur within a week.

Aside from Amanita mushrooms, several other varieties contain amatoxins, including members of the Galerina, Lepiota, and Conocybe families. Some of these fungi are particularly dangerous due to their appearance, which closely resembles certain edible mushrooms.

Two other poisonous mushroom varieties that can easily be mistaken for edible species are Clitocybe and Inocybe. Certain members of these large families contain muscarine, which affects the central nervous system within 30 minutes of consumption. 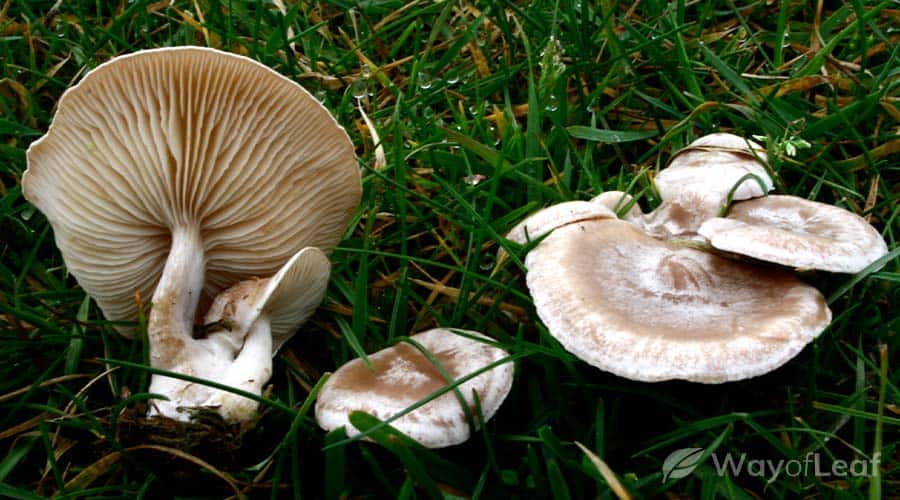 Muscarine can be fatal to humans if they consume too much at once. However, research suggests it would be necessary to eat around 500g of mushrooms for this to occur. That said, just 10–20g of muscarine-containing mushrooms can cause symptoms, including:

Some Inocybe species also contain the hallucinogenic compounds psilocybin and psilocin. Although some people consider these chemicals to be toxic, others believe they have therapeutic potential.

Indeed, research suggests that psilocybin can benefit a range of mental health disorders when taken in a controlled setting.

Several other mushroom types also contain psilocybin, which we will discuss in detail below.

Numerous mushroom species contain the psychoactive compound psilocybin. The most famous of these are members of the genus Psilocybe, colloquially known as magic mushrooms. However, it also occurs in several Gymnopilus and Panaeolus species. 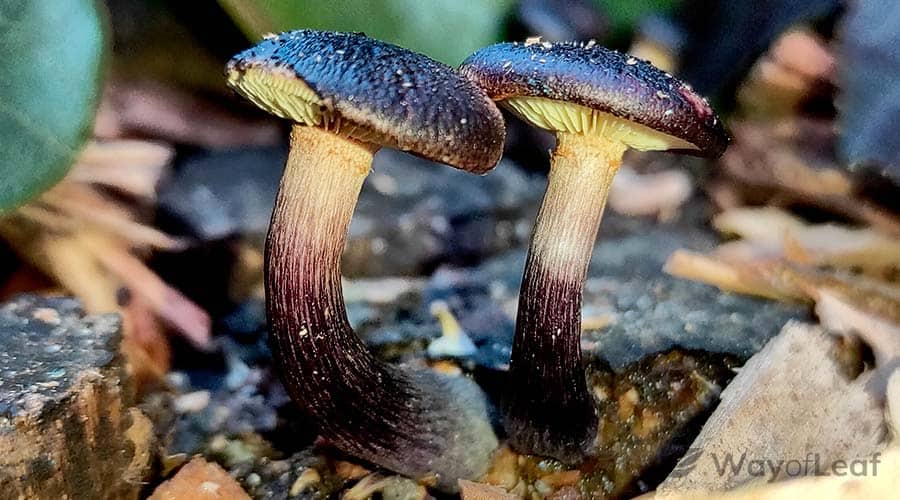 Consuming these mushrooms results in altered mood and perception as psilocybin interacts with serotonin receptors in the brain. The effects usually occur 30 minutes to two hours after ingestion and may include:

Unfortunately, this is a common cause of mushroom poisoning since deadly species, including the funeral bell (Galerina marginata), look similar to some magic mushrooms. 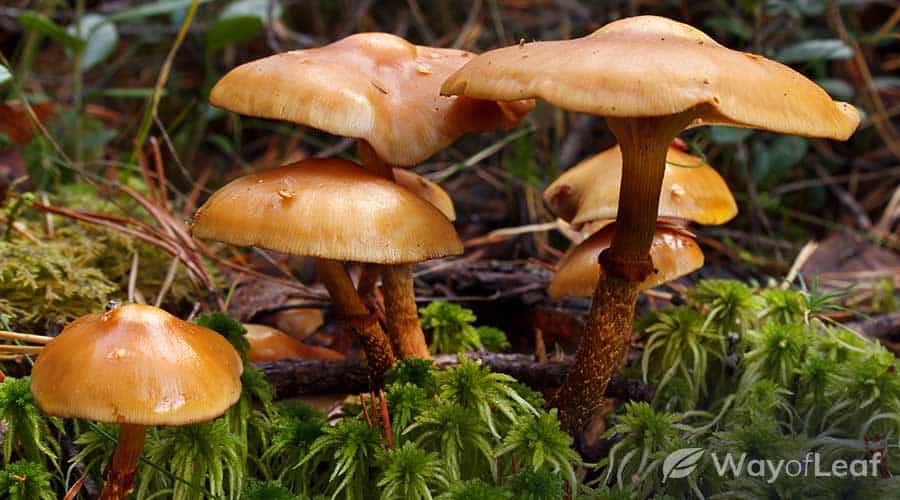 The first signs of toxicity are gastrointestinal complaints, which can occur several days after consuming the mushrooms. Severe kidney damage can then develop over the following 1–2 weeks.

Many patients recover after receiving the appropriate treatment. However, some require ongoing hemodialysis.

Gyromitra is another poisonous mushroom variety that people often consume accidentally. The reason for this is that they look similar to edible morels (Morchella species). The likeness between the two mushrooms has led to Gyromitra mushrooms’ common name – false morels. 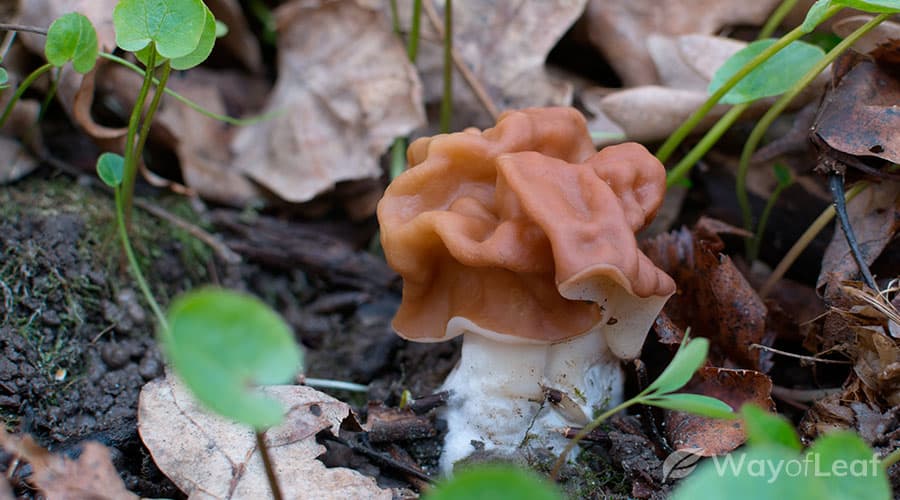 They contain a chemical called gyromitrin, which causes gastrointestinal upsets around five hours after consumption. It can also cause liver and kidney damage in the following days.

Furthermore, gyromitrin breaks down to a metabolite known as monomethylhydrazine. It depletes the body’s reserves of vitamin B6 and the neurotransmitter GABA, causing seizures.

These seizures are often resistant to anticonvulsant medications, and treatment involves supplementing vitamin B6. Most patients recover within approximately six days.

Coprinus atramentarius, also known as the inky cap mushroom, contains a compound called coprine. When it is consumed with alcohol, it causes what is known as a disulfiram-like reaction. 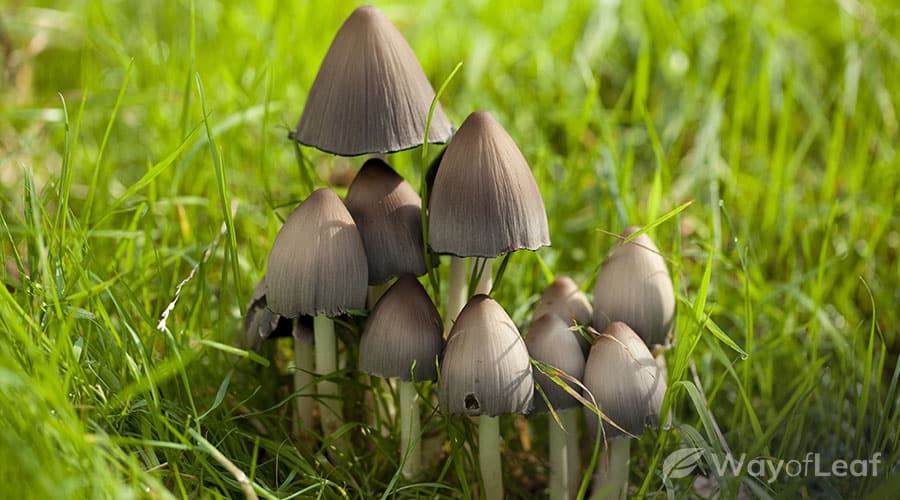 Disulfiram (Antabuse) is a drug that doctors prescribe to treat alcohol dependence. When the two substances are ingested together, they cause a variety of unpleasant symptoms, including:

These symptoms can occur if Coprinus atramentarius is eaten within five days of consuming alcohol.

Some other poisonous mushroom species that people often inadvertently consume include:

Many other mushroom varieties can cause poisoning with symptoms ranging from mild to severe. The most common effects are abdominal cramps, nausea, vomiting, and diarrhea, occurring 1–3 hours after consumption.

Although these symptoms usually resolve relatively quickly, affected individuals should still seek medical attention to ensure no permanent damage occurs. It is also essential to consume plenty of fluids, preferably with added electrolytes, to avoid dehydration.

What About Poisonous Spores?

Fungi reproduce by releasing miniscule spores into the air, and it is possible to breathe them in unintentionally. While mushrooms do not often produce deadly spores, those from other fungi like molds can be harmful.

Mold is a common occurrence in damp or water-damaged homes. One of the most widespread varieties is black mold (Stachybotrys chartarum). The spores that these fungi produce contain chemicals called mycotoxins that can act as allergens and irritants.

They cause various symptoms when inhaled, including:

Some molds that grow on food can also be dangerous. For example, Aspergillus molds often infect crops such as maize, peanuts, and tree nuts. They produce chemicals called aflatoxins, which have been linked with an increased risk of cancer.

There are several rules for staying safe when consuming mushrooms. However, the most crucial of these is never eating a mushroom unless 100% sure about its identification. Many mycologists recommend, “if in doubt, throw it out,” and this is an essential guideline to follow.

Before harvesting wild mushrooms, learn as much as possible about local edible species and their look-alikes. Training with a professional mycologist is best, although a reliable guidebook is also crucial.

During identification, pay attention to every part of the mushroom, noting its cap and stem’s color, size, and texture. Checking whether mushrooms have a ring on their stem or a volva (swollen base) is another way to distinguish between some edible and poisonous species. Taking a spore print is also advisable as different mushroom species tend to have different color spores.

Poisonous and edible mushrooms can grow side by side, so be sure to identify every specimen correctly.

Sometimes, poisonous and edible mushrooms can grow side by side, so be sure to identify every specimen correctly. Store them well before preparation to avoid spoilage, and cook thoroughly before eating.

Even some edible mushrooms can cause adverse reactions in certain people, especially if they are not appropriately prepared. Therefore, it is vital to exercise caution when eating any mushroom for the first time. Have a small amount first and then wait several days before consuming more.

It is also recommended to save a small sample of any mushrooms that are ingested. Doing so will allow for quick identification if poisoning occurs, meaning that affected individuals receive prompt treatment.

The University of Kentucky College of Food, Agriculture, and Environment has produced an excellent guide to collecting mushrooms safely. We strongly recommend reading this and as much other relevant literature as possible before picking any mushrooms in the wild.

It is not always easy to distinguish toxic mushrooms from edible ones. Therefore, mushroom poisoning is a genuine danger. In many cases, the symptoms are mild but, sometimes, it can be deadly.

The best way to stay safe is to avoid eating mushrooms if their identity is uncertain. Even when the species is known, individuals should take precautions to reduce the risk of adverse reactions.

If in any doubt, stick to store-bought varieties such as white mushrooms, oyster mushrooms, and shiitake. Home cultivation is also becoming a popular pastime for those craving something a little more exotic, and numerous grow kits are available online for this purpose.

Want to learn more about growing mushrooms safely at home? Check out our guides below: