Written by Tiannah Pedler, M.A.
7 min read
0 comments
Read Later
This article may contain links to some of our affiliate partners. These are brands we trust and brands we feel represent the highest quality standards. When clicking links, we may earn commissions to help support our site. Learn more by reading our full disclaimer.

Four Sigmatic is a brand that specializes in superfoods. By its own explanation, Four Sigmatic foods are considered the most nutritious and healthy, which is where this brand gets its name. In particular, this company focuses on mushrooms.

This Four Sigmatic review seeks to inspect the brand in further detail. Although it’s a company that has made a name for itself, some customers are unsure whether to take the plunge and order these products for themselves. Stick around to learn whether Four Sigmatic is the right brand for you.

Who Are Four Sigmatic?

Four Sigmatic was founded by Tero, a Finnish man who grew up on a family farm in his home country. His grandparents brewed a coffee replacement there in World War II, using only the mushrooms available to them. The Finnish love for nature and a healthy lifestyle is present in everything this brand does.

This is a brand that has family values at its center. The website is amicable and fun; while it might seem gimmicky to some, it indeed appeared genuine to us. Tero works hard to bring the best ingredients and his generations-old family traditions to the world.

When it comes to finding a brand that’s sustainable, informative, and high-quality, Four Sigmatic is a really tough one to beat.

The website is also very informative. There are tabs for learning about mushrooms’ health power, the team behind this company, and more. The ‘Sustainability’ tab reveals that Four Sigmatic is partnered with tentree, planting 40,000 trees to become climate+ in the future. For those who are unfamiliar, climate+ means going beyond carbon neutral to reduce the amount of carbon dioxide in the atmosphere. It’s an incredible commitment.

Four Sigmatic sources mushrooms from the best farms worldwide but states that it’s always searching for the most local options. All packaging is eco-friendly and recyclable, which is also fantastic news.

By the way, all of the products are also 3rd-party tested for quality assurance. When it comes to finding a brand that’s sustainable, informative, and high-quality, Four Sigmatic is a really tough one to beat.

When reading Four Sigmatic reviews online, you’ll immediately notice the overwhelming love for this brand. It appears that there are very few bad words to say about Four Sigmatic, with most online reviews concluding that these products are very much worth it.

On Amazon, 70% of the reviews are five-star. The negative ones seem to relate to people’s personal tastes regarding the drink’s flavor; that said, many of the positive reviews applaud its flavor. Some negative reviews also cite the price of the products.

In general, it seems that Four Sigmatic has a lot of fans. On sites that specifically review superfoods and mushroom supplements, Four Sigmatic has tons of positive reviews. It appears to be really popular among the mushroom-using community.

The mushroom superfood products from Four Sigmatic are all plant-based and vegan. You can use them no matter your dietary preferences. Plus, the brand has a USDA organic certification, which is always great news.

The range includes lots of innovative products, which we review in detail below.

The Four Sigmatic flagship product is its coffee. The coffee grounds are made from mushrooms, which is what makes them so unique. The theory behind this product is that superfood mushroom coffee can provide energy without the jitters.

The bags of ground coffee cost about $20, whereas the boxes of 24 coffee pods cost $36. There are also sachets of instant coffee, priced at $15 for ten.

Mushrooms can offer a great source of plant-based vegan protein. The Four Sigmatic mushroom protein products fall under the Repair category since they can help repair the muscles after strenuous exercise.

Four Sigmatic offers three flavors: Creamy Cacao, Sweet Vanilla, and Peanut Butter. Each can of protein powder contains 15 servings, with each one packing 18g of vegan protein. The product has a complete blend of amino acids, highly sought-after in vegan protein supplements. 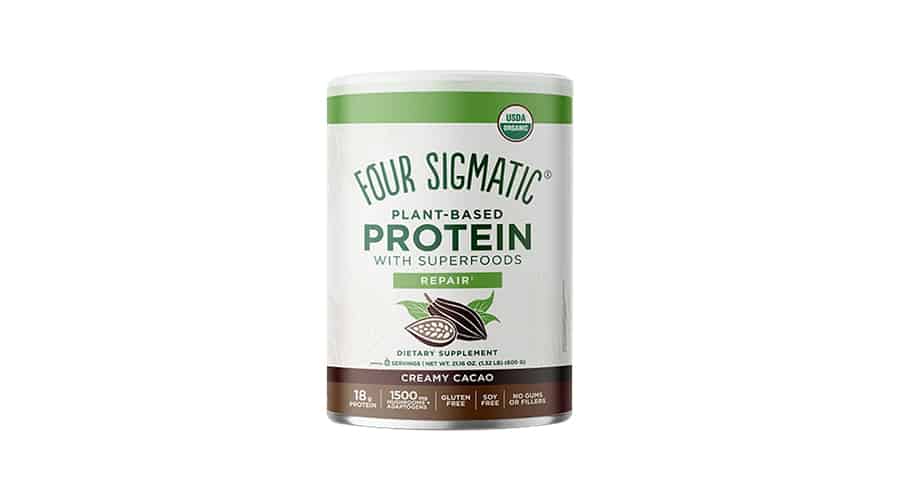 Four Sigmatic is upfront about the 2g of added sugar, which is also good to see. This is a minimal amount, so it’s not likely to affect the user negatively.

The $50 protein tubs are pretty expensive compared to other options on the market. However, they have a creamy texture and a pretty amazing taste, so it depends on whether you’re willing to pay for flavor. Meanwhile, the unflavored option is not all that tasty – it’s up to you whether this is to your liking, but it’s handy for adding to smoothies.

The mushroom blend products from Four Sigmatic are designed to be added to smoothies and soups. The flavor is peculiar alone, but it’s easy to disguise the bitter mushroom taste within other culinary delights.

There are three options: Defend Blend, Focus Blend, and Adaptogen Blend. There is also an option to get a sample box with a small bottle of all three blends. 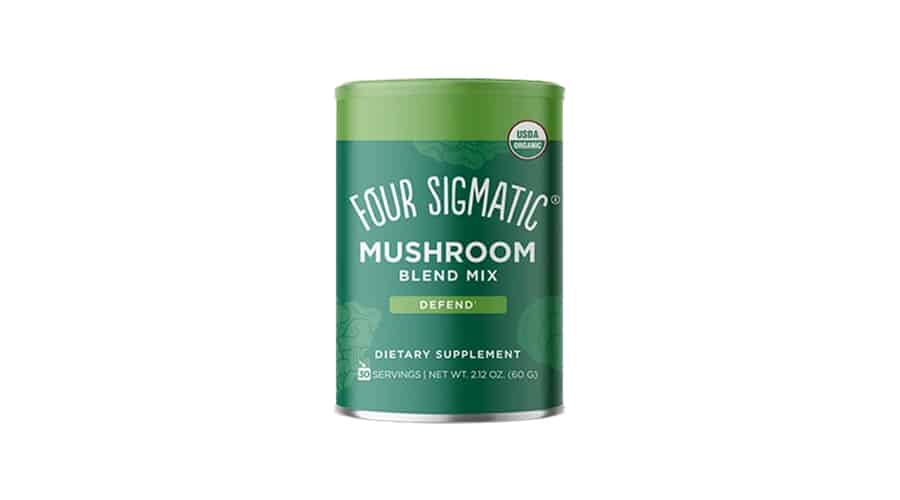 The Focus Blend is packed with lion’s mane and rhodiola, designed to promote energy and productivity. It also features B12 and blueberry for antioxidant properties. Meanwhile, the adaptogen blend contains 1500mg of adaptogenic mushrooms, which certainly packs a punch with every scoop.

A can of mushroom blend costs $30.

Similar to some of the other products is the cacao mix. Four Sigmatic recommends using this in the evening as part of a wind-down; think of it as a mushroom-infused hot chocolate. The relaxant properties of reishi mushrooms are combined with the sweet taste of chocolate to make a mushroom hot cacao mix.

You can mix this cacao powder with water or milk (Four Sigmatic recommends a non-dairy option). Either way, this is definitely not the best-tasting hot cocoa you can get. After all, it contains mushrooms! That said, it’s effective as a wind-down beverage, which is perhaps better than sugar-loaded hot cocoa.

There is also a mushroom cacao mix with cordyceps mushrooms, which is energizing. This is the option to choose if you fancy a hot morning beverage that tastes like a dessert.

The cacao in these drinks is organic and unprocessed, which is another excellent touch. A box of 10 sachets costs $20.

Alongside the other coffee options are the mushroom latte products. These sachets of instant lattes are much creamier and more delicious than the other mushroom coffee powders. There are three options: Chai Latte, Matcha Latte, and Golden Latte. The chai option contains reishi and turkey tails, whereas the matcha latte contains lion’s mane.

The Golden Latte with Turkey Tail is one of the most delicious; Four Sigmatic recently improved the formula. For those who don’t know, a golden latte contains turmeric, another superfood adaptogen. As a result, this is a latte packed with wholesome goodness, and it’s our recommendation for people who want to get into adaptogen coffees. 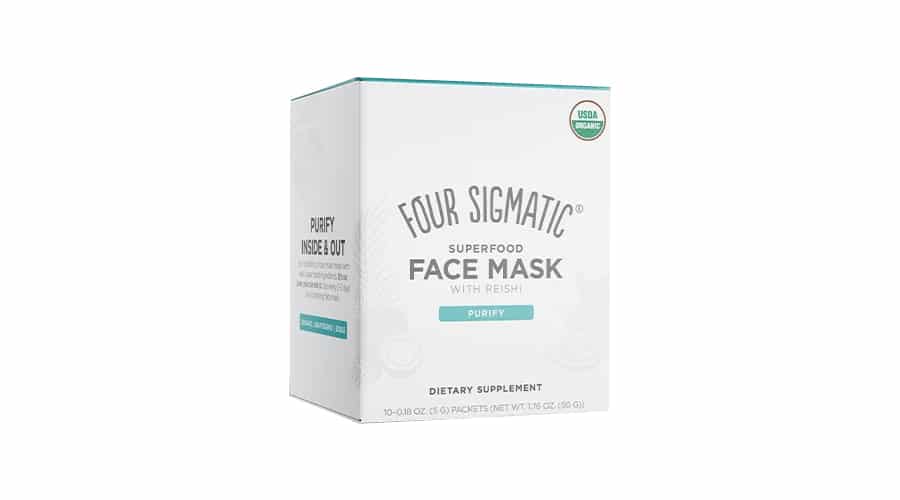 The superfood skincare range from Four Sigmatic is quite comprehensive. The collection features a Superfood Serum, Superfood Face Mask, and Superfood Body Butter. Prices start at $40 and go up to $121.50 for a bundle of all three products.

The products are so great that they even feature on beauty websites like Cult Beauty. The serum, in particular, is fantastic for achieving a healthy glow. Since the skin can absorb nutrients, these superfood skincare products could be the way forward in the beauty industry.

By the way, Four Sigmatic’s beauty products are edible, which is a unique twist.

Four Sigmatic offers three flavors of adaptogen shot. Each product comes with six shots. The shots contain an adaptogen blend to suit the task at hand, featuring various mushrooms alongside natural flavoring agents. The shots are gluten-free and vegan friendly, with just 1g of sugar each.

Four Sigmatic offers lots of bundles. The various bundles feature almost every type of product you can think of, including the Ultimate Smoothie Kit, Intro Elevated Routine, and more.

For those who have no idea where to begin, there is a mushroom starter kit in the form of the Full Day Routine bundle. It contains coffee, protein, and cacao mix to get you through a full day of adaptogens. The kit costs $170, working out at $5.50 per day.

Finally, Four Sigmatic offers a mushroom elixir. There are four types based on the mushroom species contained within. The benefit of the elixir is that you can incorporate it into your day however you desire. Dissolve it in water, add to a smoothie, or stir into a tea or coffee.

The options are Lion’s Mane, Chaga, Reishi, and Cordyceps. Each one provides slightly different effects, so make sure to read the product descriptions. A box costs $38.

You can purchase the mushroom supplements from Four Sigmatic from the brand’s official website. All orders are typically processed within 24-48 hours, and there is free shipping on all US orders over $100. Under that price, shipping is a flat rate of $4.95.

All orders are typically processed within 24-48 hours, and there is free shipping on all US orders over $100.

Customers can also purchase the products from several third-party websites, but you can’t make use of the return policy when buying elsewhere. The official site has a money-back guarantee for up to 120 days after purchase.

Four Sigmatic is an excellent brand for those looking to buy mushrooms. This Four Sigmatic review has delved deep into the products and found that they stand out from the rest of the market for their quality and transparency.

It’s worth noting that the consumable products might not be to everyone’s tastes. In terms of health benefits, though, it’s pretty much impossible to fault this brand.