The cordyceps mushroom has been a staple of Chinese medicine for millennia. Usage of these fungi is increasing as its proponents cite a host of possible health benefits. There are approximately 400 different cordyceps species. However, two specific species are now the focus of detailed research: Cordyceps sinensis and Cordyceps militaris.

In this article, we look at what cordyceps mushrooms are, along with their purported benefits. We also include information on popular cordyceps supplements and possible side effects.

What Are Cordyceps Mushrooms?

The cordyceps fungus grows like a parasite from the brains of spiders and insects. Each cordyceps species infects a specific bug. It begins with cordyceps spores landing on the victim. These spores germinate, and hyphae, tiny filaments that resemble thread, start growing inside the insect.

The spores turn into mycelium, which attacks the insect from the inside. Once the insect is consumed fully, and the conditions are right, a mushroom grows from the insect’s head. 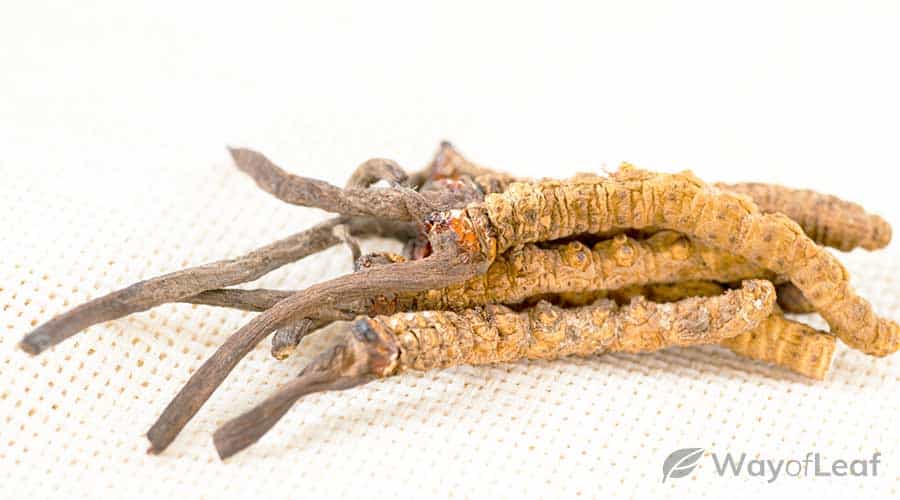 Cordyceps sinensis is the best-known medicinal species. This particular mushroom has a brown or orange-brown color and is shaped like a finger. Wild cordyceps are extremely rare, and one kilogram can cost around $20,000. Purchasing such a supplement is an expensive process! As a result, most of the supplements on sale contain lab-grown cordyceps.

While the formation of cordyceps sounds horrifying, the fungus may have an enormous array of benefits. At present, much of the research involves animal or lab studies. As a result, scientists are unable to ascertain the efficacy of the fungi on humans. Nonetheless, there is a long history of medical use in Chinese and Tibetan medicine.

Those interested in sourcing fresh cordyceps must be prepared to travel. The mushroom is native to Vietnam, Thailand, China, Nepal, Bhutan, Korea, Bolivia, Peru, and a handful of other locations.

Like most mushroom species, clinical research is lacking regarding the potential health benefits of cordyceps. That said, several data-based reports have been published to date, citing a variety of potential uses for the fungi.

Several data-based reports have been published to date, citing a variety of potential uses for cordyceps.

For example, a study published in the Journal of Alternative and Complementary Medicine cites a potential link between cordyceps and improved athletic performance. Adults between the ages of 50-75 were given a daily cordyceps supplement, and researchers noted an “improvement in exercise performance [that may] contribute to wellness in healthy older subjects.”

Here are some additional potential health benefits of cordyceps based on research evidence.

An overview of studies published in The Cochrane Database of Systematic Reviews in 2014 involved observing more than 1,700 patients with chronic kidney disease. The researchers noted that those who consumed cordyceps supplements showed tangible improvements in kidney function. However, the authors also conceded that “definitive conclusions could not be made because of the low quality of evidence.”

A study published in the International Journal of Molecular Medicine in 2015 looked at how cordyceps affected fruit flies. The researchers found that it prolonged the lifespan of the flies by reducing oxidative stress.

A Chinese study published in 2011 found that cordyceps reduced triglyceride levels in hamsters and rats. Triglycerides are a form of fat in the blood, and high levels are often linked with an increased risk of heart disease. On a side note, cordyceps mushrooms are approved in China to treat arrhythmia, which is a condition involving irregular heartbeat.

A study published in Experimental Biology and Medicine in 2009 looked at cordyceps’ effects on leukopenia; a common side effect of cancer therapy involving sub-optimal white blood cell count. Researchers found that cordyceps reversed the condition in mice, stating the fungus “demonstrates potential [to act as] a remedy for leukopenia after cancer therapy.”

A study published in Oriental Pharmacy and Experimental Medicine in 2015 suggested that cordyceps has “modulatory effects on the inflammatory system,” and as a result, could prove useful as an “anti-inflammatory dietary supplement or drug.”

Again, however, it is important to remind readers that research on the benefits of cordyceps – particularly in human subjects – is still ongoing. More data will need to be collected in the coming years for health professionals to better understand the full range of therapeutic benefits that cordyceps mushrooms offer.

Most cordyceps supplements contain extract from fungus that has been grown in a controlled setting. Authentic raw cordyceps harvested from the wild are extremely expensive and are thus cost-prohibitive in most instances.

More and more options for cordyceps supplements are popping up for sale online, though consumers will be wise to exercise caution before making a purchase. Try and find a brand or label that conducts third-party lab tests, as this will verify the presence of actual cordyceps extract in the supplement. 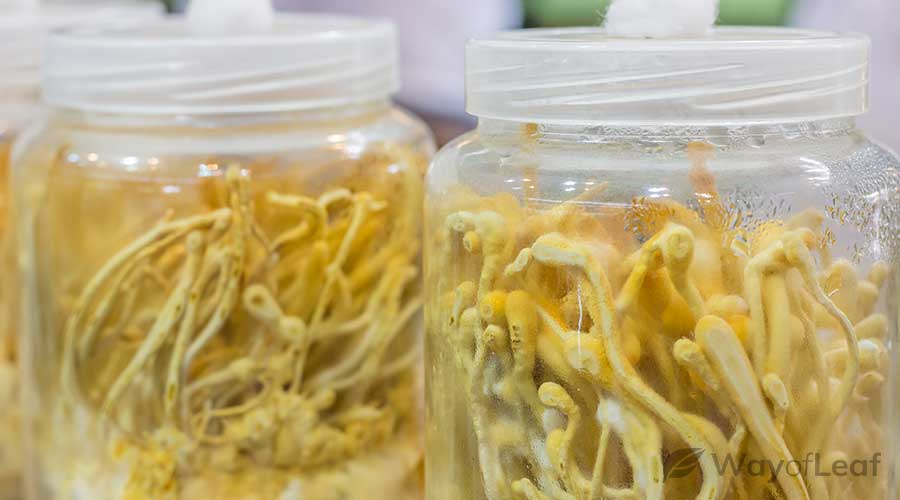 Effective dosing can depend on a variety of factors, including the age, weight, diet, and general health condition of the user. There isn’t enough scientific evidence available to outline specific dosages.

In terms of adverse reactions, there have been reports of mild side effects, including dry mouth, nausea, and stomach discomfort. As always, it is recommended to consult with a doctor before consuming cordyceps, especially for users currently taking prescription or over-the-counter medications.

For those that want to purchase cordyceps supplements, here are a few additional options.

Making cordyceps tea involves chopping the mushroom into small pieces and boiling approximately one tablespoon with ~8 ounces of water. Allow the mushroom pieces to simmer on low heat for 10-15 minutes, then strain and let cool before drinking.

Again, however, this will involve purchasing (or finding) authentic raw cordyceps, which is not practical in most instances.

Cordyceps powders are also becoming increasingly popular and are very convenient as they can be added directly to tea, coffee, hot water, or even smoothies.

Probably the most popular form of cordyceps supplements is capsules. Capsules represent a convenient and fast way of consuming the fungi, and users need not worry about the taste.

Capsules represent a convenient and fast way of consuming cordyceps, and users need not worry about the taste.

Again, potential customers will want to look for cordyceps capsules that have been laboratory verified to contain the same amount of cordyceps extract listed on the label. Another option is cordyceps tinctures, which use double extraction to remove polysaccharides and other compounds from the dried fungus.

Although initial research studies are promising, the jury is still out on cordyceps mushroom benefits. The vast majority of publications to date involve lab rats or mice, and much of the available research is questionable. Hopefully, however, the growing popularity of the fungus will lead to more reliable investigations in the coming years.

If you want to purchase cordyceps, take a look at some top-rated brands below.

To learn more about the benefits of mushrooms, check out our in-depth guides: