The benefits of mushrooms are becoming increasingly well-known. Not only are certain species delicious to eat, but many also have therapeutic properties. One such medicinal mushroom is chaga, which has been a popular folk remedy for centuries.

Here is our complete guide to the chaga mushroom, its benefits, uses, and side effects.

What Are Chaga Mushrooms?

Chaga (Inonotus obliquus) is a parasitic fungal species that primarily grows on birch trees. However, referring to chaga as a mushroom is actually slightly misleading.

Mushrooms are the fruiting bodies of a fungus. They allow the organism to reproduce by releasing spores into the surrounding area. While Inonotus obliquus does produce mushrooms, it is rare to see them. The part of the fungus that humans typically use is a sterile conk or sclerotium. It is a nutrient-dense mass of mycelium, the part of the fungus that is usually concealed inside the tree. 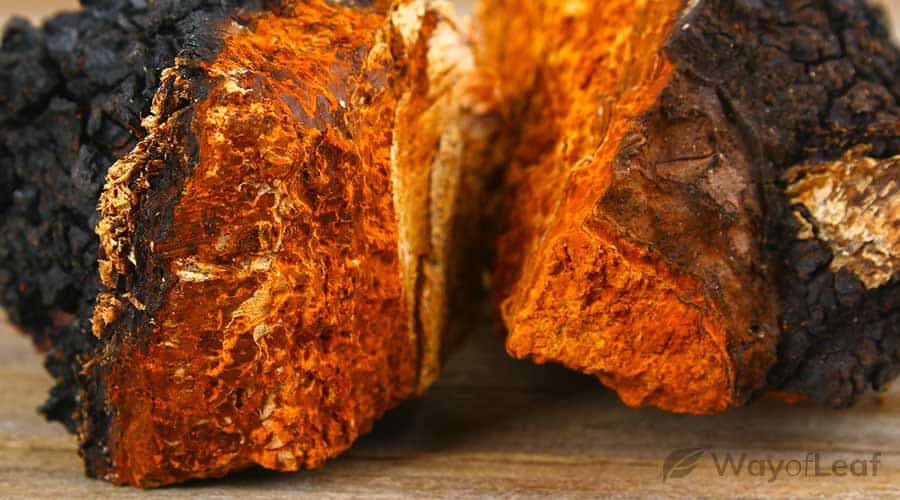 This conk contains high levels of a pigment called melanin. It gives it a blackened appearance, similar to charred wood. Chaga’s coloring has led to its alternative name, clinker polypore, a clinker being a lump of burnt coal. It is also sometimes known as tinder conk, and it is an effective material for starting fires.

However, chaga is probably best-known for its medicinal properties. It is an important component of Eastern European and Siberian folk medicine.

Chaga is an important component of Eastern European and Siberian folk medicine.

Its precise uses vary depending upon the region. For example, the West-Siberian Khanty people primarily use it for stomach ailments. Meanwhile, the North-Scandinavian Skolt Sami use it to treat colds and flu.

Another common traditional chaga use is as an anti-cancer treatment. According to legend, the 12th century Kyiv prince, Vladimir Monomakh, successfully cured a tumor on his lip by drinking chaga tea. Furthermore, the Norwegian term for the fungus is kreftkjuke, meaning “cancer polypore.”

So, is there any science to support these ideas? Here is some of the current research on chaga and its benefits.

Unfortunately, there is little clinical research regarding chaga’s benefits in human subjects. However, laboratory studies suggest it could have some use. Chaga contains various bioactive compounds, including:

These chemicals give chaga a range of potential therapeutic effects, which we will discuss in detail below.

According to a 2018 study, the health benefits of chaga may include:

The study’s authors suggest that chaga extracts could also have cytotoxic (cell-damaging) effects against cancerous cells. They primarily attribute these properties to inotodiol, betulin, and betulinic acid.

A 2016 animal study also focused on chaga’s anti-cancer effects. The researchers pretreated mice with chaga extract for three weeks before infecting them with cancerous cells. They found that the chaga extract reduced tumor size by up to 60% in tumor-bearing mice. They also reported that the mice whose cancer had metastasized (spread) to the lungs had 25% fewer nodules.

This study had an additional interesting finding, which involved the animals’ body weight. The researchers noted that chaga extract reduced body-weight in older, but not younger, adult mice. They suggest that this effect may be due to chaga promoting the breakdown of fats that accumulated as the animals aged.

The results of these initial studies are promising. However, far more research is necessary to determine whether these effects translate to humans.

Little information is available on chaga mushroom side effects. However, according to the Memorial Sloan Kettering Cancer Center, long-term use could result in kidney damage. Therefore, people with pre-existing kidney disease should not use chaga supplements.

Furthermore, the fungus could interact with several types of medication, including anticoagulants, antiplatelet drugs, and anti-diabetic medicines.

Finally, chaga contains chemicals called oxalates, which interfere with nutrient absorption. They may also be toxic in high doses.

Therefore, anyone considering taking chaga should consult a medical professional first. Moreover, it is essential to note that this natural remedy is not a substitute for standard care. Individuals should continue taking any prescribed medication unless their physician advises them to stop.

There are several chaga mushroom supplement options. The most common of these are tea, powders, and capsules. 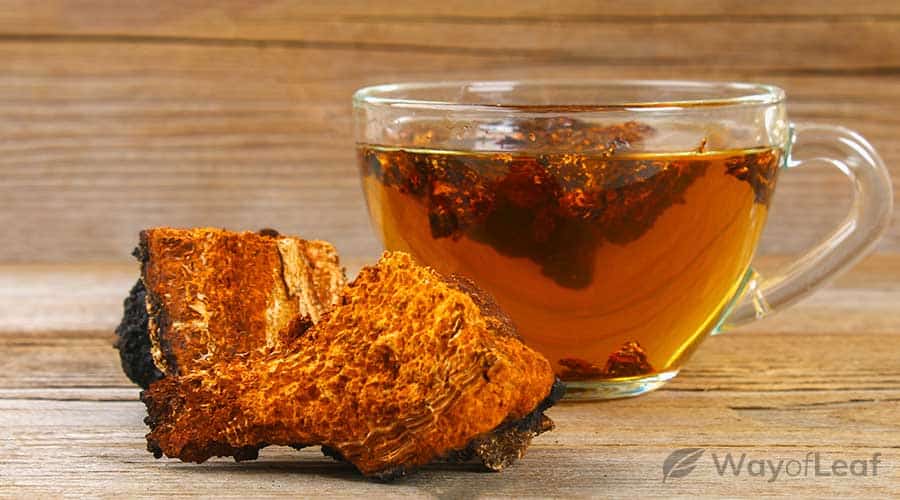 Chaga tea is the most traditional consumption method. Brewing in hot water extracts the fungus’ active compounds and allows the body to absorb them with ease.

The Khanty method involves cutting the chaga into 5–10g pieces and boiling them for 15 minutes before filtering.

Brewing in hot water extracts the fungus’ active compounds and allows the body to absorb them with ease.

Another approach is to soak the pieces in water for 30 minutes and then heat (but not boil) them in water for another 30 minutes. It is possible to use the same pieces of chaga to brew up to three batches of tea.

Consumers of this tea have described its flavor as bitter and earthy. Some suggest sweetening it with a small amount of honey.

Another option is chaga powder. Consumers can mix it into food or beverages, such as smoothies or hot chocolate. It removes much of the hassle associated with brewing tea for a more convenient consumption method. However, some people may find the taste unpleasant.

Finally, chaga mushroom capsules are also available. They provide a straightforward way to take the supplement – simply swallow with water. They also allow for accurate dosing as each capsule contains a fixed amount of chaga.

Although there is insufficient research to support its use in humans, chaga supplements are becoming increasingly popular.

There are many purported chaga mushroom benefits. Its traditional uses include treating stomach ailments, respiratory infections, and cancer. However, until more evidence emerges, we cannot know for sure how well it works.

Due to the current lack of knowledge, we recommend that anyone interested in taking chaga consults a physician or qualified herbalist first.

Learn more about how mushrooms could benefit immune health by following the link below: