Mushrooms come in a vast array of shapes, sizes, and colors. Their diversity has intrigued and inspired humankind for thousands of years.

While some species are rather plain, others have an appearance that arouses a sense of magic, mystery, and wonder. But what about blue mushrooms? Are they real or just the stuff of legends?

Lactarius indigo, the indigo milk cap, may look fantastical, but it is undeniably real. Moreover, this incredible-looking mushroom is considered a choice edible in some parts of the world.

Here is our complete guide to this majestic mushroom species.

Many others stain blue when cut or damaged, including the bluing bolete (Gyroporus cyanescens) and several Psilocybe species. 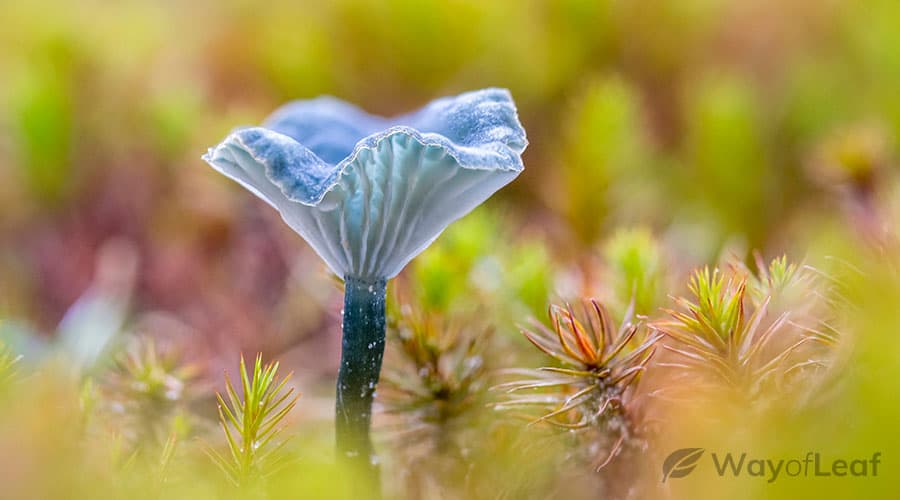 However, few are as distinctive as Lactarius indigo, the indigo milk cap. This mushroom is not only beautiful but is also a delicious and nutritious food source.

Let’s take a closer look at this unique mushroom and what makes it so special.

What Is Special About Lactarius Indigo?

There are many Lactarius species, but L. indigo stands out because of its vivid coloring.

Its cap and stipe (stem) are silvery-blue, a hue that we rarely see in nature. Furthermore, as the mushroom grows, its cap becomes convex, giving it a trumpet-like appearance and revealing its dark, indigo-blue gills.

When Lactarius mushrooms are damaged, they exude a milky, latex-like substance, hence their common name; milk caps. L. indigo is unusual as it “bleeds” blue, although the substance turns greenish when exposed to air.

The mushroom gets its distinctive coloring from a chemical called azulene. Interestingly, scientists have used this compound to develop fluorescent dyes to stain cells during experiments.

Lactarius indigo is a mycorrhizal fungus, meaning that it forms symbiotic relationships with trees.

The indigo milk cap also has several benefits in its natural habitat. The mushroom grows on forest floors, especially among oak and pine trees. It is a mycorrhizal fungus, meaning that it forms symbiotic relationships with trees.

It colonizes the trees’ roots, making it easier for them to take up water and nutrients from the soil. In return, the trees share their nutrients with the fungus. This partnership plays a vital role in our planet’s ecology.

Many humans also rely on the mushroom as a food source. It is considered a delicacy and is especially popular in Central America, where it grows in abundance.

Research has shown that it is among the top three edible mushrooms of cultural significance in Mexico. It received this accolade based on its prevalence, taste, economic significance, health implications, and more.

It is also a valuable source of nutrition, as we will discuss in detail below.

The indigo milk cap is rich in dietary fiber, protein, and fatty acids. Meanwhile, it is low-fat and low-calorie, making it a fantastic option for health-conscious consumers.

Many people consider it an excellent edible fungus with a flavor similar to portabella mushrooms. However, its texture is described as crumbly and grainy, which may take some getting used to.

To prepare the mushrooms, wipe them with a damp cloth to remove any dirt and cut them into even-sized pieces. They taste great simply sauteed in a little butter, but many people enjoy mixing them into scrambled eggs. They turn the eggs a vibrant shade of green!

It is also possible to dehydrate the caps and store them for later use. Ensure they are thoroughly dried out before storing them to prevent mold.

The indigo milk cap mushroom is relatively easy to identify. However, it does have a few look-alikes, some of which are poisonous.

The list includes some other Lactarius species, which have a similar shape to L. indigo and also bleed when damaged. However, L. indigo is the only blue milk cap, making misidentification quite unlikely.

Other possible confusion species include the wood blewit (Clitocybe nuda). It grows in similar conditions to L. indigo, although the wood blewit is really more purple than blue. It is also edible, meaning that getting the two mixed up is not usually dangerous. 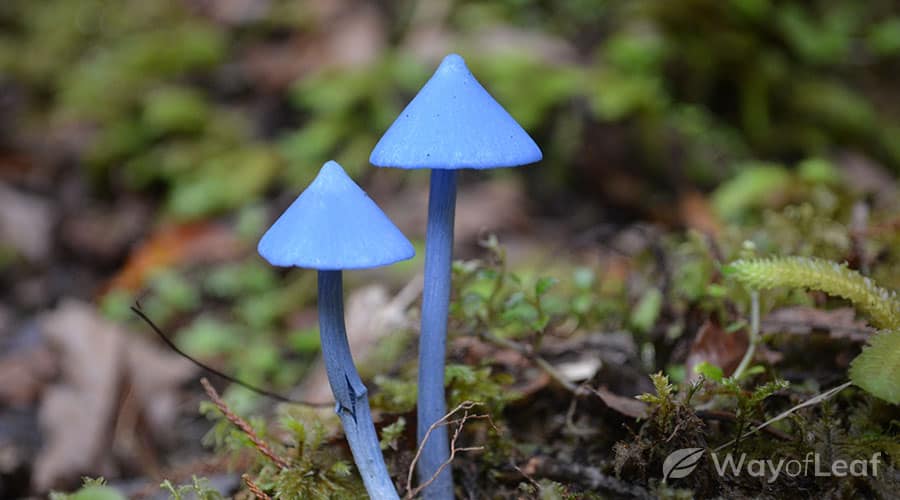 However, some other purple mushrooms are poisonous, including several members of the genus Cortinarius.

One way to distinguish between these mushrooms is to take a spore print. Cortinarius produce rusty brown spores, while wood blewit spores are tan to buff, and indigo milk cap spores are cream.

The best advice is never to eat any fungus unless you are 100% sure about its identification. Even then, it is recommended to cook all mushrooms well and try a small amount first to ensure they do not cause a reaction.

The indigo milk cap is one of many blue mushrooms. However, it is arguably one of the most ecologically and culturally significant.

This fantastic fungus helps to maintain the health of our forests and is also beneficial to humans.

It helps to maintain the health of our forests and is also beneficial to humans. Alongside its impressive nutritional profile, it could have antimicrobial properties too.

So, if you are lucky enough to spot some of these blue fungi, be sure to take a moment to appreciate them. They truly are one of nature’s most outstanding creations.

Why do magic mushrooms turn blue? We unravel the mystery in the article below: