The benefits of mushrooms are becoming increasingly well known. They are nutritionally dense, and some varieties have potent medicinal properties. However, the fact remains that some species are deadly poisonous, both to humans and other animals like dogs.

This is a significant problem since dogs may accidentally consume toxic mushrooms they find growing in the wild. While some types will only cause temporary symptoms such as digestive upsets, others could prove lethal.

Are mushrooms toxic to dogs? The simple answer is that it depends on the type.

Mushrooms can be classified as edible, medicinal, or poisonous. Edible mushrooms include varieties like white mushrooms, oyster mushrooms, and shiitake. These are some of the most widely cultivated species and are often found on supermarket shelves. Some wild mushrooms are also edible, although it is essential to identify them correctly.

Dogs can eat many of the same mushroom species that humans can. However, it is best to stick to store-bought varieties to be on the safe side. It is also best to cook mushrooms to reduce the risk of gastric upsets (see below for further details). 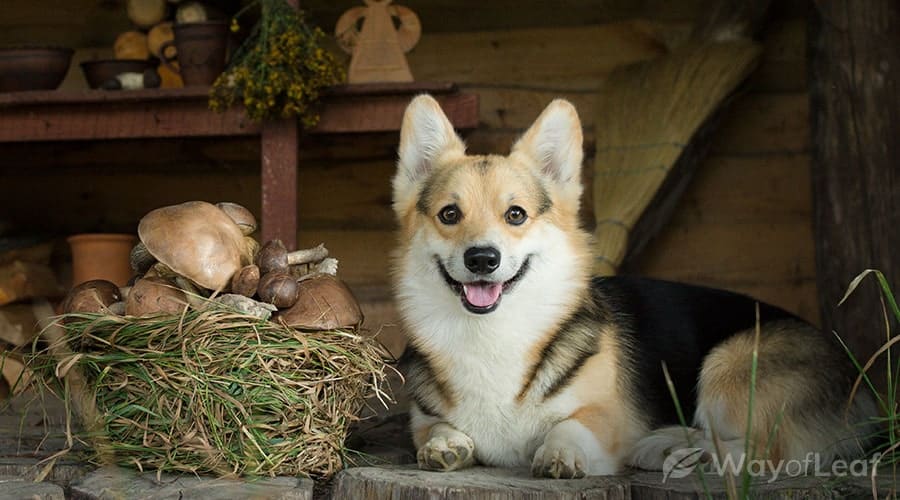 Medicinal mushrooms are safe to consume but tend to be tougher and more bitter than common edible species. Therefore, people take them as extracts, powders, or capsules. They have a range of potential therapeutic uses, from supporting immunity to promoting sleep.

There is a lack of research on the use of medicinal mushrooms for dogs. However, we will discuss the results of a couple of studies later in the article.

Finally, there are poisonous mushrooms. Some cause minor gastric upsets, while others can be deadly. As a general rule, mushrooms that are harmful to humans will also be toxic to dogs.

However, dogs could have more severe reactions to smaller amounts of mushrooms due to their smaller size.

Therefore, if you have mushrooms in your yard or walk your dog in areas where they grow, it is essential to be vigilant. Below are some of the most dangerous mushrooms and what to do if your dog has eaten some.

What Mushrooms Are Toxic to Dogs?

Probably the most dangerous mushrooms for dogs to consume are those in the Amanita family.

These include deadly species such as the death cap (Amanita phalloides) and destroying angel (Amanita virosa). They tend to be white or pale yellow-brown, with white gills, a ring on the stem, and a swollen base.

These mushrooms contain several different types of toxins and can cause severe liver and kidney damage. According to one study, amanita poisoning is fatal in approximately 50% of dogs.

Amanita poisoning has several stages. The first occurs 6–24 hours after consumption and involves vomiting, diarrhea, and abdominal pain. Affected animals may also have an increased temperature and heart rate.

Approximately 12–24 hours later, these symptoms subside. At this stage, the animal may appear to have made a full recovery. However, the mushroom’s toxins will be causing a steady increase in liver enzymes and irreversible cell damage.

According to one study, amanita poisoning is fatal in approximately 50% of dogs.

Finally, 3–4 days after ingesting the mushrooms, the liver and kidneys fail. The dog may seem lethargic, develop seizures, or fall into a coma. Unfortunately, at this point, it is usually already too late.

Some Galerina species, such as the funeral bell (Galerina marginata), are also deadly poisonous. They are small mushrooms with brown caps and white stems with a ring. They contain similar toxins to Amanita mushrooms and cause comparable symptoms if consumed.

Other potentially harmful mushrooms include those in the Inocybe, Clitocybe, Mycena, and Omphalotus families. They contain a compound called muscarine, which dogs are particularly sensitive to. It influences the central nervous system to cause sweating, tearing, and decreased heart rate. In some cases, muscarine ingestion can be fatal to dogs.

Consuming wild mushrooms can be dangerous for dogs and humans alike. It can sometimes be difficult to distinguish between edible and poisonous species and is usually not worth the risk.

If you notice your dog eating mushrooms in the wild, take them to a veterinarian immediately. Do this even if your dog has been unwell and appears to get better. Remember, amanita poisoning has a latent phase during which its symptoms appear to resolve before organ failure occurs.

If possible, collect a sample of the mushrooms and bring it with you so that a mycologist can identify them.

It is also worth noting that even edible mushrooms can be potentially dangerous to dogs. For example, there have been reports of animals becoming seriously ill after inhaling large amounts of puffball spores.

Therefore, it is safest to keep your dog away from wild mushrooms as much as possible. This could mean keeping them on a leash when walking through wooded areas and grassland, especially after heavy rain.

Raw mushrooms can harbor contaminants such as bacteria and mold. Therefore, it is always best to cook them thoroughly before consumption. This goes for humans and dogs alike and will reduce the risk of digestive upsets and other adverse reactions.

Dogs can eat cooked mushrooms, provided they are definitely an edible species.

However, it is essential to ensure that they are only cooked with other safe ingredients for dogs. Avoid using large amounts of cooking oil or strong spices, for example. Onions, garlic, and chives are also harmful to dogs and should be avoided.

As we mentioned earlier, there is little research on the use of medicinal mushrooms for dogs.

However, a 2012 study suggested they may be helpful. The research team tested a turkey tail extract on 15 dogs with hemangiosarcoma, a form of cancer. The results indicated that the dogs who took a high dose of the extract had delayed cancer progression and an increased median survival time. 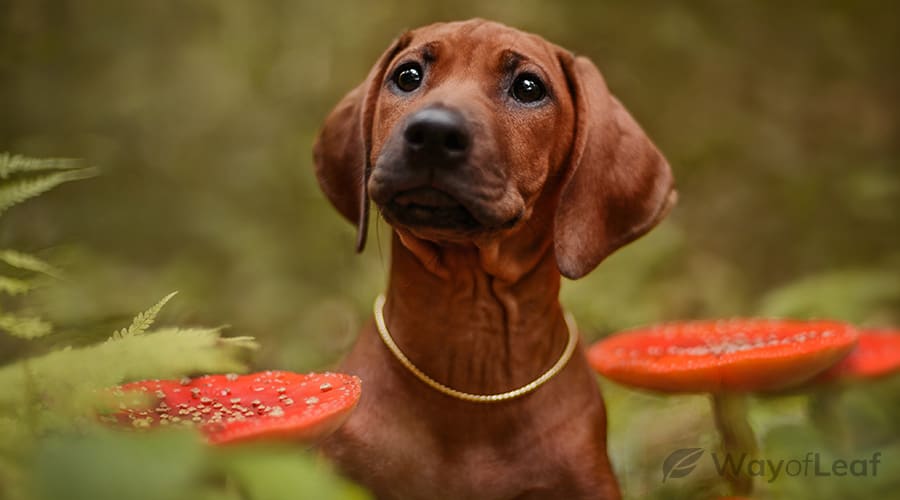 Conversely, a 2007 study on maitake extract for dogs with lymphoma did not find any significant benefits. It seems that far more research on the subject is necessary before we can draw any firm conclusions.

Learn more about medicinal mushrooms and their potential benefits by reading our complete guide.

Are Mushrooms Bad for Dogs? The Bottom Line

Dogs can eat mushrooms providing they are an edible species. However, it is best to stick to store-bought varieties, cook them well, and avoid adding other harmful ingredients.

If you see your dog eating wild mushrooms, collect a sample and take them to a veterinarian as soon as possible.

Realistically, it is probably best to err on the side of caution and only feed your pet products designed specifically for canine use. Furthermore, when it comes to medicinal mushrooms for dogs, the jury is still out, and far more research is required.

If you see your dog eating wild mushrooms, collect a sample and take them to a veterinarian as soon as possible. Identifying the fungi and ensuring that the animal receives the appropriate treatment promptly is the best way to keep them safe.

Are you considering a mushroom supplement for your pet? Be sure to read this first:

Related article
What Are the Best Mushroom Supplements for Dogs?

As a devoted pet owner, there …