Astragalus: All About This Adaptogen

Astragalus is one of the most esteemed herbs in traditional Chinese medicine. It is now becoming popular around the world due to its wide variety of health benefits.

This article explores the plant’s most common uses and whether there is any scientific evidence to support the therapeutic use of the plant.

There are many different types of astragalus, and not all of them are beneficial. In fact, some species contain neurotoxins or harmful amounts of selenium. However, Astragalus membranaceus is an herbal remedy that has been in use for well over 2000 years. It first appeared in the Shen Nong Ben Cao Jing, one of the earliest Chinese medicine texts.

There are several different types of Astragalus plants – but not all of them are beneficial. In fact, some contain dangerous neurotoxins.

In Chinese, astragalus is known as Huang Qi, and it is considered one of the most important qi tonic herbs. Its traditional uses range from alleviating respiratory diseases to preventing fatigue. 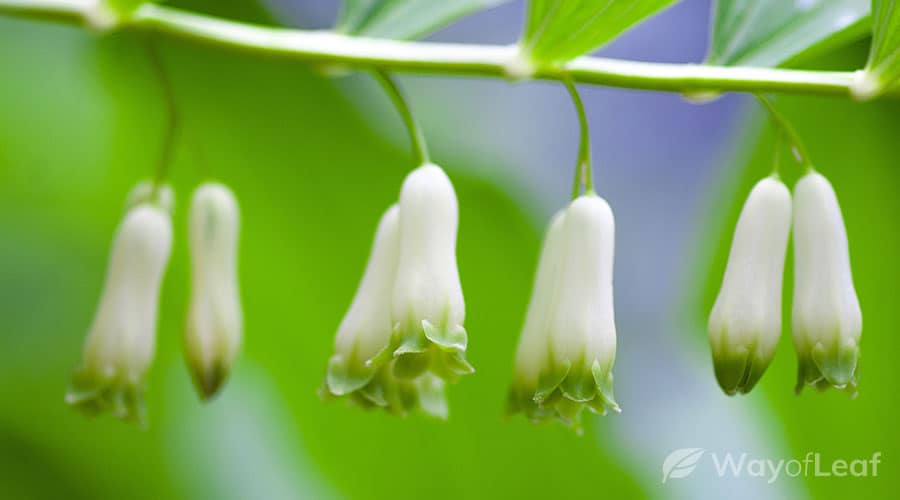 In modern herbalism, astragalus is primarily classed as an adaptogen. This term means that it helps the body to regulate itself under stressful conditions.

Below, we discuss some of its most common applications and look at the current research on astragalus.

Astragalus Benefits and Side Effects

The part of the plant that people use to make medicine is the root. It is rich in active compounds, including polysaccharides, flavonoids, and saponins called astragalosides. This combination means that astragalus has a broad range of effects on the human body.

According to a 2017 review, some of the best-researched astragalus root benefits include:

It has also been used as a skin application to reduce inflammation and enhance wound healing.

Now, let’s look at some of the most common reasons for using astragalus in more detail.

Related article
American Ginseng: What Is It?

May Boost the Immune System

Enhancing immunity and preventing infections is one of the most frequent astragalus uses. Research has shown that it possesses immunoregulatory properties and benefits the immune system in several ways.

A 2020 study found that the herb activated immune signaling chemicals called cytokines. In turn, this encouraged cells called macrophages to migrate to a specific area, a critical part of the immune response.

Among other things, astragalus may be beneficial in boosting immune health via increased cytokine activity.

A 2016 study demonstrated that astragalus extract also increased the expression of other immune cells, including monocytes, lymphocytes, and neutrophils. This research investigated the plant’s impact on four healthy volunteers.

In addition to immune system changes, the participants experienced several other effects. They included flu-like symptoms, such as fatigue, headache, and increased body temperature. These signs are a good indicator of immune system activation. The symptoms generally resolved within 24 hours.

Another common reason for using astragalus is improving heart health. Several studies have investigated its benefits, especially for people with heart failure.

A 2011 study explored the effects of three different astragalus doses on 90 heart failure patients. The subjects all received heart medication (perindopril) and either 2.25g, 4.5g, or 7.5g of the herb twice daily.

All three groups showed improvements, including heart function, six-minute walking distance, and quality of life. However, the benefits were most pronounced in the moderate and high dose groups. The researchers concluded that a moderate dose was sufficient to induce optimal improvements in heart contraction.

A 2017 systematic review and meta-analysis supported these results. It included data from 16 trials and 1864 participants. The results indicated that Huang Qi plus standard care was more effective than standard care alone for improving LVEF and other cardiac indexes. However, it concluded that the evidence from most studies was low quality.

Astragalus may also offer some protection against cardiovascular disease. A 2020 study investigated how a total flavone astragalus extract affected mice fed a high-fat diet for 16 weeks. By the end of the experiment, the treated animals displayed reduced atherosclerotic plaque size and increased plaque stability. The treatment also appeared to reduce fat storage in the liver.

May Alleviate Side Effects of Chemotherapy

People also use astragalus as an adjunct to chemotherapy treatment.

A 2005 review of four trials investigated its effects on patients with colorectal cancer. The evidence compared chemotherapy plus astragalus to chemotherapy alone or with other herbal medicines.

Cancer patients that use astragalus experience fewer chemotherapy side effects – including nausea & vomiting.

A 2019 review and meta-analysis had similar results. It compared chemotherapy plus astragalus to chemotherapy alone in 1409 colorectal cancer patients from 22 studies. The review concluded that the herb could improve the chemotherapy response rate and quality of life while reducing adverse effects. However, while three of the included studies were of good quality, the majority were poor.

Another 2019 review and meta-analysis investigated astragalus with platinum-based chemotherapy vs. chemotherapy alone in 1635 lung cancer patients from 19 trials. It found that the treatment improved response rates and the participants’ ability to carry out daily activities. They also displayed enhanced immune markers, reduced side effects, and an increased one-year survival rate. Once again, though, the evidence was low-quality.

Another possible benefit of astragalus involves controlling blood sugar. It is a common ingredient in many state-approved herbal formulas for diabetes in China. There has been a lot of research in this area, including the whole plant and isolated compounds.

A 2009 study on rats found the herb could reduce high blood sugar while improving insulin sensitivity and glucose uptake. The researchers suggested that its mechanism of action involved an enzyme known as AMP-activated protein kinase. This chemical is involved in cellular energy production and influences glucose sensitivity and regulation. Interestingly, metformin, a common diabetes drug, also works by activating this enzyme.

According to a 2013 publication, astragalus may reduce fasting glucose levels and improve homeostatic model assessment (HOMA). HOMA is a method that doctors use to assess the function of insulin-producing beta cells in the pancreas and insulin resistance.

The paper suggests that the plant has several potential benefits for patients with type 1 and type 2 diabetes, including:

It seems that the polysaccharide portion of astragalus is most helpful for type 1 diabetes as it may protect beta cells against inflammatory damage. Meanwhile, polysaccharides, flavonoids, and saponins may all provide benefits to people with type 2 diabetes.

Another one of astragalus’ traditional uses is improving renal function, and Chinese medicine practitioners often prescribe it for kidney issues.

A 2014 review and meta-analysis assessed the evidence from 22 studies on astragalus for kidney disease. It included 1323 patients, 241 of whom were on dialysis. The herb displayed promising effects in several areas, including reducing proteinuria (protein in the urine) and improving hemoglobin and blood albumin levels. Some studies also reported improvements in blood pressure. However, the quality of the evidence was low.

Early studies show potential for astragalus to be used in improving kidney function.

A 2015 study found that the herb may also benefit patients undergoing continuous ambulatory peritoneal dialysis. Eight participants took herbal formulas containing Huang Qi and other ingredients, while 16 patients acted as a control group. The results showed that those who took the herbal medicine had greater residual kidney function and daily urine volume after one and two years. Their rate of kidney function decline was also slower.

Most people can take astragalus without experiencing any adverse reactions. However, in rare cases, the side effects of astragalus may include:

Furthermore, the herb may interact with certain medications, including immunosuppressants.

Therefore, people taking these drugs should not use astragalus. It may also be harmful to people living with autoimmune disorders and is considered unsafe for use during pregnancy.

As with any treatment, it is advisable to consult a healthcare provider before taking astragalus.

How to Use Astragalus

The most traditional way of using astragalus is simmering the root in water to create a decoction. However, the process is rather time-consuming since it takes around 40 minutes to extract all of the beneficial compounds. It is also challenging to measure an accurate dosage using this method.

Fortunately, there are many other astragalus supplement options, including powders and capsules. They offer a more convenient consumption method with more precise dosing. 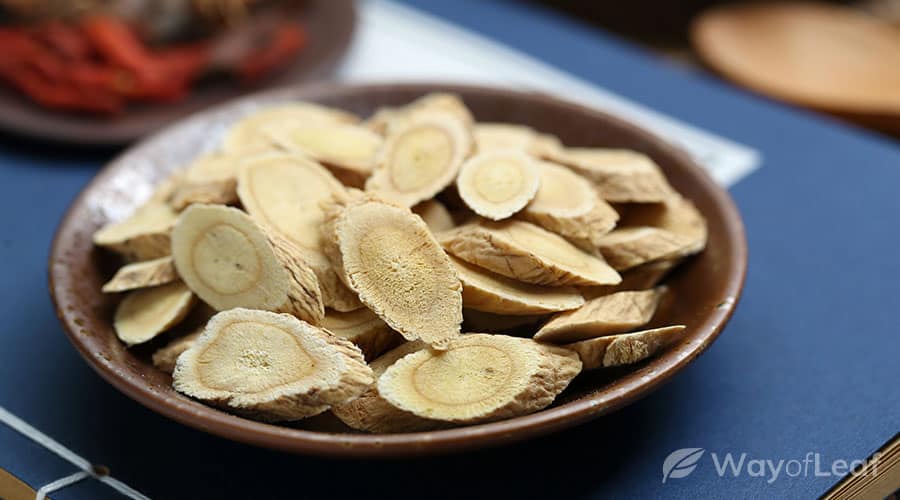 However, it is essential to purchase products from a reputable brand that provides lab reports for its products. These documents will explain exactly how much Huang Qi is in each serving and confirm there are no harmful additives.

There is no standard astragalus root dosage. The necessary amount will depend upon the individual taking it, their overall health, and the reason they are using it.

It appears to be safe to take astragalus in doses of 60g daily for up to four months. However, most people will not need to use such a large amount.

Astragalus membranaceus, or Huang Qi, is a famous Chinese medicinal herb. Its roots are rich in active compounds, and it has various possible uses. Some of the best-studied astragalus benefits include:

However, most of the existing research is of poor methodological quality. Therefore, more evidence is required before we know precisely how effective it is for specific conditions.

It is always advisable to consult a physician or qualified herbalist before use to ensure it is appropriate for one’s individual needs.