Medically reviewed by Lynn Marie Morski, MD, Esq.
Written by Editorial Team
6 min
0 comments
Read Later
The following is for informational purposes only. WayofLeaf does NOT advocate the illegal sale, use, or possession of any psychedelics. Be sure to research, understand, and follow all laws and regulations relating to the use and possession of psychedelics in the state or region you live.

Psilocybin is the psychedelic substance that makes magic mushrooms so intoxicating. An estimated 180 species of mushroom contain this compound, or psilocin, its derivative.

Magic mushrooms have a long history of usage in religious and spiritual rituals. The fungi are also popular recreationally in Europe, North America, and South America. However, magic mushrooms are legal in relatively few locations.

Presently, the landscape is changing due to evidence of psilocybin’s potential therapeutic benefits.

The landscape is changing, primarily due to evidence of psilocybin mushrooms helping with certain medical issues.

A 2017 review published in The Mental Health Clinician looked at the clinical potential of psilocybin as a means of addressing certain mental health issues. The researchers looked at its use on depressed mood, suicidality, and anxiety disorders. They concluded that psilocybin could have some efficacy in treating these conditions.

This research, in part, could help open the doors to legalizing psilocybin. In this article, we look at where people can legally take magic mushrooms today. For easier navigation, we have divided the guide into regions.

Please note: this article will mention areas where mushrooms are decriminalized. Decriminalization does not equate to full legality. Instead, it means that the offense will not appear on a person’s criminal record. Perpetrators may still receive a fine for a civil infraction.

North America (Including the Caribbean)

Psilocybin and psilocin prohibition is primarily based on the United Nations Convention of Psychotropic Substances in 1971. Nations who signed that treaty agreed to prohibit psychedelics such as LSD, mescaline, and psilocybin. At that time, there was grave concern over the rising use of these drugs. 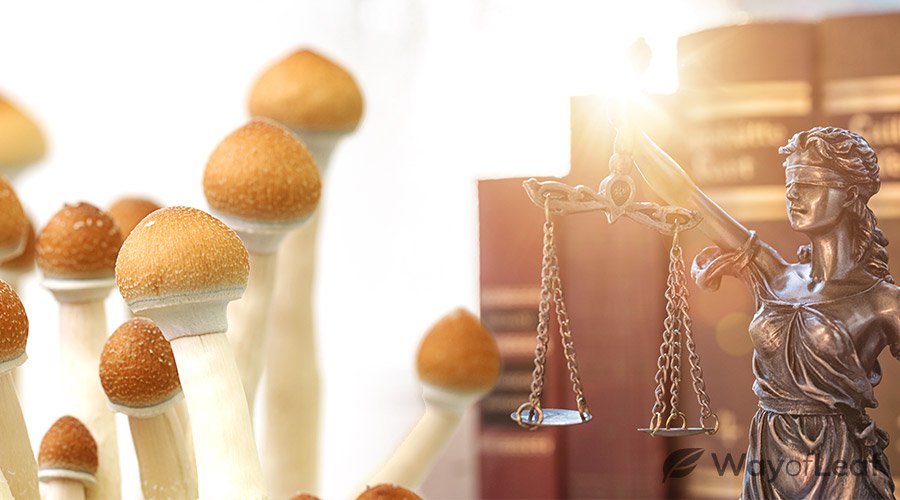 At the convention, psilocybin became a Schedule I substance. This classification suggested that it was a risk to public health with no therapeutic value. However, the convention failed to define the legality of Psilocybe mycelium or the spores of magic mushrooms.

Here’s a quick rundown of what those terms mean:

The spores of magic mushrooms contain relatively low levels of psilocybin. This was almost certainly an oversight, as it has resulted in countries exploiting the loophole.

Also, Article 32 of the treaty permits the legal usage of specific fungi for traditional indigenous uses.

The United States of America

On a federal level, psilocybin is a Schedule I substance. This means it has no therapeutic value and a high risk of addiction. However, a handful of municipalities have taken steps to soften the stance toward mushrooms.

Major cities like Denver, Santa Cruz, and Oakland have decriminalized the use of psilocybin in recent years. In almost all states, purchasing spores and growing the mushrooms is technically allowed.

Magic mushroom spores are only explicitly illegal in California, Idaho, and Georgia.

Additionally, several religious groups are permitted to use psilocybin in religious ceremonies. However, the election of November 2020 saw a huge breakthrough for psilocybin. Oregon became the first American state to legalize psychedelic mushrooms for medicinal use via the passage of Measure 109.

Through the measure, Oregon residents can legally use magic mushrooms in a therapeutic setting. Of course, after the passing of any new measure, it takes a while to iron out the kinks. At the time of writing, it seems that Oregon businesses may be able to start selling magic mushrooms in the first half of 2023.

Multiple businesses will be permitted to dispense psilocybin, but they will require a license from the Oregon Health Authority. Plus, they will need a trained facilitator who will administer the drug and supervise the users throughout their experience.

America’s northern neighbor became the second country in the world to legalize cannabis. However, Canada has not yet done the same for magic mushrooms. At present, it is legal to purchase spores and pre-inoculated grow kits. Picking mushrooms in nature is also permitted.

Laws surrounding the use of magic mushrooms in Canada are loosely enforced. Indeed, various companies sell them online in different forms. According to the Canadian Controlled Drugs and Substances Act, enforcing these laws is a low priority.

At the time of writing, Health Canada has granted exemptions to a number of terminally-ill patients and some healthcare providers to try psilocybin therapeutically.

The possession and use of magic mushrooms remain illegal in Mexico as part of the Ley General de Salud of 1984. However, indigenous tribes can use substances like magic mushrooms and peyote in religious ceremonies. It is not legal for them to do so, but the police hardly ever enforce the law against such tribes.

The result is a flourishing psychedelic tourism trade. People travel from all around the world to experience one of these ceremonies.

While the Bahamas is a signatory to the 1971 UN Convention, the sale, possession, and use of magic mushrooms are legal in the Bahamas.

Psilocin and psilocybin are illegal, but the fungal species are not, therefore, psilocybin mushrooms themselves are not considered illegal.

There are no records of people being arrested or otherwise placed in legal jeopardy for growing or possessing magic mushrooms. There are even special websites dedicated to the sale of mushrooms.

The possession of magic mushrooms is decriminalized in Austria. Technically, residents can legally grow the mushrooms but it is illegal to harvest them. It is also possible to purchase grow kits online or in Austrian stores. Also, there are no restrictions on the possession of fresh mushrooms like those found in nature.

Magic mushrooms are illegal in Iceland in dried form. However, there is no direct law forbidding the cultivation or picking of fresh mushrooms. It is important to note that psilocybin itself is an outlawed substance in Iceland.

Psilocybin and psilocin are illegal substances in Israel. However, the sale, cultivation, and possession of magic mushrooms are permitted as long as it is for research and not personal use purposes.

While psilocybin remains an illegal substance, it has been decriminalized. It is legal to purchase, sell, and possess grow kits and spores in Italy.

The possession of dry and fresh magic mushrooms is illegal in the Netherlands and has been since December 2008. This likely comes as a surprise to tourists, given the country’s reputation. However, it remains legal to purchase and use psilocybin in truffle form. These so-called magic truffles are now fully legal and taxed.

Psilocin and psilocybin are illegal substances. However, Polish law does not outlaw the magic mushroom fungal species. It is possible to find grow kits and spore kits in Poland.

Magic mushrooms are illegal in Portugal. However, the European nation decriminalized the possession of small amounts of all drugs in 2001.

Tourists can freely buy and consume magic mushrooms in this mountainous country. At present, mushrooms are uncontrolled substances in Nepal.

This is yet another nation with seemingly ambiguous magic mushroom laws. One on hand, the Philippines is a signatory to the 1971 UN treaty. On the other hand, psilocybin mushrooms are not part of the nation’s Comprehensive Dangerous Drugs Act of 2002. 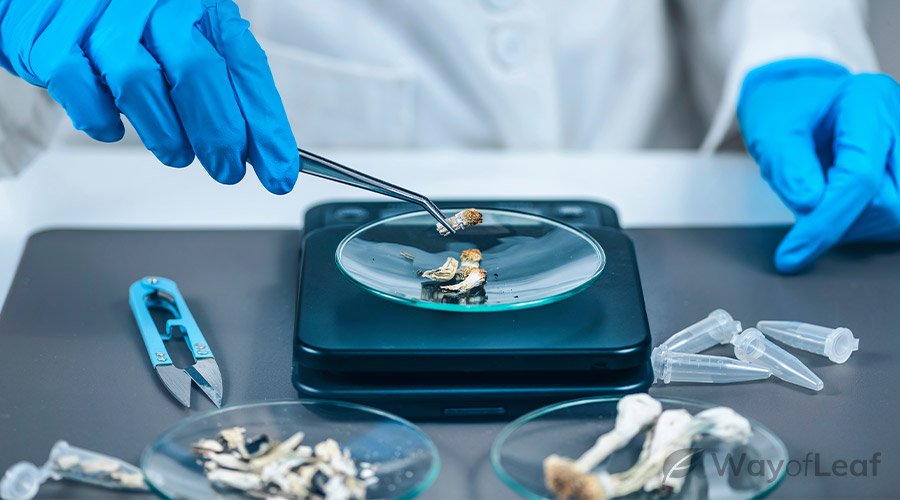 Decree 73 added psilocin and psilocybin to the list of banned substances in Vietnam in 2018. Yet the law does not forbid the use of mushrooms for ornamental uses. Scientists are also free to continue researching mushrooms. In general, psilocybin mushrooms are openly sold in Vietnam despite the law.

Visitors to this tropical location are in luck. It is relatively easy to find psilocybin mushrooms in nature. The use and possession of mushrooms are not mentioned in Samoan law. At present, there are no laws against the use of magic mushrooms in Samoa.

Final Thoughts on Where One Can Legally Take Magic Mushrooms

Ambiguity is the word of the day when discussing magic mushroom legality. The use of psilocybin is generally only fully permitted in the Bahamas, Brazil, Jamaica, Nepal, and Samoa. Even in these countries, it is more an absence of laws saying the drug is illegal, rather than laws expressly allowing its use. In dozens of other countries, there is some confusion over psilocybin and magic mushrooms’ legal status. In some places, it is legal to use but not to sell. Meanwhile, in others, it is an illegal drug, but the law is hardly ever enforced.

We urge caution if you intend on buying and using magic mushrooms in the countries listed above. While one tourist may purchase and consume psilocybin with no problems, another could find themselves in legal strife.

Finally, is it not recommended to use magic mushrooms when alone. Effects can be unpredictable and it is best if they are taken only under the guidance of a skilled facilitator.

We take no responsibility and assume no liability for any cases where an individual is arrested for the use of psilocybin after reading the information in this guide.