Medically reviewed by Lynn Marie Morski, MD, Esq.
Written by Martha Allitt
6 min
0 comments
Read Later
The following is for informational purposes only. WayofLeaf does NOT advocate the illegal sale, use, or possession of any psychedelics. Be sure to research, understand, and follow all laws and regulations relating to the use and possession of psychedelics in the state or region you live.

What are the differences between different psilocybin-containing mushroom species? We’ve compared the identification, potency, and cultivation conditions of some of the most popular magic mushroom strains to see which might be best for you.

What Magic Mushroom Strains Are the Best?

Magic mushrooms are species of mushroom that contain the psychoactive compound psilocybin. Psilocybin acts on 5HT2A receptors in the brain and causes mind-altering effects. 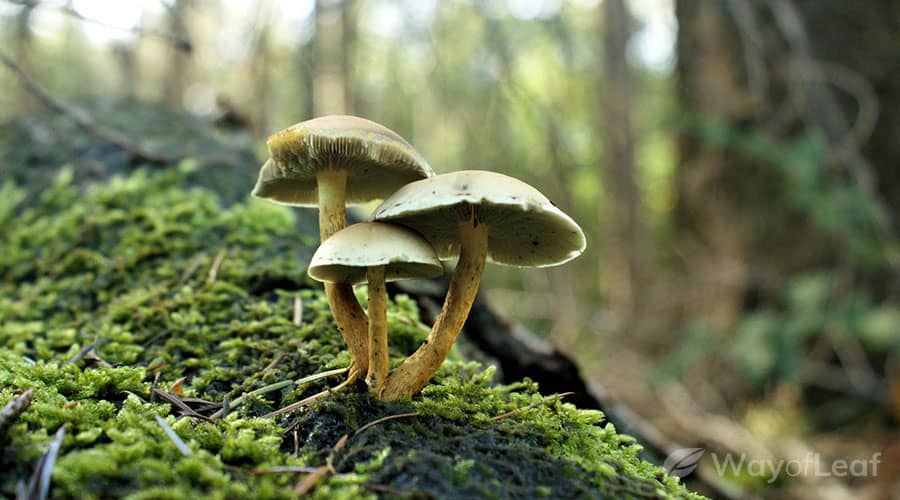 There are over 200 different types of magic mushrooms. Each species of magic mushrooms has varying concentrations of psilocybin and psilocin and baeocystin, which are also psychoactive compounds. The different amounts of each compound mean the overall effects can differ between each mushroom species.

People may have different preferences between magic mushroom species based on their psilocybin content. For example, people who prefer more intense trips may want to take more potent magic mushrooms.

We’ve provided a comparison between some of the most popular magic mushroom strains so you can decide which shrooms might be best for you.

Psilocybe hoogshagenii is known for its spiritual use among indigenous Mexican peoples. They are also known as Psilocybe Semperviva, with Semperviva meaning “long-life” as these mushrooms have prolonged survival and are resistant to contaminants.

P. hoogshagenii caps are a red-brown to orange-brown color and are roughly between 1 – 2.5cm in diameter. The stems are approximately 5 – 9cm long and 1 – 3mm thick and a white-brownish color and red towards the base
P.hoogshageniihas gills (papery ribs underneath the cap) that are purple-black in fully matured mushrooms.

P. hoogshagenii grows natively in Puebla, Oaxaca, and Chiapas in Mexico and regions in Columbia, Brazil, and Argentina.

They tend to grow well in muddy clay soils in subtropical coffee plantations.

The mushrooms’ psychoactive potency has been rated “moderately active,” and the psilocybin content reported to be approximately 0.6 milligrams per gram of dried mushroom.

P. hoogshagenii is used today in spiritual ceremonies by indigenous peoples of Mexico, suggesting they produce a notable entheogenic effect.

P. hoogshagenii has been used traditionally by the Chinatec-speaking people from Oaxaca, Mexico, to diagnose and predict the course of different diseases. The Chinatec refer to these mushrooms as ‘atkat’ or ‘judge’ as they consider the species extremely wise.

P. azurescens grow naturally in woody areas around North America. Their high percentage of psilocybin makes them one of the most potent psychedelic mushrooms known.

P. azurescens have dark caramel-colored caps that start as convex and become later flattened. The caps are around 3 – 10cm in diameter and have a smooth surface and a noticeable broad umbo (raised area in the center).

The stem can be between 9 – 20cm long and white but turns grey/brown as the mushroom matures. The base of the stem often has white tufts.

P. azurescens were initially discovered near the Columbia River near Oregon in the United States. They also grow natively in Washington, California, America, and British Columbia, Canada.

P. azurescens are one of the most potent known mushrooms in the world. The psilocybin content has been found to be up to 1.8 milligrams per gram of dried mushroom.

Reports have described the experience as incredibly intense with strong visual hallucinations and physical sensations, including feeling energized. The strength of the mushrooms can make them cognitively disorientating.

P. bohemica is a mushroom native to Europe. Up until recently, it was split into three different species: P.bohemica, P. arcana, and P. moravica. However, scientists have now shown that, genetically, all the mushrooms are of the same species but are highly variable.

P. bohemica has a broadly convex cap that is smooth, an orange-brown color, and between 2 – 4cm. The stem is between 4.5 – 8cm and 2 – 10mm in diameter, a white color, and covered in a silky gloss.

P. bohemica has subdecurrent gills (run down the stem) that are dark brown with purple tints.

P. bohemica is found frequently on decaying wood from deciduous and coniferous trees.

The mushrooms grow best in moist areas with sun exposure and are found natively throughout North-Eastern Europe.

P. bohemica has a wide range of psilocybin concentrations, ranging between 0.11 to 1.34 mg psilocybin per 1 gram of dried mushroom. This means the potency and strength of effects between different mushrooms of the same species are highly variable.

People commonly refer to P. semilanceatamushrooms as liberty caps due to their distinctive spear-shaped cap (semilanceata meaning spear in Latin). They are found naturally in multiple European countries and tend to bloom in Autumn time, around October. 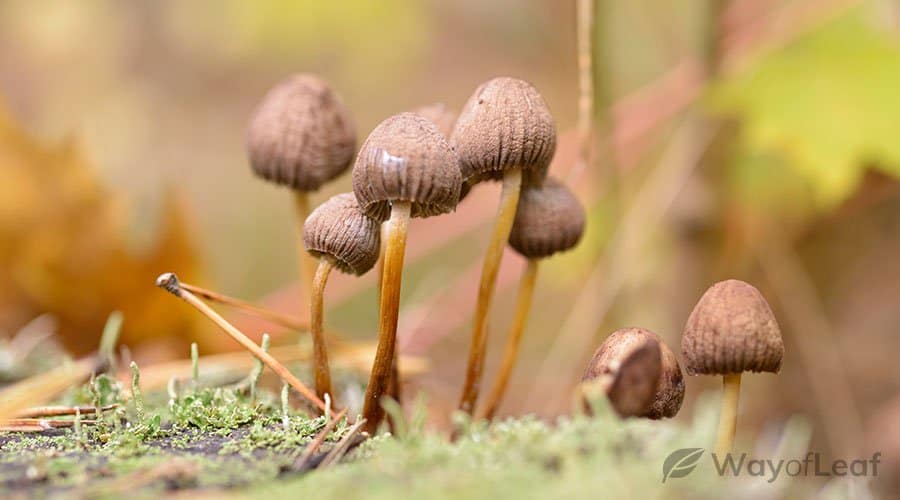 P. semilanceata has conical, brown caps ranging between 0.5 to 2cm with a distinctive “nipple-like” umbo. The stems are narrow, roughly 0.4 – 1 cm thick. Often, the stems are enlarged at the base.

The gills of the mushrooms are crowded together and dark grey in mature mushrooms.

P. semilanceata favor growth in areas with rich soil, typically in grasslands such as meadows and pastures.

They are the most widely distributed psychoactive mushroom known to date and are likely native Europe but can be found growing in North America, Canada, and New Zealand.

P. semilanceata has a wide range of psilocybin concentrations, ranging between 0.2 to 2 mg psilocybin per 1 gram of dried mushroom. The range of potency means the strength of effects between different mushrooms of this species is highly variable.

It is essential that anybody foraging these mushrooms is aware of and can tell the difference between P. semilanceata and toxic look-alike mushrooms, which can be fatal if ingested.

P. cyanescens mushrooms are also called wavy caps due to their appearance.

These mushrooms are highly prolific, and the number of places in which they can be found is rapidly expanding. Their increasing abundance is likely because they grow well on wood chips, and commercial distribution of wood chips across the globe has spread their mycelium.

P. cyanescens have a brown cap, between 1.5-5cm, which has a “wavy” shape and turns to a slight-yellow color when dried.

The stems are between 4 – 9cm long, slightly wider at the top, and covered in silver fibers.

Whenever the mushroom’s stems or gills are touched or damaged, they readily turn a blue color.

They naturally grow in the Pacific Northwest in the United States, Western, and Central Europe, Iran, and New Zealand.

P. cyanescens contain around 0.85 mg of psilocybin per 1 g of dried mushroom, making them moderately potent.

Reports suggest that P. cyanescens produces intense, vibrant visual hallucinations and is similar in experience to that of P. cubensis.

Summary of the Best Magic Mushrooms

Each different magic mushroom species has its unique concentration of psychoactive compounds, leading to distinctive effects. A more in-depth comparison chart between the varying concentrations of psilocybin, psilocin, and baeocystin is in the article sources below.

A person’s mindset and environment can have tremendous impacts on the outcome of their trip.