From caffeine to LSD, cannabis to codeine, the term psychoactive drugs encompasses a huge spectrum of different compounds.

So, what is their common feature? On consumption, psychoactive drugs are believed to impact the body’s nervous system, prompting changes in mood, behavior, consciousness, and more.

To understand the effects and risks of these drugs, many of these substances are divided into subcategories. Read on to find out ways in which these drugs can be categorized and understood.

There are many reasons why someone might consume a psychoactive compound, including medical needs, pleasure, or spiritual purposes.

However, these drugs vary in several ways, such as legality, potency, dependency, and effect. This can make classifying psychoactive drugs particularly difficult. 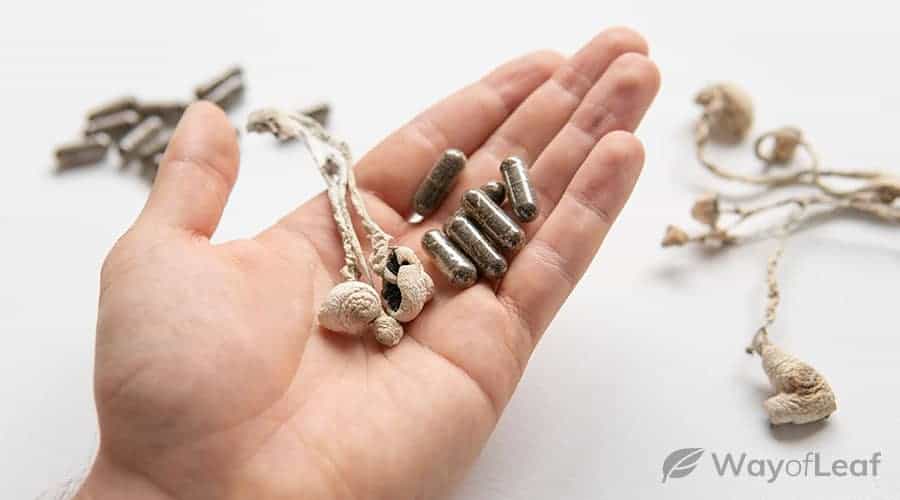 There are various ways drugs can be classified within the medical community, but little consensus seems to exist.

Despite this, many researchers look at distinctions between pharmacological effects and consequences. Some questions asked may be:

Using these distinctions, psychoactive drugs can be defined in a variety of groups. For the purposes of this article, we’ve divided them into:

Stimulants are a group of drugs known for increasing focus and energy in their users.

Stimulants work by modifying communication in the central nervous system. They also increase levels of dopamine in the brain.

So what would motivate someone to consume a stimulant?

In low doses, users may experience an increase in focus, energy, and elevated mood. We see this most commonly in caffeine consumption, which is by far the most popular stimulant consumed in the world. In fact, New Scientist reported that in North America, 90% of adults consume caffeine daily.

However, in higher doses, stimulants can produce these same effects, as well as a sense of euphoria and a diminished need for sleep.

This is no doubt why substances like amphetamines are popular among athletes, as they are known to improve endurance and recovery. However, because of this, they are illegal to consume in competitive sports.

Stimulants also offer medical benefits. Research has been conducted on some drugs, such as amphetamines, leading them to be used for various purposes, including ADHD and asthma.

However, unsurprisingly, certain stimulants, such as cocaine, can also cause adverse effects. Dependency, paranoia, increased blood pressure, and insomnia, are just a few examples.

CNS depressants are often thought of as the antithesis of stimulants. Instead of speeding up messaging between the brain and body, they slow it down.

Depressants slow down the central nervous system in several ways. One way is by aiding GABA (gamma-aminobutyric acid); this inhibitor regulates neurological processing by suppressing activity.

Another way they slow down the process is by hindering monoaminergic and glutamatergic signals. By blocking these processes, activity within the CNS is also reduced.

Like all psychoactive drugs, effects can be hugely varied. However, the most common effects of depressants are:

Many of these effects, such as lack of muscle control and a sense of elation, are particularly common after alcohol consumption. However, dependency can be a huge problem.

According to the 2019 National Survey on Drug Use and Health, over 25% of respondents admitted to binge drinking in the month before. Despite the risks, ethanol remains one of the most popular psychoactive drugs to consume.

Other depressants, such as benzodiazepines, are often used for various medical needs, including anxiety, insomnia, OCD, and seizures.

Dubbed colloquially as ‘designer drugs’, this category contains a spectrum of imitation drugs. In essence, these drugs are purposefully crafted to produce the same pharmacological effects as other more popular recreational drugs.

Analog drugs resemble a wide variety of psychoactive groups. Their ever-adapting nature makes the group challenging to define and makes them very dangerous to consume.

Typically synthetic drugs are consumed recreationally and may produce sedative, hallucinogenic, or stimulating effects. Very little scientific research has been conducted on these synthetic drugs.

In addition, most analogs remain a schedule 1 substance under the Controlled Substances Act of 1970.

Opioid substances have received their fair share of negative press. Originally made from the poppy plant but now more commonly synthesized, opioid drugs are infamous for their potential for overdose.

Common opioids include oxycodone, morphine, and codeine. These substances are potent pain relievers. 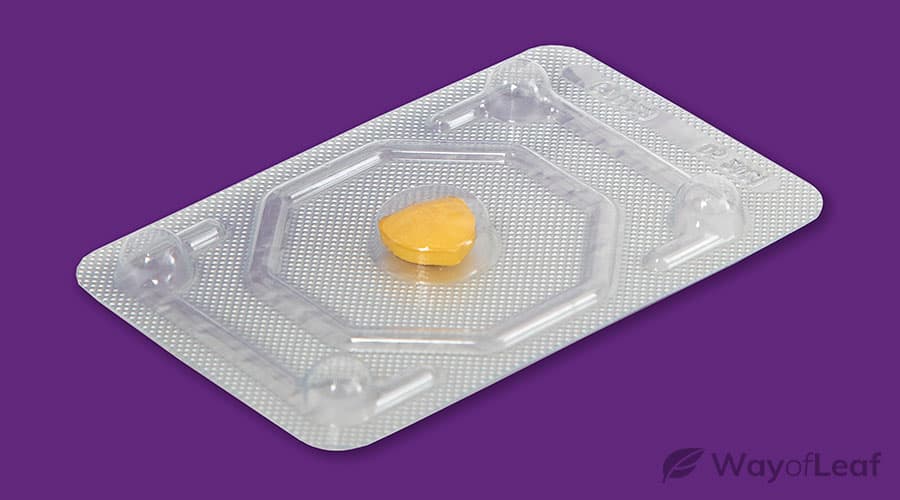 They primarily work by binding to or blocking opioid receptors, most notably mu, kappa, and delta. These receptors are found in the nervous system and other tissues in the body.

Research also suggests that these receptors are highly involved in pain responses and management.

However, issues such as tolerance, compulsion, and dependence on opioids have become a concern for medical professionals and consumers.

In fact, the overprescription and the illegal manufacturing of opioids have led to a global crisis. According to one study, around 16 million people have or are suffering from opioid use disorder.

Other side effects of opioids include:

Inhalants include a group of psychoactive substances that are typically consumed only through inhalation.

They are often used recreationally, even though that’s usually not their intended purpose. Users may experience effects similar to depressants, including slurred speech, lack of bodily control, dizziness, and a sense of euphoria.

However, the long-term effects of inhalants can be severe. Brain damage, liver damage, and hearing loss are potential risks.

Inhalants are found in everyday household items, medical and industrial products. This makes them popular with younger consumers and also more challenging to control usage.

One way to categorize inhalants are:

Some inhalants are used for medical purposes. Substances like chloroform and nitrous oxide (also known as laughing gas) are sometimes used as anesthesia for minor surgeries.

Sub-types of the cannabis plant include sativa, indica, and hybrid cannabis strains. However, they all have one thing in common: they contain tetrahydrocannabinol (THC).

THC is the main compound responsible for cannabis’s psychotropic effects.

Based on the latest research…

Research suggests that THC most prominently interacts with two cannabinoid receptors: CB1 and CB2. Much like other psychoactive drugs, these receptors are found in the central nervous system and, more specifically, the endocannabinoid system.

Cannabis is used both recreationally and medically. However, the effects of cannabis use vary significantly from person to person.

In that sense, cannabis is not defined directly under stimulants, depressants, or hallucinogens.

The drug can be used in several forms: inhalation, orally via tinctures, edibles, and capsules, topically, and more.

Hallucinogens is an umbrella term used to define substances that cause hallucinations, strong changes in perception, and sensory abnormalities.

Subcategories based on effects include:

Examples of psychedelic substances include:

Unlike dissociatives or deliriants, these compounds work as serotonin-receptor agonists. This means they bind to serotonin receptors found in the central and peripheral nervous system, such as 5-HT2A.

The effects of psychedelics are often described as ‘mind-altering’ and evoking a ‘spiritual awakening’.

Examples of dissociative substances include ketamine and nitrous oxide.

As well as hallucinogenic effects, these compounds also produce similar results to CNS depressants. Analgesia, detachment from the environment, depersonalization, and heart rate changes are among possible reactions.

Some research has suggested that compounds like ketamine achieve dissociative effects by blocking signals in the NMDA receptor. Found in nerve cells, these receptors are also impacted by other psychoactive substances such as ethanol.

Examples of deliriants include atropine, found in nightshade, and muscimol, found in the fly agaric mushroom.

As the name suggests, these compounds produce a state of delirium, which makes them particularly dangerous. Rather than creating a lucid state like other hallucinogens, these compounds can produce intense confusion and lack of physical control.

Their effects make them largely unpopular as recreational drugs and their use is considered very risky.

Interestingly, the common spice nutmeg has shown deliriant and hallucinogenic effects in large doses. Research suggests this may be down to the compounds myristicin and elemicin.

Classifying psychoactive drugs is not a simple task, nor is it one in which experts have come to complete agreement.

The term encompasses a broad range of substances with diverse effects and legal statuses, and people use them for varying reasons. Furthermore, while many psychoactive substances have potential therapeutic benefits when used appropriately, they can be dangerous too.

While many psychoactive substances have potential therapeutic benefits when used appropriately, they can be dangerous too.

Therefore, the majority of psychoactive drugs should only be used in a controlled environment with professional supervision. Others should be avoided altogether. Even widely accepted substances like caffeine and alcohol must be consumed responsibly to reduce the risk of adverse effects.

It is also important to note that this article is intended for informational purposes only, and many of the substances on our list are highly illegal. It is readers’ responsibility to research the relevant laws in their area.