Since the re-discovery of psychedelics in the West, there has been a long-standing interest in the link between psychedelics and dreaming.

Some of the similarities between psychedelic experiences and the dreaming state include vivid visual hallucinations, heightened emotions, and disorganized thinking. These resemblances have led scientists to investigate whether there are any overlapping biological mechanisms between psychedelics and dreams.

We’ve investigated the similarities, differences, and science exploring the link between psychedelics and dreams below.

NREMS is when deep sleep occurs, and brain activity is the slowest. During this phase, there is no activity in any muscles, including the muscles of the eyes.

Conversely, REMS is when lighter sleep stages occur, and brain activity increases. In REMS, major muscles such as the arms and legs are paralyzed, but the eyes move rapidly behind closed eyelids.

When people wake up from REMS – they report dreams which tend to follow a narrative and involve vivid sensory and motor hallucinations.

Studies show that when people wake up from REMS – they report dreams which tend to follow a narrative and involve vivid sensory and motor hallucinations.

Because REMS is most associated with dreaming, scientists have investigated the similarities between REMS and psychedelics.

Hallucinations in psychedelics and dreaming

The definition of a hallucination is a sensory experience that happens in the absence of stimulation by the relevant sensory organs. In psychedelics and dreams, these hallucinations tend to be visual.

Reports from people who have taken psychedelics in a controlled setting describe closed-eye visual hallucinations which are “dreamlike” in nature. They also describe brightly colored geometric patterns and shapes, similar to hypnagogic hallucinations – hallucinations that occur between dream and waking states. 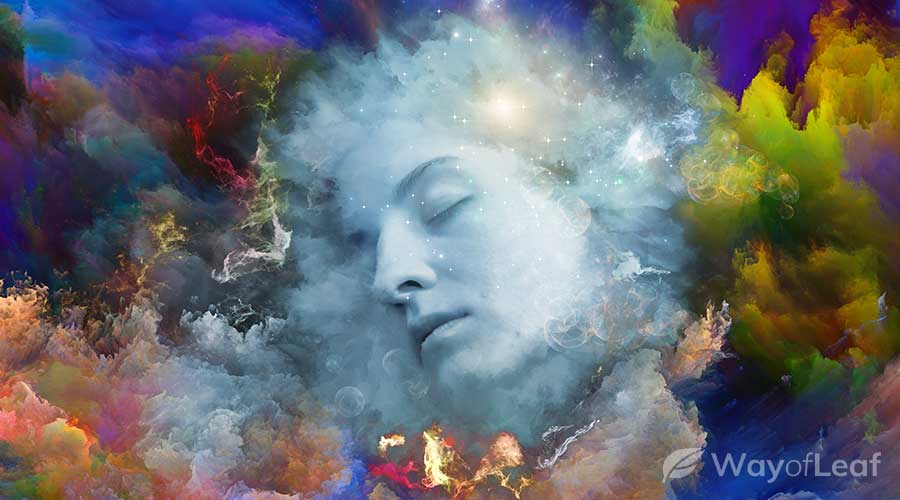 The psychiatrist and dream researcher, Allan Hobson, proposed a model to explain a mechanism of dreaming known as the activation-synthesis model. In this model – signals spontaneously happen in the lower parts of the brain. The upper parts of the brain associated with producing emotions, sensations, and memories, then try to make sense of these signals, resulting in dreaming.

The activation-synthesis model is a bottom-up approach because signals pass up through lower to higher brain levels.

In ordinary waking consciousness, the prefrontal cortex in the upper brain shuts off signals from lower brain regions to “filter out” unnecessary information. Scientists have proposed this filtering mechanism is cut off during a psychedelic experience. This means extra information is passed to sensory and emotional centers from lower brain areas, causing hallucinations.

In contrast, other theories about psychedelic hallucinations suggest a top-down approach, in which hallucinations happen because of spontaneous signals in the upper parts of the brain concerned with sensation and vision.

Dreams often have an unusual nature and are disconnected from reality. This peculiarity of the dream state is referred to by scientists as cognitive bizarreness.

The participants who took LSD had increased cognitive bizarreness during the mental imagery task compared to the placebo group, highlighting the similarities between REMS and LSD.

Related article
What Is Calea Zacatechichi, and Why Is It “The Dream Herb”

Our guide to this fascinating …

A reason dreaming may be biased toward more negative emotions is due to the evolutionary theory for dreams. In this theory, the function of dreaming is to simulate real life-threatening situations, so the dreamer can better mentally prepare to recognize and avoid threats.

Evidence for this theory is that during REMS, activity in a brain area called the amygdala, which is associated with perceiving and responding to danger, increases.

Contrastively, researchers have shown that LSD decreases activity in the amygdala and impairs people’s ability to recognize fearful situations.

Connection Between Psilocybin and Dreaming

Effects on the Default Mode Network

The default mode network (DMN) is a group of brain areas activated in mental tasks involving autobiographical thinking (thinking about the self).

Researchers have shown that psilocybin causes a decrease in DMN activity and an increase in measures of ego-dissolution (a loss in the sense of self). 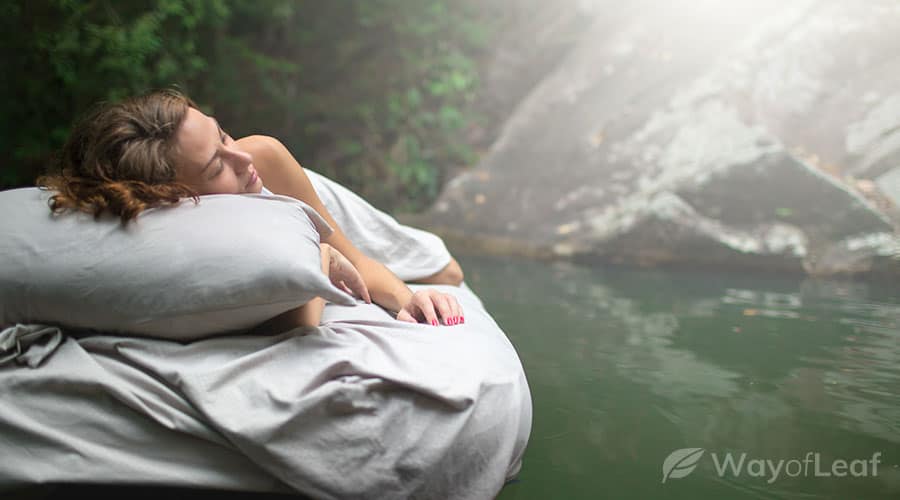 As DMN over-activity is associated with several mental health disorders, such as depression and PTSD, decreasing DMN activity is likely linked to psilocybin’s therapeutic effects.

Although REMS doesn’t decrease DMN activity like psilocybin, brain imaging studies have shown the DMN has a different pattern of connectivity and firing compared to waking states.

Changes in the DMN firing during REMS may explain why people have altered experiences of self during dreaming.

Effects on the Posterior Cingulate Cortex

The posterior cingulate cortex (PCC) is a key region within the DMN. In ordinary waking consciousness, signals from the PCC inhibit a brain region called the medial temporal lobe (MTL) from activating.

The brain’s medial temporal lobe may play a role in dreaming during REMS and the dreamlike qualities of psychedelics.

People with epilepsy, who have an overactivation in their MTL during seizures, describe the experience as having dreamlike qualities. This suggests that the MTL may play a role in dreaming during REMS and the dreamlike qualities of psychedelics.

In line with this evidence, researchers have shown that in both REMS and under the influence of psilocybin, people’s brains show decreased PCC and increased MTL activity.

Psilocybin activates 5HT2A receptors in the brain, which are proteins that respond to the chemical messenger serotonin. Blocking these receptors stops hallucinations associated with psilocybin, highlighting the role of serotonin in visual hallucinations.

SSRI antidepressants modulate the amount of serotonin in the brain. Evidence shows that giving people SSRIs increases the intensity of their dreams, similarly highlighting the important role of serotonin.

Summary on Psychedelics and Dreams

Although psychedelic-induced states and dreaming are separate phenomena, there are several overlaps between the mechanisms behind both.

As scientists discover more about how psychedelics work in the brain, these findings may help us better understand the biology of dreaming and vice versa.

Related article
Why Does Weed Give You Crazy Dreams?

The link between cannabis and …