Psilocybin mushrooms are one of the most commonly used psychedelics around the world. People typically consume these natural entheogens because they produce hallucinogenic effects, such as visual and auditory distortions.

However, in recent years, many people have been experimenting with low doses of the fungus, often called mushroom’ microdosing’.

So, what is microdosing mushrooms, and why has it become so popular? Please read our full overview to find out more.

An Introduction to Mushrooms

Psilocybin mushrooms are a variety of psychoactive fungi that grow naturally on the earth. There are over 200 species of this mushroom, with genera that include copelandia, gymnopilus, and psilocybe, the most common.

People have been using psychedelic mushrooms for millennia. Research has shown that even great civilizations like the Aztecs used them for rituals and ceremonies. 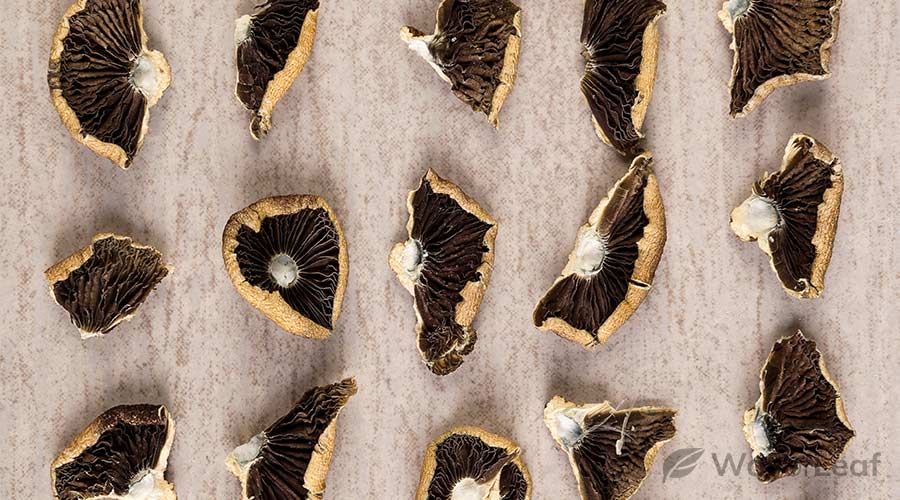 Believing they were sacred, the Aztecs named hallucinogenic mushrooms teonanácatl, or ‘gifts from the gods.’

In more modern times, the use of psychedelic mushrooms has become a contentious subject. The main concern over mushroom use often centers on their hallucinogenic effects.

Does microdosing psilocybe mushrooms provide an answer to these concerns?

What Is Microdosing Psilocybin Mushrooms?

Many refer to psilocybin mushrooms as ‘magic mushrooms.’ This slang term developed because when eaten in large quantities, they can produce a mystical experience known as a ‘trip.’

Many people also experience changes in their mood, perception, and emotional state, amongst other things. A psychoactive compound found within the fungus called psilocybin causes these effects.

When psilocybin is consumed in small amounts, research has found that it loses its hallucinogenic quality.

When psilocybin is consumed in small amounts, research has found that it loses its hallucinogenic quality. However, many believe that the compound can still provide sub-therapeutic benefits.

This intentional use of psychedelic drugs, such as psilocybin mushrooms or LSD, in small quantities, is known as microdosing.

So, what are the benefits of microdosing mushrooms?

As mentioned above, microdosing psilocybin doesn’t produce a traditional psychoactive trip. For instance, users won’t experience visual and auditory hallucinations or an altered perception of space and time.

Many consumers consider this a huge positive because it makes the compound more manageable to use.

In small doses, psilocybin can still cause sub-perceptual effects. Here are some of the most common:

Aside from those mentioned, some people who microdose mushrooms also claim it’s helped them battle depression.

Researchers are still studying the benefits of microdosing mushrooms, and at present, most evidence is anecdotal.

As microdosing involves such small quantities of the fungus, side effects are not as common or severe as full doses can be. However, this doesn’t mean they are non-existent.

Some possible side effects of microdosing mushrooms can include anxiety and physiological discomfort, like nausea.

The likelihood of experiencing negative effects can depend on individual physiology and dosage.

Psilocybin mushrooms are considered a serotonergic drug, just like DMT or LSD. These compounds work in similar ways, most notably by interacting with serotonin 5-HT receptors in the brain.

During digestion, the psychoactive compound in magic mushrooms, psilocybin, is turned into psilocin. 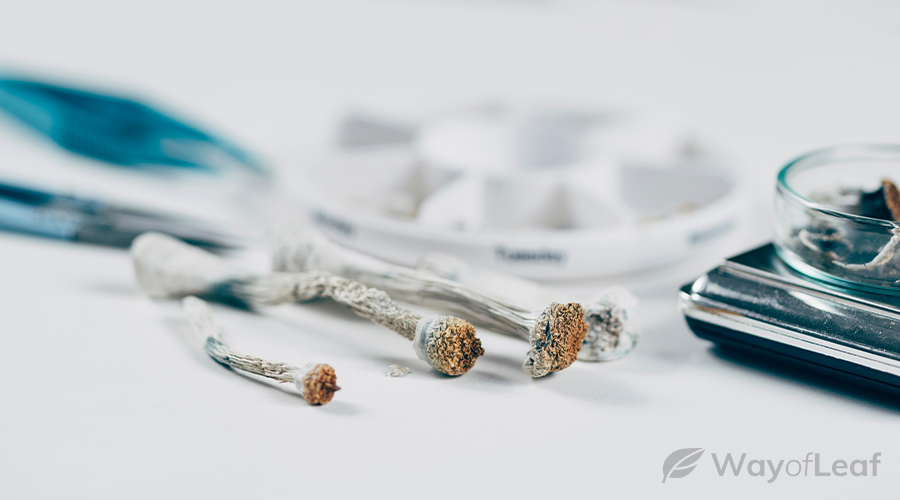 The compound psilocin has a similar chemical structure to serotonin, and it’s believed to act as a partial agonist to these receptors.

5-HT receptors are thought to impact important functions such as mood, learning, and sleep. Some studies have speculated this may be a partial explanation for why magic mushrooms could influence behavior and psychology.

Psilocin’s relationship with the neurotransmitter dopamine may also play a part.

However, much of this research is based on high doses of mushrooms. There is still much to learn about how microdosing mushrooms affects these chemical pathways.

Psilocybin mushrooms are available in a variety of forms that include:

The best and most common choice for microdosing is dried whole mushrooms crushed into a powder.

When it comes to microdosing magic mushrooms, many users choose to follow James Fadiman’s technique on quantity and frequency. The psychedelic researcher suggests that a microdose should be roughly 1/10 of a regular dose.

No definitive amount of mushrooms is considered a microdose.

However, no definitive amount of mushrooms is considered a microdose.

Anecdotal evidence also suggests that the efficacy of psilocybin mushrooms is determined by how often it is used. Thus, many people choose to consume mushrooms once every three days, although routines can vary.

Microdosing Mushrooms: A Study on Legality

Federal law in the US affirms that psilocybin mushrooms are a schedule 1 drug. Therefore, microdosing mushrooms is highly illegal in most places.

However, due to psilocybin’s low-risk status, magic mushroom regulations have been relaxed in some states and cities. Oakland, Santa Cruz, and Ann Arbor are just a few cities where possession of magic mushrooms has been decriminalized.

Outside of the US, some countries have more lax regulations on psilocybin mushrooms. For example, the mushrooms are legal in Brazil and Jamaica.

Microdosing is becoming an increasingly popular trend in modern culture. Many people see it as a method of coping and even thriving in fast-paced lifestyles. Luckily for avid microdosers, psilocybin mushrooms are slowly being decriminalized in some parts of the US.

Psilocybin mushrooms have shown great potential as a ‘performance enhancer,’ with possible effects such as increased emotional stability and focus.

However, more research needs to be conducted on both the short and long-term effects of consuming this fungus.

For readers considering microdosing mushrooms, we advise you to always check your local area’s rules and regulations before consuming.