Nootropics are so-called ‘smart drugs’ that potentially enhance mental function. Proponents of nootropics claim they work regardless of whether you’re a senior citizen, teenager, or thirtysomething parent.

High-quality products possibly improve certain aspects of brain health and increase focus and alertness. Prescription nootropics, such as Axura, are sometimes used to help with symptoms associated with Alzheimer’s disease, for example.

Apart from FDA-approved prescription medications, there are many drugs and supplements available over-the-counter. These OTC options are widely available online, but the efficacy of many such products is in question.

This rapidly growing market would certainly benefit from improved oversight. At present, there are dozens of options from brands making questionable claims, and therefore, consumers must perform detailed research to separate reputable brands from ones worth avoiding.

What Is Prevagen – And Who Created It?

Quincy Bioscience created Prevagen, a product that boasts apoaequorin as its main active ingredient. The company is a biotechnology firm based in Madison, Wisconsin. Quincy claims it is set apart from other organizations due to its cutting-edge applications of apoaequorin, a recombinant protein used as a dietary supplement. 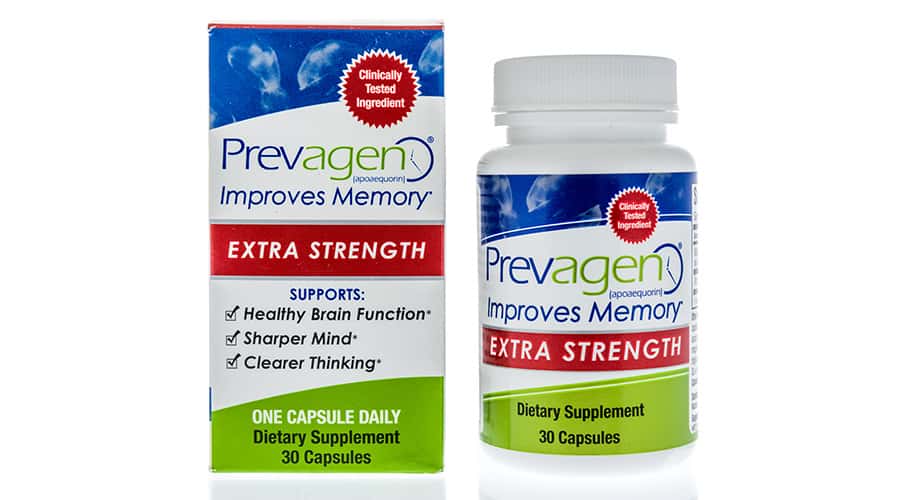 Originally discovered in jellyfish in 1962, apoaequorin was patented by Quincy Bioscience. The company uses it to create various products designed to support cognitive function. Prevagen was first sold in 2007, and more than one million people have tried it. Today, it is available in over 50,000 stores across the United States.

How Does Prevagen Work?

Prevagen has two ingredients: apoaequorin and vitamin D. Each packet has 30 tablets or capsules, with 10mg of apoaequorin and 2,000 IU of vitamin D per unit. Quincy Bioscience now sells an Extra Strength option with 20mg of apoaequorin, and users are supposed to take one capsule a day with water. The company makes plenty of claims regarding Prevagen’s benefits, but do they stack up to further scrutiny?

Prevagen is marketed as a “brain health supplement clinically shown to help with mild memory loss associated with aging.” Quincy Bioscience says this is also the most commonly reported benefit among its customers. The supplement potentially regulates the level of calcium in brain cells, which is essential because calcium plays a role in neuron function and signaling between brain cells.

The vitamin content of Prevagen is potentially useful due to the population’s level of vitamin D deficiency. A study published in Cureus in 2018 discussed a link between low vitamin D levels and an increased prevalence of dementia or depression.

According to the Institute of Medicine, the RDA of vitamin D is 600 IU for young adults and 800 IU for people aged 70+. The Vitamin D Council suggests we get 2,000 IU a day, which is the amount per Prevagen capsule. However, what about its primary ingredient, apoaequorin?

What research is available that suggests apoaequorin can help brain health?

The answer is: “not a great deal.” Apoaequorin is a calcium-binding protein in the Aequorea victoria luminescent jellyfish found off North America’s west coast. Quincy Bioscience claims that its product could improve memory and support clearer thinking, a sharper mind, and healthy brain function.

However, there is only ONE study that backs up any of these claims to date. This randomized controlled trial was published in Advances in mind-body medicine in 2016. The researcher’s goal was to discover whether Prevagen (containing 10mg of apoaequorin) improved measures of cognitive function in community-dwelling adults. There were 218 participants aged between 40 and 91 who had self-reported memory concerns.

Related article
What Is Modafinil? [Exploring the Nootropic]

The conclusion was that there was “a strong relationship between apoaequorin and improvements on a quantitative measure of cognitive function, specifically verbal learning.” Apart from this study, nothing in the available medical literature shows apoaequorin plays any role in human memory.

Furthermore, Quincy Bioscience conducted the study, introducing potential bias. Even the official Prevagen website offers no other studies on the supplement’s health benefits.

According to the research, Prevagen seems to have minimal side effects. Some users have reported dizziness, headaches, and nausea. However, a study that looked into apoaequorin said it is generally safe with no major adverse effects.

There is other research into the safety of apoaequorin, including this study published in 2013. The researchers gave rats oral doses of it as much as 666.7 mg/kg per day; this is around 4,000 times the RDA of Prevagen Regular Strength. Overall, the researchers said no adverse effects were observed even at this extremely high dose.

What Is Neuriva – And Who Created It?

A company called Schiff created Neuriva Original. It is a reputable brand, founded in 1936 and currently owned by Reckitt Benckiser. Neuriva is just one of a long line of Schiff product ranges, which also includes Airborne, MegaRed, and Schiff Nutrition. It is undoubtedly a bigger name than Quincy Bioscience, but is Neuriva worth your time and money?

How Does Neuriva Work? 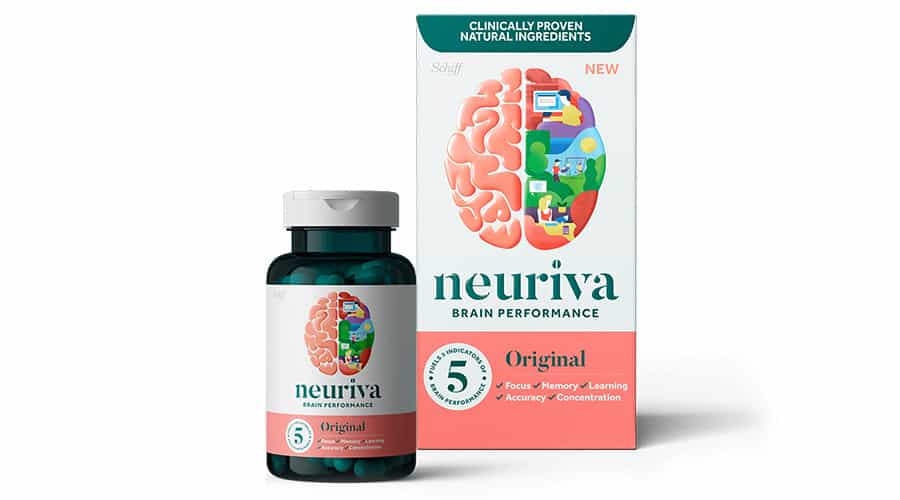 According to Schiff, the supplement is clinically proven to help enhance memory, improve neuron health, and boost learning ability. It achieves this by increasing the level of brain-derived neurotrophic factor (BDNF). BDNF is a protein that helps with communication between our brain cells, and low BDHF levels are associated with decreased brain performance and impaired learning.

There is also Neuriva Plus which fuels six indicators of brain performance. Its added ingredients are vitamin B6, folate, and vitamin B12, with the coffee fruit extract, increased to 200mg per capsule. However, this review focuses on Neuriva Original. Let’s check out the science behind Neuriva’s active ingredients.

The claim from Schiff is that coffee fruit extract is good for the brain. A 2021 study found that whole coffee cherry extract increased BDNF and improved the reaction and attention time of older adults with subjective cognitive impairment. While this is seemingly good news, the extract used in the study is technically not the same as what’s in Neuriva, although they are similar.

However, there is a greater degree of evidence regarding phosphatidylserine (PS) and its ability to improve cognitive functioning. It is a compound in cell membranes involved in cell death and cellular communication. A review of studies published in Nutrition in 2015 analyzed the effect of PS on the human brain.

The researchers reviewed 127 articles regarding PS and the brain published before June 2014. Overall, they concluded that PS is needed for healthy nerve cell membranes and myelin. The evidence suggests significant interactions between PS, cognitive aging, cognitive activity, and the retention of cognitive functioning ability. In simple terms, it could help keep our minds and memories sharp.

PS is also seen as a potential treatment for Alzheimer’s disease and other memory problems. Ultimately, of all the ingredients in Prevagen and Neuriva, phosphatidylserine has by far the most evidence regarding its possible beneficial impact on brain health.

It is telling that PS is included in a growing range of nootropics. However, the 100mg contained in a single Neuriva capsule is less than what’s available in many other products. Indeed, there are products available on Amazon that offer up to 300mg of PS per serving.

There are no reported adverse effects from coffee fruit extract. On the other hand, potential side effects of PS include insomnia, gas, and an upset stomach. However, these symptoms are only common when using 300+mg of PS per day, and Neuriva’s phosphatidylserine content is well below this limit.

Can You Take Neuriva and Prevagen Together?

Thus far, there is no research on whether one can use Neuriva and Prevagen together. At this point, there is nothing to indicate that ingredients in either option will interact with one another negatively.

In the Neuriva vs. Prevagen contest, customer reviews are generally positive. On Amazon, for example, Neuriva has over 4,000 reviews with an average rating of 4.2 out of 5 stars. An impressive 63% of these reviews offer five stars. Similarly, 63% of Neuriva Plus reviews gave the product five stars, for an overall score of 4.3. Those who have tried either one say they feel younger and sharper after using the product.

Prevagen has earned an average rating of 4.3 from over 5,700 Amazon reviews, and 64% of reviewers gave it five stars.

However, a significant number of independent review sites have slated Prevagen, claiming that it doesn’t do anything. The main bone of contention is that the only study citing the efficacy of apoaequorin for brain health came from its maker.

Prevagen has enjoyed significant sales, but its recent legal issues could damage the brand.

Another black mark against Prevagen is that it has been the subject of legal action by the Federal Trade Commission (FTC) and different state governments alleging false advertising. There was also a class-action lawsuit against Quincy Bioscience.

Known as the Prevagen Brain Health Supplement Class Action Settlement, it received final approval in November 2020. The terms of the settlement state that eligible purchasers can recover a cash refund of 30% of their purchases (capped at $70) from Quincy Bioscience. It benefits anyone who bought at least one Prevagen product from the brand or an authorized retailer between January 1, 2007, and July 21, 2020.

Plaintiffs claimed that Quincy Bioscience deliberately misrepresented its products as capable of reducing memory loss and helping with brain health. For the record, Quincy agreed to settle but did not admit any wrongdoing.

Which Is Better: Neuriva vs. Prevagen?

Ultimately, it seems as if there isn’t much of a contest in the Neuriva vs. Prevagen battle after all. Prevagen has enjoyed significant sales, but its recent legal issues could damage the brand. Its main active ingredient doesn’t have nearly enough research to back any of the claims made by Quincy Bioscience.

Although the coffee cherry extract in Neuriva similarly has little scientific evidence to back Schiff’s claims, phosphatidylserine is a different story. PS has a relatively significant number of studies that suggest it could have brain health benefits.

However, Neuriva isn’t immune from criticism either. Reckitt Benckiser settled a lawsuit in April 2021, and it can no longer claim its products are ‘backed by science.’

Overall, Neuriva vs. Prevagen reviews suggest that Neuriva is the favored product. However, neither one is considered among the top-rated nootropics on the market. Prevagen contains nothing but vitamin D and an obscure ingredient, apoaequorin, which has no evidence showing its capacity for improving brain health barring research from Quincy Bioscience.

Meanwhile, phosphatidylserine is the only active ingredient in Neuriva that has scientific studies suggesting its brain benefits. There are many other nootropics on the market that offer an even greater level of PS. Moreover, neither product includes nootropics such as lion’s mane, L-Tyrosine, and various other natural cognitive enhancers with far more scientific research to back them up.

Ultimately, it’s up to the individual to determine whether either of these products deserve your attention and money.