Modafinil has cognitive-enhancing properties meaning people use it as a nootropic – a chemical that can increase brain function. It is popular among university students who use it to help study for exams and focus on coursework and essays for long periods. 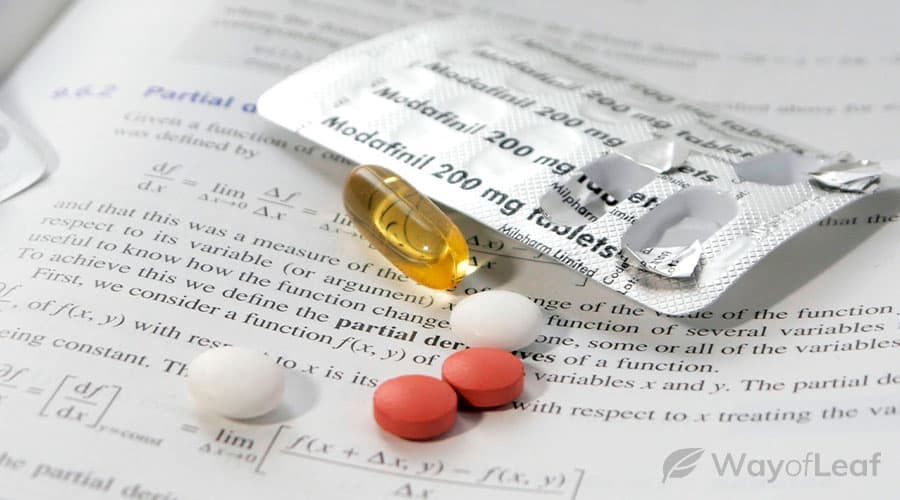 Researchers have found modafinil increases the concentration of certain chemicals in the brain. These include dopamine and norepinephrine. Effects of dopamine include improving focus and mood, and effects of norepinephrine include activating the sympathetic nervous system.

Research has also shown modafinil can decrease the amount of GABA in the brain. As GABA is a chemical involved in inducing sleep – this biological effect may explain why modafinil improves wakefulness.

By promoting wakefulness, modafinil counters the effects of tiredness and other problems related to sleep deprivation. The Food and Drug Administration (FDA) has approved modafinil as a medication for sleep-based disorders to be prescribed by doctors, including:

In some instances, doctors have prescribed modafinil for patients with ADHD as an unofficial “off-label” treatment. The FDA does not currently approve modafinil as an ADHD medication. However, research suggests modafinil could have benefits for ADHD patients. For example, one analysis study showed that modafinil significantly improved ADHD compared to a placebo in adolescents at home and school across 927 study participants.

A common symptom of major depressive disorder (MDD) and bipolar depression (BD) is fatigue. As such, medical researchers have investigated the effects of combining antidepressant medication alongside modafinil to help reduce fatigue in these conditions.

Another study showed that combining modafinil with antidepressants reduced measures of fatigue in patients with MDD. However, two of the patients taking modafinil during the experiment experienced increased feelings of suicidal ideation.

Fatigue is also a common negative symptom of schizophrenia. Research has shown modafinil could help improve fatigue in schizophrenic patients. Evidence suggests it could also help improve cognitive function in patients, although this is limited.

One study showed modafinil increased psychosis in a select number of schizophrenic patients. So although modafinil may be able to alleviate some symptoms of schizophrenia, it could potentially worsen others.

People commonly take modafinil for mental effects, which include:

Physical effects of modafinil are related to sympathetic nervous system activation. These effects include:

The long-term consequences of using modafinil are unclear. One study investigated the long-term effects on over sixty narcolepsy patients using modafinil and showed no significant changes in heart function, mood, weight, or nighttime sleep. However, the study only looked at the effects for six weeks, so it doesn’t account for any consequences that may take longer to develop.

As modafinil acts on the dopamine system, reduced activity in the prefrontal cortex could be a long-term side effect.

Furthermore, researchers have suggested that long-term use of nootropics, including modafinil, could lead to impairments in neuroplasticity, a biological process associated with learning and memory. The same group of researchers also suggested nootropics could cause long-term damage to the body’s natural sleep-wake cycles.

Adults with narcolepsy are recommended to take 200mg of modafinil a day, split between 100mg in the morning and 100mg at noon. 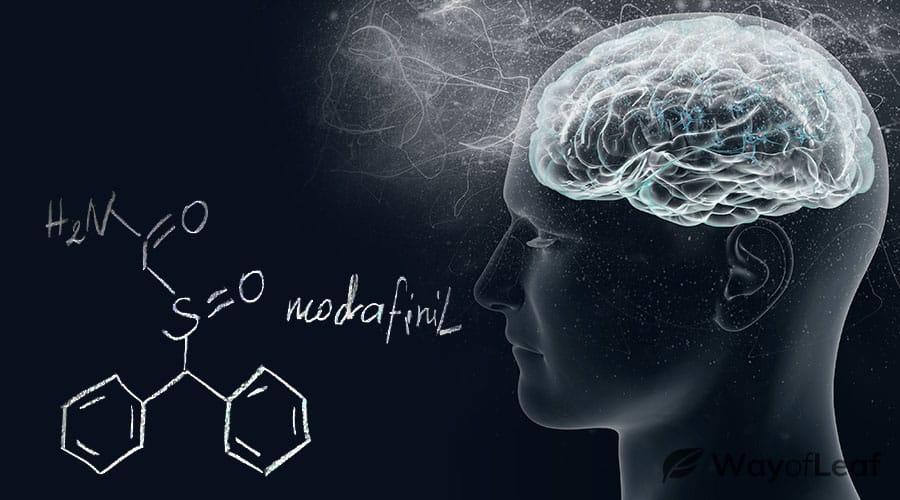 To date, the maximum modafinil dosage, known as the LD50, has never been reached. In one case study, the largest reported dose of 5000mg did not cause death. However, the person who took the dose reported:

The physical side effects of modafinil are mainly related to its stimulating role in the body. These side effects include:

Mental side effects of modafinil can include:

Cases of stimulants triggering psychosis and increasing pre-existing psychotic symptoms mean people with a family history of psychiatric illness should be cautious when taking modafinil.

Modafinil has been demonstrated to interact with certain enzymes, which affects the breakdown process of other drugs. Modafinil drug interactions may decrease the effectiveness of these drugs or cause adverse reactions.

If you suffer from a sleep disorder or another condition in which you experience fatigue or difficulty concentrating – you may be interested in speaking to your doctor about receiving a prescription for modafinil. If so, be sure to talk with your doctor about any safety concerns, including side effects and drug interactions.

Although there is some information about modafinil risks, the evidence on long-term health risks is still limited, meaning side effects from long-term chronic use may still be unknown.

Because of its unclear safety profile, it’s recommended to only use modafinil when necessary.