Astaxanthin is a pigment that naturally occurs in several different types of seafood but can also be bought as a dietary supplement in capsules, tablets, and powder.

Astaxanthin has antioxidant and anti-inflammatory effects that have led researchers to investigate its potential uses for improving human health.

Continue reading to learn more about this research and the science of astaxanthin.

Astaxanthin is a type of pigment – a naturally occurring colored substance – belonging to a family of chemicals called carotenoids. It can also be produced synthetically in a lab.

Astaxanthin is blood-red in color and is produced naturally by yeast fungi and freshwater microalgae. It’s because of feeding on astaxanthin-containing algae that certain animals, such as salmon, red trout, flamingos, and crabs, are red-orange in color. 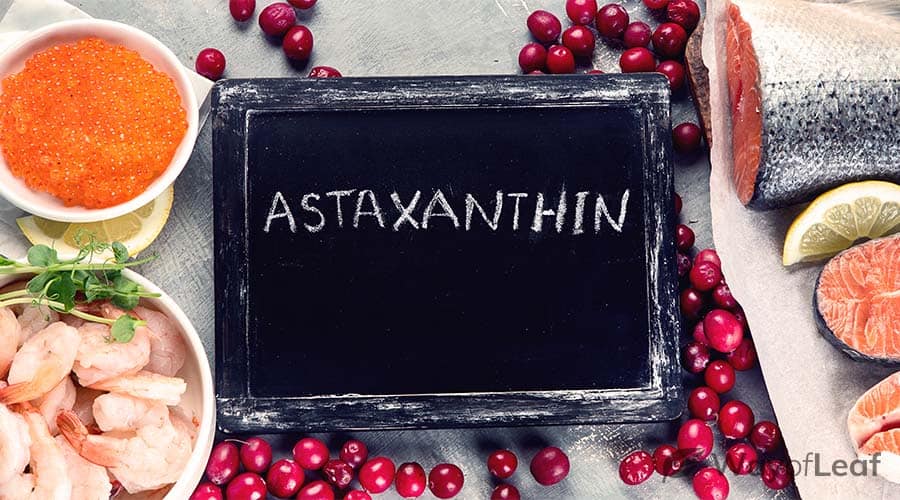 The colorful properties make astaxanthin popular in farming, where farmers use it to increase the brightness of their animal products, such as salmon, shrimp, and chicken egg yolks, to make them more appealing to consumers.

Astaxanthin has a unique chemical structure with two electrically charged groups on either side. This structure means it can fit well into cell membranes, where it can then control various activities inside the cell, including several antioxidant and anti-inflammatory reactions.

How Does Astaxanthin Work?

An antioxidant is something that combats the effects of oxidative stress. Oxidative stress is brought about by molecules called reactive oxidative species (ROS) that cause several harmful reactions inside cells.

Researchers have demonstrated that astaxanthin can combat oxidative stress by interacting with ROS to make them non-reactive. It can also “mop up” highly energized charges inside cells, preventing ROS from forming.

The immune system protects the body by attacking harmful microorganisms. It usually serves a protective function, but when it becomes overactivated, it can start attacking normal human cells, which can cause several health problems, such as rheumatoid arthritis and other auto-immune disorders.

Astaxanthin can counteract the effects of immune system overactivation by decreasing the production of different types of molecules.

Research has highlighted how astaxanthin can counteract the effects of immune system overactivation by decreasing the production of different types of molecules involved in triggering immune responses, such as macrophages and neutrophils.

Could Help Protect Against Heart Disease

Atherosclerosis is a build-up of fatty deposits on the walls of blood vessels, which can cause blockages in blood flow, leading to heart disease.

Evidence has also highlighted how astaxanthin can decrease blood pressure and so may counteract the damaging effects of high blood pressure on blood vessel walls.

The anti-inflammatory and antioxidant properties of astaxanthin mean it may not only be able to help protect against heart disease but reduce the risk of damage from heart disease.

May Have Cognitive-Enhancing Effects

Not only may astaxanthin help improve the health of nerve cells, but researchers have found it can also increase the growth of new nerve cells.

These effects mean astaxanthin might play an important role in neuroplasticity, the growth of new nerve cell connections, which are essential for learning and memory.

To demonstrate the cognitive benefits of astaxanthin, one clinical study investigated its effects on healthy adults who felt a memory decline. After 12 weeks of supplementing astaxanthin, the research participants significantly improved their composite and working memory.

Astaxanthin may also help reduce the risk of Alzheimer’s disease. For example, in a study on mice, researchers found astaxanthin could reduce the amount of amyloid-beta and tau, proteins involved in the pathogenesis of Alzheimer’s. Mice in the study who had astaxanthin also displayed a slower memory decline than mice who didn’t.

Astaxanthin may be able to help increase blood flow and circulation. One way it could do so is by increasing the sensitivity of mechanisms needed to relax and constrict blood vessels to control blood flow.

In one study, participants who had 6mg of astaxanthin each day for ten days showed a decrease in blood transit time, which is a measure for improvement in blood flow. However, because of the small number of participants in the trial, more evidence is needed to validate these effects.

Astaxanthin may be useful in treating visual disorders by increasing blood flow to the eyes and protecting eye cells from oxidative stress.

A study in mice found that astaxanthin could reduce the degeneration of retinal ganglion cells in mice with glaucoma. Astaxanthin was also found to reduce cataract development in mice with type 1 diabetes.

In one clinical trial, researchers gave men with infertility conventional treatment with either astaxanthin or placebo. After three months, astaxanthin increased sperm linear velocity, a measure of sperm movement, and pregnancy rates compared to a placebo.

An experiment on rats also found astaxanthin increased testosterone levels and testis weight and decreased levels of testicular MDA, a measure of oxidative stress associated with infertility in men.

May Be Helpful in the Treatment of Cancer

Experiments have demonstrated that astaxanthin can decrease the growth and migration of cancer cells, helping to reduce the risk of tumors growing and spreading around the body.

One study in mice also found astaxanthin was able to reduce carcinogenesis, which is how healthy cells turn into cancer cells. The researchers concluded this was likely because of astaxanthin’s anti-inflammatory effects.

Mild side effects caused by astaxanthin have included increased bowel movement and stomach pain, although reports of stomach pain have only been from higher doses. 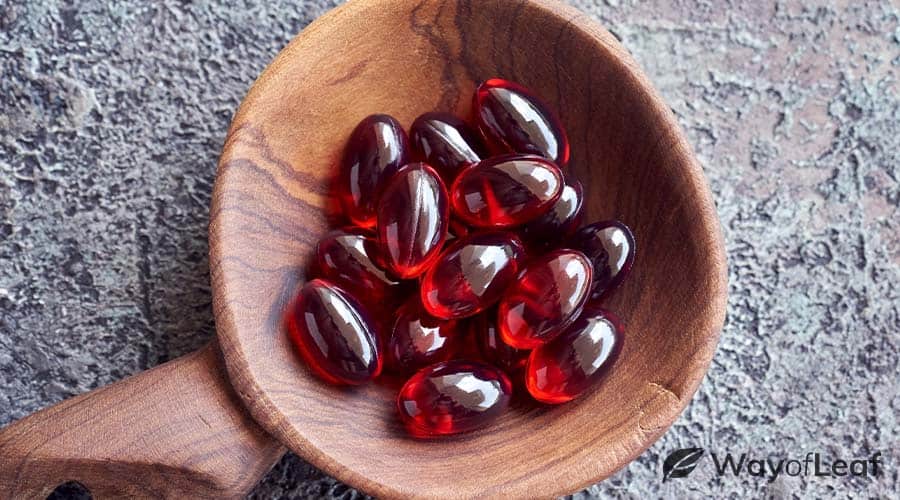 Experiments have also found that astaxanthin can interfere with the blood clotting process and, therefore, increase the risk of bleeding. In which case, patients with blood-based disorders or who are taking any blood-thinning medications should avoid using astaxanthin.

Furthermore, some people can be hypersensitive to carotenoids, including astaxanthin, which could cause an allergic reaction.

Consumers can obtain astaxanthin naturally from seafood in their diet. Food sources of astaxanthin include:

Wild Sockeye salmon has the highest known astaxanthin content at 38mg per kg.

For those on a vegetarian or vegan diet, there’s no need to worry as there are plenty of other ways of supplementing with astaxanthin.

There are several places online to find astaxanthin capsules and powders, which can be added to drinks and foods such as smoothies and porridge.

There are several places online to find astaxanthin capsules and powders, which can be added to drinks such as smoothies.

Most commercially available astaxanthin is derived from a type of yeast called Phaffia rhodozyma or algae called Haematococcus pluvialis.

Consumers can also buy krill oil supplements that are high in astaxanthin and also other healthy nutrients like omega-3 fatty acids.

There have been no published reports of astaxanthin overdose to date, and experiments on rodents suggest that extremely high doses of over 500mg/kg per day don’t cause toxicity.

However, because of the limited number of human studies, it’s difficult to determine whether high doses in humans could be toxic.

In clinical studies, researchers have used doses between 2-18mg with no significant adverse side effects, and study participants have demonstrated notable effects on fat levels and blood flow from 6mg.

Astaxanthin is a naturally occurring nutrient with antioxidant and anti-inflammatory properties that could make it a helpful treatment for several conditions.

Because most research on astaxanthin has been conducted on animals and isolated cells, more evidence is needed to determine its effects and safety on human health.