The 2018 Farm Bill officially legalized the cultivation of hemp in the United States. Farmers can apply for a license and grow industrial hemp with a maximum THC of 0.3%. Already, virtually every state has implemented a program, thus reducing America’s reliance on imported hemp.

However, the nation doesn’t yet grow enough to meet its vast needs. This article outlines a brief history of hemp cultivation in the United States and discovers where our hemp comes from.

Hemp Cultivation in the United States

Hemp was likely first introduced to North America in the early 17th century. Growing it was a legal requirement in some early colonies due to its vast array of uses. Several American presidents cultivated it, including George Washington. Also, a draft of the Declaration of Independence was written on hemp paper.

By the 20th century, it seemed as if America had embraced hemp. Research from the United States Department of Agriculture in 1916 showed that hemp produced four times more paper per acre than trees. However, pressure from different industries, including paper mills, led to the prohibition of hemp. The 1937 Marihuana Tax Act banned the cultivation of hemp in America.

The one-time billion-dollar crop was only confined to the sidelines for a few years. The American Government implemented the Hemp for Victory program during World War II. However, the last commercial hemp fields were planted in Wisconsin in 1957. The crop was then classified as a Schedule I substance as part of the 1970 Controlled Substance Act.

In 2007, a pair of North Dakota farmers received the first hemp licenses provided to Americans in half a century. In 2014, the Farm Bill allowed research institutions to begin pilot hemp farming programs. The 2018 version of the bill removed the plant from the list of controlled substances.

It is a victory for proponents of the hemp plant. Perhaps one day, the United States won’t need overseas hemp. However, as the program is only new, there remains a gap between what the nations requires, and what it produces.

How Much Hemp Does America Produce? 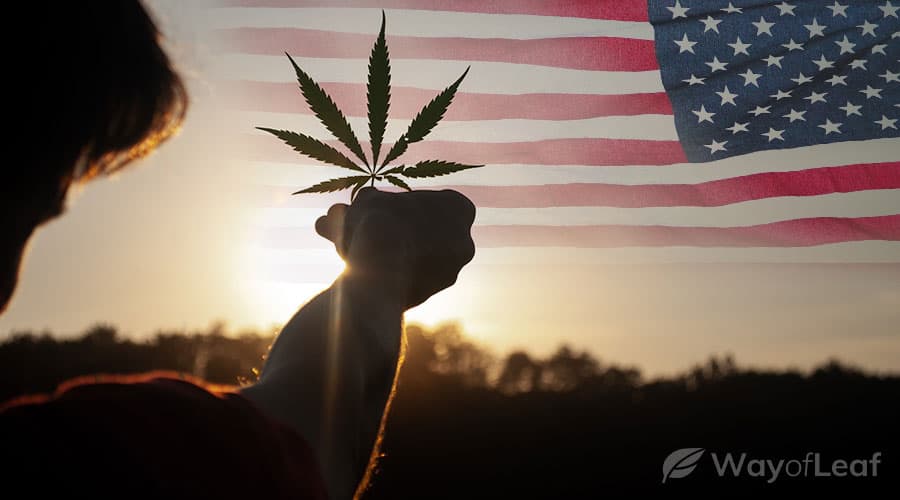 However, Hemp Benchmarks released data in August 2020, claiming that 400,000 acres of land were registered for hemp production by late July. This compared to 580,000 acres in 2019. The gap between licensed acreage and land that was used for hemp cultivation is vast.

There are already signs that the initial rapid spike in growth figures has not only ceased but is already going in the other direction. Major hemp cultivation states already see significant decreases. In Colorado, there were 80,000 licensed acres in 2019, but only 60,000 in 2020, for example.

Interestingly, although licensed hemp acreage fell 9% from 2019 to 2020, the number of growers increased by 27%.

What Problems Do Hemp Farmers Face?

Much of the hemp that American farmers grow is used for the CBD industry. However, the plant has thousands of other uses. The passing of the Farm Bill into law led to a huge surge in hemp growth. The trouble is, the crop isn’t quite the golden goose that many people think.

Growing it is even more labor-intensive than traditional crops. Many farmers lack the expertise, which has resulted in some expensive failures. Part of the reason for this revolves around attempts to cultivate it in unsuitable climates. Colorado, Oregon, and New York are among the best states to grow hemp.

However, places like South Dakota, Mississippi, and Idaho are not good options. This is mainly down to confusing legislation rather than poor growing conditions, however.

Places in the so-called ‘heartland’ of America have recorded less than impressive yields. The lure of earning up to $40,000 per acre has resulted in some poor decisions being made. Another problem involves the cost of processing and testing.

Unfortunately, farmers also find that thieves steal their crop in the belief it is cannabis. Investing in adequate security measures is something that many farmers can’t afford.

How Much Hemp Does America Need?

It is challenging to get data on the United States’ level of hemp consumption. We know that 64 million Americans have used CBD in the last couple of years. Since the CBD industry accounts for an estimated 80% of hemp consumption, it gives you a clue for demand.

There are approximately 25,000 uses for hemp in total. As a result, you might assume that demand is outstripping supply. However, American farmers are finding it tough to unload their hemp.

Does this mean America already produces enough? The answer is ‘no.’ One of the main reasons why U.S. farmers find it hard to sell their crops is because of competition from established importers.

There is likely a greater level of demand than what American farmers alone can supply. However, until the nation reduces its overseas purchases, the market will be flooded with unwanted hemp. This, in turn, drives the prices down and will undoubtedly lead to financial ruin for many farmers.

How Much Hemp Does the United States Import?

America didn’t import much hemp before 2010. However, as individual states began legalizing hemp and cannabis, the government was forced to rethink its approach. There was also plenty of evidence that hemp had an array of uses.

For a long time, China supplied the largest amount of hemp to the United States. Indeed, it was the case as recently as 2015. However, America soon turned to its northern neighbor, Canada. By 2019, the nation imported almost 90% of its hemp from Canada.

The relatively low cost of Canadian hemp, coupled with its high quality, means that American hemp farmers face an uphill struggle. They may find it necessary to begin exporting their hemp instead of competing on the crowded battlefield.

Final Thoughts on Where America Gets Its Hemp From

On the face of it, the legalization of industrial hemp via the 2018 Farm Bill is wonderful news for the hemp industry. It no longer has to rely on imports as the United States can produce more than enough for its needs.

However, the import market is so well-established that American hemp farmers have a major battle just to make a dent. They also face a host of problems in trying to generate successful harvests. In some cases, it is a combination of rushing to make money and a lack of knowledge of how to cultivate the crop. In others, there are difficulties due to state laws.

Many farmers are finding that growing hemp isn’t necessarily the ticket to a fortune that they hoped. America needs hemp, but it doesn’t necessarily require it to be home-grown.

Article Sources:
IMKgPC9zcGFuPjwvcD4KPHVsPgo8bGk+PHNwYW4gc3R5bGU9InRleHQtZGVjb3JhdGlvbjogdW5kZXJsaW5lOyI+PGEgaHJlZj0iaHR0cHM6Ly9uZXdzLm1lZGljYWxtYXJpanVhbmFpbmMuY29tL2hlbXBzLWN1cnJlbnQtbGVnYWwtc3RhdHVzLXUtcy8iIHRhcmdldD0iX2JsYW5rIiByZWw9Im5vZm9sbG93IG5vb3BlbmVyIG5vcmVmZXJyZXIiPm5ld3MubWVkaWNhbG1hcmlqdWFuYWluYy5jb20vaGVtcHMtY3VycmVudC1sZWdhbC1zdGF0dXMtdS1zLzwvYT48L3NwYW4+PC9saT4KPGxpPjxzcGFuIHN0eWxlPSJ0ZXh0LWRlY29yYXRpb246IHVuZGVybGluZTsiPjxhIGhyZWY9Imh0dHBzOi8vd3d3LmNhbm5hbGF3YmxvZy5jb20vZ290LWhlbXAtaXRzLXByb2JhYmx5LWltcG9ydGVkLyIgdGFyZ2V0PSJfYmxhbmsiIHJlbD0ibm9mb2xsb3cgbm9vcGVuZXIgbm9yZWZlcnJlciI+Y2FubmFsYXdibG9nLmNvbS9nb3QtaGVtcC1pdHMtcHJvYmFibHktaW1wb3J0ZWQvPC9hPjwvc3Bhbj48L2xpPgo8bGk+PHNwYW4gc3R5bGU9InRleHQtZGVjb3JhdGlvbjogdW5kZXJsaW5lOyI+PGEgaHJlZj0iaHR0cHM6Ly93d3cubGF0aW1lcy5jb20vb3Bpbmlvbi9vcC1lZC9sYS1vZS1maW5lLWhlbXAtbWFyaWp1YW5hLWxlZ2FsaXplLTIwMTQwNjI2LXN0b3J5Lmh0bWwiIHRhcmdldD0iX2JsYW5rIiByZWw9Im5vZm9sbG93IG5vb3BlbmVyIG5vcmVmZXJyZXIiPmxhdGltZXMuY29tL29waW5pb24vb3AtZWQvbGEtb2UtZmluZS1oZW1wLW1hcmlqdWFuYS1sZWdhbGl6ZS0yMDE0MDYyNi1zdG9yeS5odG1sPC9hPjwvc3Bhbj48L2xpPgo8bGk+PHNwYW4gc3R5bGU9InRleHQtZGVjb3JhdGlvbjogdW5kZXJsaW5lOyI+PGEgaHJlZj0iaHR0cHM6Ly9jYXNldGV4dC5jb20vY2FzZS9oZW1wLWluZHVzdHJpZXMtdi1kcnVnLWVuZm9yY2VtZW50LWFkbWluIiB0YXJnZXQ9Il9ibGFuayIgcmVsPSJub2ZvbGxvdyBub29wZW5lciBub3JlZmVycmVyIj5jYXNldGV4dC5jb20vY2FzZS9oZW1wLWluZHVzdHJpZXMtdi1kcnVnLWVuZm9yY2VtZW50LWFkbWluPC9hPjwvc3Bhbj48L2xpPgo8L3VsPgo8cD48c3BhbiBzdHlsZT0iZm9udC13ZWlnaHQ6IDQwMDsiPg==
Related article
How to Grow Industrial Hemp: Is It Legal?

What Can You Use Hempcrete For?

Is it a good option?

1
4 min read
Join the discussion
TOC
Premium
Your subscription has ended
If you love cannabis and want to support our site, join WayofLeaf Premium today and unlock
Best of all, part of your membership fee will go towards supporting the fight to legalize cannabis.
Sign Up for WoL Premium
No thanks, I can't afford it
I already have an account
×
Login in to your premium account